The Flagstaff Eagles couldn't ask for a better start to the annual Pepsi Holiday Tournament on Thursday morning.

The 4A Conference Eagles boys squad routed the 2A Sedona Red Rock Scorpions 89-50 behind a barrage of 3-pointers. Despite the relatively early 10 a.m. tipoff, the Eagles were awake and ready to go.

Flagstaff went 15 of 30 from behind the arc on their home court, led by four treys from Layton Hagerman and three from Brandon Foster, as the Eagles put up their largest margin of victory of the season.

The hot shooting was something Eagles head coach Nick Walton was hoping for, as his team had been in a bit of a slump the past couple games. All it took was to see a handful of shots find the bottom of the net to ignite a more consistent performance.

"If we got open looks, I told them shoot it, and it's good to finally see the ball fall through the hoop a little bit," Walton said. "We didn't shoot the ball really well on Tuesday, so it was a point of emphasis the last week. We got some extra shots up, so it was good to see some fall."

Flagstaff hit five 3s in the first quarter. The Eagles made each of their first five attempts from long range, with the only miss of the opening quarter being a contested heave at the buzzer.

Nick Sneezy hit a pair of 3s in the first, and later in the quarter went 1 of 2 on a trip to the foul line to finish up his scoring for the morning with seven points.

The Eagles and Scorpions played a bit closer in the second, with the Eagles outscoring Sedona 17-15. The game took a faster pace and Sedona forced some turnovers off the Flagstaff reserves.

But the Eagles dominated the second half, outscoring Sedona 45-25 to extend the lead. The Eagles scored 26 in the third behind eight different scorers to push the tempo and find wide-open shots.

A total of 15 Eagles scored in the win, while seven of those Eagles contributed in the 3-point marathon. Hagerman led the way in scoring with 12 -- all from behind the arc -- followed by Foster with 11 and 10 from Kurt Brown to round out the double-digit scorers for Flagstaff.

Giving time to players who don't see the floor much was also a massive accomplishment, Walton said. He rolled out the reserves for much of the second half but never let up until the game was essentially over late into the fourth.

"We got everybody in," Walton said. "Some guys got some extra minutes -- which was good -- and to get them extra work and extra game time and experience. An all-around good effort."

Christian Lancaster recorded a team-high 23 points, Sneezy and Josh Lenners each added eight, and Flagstaff used a second-half surge to beat Arizona Lutheran, capping off the first day of the holiday tournament in the War Memorial Gymnasium with a win for a 2-0 start of pool play.

Lancaster, Sneezy and Lenners all finished with two 3-pointers made for the Eagles, who faced a 31-27 deficit at halftime. Lancaster had 15 points alone in the third quarter, during which the Eagles went on a 17-2 run to take a 43-33 lead they would extend as the game continued to unfold.

Walter Downs added 10 points for Flagstaff, which outscored its 2A opponent 28-7 in the third quarter. The Eagles trailed by as much as seven in the first half.

"I think that's what separates us this year, is we have different guys who can step up and contribute," Walton said.

Nick Morrow finished with six points and faced foul trouble for most of the night outing.

Lancaster sparked the third-quarter run out of the halftime gates with a 3 and it ended with him taking a steal coast to coast for the layup.

Tyson Biciolis had 25 points for the Coyotes, and Flagstaff slowed him down in the second half by limiting his trips to the foul line and opportunities to drive.

"We knew if we just kept the pressure up, kept the intensity up, that eventually the altitude would set in and we can start running," Walton said.

Valley Lutheran lost earlier in the day to Snowflake, Flagstaff's next opponent.

Flagstaff's first game of the second day of action is set for a 2:30 p.m. tip against the 3A Lobos.

Coconino made fast work of 2A Greyhills Academy to open tourney play.

The 4A Panthers kept the Knights scoreless in the first and fourth quarters en route to a dominant win. Aidan Roig led the way in scoring with 19 points, including a trio of treys.

A dominant second half sparked Coconino to a double-digit win over 4A Grand Canyon Region rival Lee Williams in the teams' second games of the day.

The Panthers outscored the Volunteers 29-19 in the second half to win, despite a rough night from behind the arc. The Panthers finished just 2 of 12 from deep, but found ways to score off 12 steals and Lee Williams miscues.

Panthers head coach Mike Moran noted that once his team started working the ball inside to Will Mcmenamin and Hayden Nez, the offense began to flow and the points started coming.

"We attacked their bigs and Will had a big game for us," Moran said. "I'll tell you what, he is just barely learning the game. He's got a lot to learn."

Late in the fourth on a fast break, Mcmenamin took a pass from Preston Olney and slammed down a dunk to put Coconino up by its biggest margin of the night at 50-30 and force a timeout from the Lee Williams bench.

The dunk got the crowd into the game as Coconino coasted with the lead the rest of the way.

Mcmenamin finished with nine points and six boards, and played a part in getting Lee Williams' bigs into early foul trouble. Preston Olney finished with a team-high 19 points, including a perfect 6-of-6 day at the foul line, along with six boards, three assists and three steals.

The Panthers finished the opening day 2-0 and will take on Basis Flagstaff and Winslow on Friday at 11:30 a.m. and 5:30 p.m., respectively.

The 3A Winslow Bulldogs opened up a 30-14 first-half lead over the 1A Basis Flagstaff Yeti in holiday tourney opener for both teams.

Basis cut the lead down a bit in the second, holding the Bulldogs to just five points in the third -- to the Yeti nine -- and kept the fourth quarter to a 12-12 tie.

Winslow connected on just two shots from behind the arc all game, both coming from Josiah Montgomery in the first half. Zachary Wagner led Winslow with 10 points in the win. Marcus Dufek led Basis with 13 points while Noah Allen added in nine, including a 3 in the third quarter.

The Yeti couldn’t get going against Lee Williams, falling behind 43-16 at the end of the first half in a loss.

The Yeti dropped their second game of the tournament’s opening day with the loss while Lee Williams opened with a win before falling to Coconino in its nightcap.

Dufek again led Basis with 18 points on a 5-of-8 day from the free-throw line. Allen was the only other Yeti to score in the second half besides Dufek -- scoring all five of his points in the fourth quarter.

On the boys side of things, Sedona lost to Green Valley of Nevada, 73-40 and Winslow topped Greyhills, 74-19.

The Basis Yeti, Coconino Panthers and the Flagstaff Eagles all played a pair of games to start the Holiday Tournament Thursday at Flagstaff Hi… 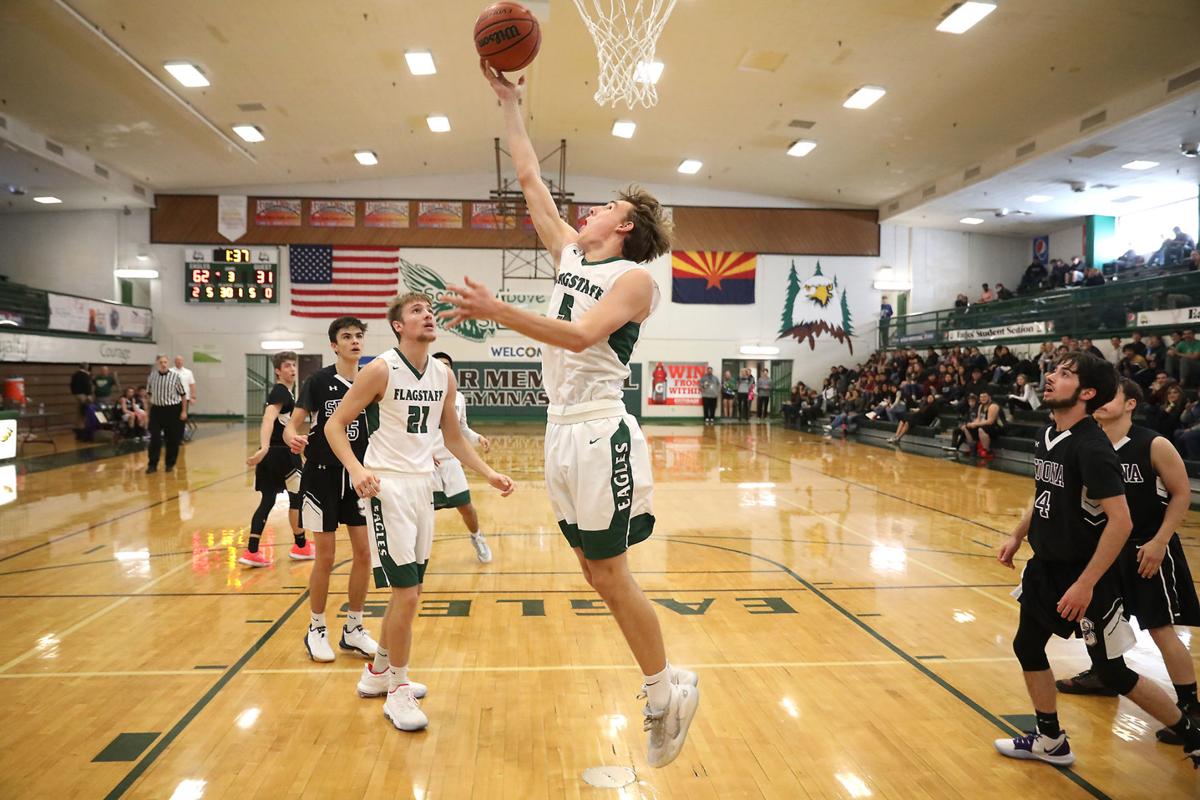 Flagstaff’s Nick Miller (5) goes for a layup against Sedona Thursday morning during the opening day of the Pepsi Holiday Tournament at Flagstaff High School. 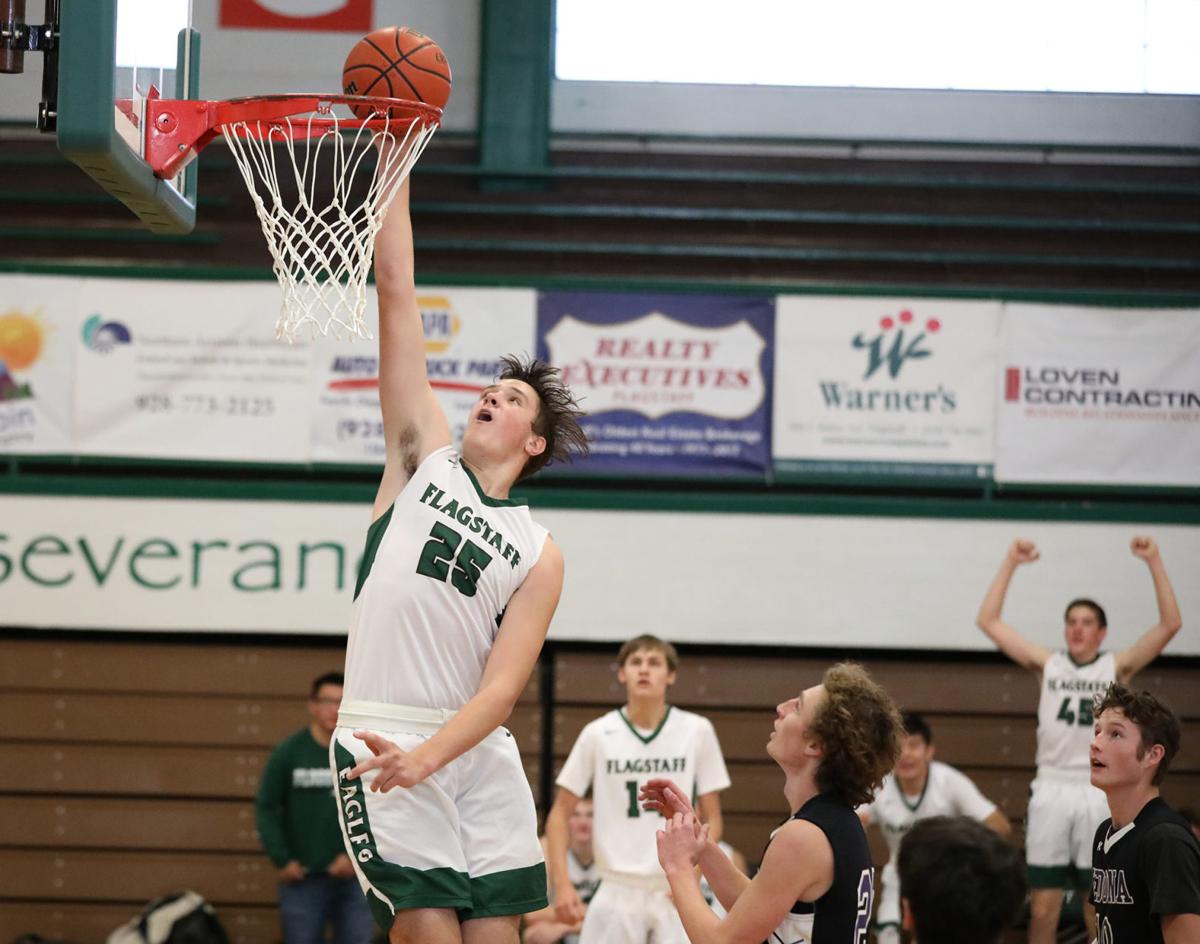 Flagstaff’s Nick Morrow (25) takes the ball to the net Thursday morning against Sedona during the Pepsi Holiday Tournament at Flagstaff High School. 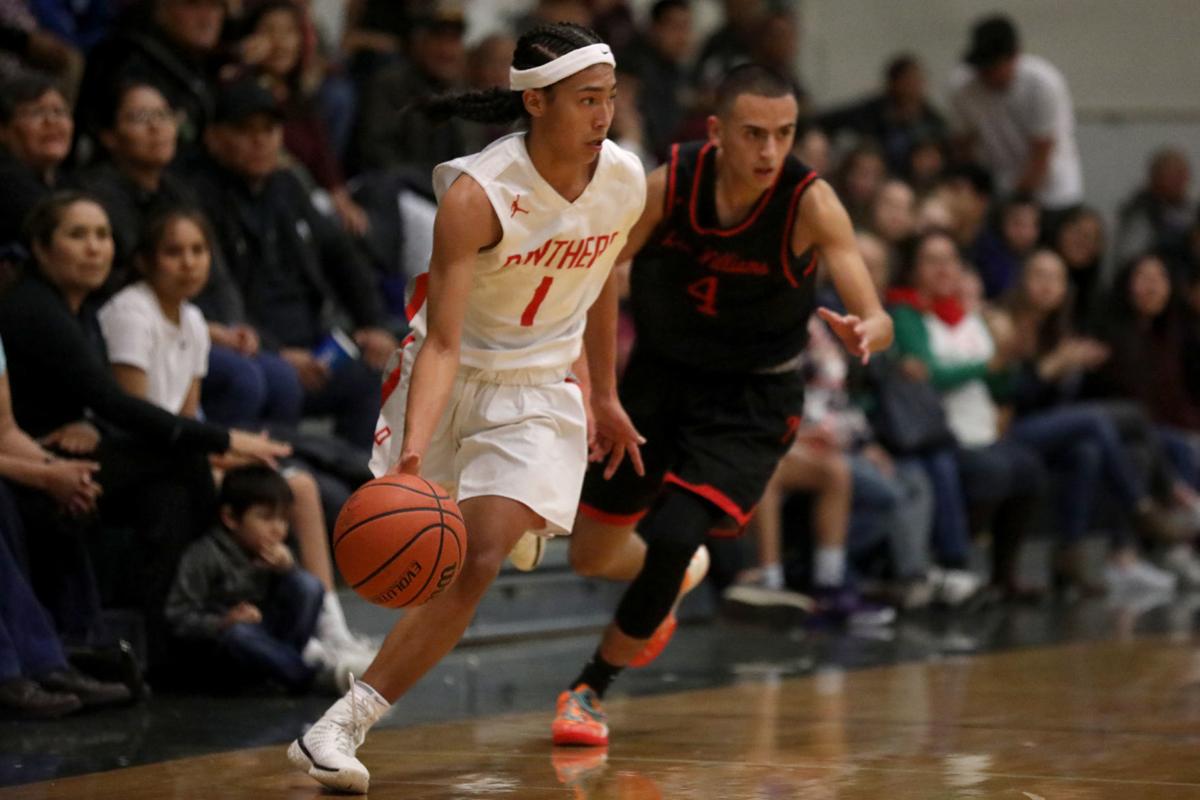 Coconino guard Preston Olney (1) drives toward the basket after stealing the ball during Thursday night's game against Lee Williams in the Holiday Tournament at Flagstaff High School. 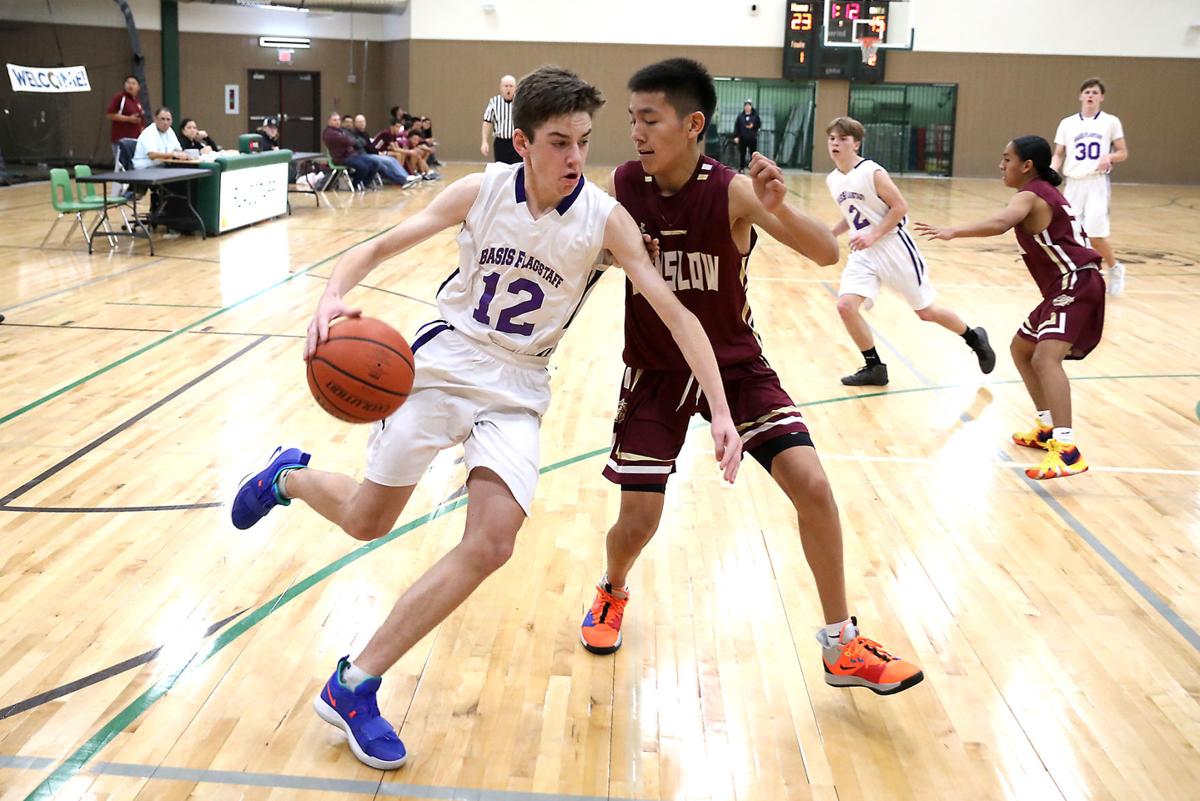