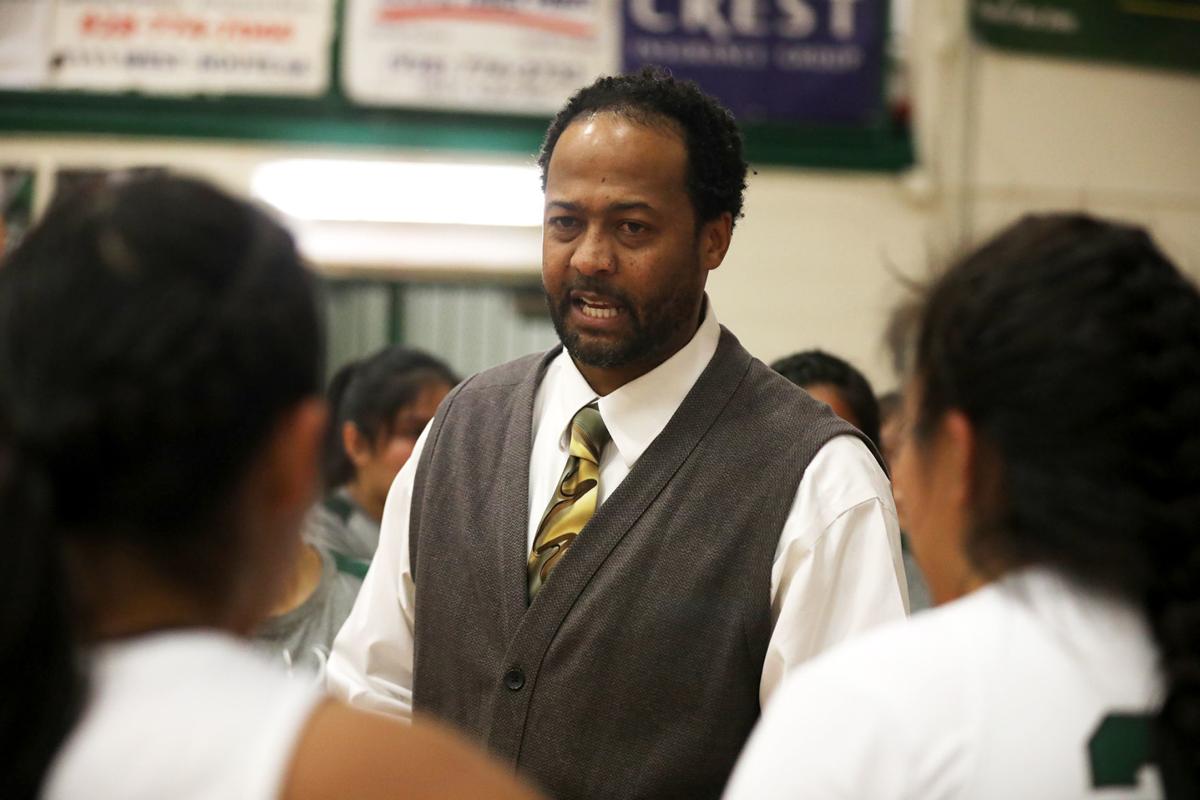 Flagstaff Eagles head coach Tyrone Johnson talks with his players during a timeout against Estrella Foothills in the 2018 season at Flagstaff High School.

Flagstaff Eagles head coach Tyrone Johnson talks with his players during a timeout against Estrella Foothills in the 2018 season at Flagstaff High School.

In fact, he said it's been "amazing."

The seniors have the task of leading a talented young Eagles roster this season, and so far they've shown that they are up to the challenge.

Three of the five total seniors on this season's roster have varsity experience in Emma Doskicz, Rebecca Encinas and Charleigh John. Doskicz, a consistent threat at 3-point range who can handle the ball, returns for her fourth and final year playing varsity, finishing last season as the team's second-most productive player in scoring at 11 points per game to go with two steals per game.

“It’s a blessing having someone like Emma and Rebecca, who both really step up and lead on the court and in the classroom," Johnson said after Thursday's practice.

There were a lot of new faces in the gym for preseason practices, including seniors Devynn Hatathlie and Oniyah Shirley from volleyball. And Flagstaff has just five total returning to the team from a year ago, having lost a big chunk of players to graduation.

The biggest task will be to get the ball rolling early, as the new-look Eagles need to gain chemistry and conditioning.

“I think we have got some potential, and so I am excited about that. Not just game day potential, but we have potential to have some real fun and competitive practices as we start getting into this," Johnson said.

A key returner to the team is sophomore Gracelyn Nez, also a key member to the volleyball team. She enters the 2019-20 winter season after leading the Eagles in scoring last year at 12.4 points per game as well as leading in rebounds at 8.4 per game.

Nez, who also led the team in steals last year on averaging 2.7 an outing, earned 4A Conference honorable mention last season to go with being named the 2018-19 Grand Canyon Region Offensive Player of the Year.

Meanwhile, Encinas also has a bigger role this season as well.

“She is going to be more like our Draymond Green-type player. She’ll do a little everything defensively and offensively -- she can push the ball, score at the basketball," Johnson said.

The Eagles won the region on a 12-0 mark last season and finished its regular season a year ago at 16-3. They beat Rio Rico at home in the first round of the 4A state tournament and lost in the next round to Seton Catholic Prep.

The new and young Eagles will get a taste of tough basketball early, as Flagstaff opens on Tuesday at home against Winslow before playing Seton Catholic on Dec. 6 for a road game.

In addition to the three freshman Johnson carried this season, all of the juniors are new to varsity. Right now, FHS has 18 total on the roster.

“It may take us a few games to really figure it out at the varsity level,” Johnson said.

Johnson said some of the younger players might have a chance to play a lot of minutes and help the team fill in holes left open from last year's seniors. With the loss of Josephine Faull in the paint after she was second on the team in rebounding last year, freshman transfer Miyah Verse could spend some time around the rim for the Eagles early on.

“She has good basketball IQ and she can cover some space,” Johnson said of his new big.

Meanwhile, some of the new additions could help the team run more of a tradition point guard on the court, leaving Nez and Doskicz chances to do even more with their own games. One of those guards who could run point is freshman Jasmynn Tsosie.

Tuesday's tipoff at Flagstaff High School is set for 7 p.m. against the Bulldogs.