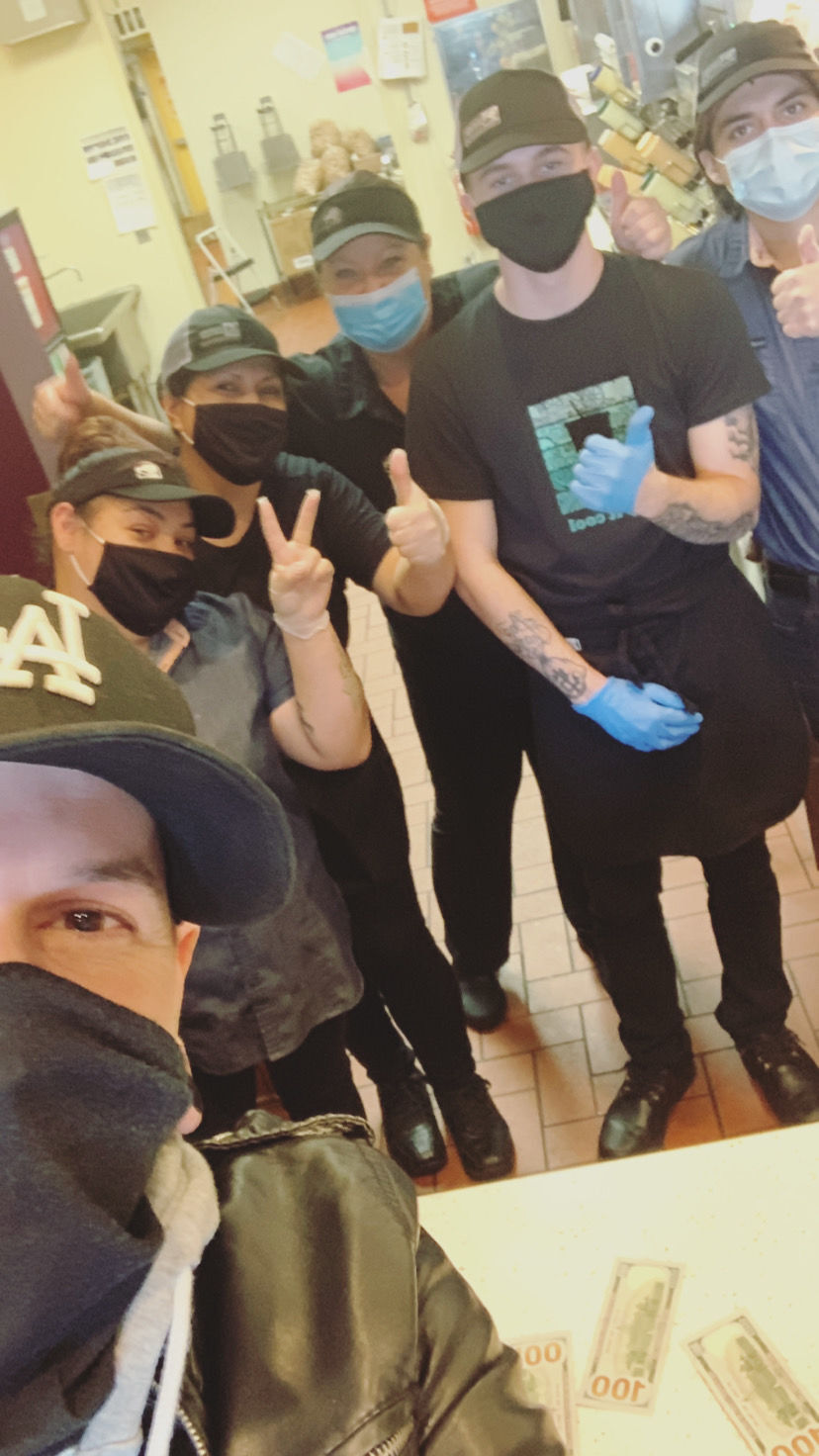 Former Flagstaff resident Shan Dan Horan (foreground) poses for a selfie with the five Taco Bell workers in Sacramento he gifted a total of $500. 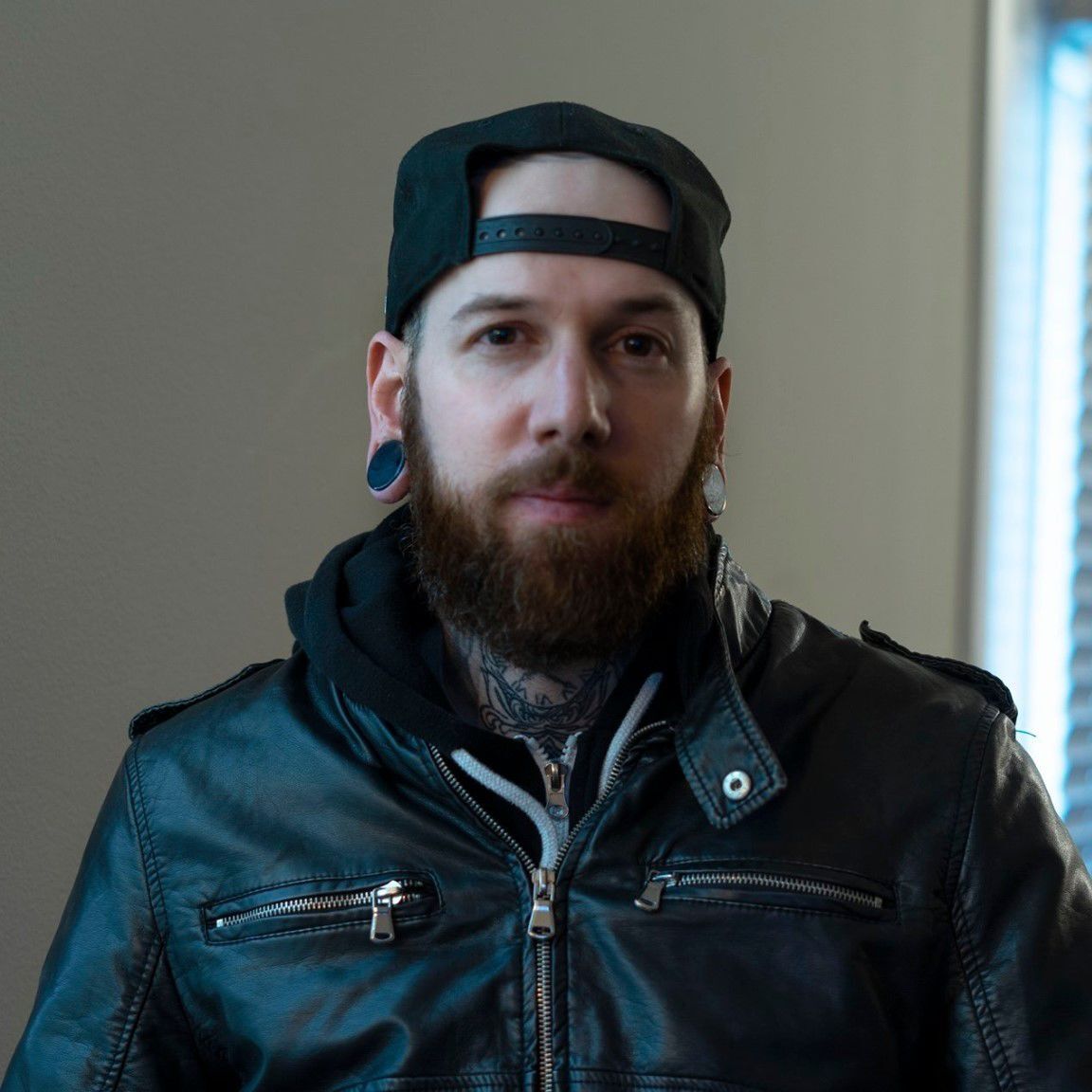 Shan Dan Horan, who grew up in Flagstaff and now is an executive with Republic Records in California, marked the 20th anniversary of getting held up at gunpoint while working at a Flagstaff Taco Bell by giving five Taco Bell workers in Sacramento $100 each.

No, he’s not hankering for a toasted cheddar chalupa, per se. He’s thinking back to 20 years ago when, as a 16-year-old saving for college and for equipment for his band, he was working the drive-thru window at a Flagstaff Taco Bell.

Near closing time, two masked men entered, toting guns. One robbed the safe, and the other kept the barrel of a gun pressed against Horan’s temple throughout. The traumatic episode made quite an impression on the teenager, and its memories stuck with him in the years since, rearing up seemingly unbidden every Dec. 14, the anniversary of the robbery.

This year, when the date rolled around, Horan decided, spontaneously, to change the narrative, to have himself remember his erstwhile Taco Bell employment in a more positive light. So, he walked into a Taco Bell in Sacramento, where he now lives, and not only ordered a combo but rewarded the workers behind the counter with a gift. He gave five people $100 each, telling them his story and also advising them to enjoy their families during the holidays.

Horan can afford the gesture. He’s been in the music industry for more than a decade, first running several independent labels and now working for Republic Records, which boasts Post Malone, Taylor Swift and The Weeknd among its stable of artists.

But even now, Horan considers Dec. 14 as his “Life Day,” when he could have been killed had the gunman pulled the trigger but instead spared him an early passing.

“What I did wasn’t premeditated at all,” Horan, a graduate of Flagstaff Arts and Leadership Academy, said by phone from Sacramento. “That incident in Flagstaff was pretty intense and dramatic and it stuck with me. So, day of, I was thinking that I’d rather not reflect on this day every year in such a negative way.

“As I was ordering, I watched the people there (at Taco Bell). They were working so hard and were so nice. They told me, ‘Hey, have a nice day.’ So I just decided, you know, I’m going to tip these guys $100 apiece. Now, when I look back, I’ll remember the good deed versus the original trauma.”

Though Horan said the incident is no longer traumatic, the details remain seared into his cerebral cortex. He was working the night shift, as usual, after school let out, at a Taco Bell that then was located at the top of Humphreys Street, near Bashas’. He and the manager were just about to close up around 10:30, when the two men burst in.

“I had a weird feeling in my stomach right before,” he recalled. “I can’t explain it. I looked over to my left, and two individuals, one in a ski mask, one in a paintball mask, come in with guns. One guy immediately rips the thermostat off the wall because I think he thought it might be a camera or alarm or something. One took ahold of the manager, put a gun to his head and made him open the safe. The other guy came around back, put his gun to my face, cocked it and said, ‘If you move, I’ll kill you.’ I got down on the ground. I still remember, very vividly, the red brick flooring there, being that close to it.”

Time seemed to come to a standstill, and Horan cannot recall exactly how long the incident took.

“Toward the end they said, ‘We’re going to wait outside for 10 minutes. If any of you move or try to make calls, we’re going to come back in here and execute everyone.’ The brutality of it, man. This was not some scared person coming in and saying, ‘Give me your money;’ it was calculated and methodical stuff. My life didn’t flash before my eyes or any of that stuff. It was more of a blank, helpless feeling that you can’t do anything and you are not in control anymore. You don’t have the free will to leave. It’s a scary feeling to be helpless like that and become a victim of sorts.”

Police never made an arrest in the case. Though shaken, Horan soon shook it off and got on with life.

“The silver lining is,” he said, laughing, “I got to skip school the next day and became a local celebrity at school.”

Horan said his philanthropic gesture helped ease the trauma. Employees at the Sacramento Taco Bell certainly welcomed it. One worker, Jordin Hines, told Sacramento TV station CBS 13: “A couple of the employees have kids and stuff that they need to take care of, and I’ve been trying to save up and fix my car. (Horan) definitely has a good heart. Now, I feel like I got to do the same thing when I get in a better position.”

Will this become a yearly ritual for Horan? He’s not sure.

“I might or might not,” he said. “It is cool, so maybe I will start doing it. All I know is, I was in a weird head space that day.”

A violent insurrection in the nation’s capital Wednesday may have taken place on the other side of the country, but the tremors were still fel…

The continuing tale of Jordan, the deaf dog

The woman called first, before driving in from Williams. Said she had a dog she needed to give up for adoption, just a puppy. He was wild and …

Dan Musselman, newly named police chief for the Flagstaff Police Department, has high hopes for the department during his tenure.

On Jan. 1, Fourth Street’s newest business opened its doors to the public. Fourth Street Vintage, owned by Laura and Bill Buehler, is located …

Former Flagstaff resident Shan Dan Horan (foreground) poses for a selfie with the five Taco Bell workers in Sacramento he gifted a total of $500.

Shan Dan Horan, who grew up in Flagstaff and now is an executive with Republic Records in California, marked the 20th anniversary of getting held up at gunpoint while working at a Flagstaff Taco Bell by giving five Taco Bell workers in Sacramento $100 each.