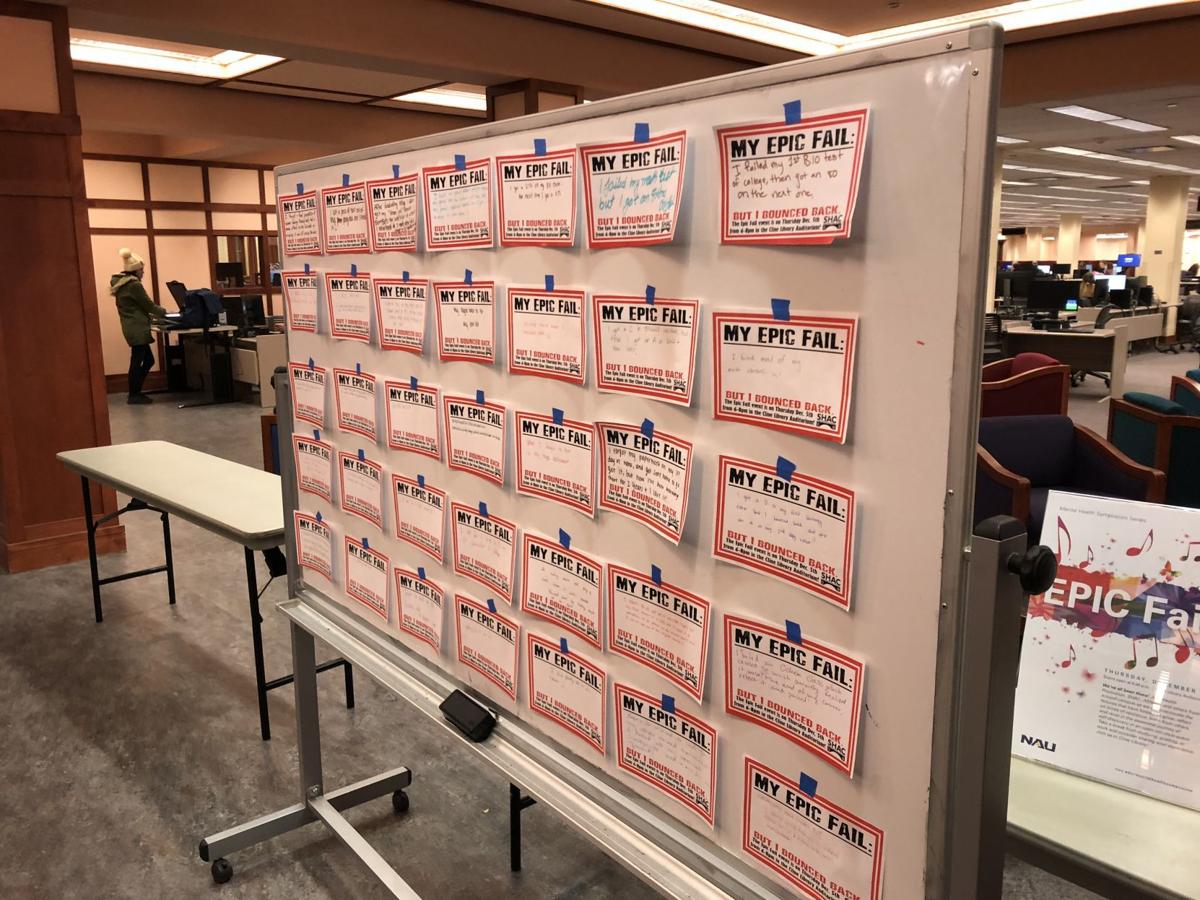 A white board at NAU's Cline Library lets stressed-out students share their "Epic Fails" and what they learned from their mistakes. 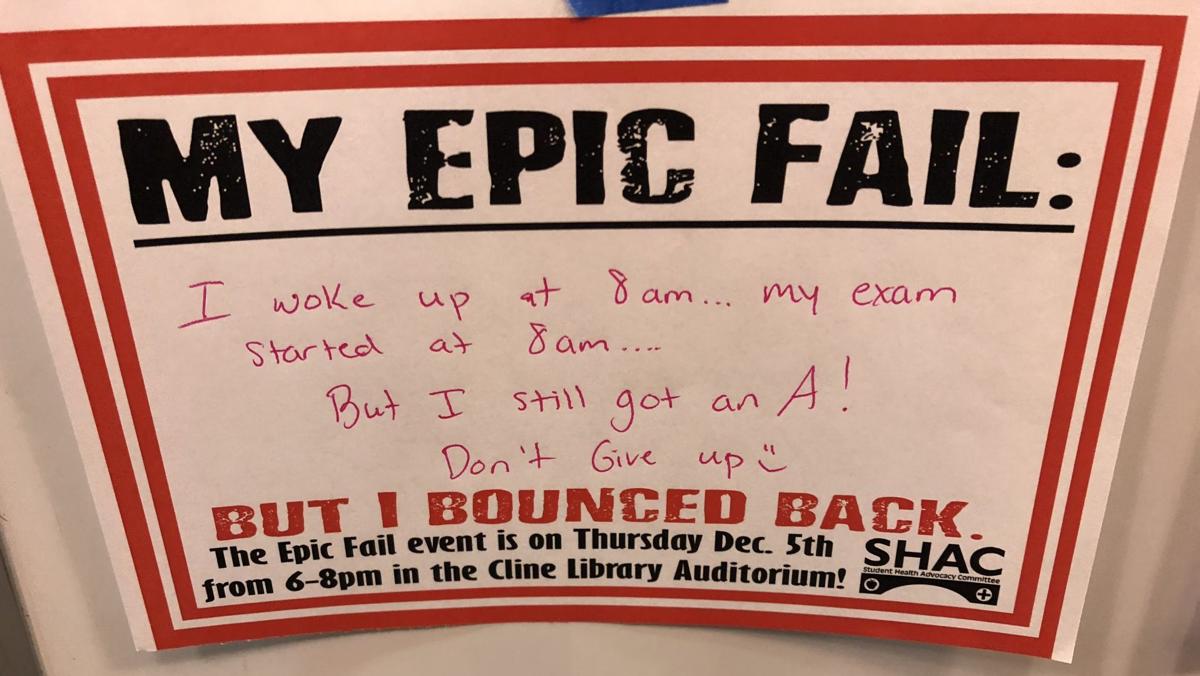 A student shares an "epic fail" regarding finals at NAU, in order to give others hope they can overcome mistakes.

A white board at NAU's Cline Library lets stressed-out students share their "Epic Fails" and what they learned from their mistakes.

A student shares an "epic fail" regarding finals at NAU, in order to give others hope they can overcome mistakes.

On Thursday night, at the height of “Reading Week” at Northern Arizona University, the collective stress at Cline Library seemed palpable, nearly oppressive. Heads bowed over books as if in supplication, faces squinched in a rictus of concentration, jiggling legs under tables — all were physical manifestations of the anxiety to come during finals week.

Yet, just across the way, in Cline Auditorium, laughter and applause could be heard, its incongruity perhaps lost on those bearing down for marathon study sessions.

There, about 30 students, as well as assorted university faculty and staff members, gathered for an event with a provocative title, Epic Fail. Part of NAU’s ongoing Mental Health Symposium Series, the event was a free-flowing, open-mic cathartic purging of people’s past failures, academic and otherwise.

It was meant not to mock but rather disarm the shame people feel when, well, they have epically failed in one way or another. Such a public airing of one’s transgressions, the organizers say, makes a student not feel alone in harboring such emotional baggage, enabling them to purge the past and learn from the experience, to not only survive failure but thrive thereafter.

Judging by the participation in Thursday’s event, Epic Fail was certainly not an epic failure. In fact, by night’s end, the crowd shuffled out smiling and stuffing themselves with cookies and hot cocoa, fortified for finals.

Hanging out near the back of the auditorium, but eventually grabbing the microphone herself to share her own litany of failures, was Megan Gavin, NAU’s director of counseling services. After telling the assemblage about some minor fails in her past — driving her grandmother’s Chevy Chevette into a median and blowing out the tires, getting hauled into the police station for throwing water balloons — Gavin told of an episode from her graduate school days.

“As a master's student,” she began, “I learned that I should not cry harder than my clients during a session. It’s really not helpful. I was really excited to talk to this fabulous couple. It was our first session. I had had a fight with my partner that morning, and (the couple) had also been fighting. And their demographic really matched mine.

“So I immediately turned their story into mine and sobbed throughout the whole session. I could barely collect myself. I think they were comforting me more than I helped them. You won’t be surprised to hear that they never came back. And what I learned: You’ve kind of got to check your own self at the door. Be yourself and be real, but you can’t cry harder than they do.”

Upon finishing, the crowd clapped for Gavin, not in appreciation of a funny anecdote, but in having the courage to share and gain insight from one of the less stellar moments of her academic career.

Later, Gavin said that events such as Epic Fail provides a healthy outlet of stressing students. She said the university holds monthly symposiums on mental health, emphasizing dealing with problems before a student could become overwhelmed by them.

“The (university’s) Student Health Advisory Committee and another group of students said, ‘Wouldn’t it be great around finals to do something like an Epic Fail to normalize struggle and normalize failure, especially in this world where people don’t always show that side of themselves?’” Gavin said. “It’s nice to have a public event where people can literally be applauded for their failures.

“(Mental health) is a national issue on campuses; it’s not just NAU, and the more creative we can be as to how to address it will help.”

It’s not as if those students in attendance were eager to share their worst moments. The night started off slowly, but once a few brave souls bared their burdens, it was as if the emotional floodgates had been opened. People were beckoning for the mic.

There was the young woman is an oversized hoodie who told a comic yet relatable tale about how she “totally failed” in her first biology lab. The first week, she showed up in open-toed shoes, a no-no. The next week, she left her cell phone on the bus and had to sprint after it for seemingly forever before the doors opened and a guy handed over the phone — whereupon she vomited from the effort.

There was the straight-A student who spaced out and forgot she had an online final for a psychology class and ended up, even after pleading with her professor via email, seeing her grade plummet from 98% to 89%.

There was the guy in a bright sweater who, on a solo road trip in Utah, got his car stuck in the sand for four hours, had no place to spend the night,  got rescued by good Samaritans, then got stuck in the sand two more times.

And there was the woman, a rock climber, who was rappelling down at a popular bouldering site, lost control and fell, derriere-first, into a patch of cacti. She had to take off her pants to remove cactus needles, then tie a jacket around her waist and hobble a half-mile back to her car.

Indignities and mortification, all. But the organizers made sure that those sharing stories stressed how they survived the incidents and grew as a person. Denise Ocampo, secretary of NAU’s Student Health Advocacy Committee, shared her own struggles in a physics class to show that not everyone will ace every class.

“This is to tell people, ‘Hey, it’s OK to fail and what matters is how you learn from that,’” Ocampo said afterward. “Especially in college, everybody wants to be perfect and get perfect grades, but that’s just not the reality.”

Meanwhile, back in the library proper, row upon row of students still sat hunched over textbooks or slouching into a laptop. But near the checkout desk, the event organizers had put up a whiteboard where people could post their own, anonymous, epic fails.

Here’s just one entry: “I forgot my presentation at home during Reading Week. Had a panic attack in class, but ended up winging it and still passing the class.”

When Lyle Becenti was a teenager growing up in Naschitti, New Mexico, a small community on the Navajo Nation, he had not expected his grandmot…