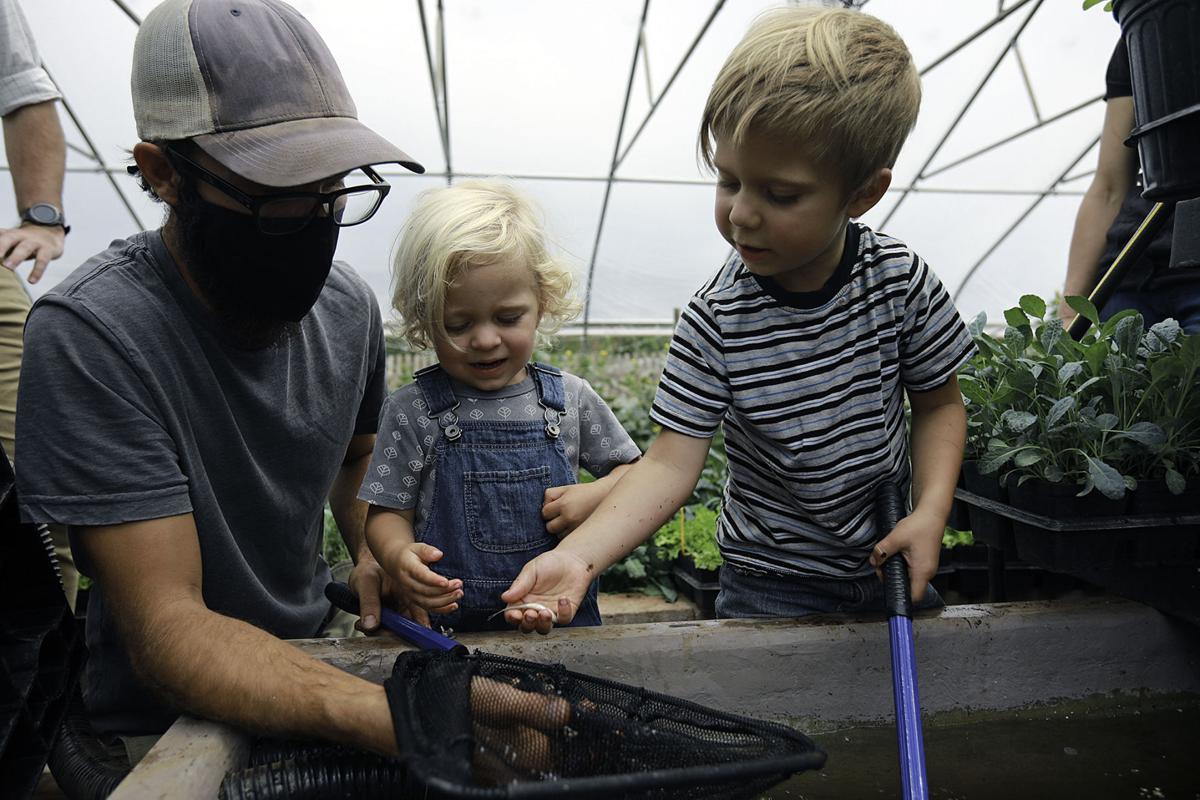 Arlo Fredricks shows a roundtail chub to younger brother Erez and father Rylan Morton-Starner in the hoop house at their family farm in Flagstaff Thursday afternoon. Forestdale Farms has partnered with the USGS this year to use threatened native fish species in water tanks to stimulate plant growth. 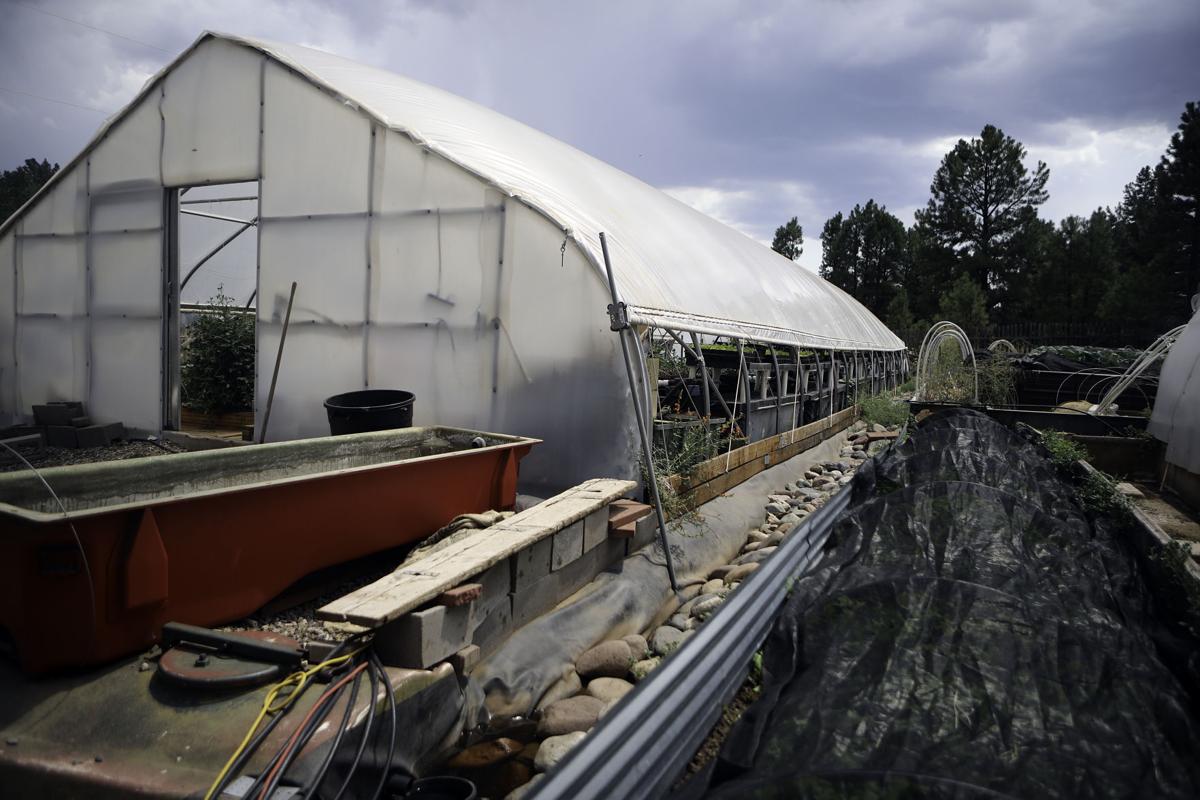 Forestdale Farms collects all of its water for growing via rain catchement systems. Here, the rain rolls off the roof of the hoop house and into a small channel that is stored in a small pond on site -- which is also home to a few fish.

While some master gardeners may know the benefits of watering your plants with water from a fish tank, a local farm is partnering with a federal agency to help them grow food and save struggling native fish at the same time.

The experiment was started by Rylan Morton-Starner, the owner of Flagstaff’s Forestdale Farm, who reached out to the U.S. Geological Survey for a rare public-private partnership. For their experiment, the farm is rearing struggling roundtail chub at their property and using the excess water from fish tanks to water their plants. Fish waste in the water causes the water to have high amounts of nitrogen that have led to stunning growth for the microfarm’s leafy greens, Morton-Starner said.

On the less than 2-acre farm south of Butler Avenue, a white hoop house covers the local farmer’s experiment with luscious leafy greens that are stacked on two-tier shelves in pots. Around the hoop house, Forestdale Farms has densely packed raised soil beds, a chicken coop and a pond to catch rainwater together to efficiently use every inch of space.

When asked about this experiment, and why using water from fish tanks works to grow plants so well, Morton-Starner compared using fish water for plants to the natural state of a stream or river.

“In a stream you have all the gravel that serves as your filter. Bacteria is colonizing and breaking down fish waste in that gravel,” Morton-Starner said. “Plants on the edge are using that excess water from the stream to grow. We’re basically taking that idea and making it into a production system.”

Morton-Starner said he knows many farms, like their own, in Flagstaff are smaller scale. His family microfarm normally grows an estimated 500 pounds of leafy greens per week at their peak growing season for various restaurants and multiple Community Supported Agriculture markets (CSA).

Owners of small farms know the lack of easily accessible water outside of cities, the clay or rocky soil for planting, and late frosts in May and June can make growing anything at all difficult. Any way for a farm to increase the quality of its crop yields safely can be a big benefit.

Morton-Starner first began considering aquaponics, the technique of using water from fish tanks for watering plants, as a way to innovate his growing operation.

After seeing a grant opportunity through the USDA’s Sustainable Agriculture Research and Education grant, Morton-Starner reached out to former colleague and friend David Ward, a USGS fish biologist. Ward has been researching why fish such as the roundtail chub have been struggling to survive in the wild, and he has been struggling himself to get enough specimen to conduct his research.

The two were able to turn the farmer’s small experiment into a larger production.

“By teaming up with a land owner that has space and resources, I can get specimen back from Rylan to get answers for important questions we’re looking at,” Ward said.

Together, the two devised a way to not only create a “closed loop” water system for the native fish and plants, but also how to measure the results.

“The benefit from the farming perspective to help small-scale farmers is they’re able to increase their crop yields by utilizing fish. We’re really trying to put a metric on that,” Morton-Starner said. We know having a fish in the system gets us twice, three times, four times the yield by the end of the season.”

On Thursday afternoon, Morton-Starner and his wife’s kids were running around the hoop house using nets to catch butterflies as hundreds of tiny roundtail chub swam and continued to grow in their tanks beneath two shelves of plants.

“It’s a relationship that works together: The fish benefit by the plants taking out their waste, and the plants benefit by getting those nutrients,” Morton-Starner said.

After Ward advised the farm on how to set up the tanks properly for rearing fish, hundreds were shipped in. The experiment has been working day and night since April. Multiple 100-gallon fish tanks sit on the ground at the edge of the hoop house, holding the roundtail chub.

As Morton-Starner feeds and cares for the fish, their waste will cause nitrogen to build up in the water that can be harmful in large quantities for any fish species.

To get rid of the nitrogen, the farmer uses a hose to spray the nitrogen-rich water from the fish tank to water his growing plants sitting on shelves above the tank.

And at the end of their first trial run, the farm could easily tell the difference. Morton-Starner said anyone could easily incorporate aquaponics into their garden at home and expect to see results. Ward said the fish doesn’t need to be a native species either.

“He could be using trout or sportfish. All he needs is something that’s producing waste to increase his crop yields,” Ward said. “The fact that he's using something that’s rare in Arizona, that we really need specimens for, and teaming up for conservation is a big help for us.”

By the end of their experiment, the farm plans to use fish tank water to grow arugula, lettuce and kale.

Roundtail chub are not federally listed species, but they are a native fish that is struggling on the landscape, Ward said.

Larger fish brought in from other parts of the country for anglers and water being increasingly used for agriculture and cities leaves less room in the state’s rivers and streams for lower value native fish, Ward said. His research is trying to find specific answers to what’s going on in the wild beneath the water’s surface.

“I’m trying to figure out at what size do native fish grow big enough where they're not going to be eaten by the rainbow trout or catfish that's being stocked,” Ward said. “That helps the management agencies know how much of a risk there is basically.”

The researcher has run into problems even getting fish to study, because a large portion of resources are devoted to these non-native, yet higher-valued, fish such as rainbow trout and channel catfish that are native to the eastern parts of the United States. Hatcheries are economically more inclined to spend more of their time on a fish that will return more profitable yields, Ward said.

Due to Arizona Game and Fish Department regulation on protected fish, he also can’t just go out and collect the fish from the wild. Spawning and rearing his own fish for research makes his studies take much longer.

“That's Rylan's angle,” Ward said. “He's figuring out how fish can help his operation, but at same time help us too.”

Ward said projects like these help people realize the threat real native fish, that have evolved to live here for millions of years, are facing.

A partnership like this could even go beyond rearing for laboratories, Ward hopes.

He said there might be a creative solution for farmers in conserving fish species in the future as many fish continue to be threatened. He’s hoping a good partnership could break down barriers between private landowners and government agencies to create the space for positive solutions in the future.

“The more people learn about the fish, the more interested they can be to conserve them so we don’t end up with a situation where all we have is rainbow trout and channel catfish,” Ward said. “Those are cool fish, but they have their place. I don’t want to see our native fish gone just so people have opportunities to go fishing.”

Arlo Fredricks shows a roundtail chub to younger brother Erez and father Rylan Morton-Starner in the hoop house at their family farm in Flagstaff Thursday afternoon. Forestdale Farms has partnered with the USGS this year to use threatened native fish species in water tanks to stimulate plant growth. 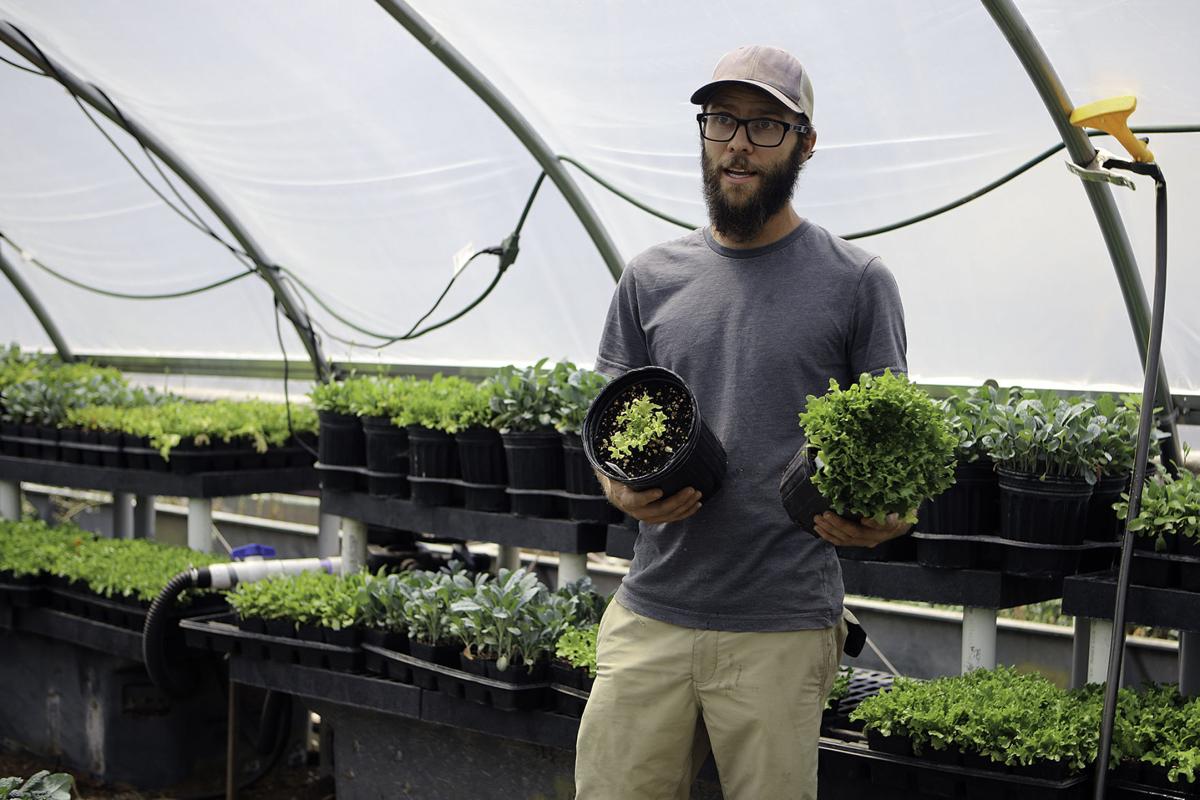 Rylan Morton-Starner of Forestdale Farms displays the difference between lettuce watered with fish water (right) and with plain rain water (left) Thursday afternoon, both of which were planted at the same time.

Forestdale Farms collects all of its water for growing via rain catchement systems. Here, the rain rolls off the roof of the hoop house and into a small channel that is stored in a small pond on site -- which is also home to a few fish.