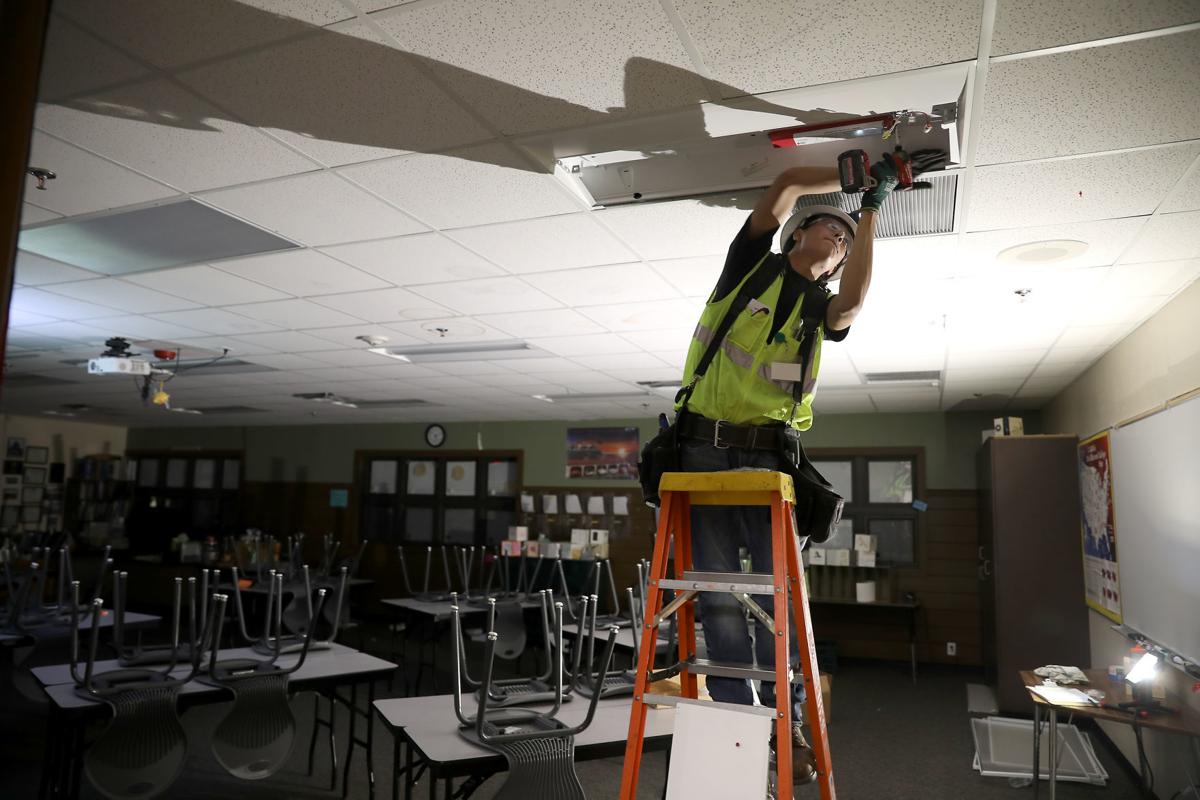 Greg Yazzie from Urban Energy Solutions installs a new light in a classroom at Flagstaff High School as part of a project to replace all of the lighting in all Flagstaff Unified School District buildings. 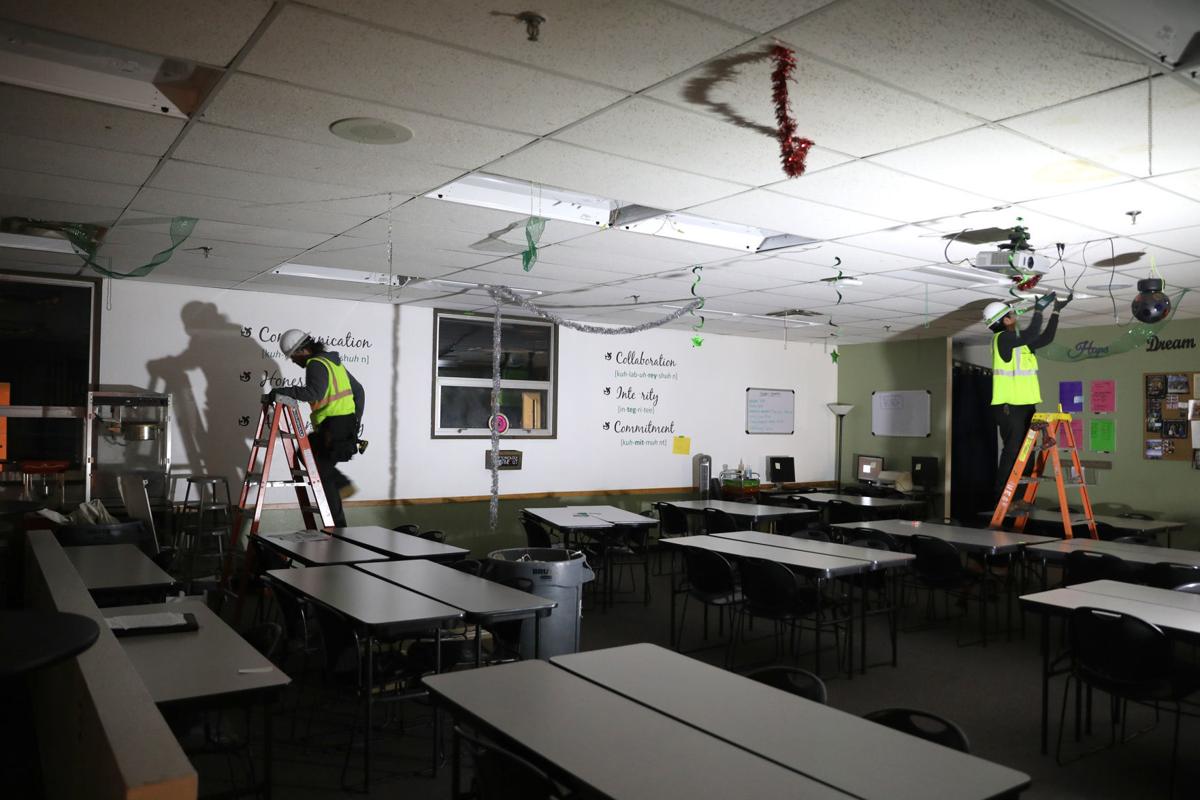 Electricians from Urban Energy Solutions install new lights in a classroom at Flagstaff High School as part of a project to replace all of the lighting in all Flagstaff Unified School District buildings.

Flagstaff Unified School District has entered into a $9.2 million energy contract to improve facilities and learning spaces by upgrading every single district light bulb, an effort that began this month.

The district has partnered with Midstate Energy, a Phoenix-based company that is currently working with more than 40 other school districts in Arizona, to replace its existing light fixtures with programmable LED light bulbs and produce savings Midstate officials have guaranteed will meet or exceed the cost of replacement at the end of the 15-year contract, which was approved by the FUSD governing board in October.

The contract calls for the replacement of 54,000 total indoor and outdoor lights at 17 district facilities, including the district office, warehouse and maintenance buildings, plus replacements of the boilers used to heat Flagstaff High School, Mount Elden Middle School and Sinagua Middle School.

Overnight lighting replacements began January 6 at Flagstaff High. Updates at all FUSD sites are scheduled for completion by December, with boiler work occurring during summer break. Killip Elementary, which will be replaced before 2023, will not receive lighting updates, but the next school scheduled for replacement — Kinsey Elementary — will.

The annual cost of the contract has been estimated at almost $579,000, with $635,000 in yearly savings. FUSD typically spends about $2.2 million on utilities each year. The light bulbs being installed are under warranty for nine years but have a projected lifespan of at least 20 years.

Such a guarantee is required by Title 15 of the Arizona Revised Statutes, which states a school district can enter a guaranteed energy cost savings contract if the project pays for itself. If the promised savings are not met, Midstate will reimburse the district the difference.

FUSD Assistant Superintendent of Operations Bob Kuhn said the goal is to reduce the district’s lighting costs by about 15 cents a square foot — to about $1.06. The LED light bulbs will cut existing wattage in half and the new boilers to be installed are designed to operate more efficiently at high elevations, he said.

Kuhn said Midstate will replace all but the fixtures where district’s electricians have already installed LEDs, like those in Flagstaff High’s auditorium. Crews will work for approximately 10 weeks at each of the high schools and middle schools before moving on to smaller sites like elementary schools, which are expected to take about 4 weeks to complete.

The project is funded by bond monies allocated for maintenance projects as well as additional financing that was secured in early December at an interest rate of about 2.5%, to allow the district to preserve bond funds for other facility improvements. During the governing board’s October 22 meeting, Jim Giel, the district’s attorney, said the amount borrowed would not exceed $7.8 million over the 15-year term.

A rebate from Arizona Public Service (APS) following installation is expected to supply the district with an additional $230,000 for the project, Madsen said.

Once the lights are installed in classrooms, the district can program them to a teacher’s specifications, such as dimmed lights near projections or extra illumination above science lab tables. In the nurse’s office at Flagstaff High, where lights have already been installed, those above the room’s beds can be illuminated or dimmed as needed.

The new lights will be controlled with a two-part kinetic switch, with one changing dimness and the other to rotate between two programmed scenes. Kinetic switches are powered by tapping the switch, the energy of which sends a radio signal to the lights, allowing the switches to be installed anywhere, regardless of electrical wiring. The different lighting settings can also be managed and reprogrammed with a teacher’s smartphone.

“Classrooms are getting reimagined and so our spaces have to adapt,” said Zach Fountain, FUSD Director for Communications and Public Relations.

Though Midstate will be making physical improvements to electricity-based systems, as part of the contract the company will also be monitoring FUSD’s electric, gas and water consumption using a software program that can alert district officials of an abnormality by phone or email. The district can also access the software anytime to track its energy savings.

This live monitoring, updated every 15 minutes using information from APS, will be available for the first three years of the contract, after which Midstate will move to an annual report.

“We really work the first two to three years to capture any energy problems, but we have found that savings don’t go away,” Madsen said.

At a rate of about 100 students an hour, iPads were dispersed throughout the Coconino High School student body this week, the first of the tab…

STEM Night 2020 in need of partners and sponsors

STEM City, a nonprofit that seeks to promote science, technology, engineering and math (STEM) to the Flagstaff community, is seeking partners …

Flagstaff Unified School District (FUSD) will be hosting kindergarten registration Wed., February 5 from 4:30 p.m. to 6:30 p.m. at all FUSD el…

Greg Yazzie from Urban Energy Solutions installs a new light in a classroom at Flagstaff High School as part of a project to replace all of the lighting in all Flagstaff Unified School District buildings.

Electricians from Urban Energy Solutions install new lights in a classroom at Flagstaff High School as part of a project to replace all of the lighting in all Flagstaff Unified School District buildings.