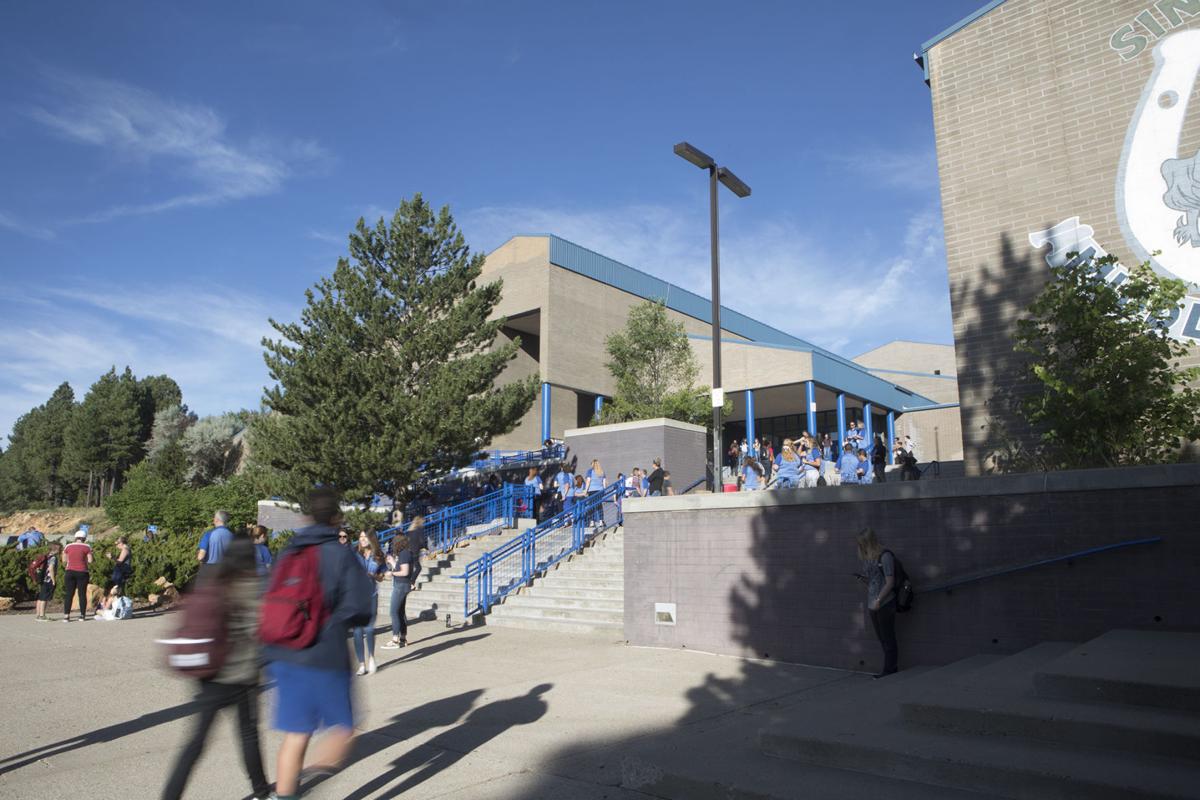 Students climb the stairs of Sinagua Middle School on the first day of the 2019-20 school year. 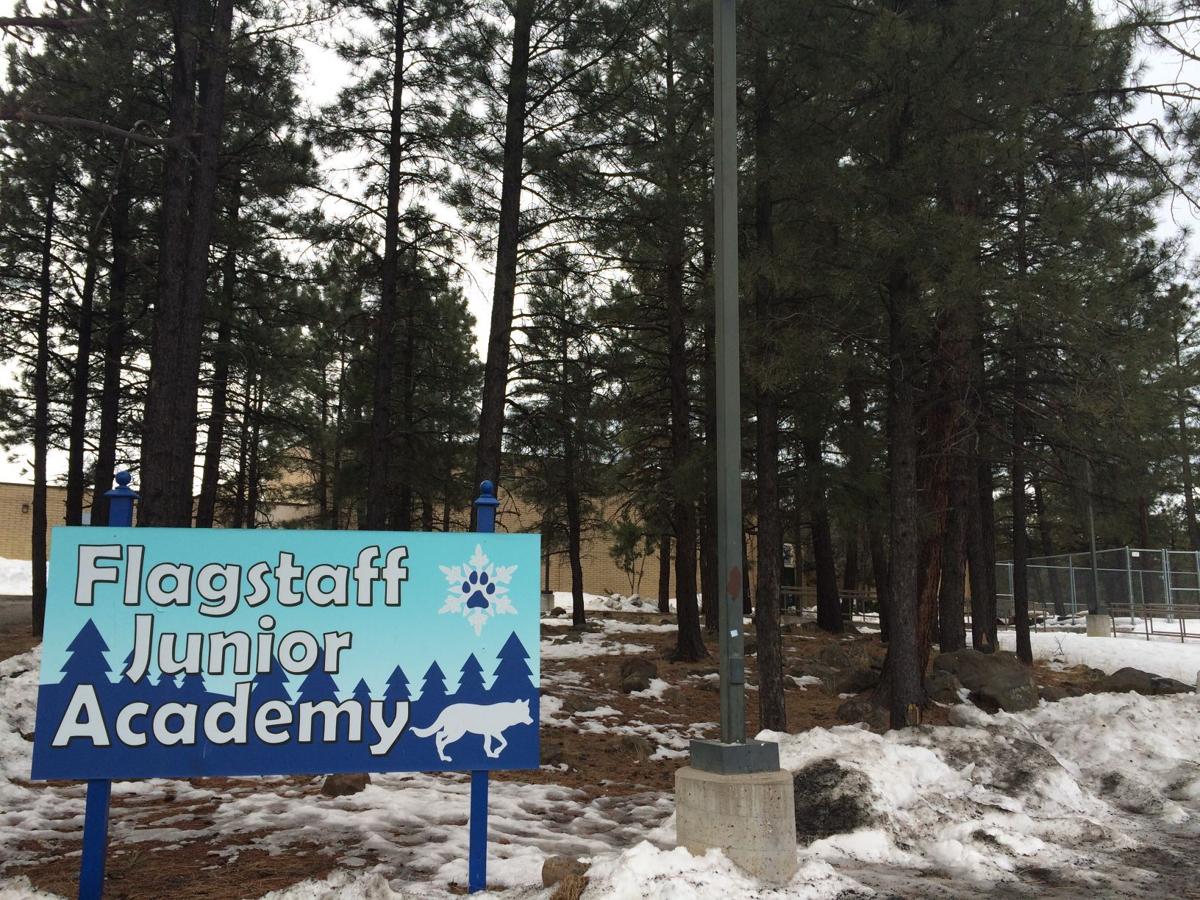 Flagstaff Junior Academy, a popular charter school in Flagstaff, occupies building rented from the Flagstaff Unified School District. FJA is one of five school campuses located within one square mile in downtown Flagstaff.

Schools in Flagstaff have not been exempt from the trend of TikTok vandalism that has become popular over the past few weeks. Flagstaff Unified School District (FUSD) and Flagstaff Junior Academy (FJA) sent reminders to their students last week not to participate in challenges popularized by the social media platform.

The main trend mentioned in connection to this vandalism is the devious licks TikTok challenge, which has affected schools across the country over the past few weeks. It encourages students to steal or vandalize items at their schools. In Flagstaff, the focus has been on hand sanitizer and soap in school restrooms.

In FUSD’s Sept. 28 board meeting, board member Carol Haden said the challenge had been mentioned by students in her recent visit to Flagstaff High School.

“We heard a lot of concerns about the restrooms," she said. "...There’s some sort of...TikTok challenge about destroying restrooms, soap dispensers and hand sanitizers, and apparently that’s been happening pretty regularly. The students were upset by that because they want to be able to wash their hands when they use the restroom and they can’t even do that.”

Sinagua Middle School (SMS) sent an email to its families in mid-September that students had been vandalizing the restrooms by stealing or damaging items as well as participating in another challenge that involved spraying Kool-Aid across the restrooms to mimic blood.

FJA’s weekly update for the week of Sept. 27 said that though they were “hopeful that FJA would be immune” from the challenge, the middle school boys’ bathroom had been “vandalized multiple times this past week.” They listed soap dispensers being torn from the walls and hand soap being poured down a drain as examples.

“We will not tolerate these actions and the complete disregard for our taxpayer’s hard-earned money to provide all students with a safe and clean learning environment,” SMS Principal Tari Popham wrote in the email. Discipline included “up to 5-10 days of out-of-school suspension and criminal charges,” and students and their guardians would be responsible for the financial impact of repairing the damage.

FUSD Superintendent Michael Penca said Wednesday that a group of district administrators is “meeting regularly” to work on the district’s response, especially communication efforts. He said a message had been sent to families of secondary students in the district last week.

“We’re going to really stay on top of it and continue to see how we need to communicate and provide resources to families so they’re aware of what may be going on, what questions they should be asking their child at home, monitoring social media use and things,” Penca said.

He said the district was also focusing on making students aware of consequences for such actions.

"We have local district policies and some of these -- vandalism, theft, threats -- that cause disruption...and could have legal consequence for students, so we want them to understand and be informed that just because someone’s encouraging it on social media doesn’t mean it's a good idea and it could have consequences for you as an individual," he said.

FJA administration spoke to all middle school classrooms about the behavior, according to the update, and asked families to reinforce the message at home.

“For now,” the update concluded, “we’ll have our middle school boys take soap from the classroom with them when they go to the bathroom (rather than leaving the soap in the bathroom to be vandalized).”

Penca thought that part of the challenge's popularity was due to a need for readjustment after a year of remote learning.

Popham and Haden both mentioned that these acts also had an impact on schools’ COVID mitigation measures.

“Due to the vandalism, we currently are unable to sustain our COVID-19 mitigation plan by providing sanitizing stations and soap stations in our hallways and restrooms. This leaves SMS students in great risk of increased exposures and potential shutdown with the return to online learning. It is important to remember that all technology and social media should be used cautiously,” Popham said.

“Maybe this too shall pass,” Haden said, “but in the meantime it’s kind of disturbing, especially when we’re trying to encourage hand-washing and sanitization.”

The vandalism “has settled down in the last couple weeks,” Penca said Wednesday morning, though “...they seem to have new challenges, so it’s something we want to continue to communicate with our families and students throughout the year. While it feels like things have improved, we intend to stay on top of it all year long.”

Students climb the stairs of Sinagua Middle School on the first day of the 2019-20 school year.

Flagstaff Junior Academy, a popular charter school in Flagstaff, occupies building rented from the Flagstaff Unified School District. FJA is one of five school campuses located within one square mile in downtown Flagstaff.