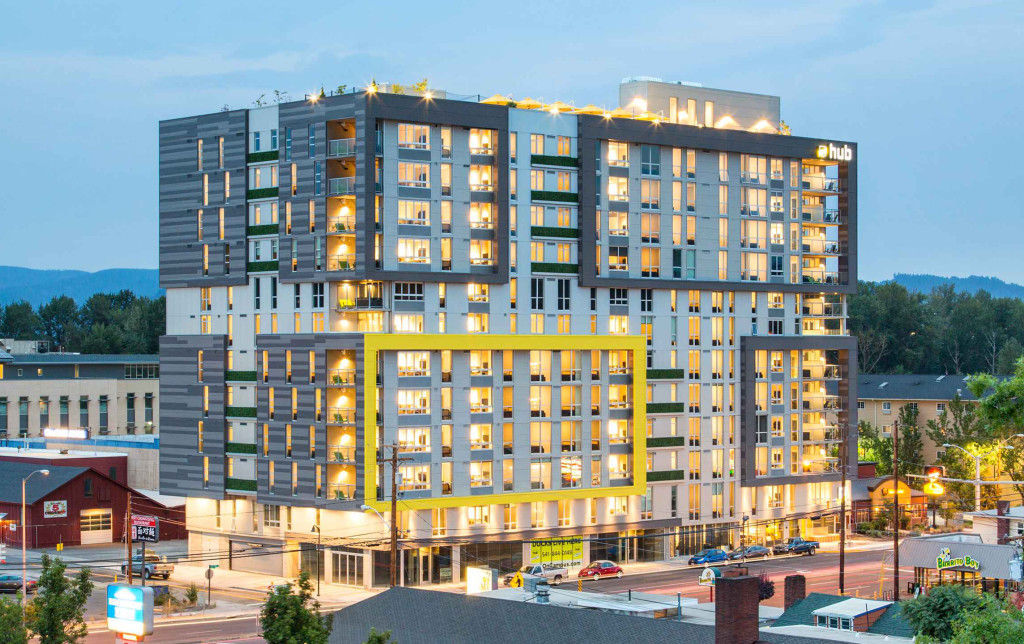 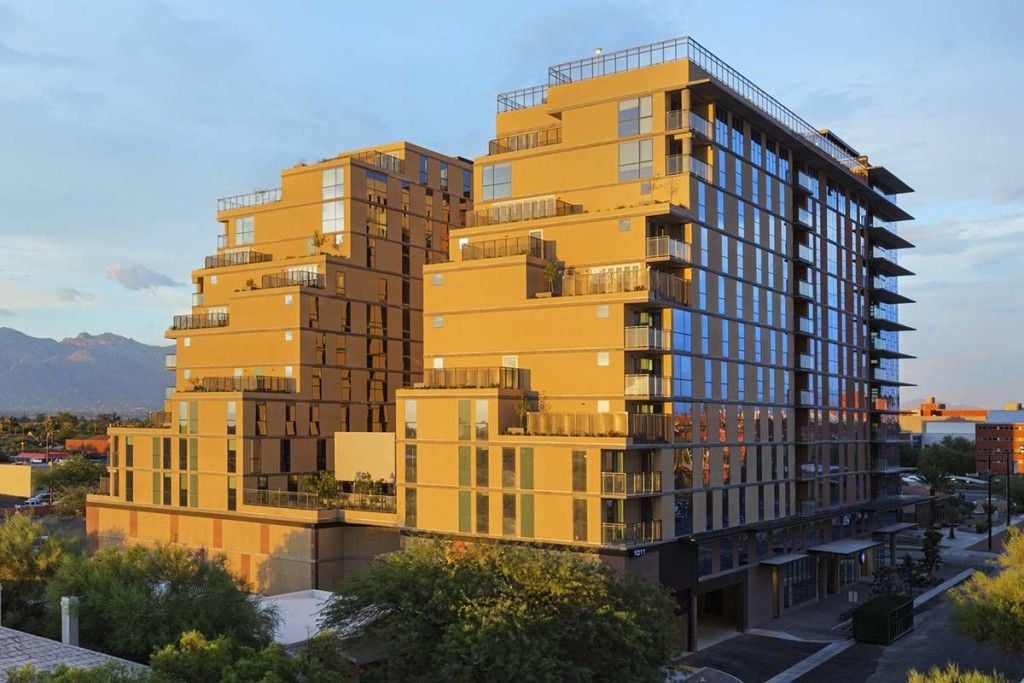 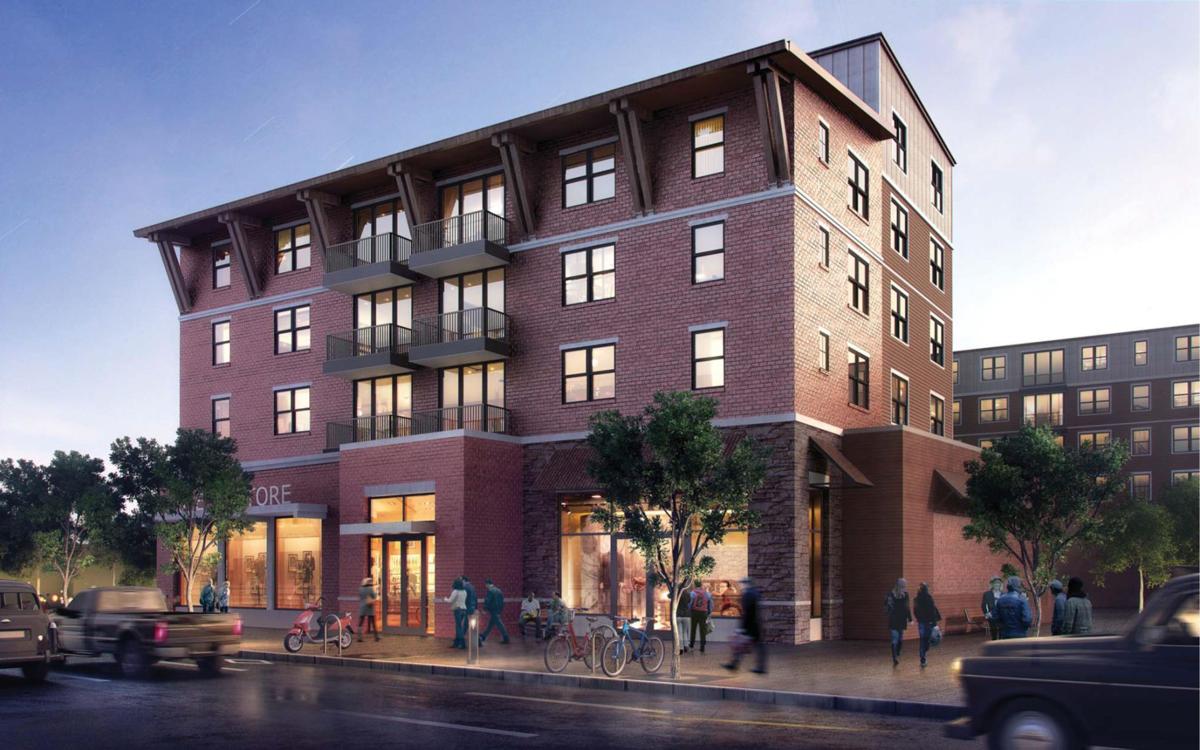 One rendering of The Hub from  Milton Road. 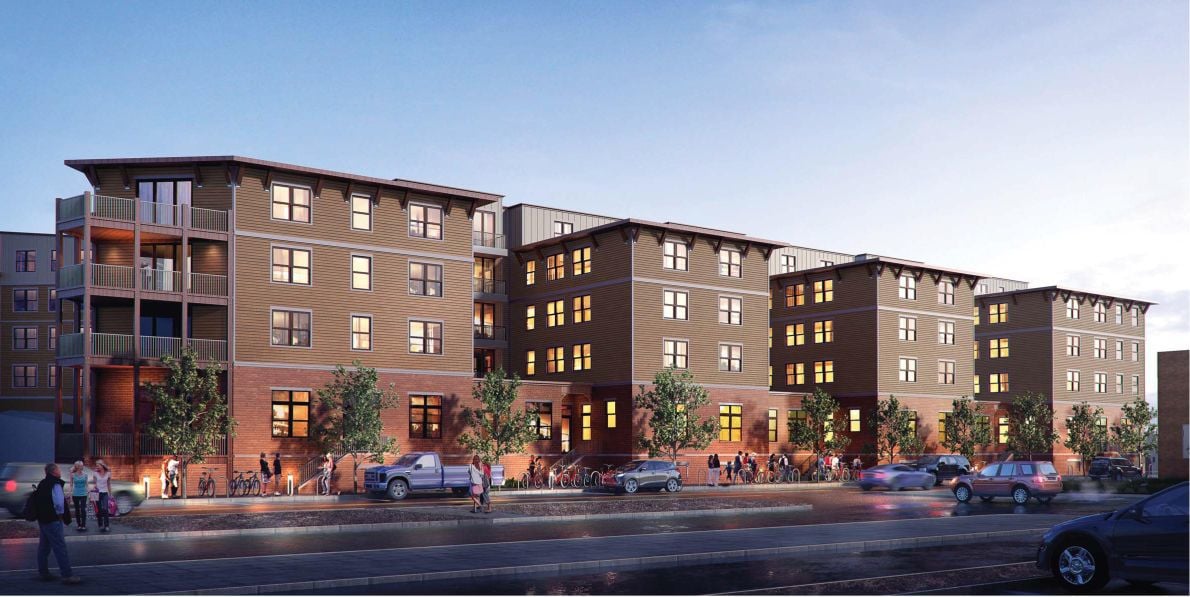 This rendering of The Hub on Phoenix Avenue was among the first to come before the city. 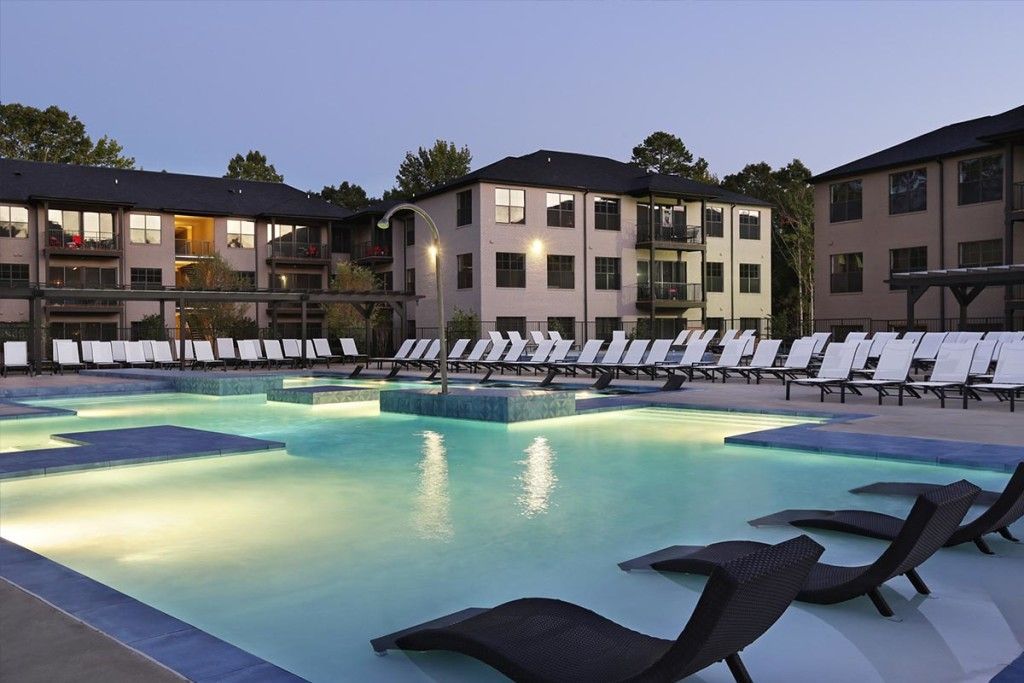 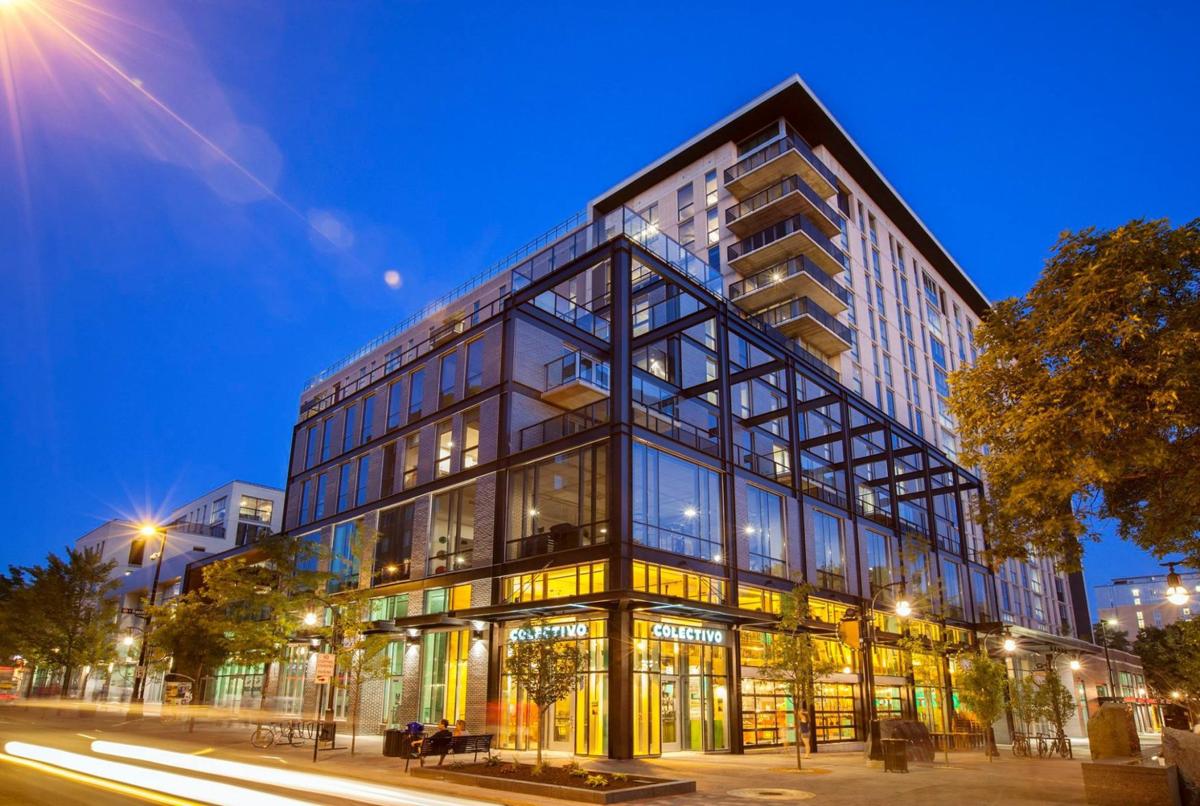 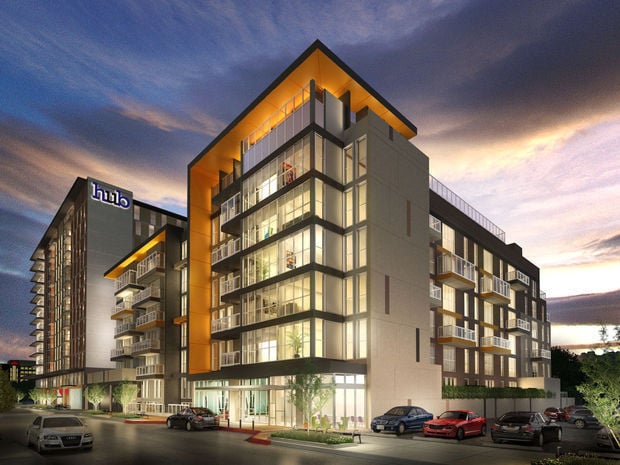 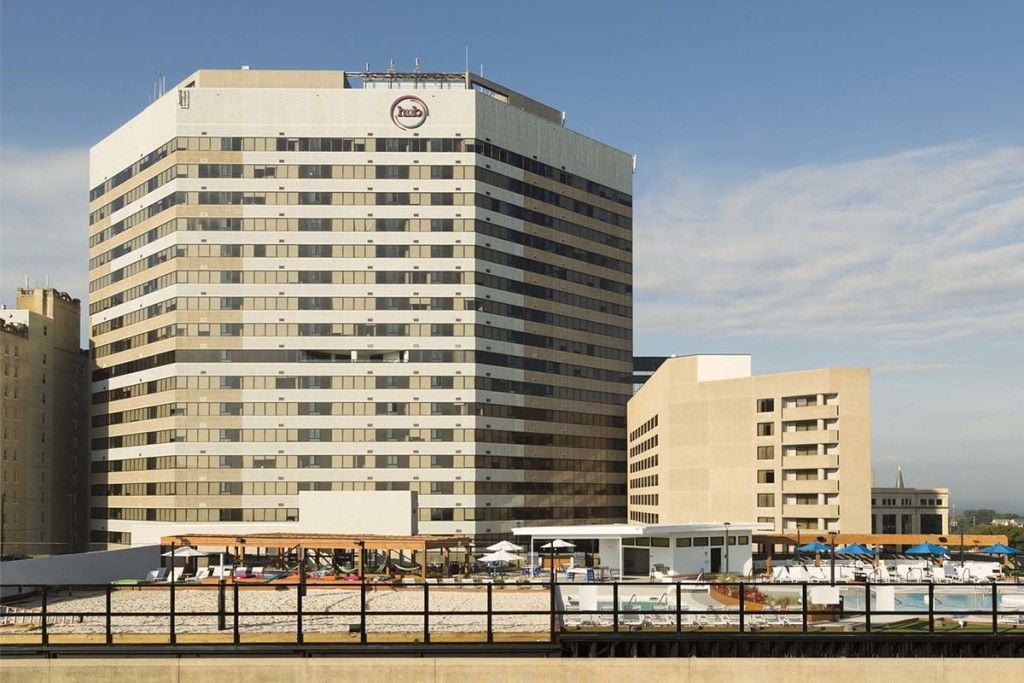 The student housing complexes built by Core Campus, all known as The Hub, are getting mixed reviews across the nation.

Core has Hub complexes in Eugene, Ore., Oxford, Miss., Columbia, S.C., Tucson and Madison, Wisc. It sold its first Arizona apartment high-rise in Tempe in 2013 for $103 million to Inland American Communities Group. It is currently working on new complexes in Flagstaff and Corvallis, Ore.

In Flagstaff, the company is proposing a 664-bed apartment complex geared toward students on Mike’s Pike. The company is asking the city to flip/flop the zoning on the site to allow it to build retail shops on Mike’s Pike instead of Phoenix Avenue. It filed an additional site plan with the city on Monday that would allow the company to build using the existing zoning on the site. The Arizona Daily Sun has not seen the details of the alternative plan.

The company typically builds multi-story apartment buildings made of concrete, glass and steel geared toward college students. However, in a number of cities, such as Flagstaff, it has modified its typical building exterior to blend with local materials and colors. In Oxford, it built a campus of one- and two-story buildings. The Hub buildings typically hold 300 to 800 students depending on the location and are usually located in more urban areas.

Core’s other new project for Corvallis is currently in limbo. According to the Corvallis Gazette-Times, Core Campus withdrew its application to build a Hub there in April 2015, after Corvallis city staff and the city’s planning commission recommended denial of the project.

Corvallis is similar in size to Flagstaff with about 55,000 residents and about 25,000 college students from Oregon State University.

The topic was supposed to go before the Corvallis City Council at the end of March 2015 when the developers withdrew their request. Core and the land owner, GPA1, may bring their request back to the city of Corvallis sometime this year.

The area is zoned for multi-family residential projects, he said. But, like Flagstaff residents who agreed to the special transect zoning overlay for Mike’s Pike and Phoenix Avenue, Corvallis residents were not expecting such a large and dense project to be built there.

The reason that Corvallis city staff recommended denial of the project was because of a development overlay district on the property, Wright said. The overlay detailed a number of restrictions to protect natural features and animal habitat in the area. The particular 30 acres that The Hub Corvallis is planned for also has a lot of wetlands, which would also require Core and GPA1 to get permits from the Army Corps of Engineers and the state of Oregon to disturb during construction.

Wright and Corvallis Gazette-Times reporter Jim Day said if the project were to come back, it would have to be substantially different in order for it get approval from the city.

In Columbia, S.C., the city is dealing with a tight downtown parking situation similar to Flagstaff caused by the rapid growth of its downtown area. According to the Columbia, S.C., newspaper, The State, local businesses are saying that parking has become worse since The Hub has moved in.

However, the Columbia Regional Business Report reported in June 2015 that while parking remains a concern, business owners are liking their new, younger neighbors. The paper reports that the students have brought in more business for existing shops and are attracting new shops to the area.

Core typically provides less than one parking spot per bed for each of its complexes. It also usually charges its residents a fee for a parking spot. Fees range from $45 per month in Eugene to $85 per month in Columbia.

In Tucson, Core had a different problem: students throwing things from balconies.

Core opened its first Hub in Tucson in 2014, according to the Arizona Daily Star. A second Tuscon Hub is slated to be built next door.

According to the Daily Star, in March 2015, the city had problems with college students in multiple high-rise apartments, including The Hub, throwing beer bottles and other items from the balconies of their apartments at a nearby mosque. Students were also caught yelling at people attending the nearby mosque or just walking by the buildings. All three complexes, including The Hub, installed cameras to monitor balconies and the Hub fines students caught throwing things $1,000.

Core also built a Hub in Tempe, which it sold shortly after the building was finished in 2013, according to the Phoenix Business Journal. According to AZCentral.com, that building, now known as University House, also had a history of students throwing items from its balconies.

The tossing of items from balconies on student high-rise complexes in the Tempe area got so bad that the fire department at one point refused to respond to the high-rises without a police escort. The company that owns University House has closed the balconies and restricted window access at the high-rise.

College students living in the various Hubs around the country also have mixed reviews of the apartment complexes. A search of Google or Yelp reviews for any one of the projects will show numerous comments in favor of the high-rises.

Core’s apartments, while pricey, do have their perks. Many of its developments have rooftop pools and hot tubs, tanning salons, study areas, conference rooms and private gyms. Their apartments typically come fully furnished, including big, flat-screen TVs, washers and dryers, walk-in closets and showers, private balconies, stone countertops, some include private saunas and hot tubs. Each Hub is different and offers different perks.

Rents run from $610 per month to more than $1,600 per month, depending on the location of the building, size, number of bedrooms and luxury package included with the apartment.

Yelp and Google also list numerous complaints about the various Hubs, including lack of heat in some apartments in Madison, slow Internet, unfinished apartments, students being overcharged for repairs to apartments after they leave, loud neighbors, thin walls, cheap furniture and unresponsive staff.

Appeal of staff approval of Hub rejected by city as untimely

The city of Flagstaff has rejected an appeal of staff’s approval of The Hub’s site plan.

According to city records, attorney Bill Ring filed the appeal on behalf of 120 Cottage Place, LLC. City Comprehensive Planning and Code Administrator Roger Eastman denied the appeal because it was not filed within 10 calendar days of staff’s decision to accept The Hub’s site plan. Staff approved the site plan on December 11. Ring sent his notice of appeal on March 14.

According to a city press release, the denial of the appeal will not prevent Flagstaff City Council from making a decision Tuesday night on The Hub’s request for a zoning change.

In a meeting earlier this week, FUSD approved a proposal for an update to HVAC systems in four district schools. This is funded as part of the…

Act One Arizona, an arts in education nonprofit, is launching a virtual reality field trip program in order to bring the arts to students in m…

Killip Elementary students had another start to their school year Tuesday as they began class in the former Flagstaff Middle School building.

Sinagua Middle School to finish the week with remote learning

Sinagua Middle School will move to remote learning for the rest of the week due to an outbreak of COVID-19, with plans to return to in-person …

Flagstaff Unified School District has had an eventful start to the school year, with COVID-19 and flooding in the city causing plans to change…

After extensive damage caused by flooding earlier this month, Killip Elementary School will finish out the year in the former Flagstaff Middle…

The City of Flagstaff has declared this week Camp Colton Week, in honor of the camp’s 50th anniversary. From square dancing to Boomball to tri…

One rendering of The Hub from  Milton Road.

This rendering of The Hub on Phoenix Avenue was among the first to come before the city.