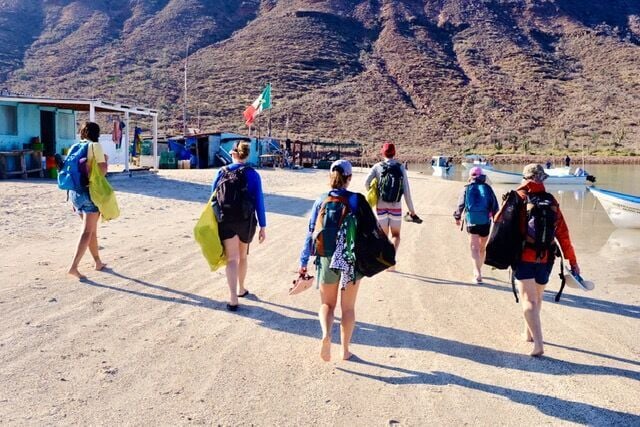 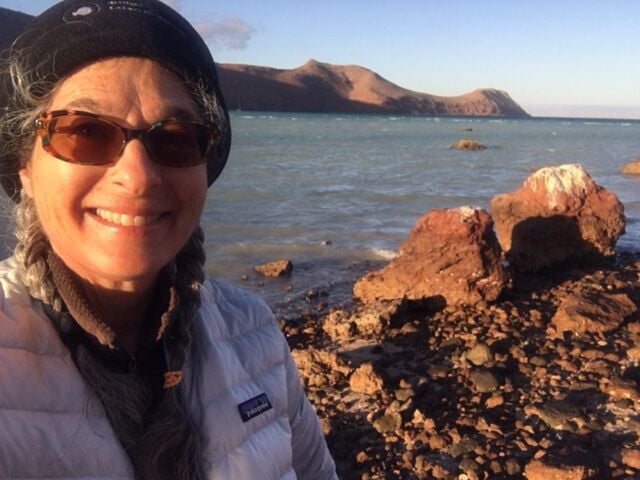 Susan Brown, a seventh-grade science teacher at Northland Preparatory Academy, poses for a photo. Brown was part of an ecology fellowship program through Ecology Project International in early April. 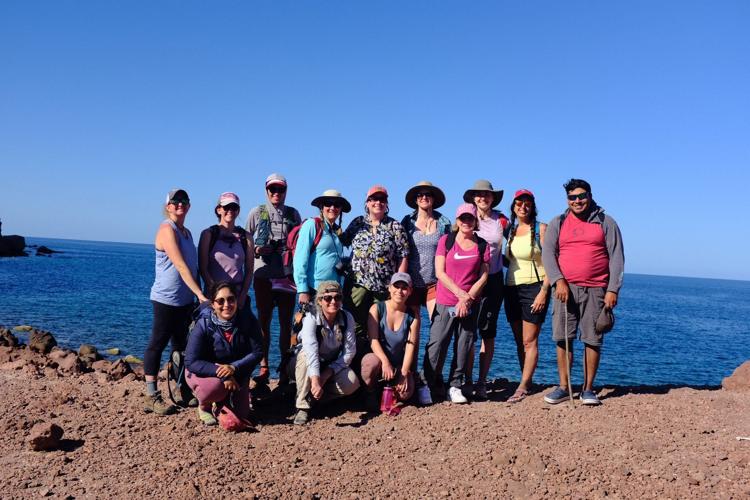 The group of teachers pose for a photo while participating in the EPI fellowship on Espiritu Santo Island in early April. 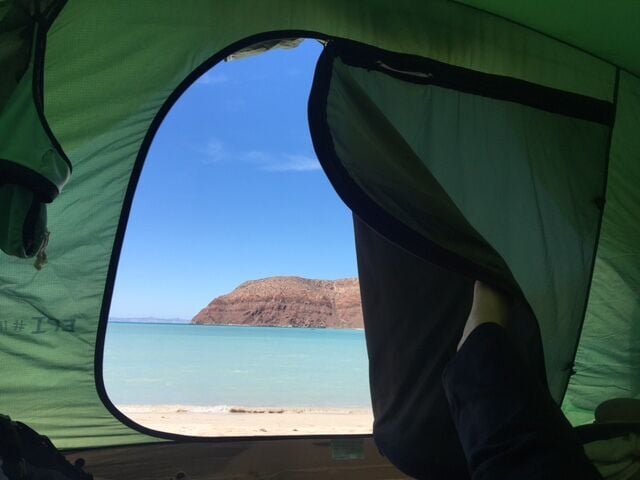 The view from Susan Brown's tent during her fellowship. A group of science teachers spent four days camping on Espiritu Santo Island as part of the Ecology Project International program.

Northland Preparatory Academy science teacher Susan Brown was one of nine teachers selected by the Ecology Project International to travel to Baja, Mexico, for an eight-day teacher fellowship that took place April 2-9.

She’s been back to work this week, sharing what she learned with her students.

The fellowship was looking at the ecological diversity of Espiritu Santo Island, a UNESCO site Brown described as “the mini Galapagos of Mexico.” A press release on the fellowship notes that the island is home to 39% of marine mammal species in the world.

“I think the kids were kind of shocked when I showed them some pictures,” she said of her tent.

Despite braving one windy night, Brown said it was “really great.”

The group was served fish freshly caught from the ocean and at one point saw bioluminescence in the water at night.

While the group was there, the teachers participated in citizen science projects and learned about various education methods and ways they could be applied to the classroom.

Part of their work was helping a local researcher do a population count of crown of thorns starfish in the reefs. Overpopulation of these starfish has damaged the Great Barrier Reef in Australia, and a project done by this researcher from 2017 to 2019 found similar damage, Brown said.

The fellowship teachers joined his citizen science project designed to manage the problem, surveying the starfish population on different coasts.

Crown of thorns starfish are native to these area, Brown said, and will be found in a balanced ecosystem.

The problem is overpopulation.

“When the ecosystem gets unhealthy, you can have an outbreak for a variety of reasons,” she said. “...When the waters get warmer from agriculture, when you get phosphates in the water, it provides a lot of food for the babies and they grow. There’s not the predators there for the starfish, which is a certain snail [Giant Triton].”

Other citizen science projects they were involved in included data collection for the Reef Environmental Education Fund and whale shark identification for Sharkbook. Each whale shark has a different pattern so that they can be assigned a number in the database.

According to a press release, EPI “is a field science and conservation organization that partners scientists with local and international students and educators in ecology hot spots.”

The Baja fellowship is EPI’s 10th annual, designed to immerse teachers in the area’s ecology, with underwater data collection and lessons on incorporating field studies into teaching.

Brown had traveled with EPI previously, taking a four-day workshop in Baja a few months before the pandemic. The opportunity to spend more time there and [dig deeper] into the area’s biodiversity excited her, she said.

“The EPI runs trips to talk about conservation: how do we conserve? Let’s learn about our environment,” Brown said. “...They always try to bring some par of it in, whether it’s talking about microplastics or what we can do to cut down on it, or do a beach cleanup. They also like to pull in authentic science…let’s go ahead and make observations and collect data and be part of what’s going on out there.”

She said she often tries to incorporate citizen science projects into her classroom as a way to involve her students in science and show it can have a purpose.

“I always try to bring in a couple citizen science projects a year, because I feel authentic science and having students know that what they’re doing is valued, that I’m not just doing an exercise to do an exercise in science class," she said. "This data is actually being used and it's going towards a bigger understanding.”

Brown said her biggest takeaway from the trip was the opportunity to connect with other educators from across the country. They were all science teachers, from kindergarten to college.

“The collaboration is the best because we’re getting some of the top educators in the nation to get together and share ideas and work together,” she said.

Brown has been incorporating the trip into her science classes. Before she left, Brown had her students research the crown of thorns starfish. When she returned, she gave a presentation on her trip and added some hands-on exercises.

“We’ve talked about food webs and what makes a healthy food web. So when I came back, I showed them pictures,” she said.

She then asked questions such as: “…Which one looks healthy? What are the differences between them?...and we talked about what we weren’t seeing.”

She also used the lesson to talk about climate change and microplastics, and what they could do in response as well as how species adapt to survive. Baja’s environment is “desert-y,” Brown said, so she was able to make comparisons to what some of her students had observed in more southern parts of Arizona.

Being put back into a student mindset was a “great reminder,” Brown said.

When they first got to the island, the fellowship teachers were tasked with identifying the fish they saw using a set of reference books. After they had identified a few species and begun to learn more about them, the task was much easier.

“When you went out there [at first], you tried to make observations, but it wasn’t very specific,” she said of the experience. “...They put us back into the position of being a student -- which was really great because it refreshes like, ‘This is how a student feels when they don’t know anything or how to make careful observations.'”

Brown added: “It was really refreshing to get that reminder and come back and be like, 'I know why you guys are struggling, I totally get it. Let’s slow down today.'"

More about EPI can be found at ecologyproject.org.

A new Arizona Board of Regents grant will allow researchers to study ways to mitigate the increased risk of cancer and cardiovascular disease that comes with being a firefighter.

Arizona teachers received total of a million dollars in grants as part of the Wishes for Teachers program, and three teachers in Flagstaff wil…

Northern Arizona University (NAU) signed partnership agreements with two Panamanian universities Tuesday to advance its work in "industries that are increasingly critical to a global society.”

At last week’s ABOR meeting, Northern Arizona University gave an update on how it is using its NEI funds as well as an overview of its plans f…

Susan Brown, a seventh-grade science teacher at Northland Preparatory Academy, poses for a photo. Brown was part of an ecology fellowship program through Ecology Project International in early April.

The group of teachers pose for a photo while participating in the EPI fellowship on Espiritu Santo Island in early April.

The view from Susan Brown's tent during her fellowship. A group of science teachers spent four days camping on Espiritu Santo Island as part of the Ecology Project International program.