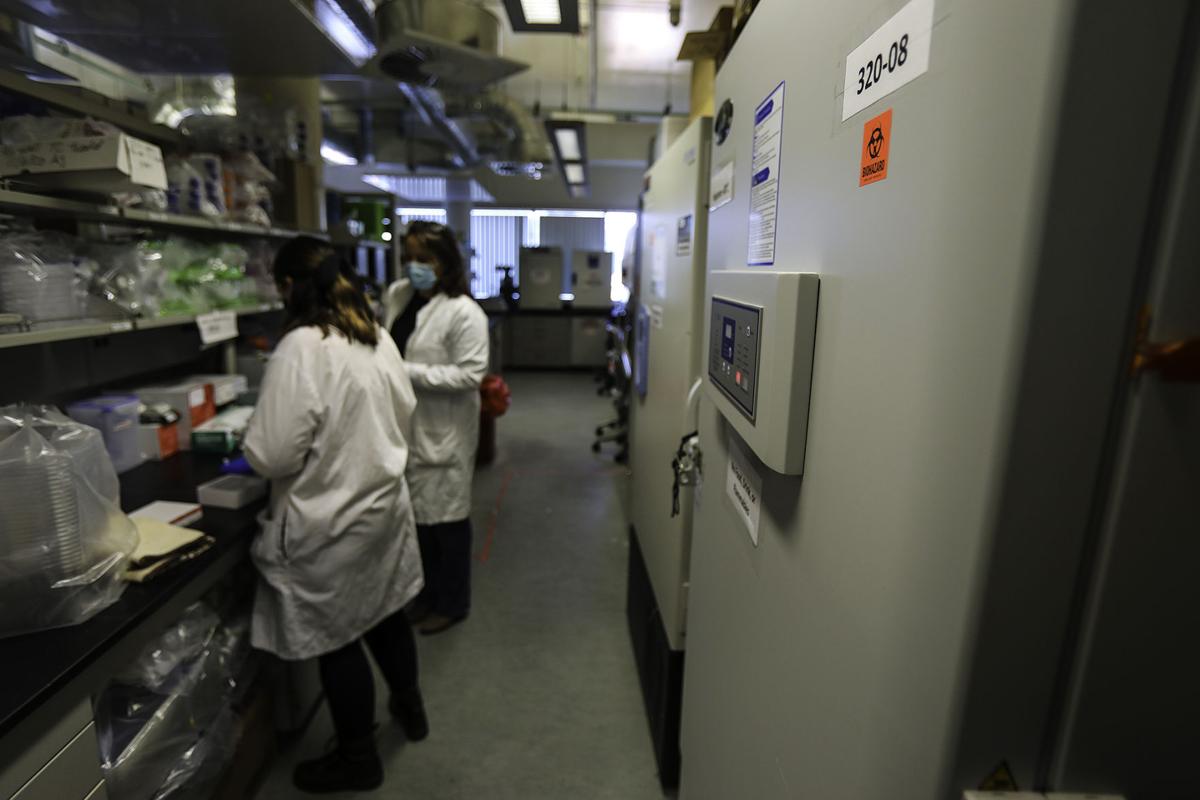 Daryn Erickson and Crystal Hepp pick out a few mosquitos for testing last week at the lab inside Northern Arizona University's SICCS building. 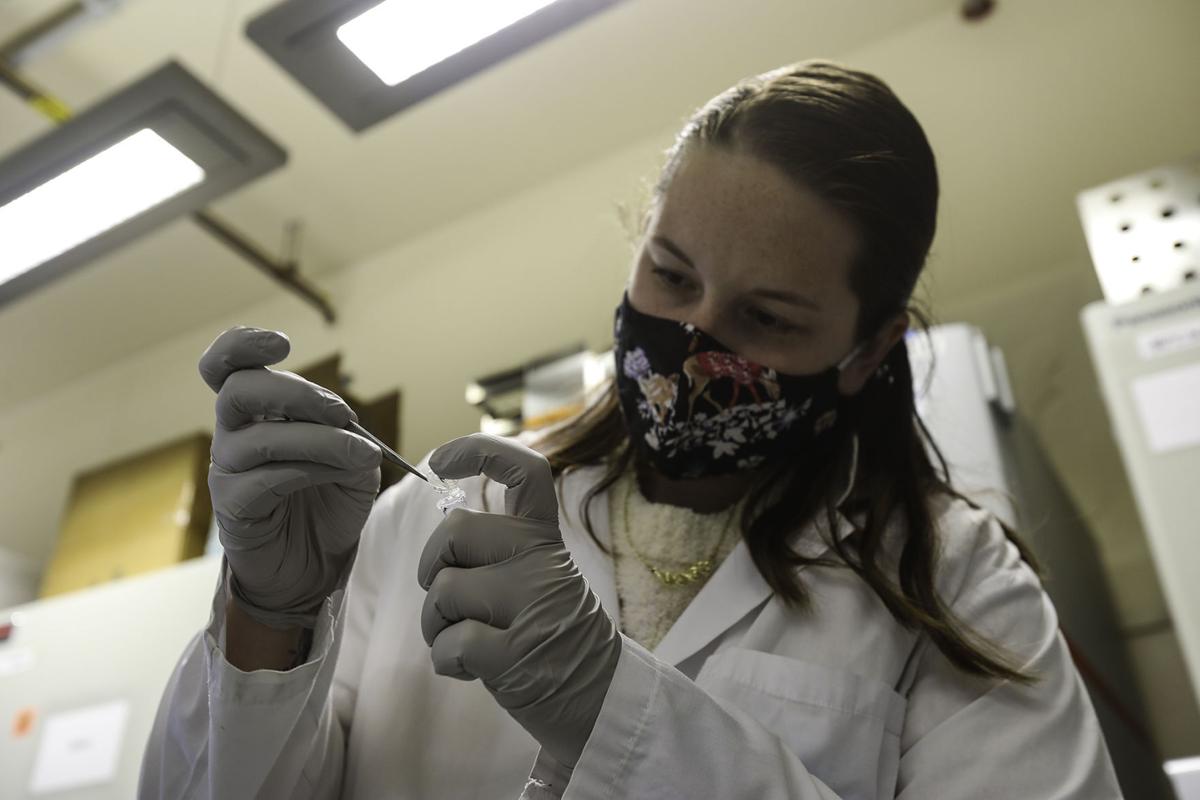 Daryn Erickson, graduate student at Northern Arizona University, pulls a mosquito from its tube inside the lab in the SICCS building Wednesday, Jan. 5. Erickson is helping with a study gauging the risk of pandemic outbreaks in Maricopa County related to diseases commonly carried by mosquitos. 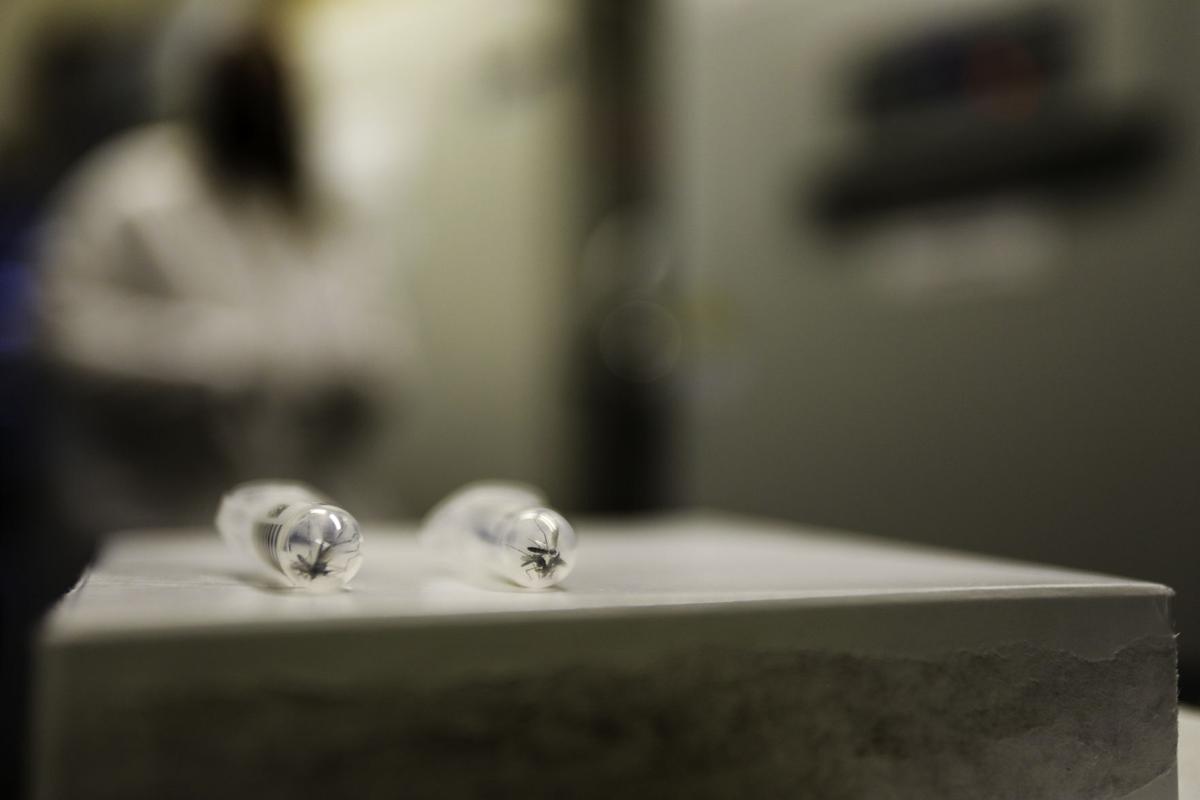 Jason Ladner and Crystal Hepp are leading projects that use mosquitos, bats and genomic sequencing to learn more about animal-transmitted diseases.

Scialog, a combination of science and dialogue, is intended to “support research by stimulating intensive interdisciplinary conversation,” according to a press release from NAU. Each topic is covered over the course of three years, with projects receiving yearlong grants at $50,000 for each participant. The NAU researchers are part of the Mitigating Zoonotic Threats cohort, which is in its first year.

Ladner, a biological sciences department assistant professor, has received Scialog grants for two projects this year,  with both involving the PepSeq platform he has been working to develop at the university.

The PepSeq platform analyzes blood samples for a number of antigens in a process known as highly multiplex serology. Essentially, it shows an organism’s history of virus exposure.

“It’s really important to understand the animal virome -- what are all the viruses that are currently circulating in the animal population -- because those are the ones that are most likely or have the potential to spill over into humans in the future. But it's also a super huge challenge, because the diversity of viruses affecting animals across the globe is gigantic and most of it is still uncharacterized,” he said.

Ladner’s first project will use the platform to get a better sense of which viruses can be found in animals. They will be doing so through xenosurveillance, testing samples retrieved from arthropods (mosquitos, in this case) rather than directly from the animal species. Genomes inside a blood sample can be used to determine which species it is from.

The project will take place in three stages, beginning by comparing samples of blood taken from lab-raised mosquitos to the blood they were fed. The next step is to take blood samples from animals in captivity, comparing them to mosquitos captured nearby. The last stage will involve a more general study of samples taken from wild-trapped mosquitos. The partner teams for this project are in Kansas and Iowa, so mosquitos for this stage will be from around the country.

The goal is to understand “not just which viruses are there but to better understand what are the host species that these viruses are infecting and and what is their relative abundance in those hosts?” Ladner said.

The rarity of infection in a host species in combination with how closely or often the species comes into contact with humans can give a better sense of how likely a given virus is to spill over into the human population.

The second project Ladner is involved in will use the same process to study viruses infecting new-world bats.

New-world bats (those found in North and South America) have been studied less than those in other parts of the world. The project chose to focus on bats because they have been associated with a variety of diseases transmitted to humans -- some of which are especially severe.

“Mammals are our most closely related relatives," Ladner said, "so there is a higher probability that a virus that can affect another mammal species will be able to infect humans as well. Bats are actually the second-most specious group of mammals, the first being rodents. So there’s actually a lot of diversity in bats, so you would expect also to have a large diversity in viruses.”

Ladner said both projects hoped to provide insight on critical topics, including for preventing future pandemics.

“It’s really critical to understand the diversity of viruses that are affecting other animals,” he said. “...We need complementary approaches in order to really comprehensively understand the viral diversity that’s out there.”

Associate professor of the school of informatics, computing and cyber systems, Hepp is the other researcher leading a Scialog project at NAU this year. Her project also uses xenosurveillance to better understand the risk of virus importation in Maricopa County.

“What we’re trying to do is develop a distribution of risk,” Hepp said. “...When we have this kind of situation where we see that flaviviruses or alphaviruses are really peaking in other parts of the country, then this understanding…can also guide vector control and public health agencies on locations where mitigation activities should be targeted.”

It ties in with her other work at NAU that includes public health efforts in Maricopa County. Hepp has previously worked with culex mosquitoes, which are known to transmit diseases such as the West Nile virus and Saint Louis Encephalitis (SLE).

The year 2021 actually had one of the biggest outbreaks of West Nile in Arizona, she said. Hepp’s Scialog project focuses on another mosquito species, aedes aegypti, which can transmit dengue, yellow fever and zika, among other viruses, though though there haven’t been any Arizona cases that they know of.

There are several reasons they’re using Maricopa County for the study: its extensive mosquito surveillance network (over 800 carbon dioxide traps, according to Hepp), the number of migratory species and the prevalence of aedes aegypti in the region.

“Arizona is just a really good place to be conducting this first study,” she said, “and Maricopa County with their excellent surveillance systems provides a really attractive test site. ...We know that there’s a thriving population of aedes aegypti there, so given the proximity to locations where we know diseases like zika and dengue have been, given the birds, given the bats, it just makes a really good test site.”

Mosquitos from Maricopa County will be shipped to the lab at NAU and tested to see which viruses they may be carrying and which animals they have bitten.

Daryn Erickson, a student at NAU, is responsible for much of the project’s lab work. She started working with Hepp as an undergraduate and decided to stay for her PhD program, incorporating mosquito research into her dissertation.

She described the process of extracting samples and conducting blood meal analysis for the study, looking at specific “genes of interest.”

They’ve already identified one insect-specific flavivirus present in Maricopa County’s aedes aegypti population. While it can’t infect humans, it has the potential to competitively inhibit other flaviviruses that might. The prevalence of West Nile virus in the late 1990s likely inhibited the spread of SLE in the United States, Hepp said as an example.

The project’s two partner groups, led by Silvie Huijben at Arizona State University and Kezia Manlove at Utah State University, will be doing other kinds of analysis on this data, developing geographic risk models and studying insecticide resistance. These, alongside the results of NAU's research, will be added into the larger risk model the three are planning to create within the year of funding.

Hepp said she and Huijben, especially, had been looking for a chance to collaborate.

“The more we talked during the Scialog meeting, the more we found that…this is what we think would be important to Arizona. We’re in the middle of a pandemic right now, how can we better gauge risk for another?” Hepp said.

After last week’s return from winter break, Flagstaff Arts and Leadership Academy (FALA) has decided to use its two remaining snowdays as comm…

In preparation for its spring semester, which starts Monday, Northern Arizona University hosted a virtual town hall to discuss how omicron wou…

Flagstaff high school students will have the chance to apply for a new music scholarship this month. Started by Bob and Pina Miller in memory …

Despite increasing concerns about the omicron variant, higher education institutions will keep their plans for the spring semester.

This year marked a few milestones for higher education in Coconino County, with Northern Arizona University (NAU) welcoming a new president an…

Chess has returned to Northland Preparatory Academy, with a full team competing at two statewide tournaments near the end of 2021.

Sleds and snowmen take over much of the East Coast

Sleds and snowmen take over much of the East Coast

Large waves cause flooding in Massachusetts

Large waves cause flooding in Massachusetts

Daryn Erickson and Crystal Hepp pick out a few mosquitos for testing last week at the lab inside Northern Arizona University's SICCS building.

Daryn Erickson, graduate student at Northern Arizona University, pulls a mosquito from its tube inside the lab in the SICCS building Wednesday, Jan. 5. Erickson is helping with a study gauging the risk of pandemic outbreaks in Maricopa County related to diseases commonly carried by mosquitos. 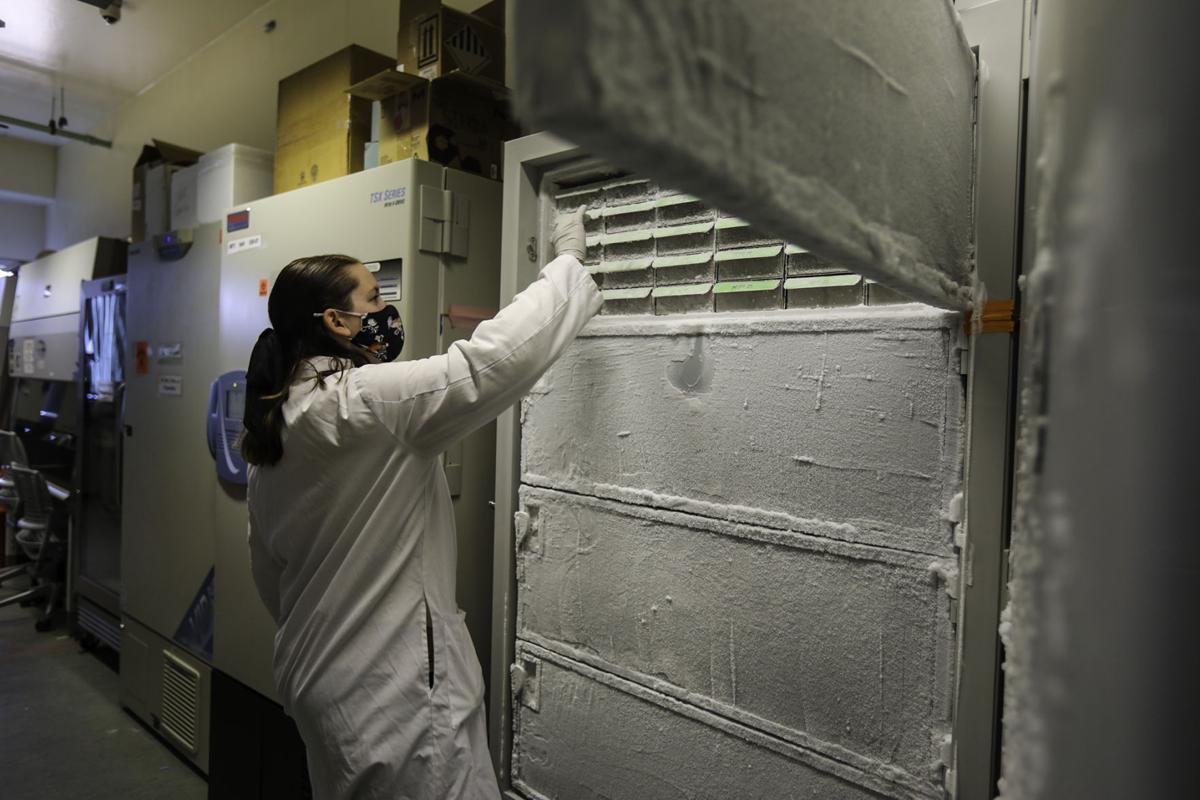 Daryn Erickson, graduate student at Northern Arizona University, pulls mosquitos out of the freezer inside the lab in the SICCS building.