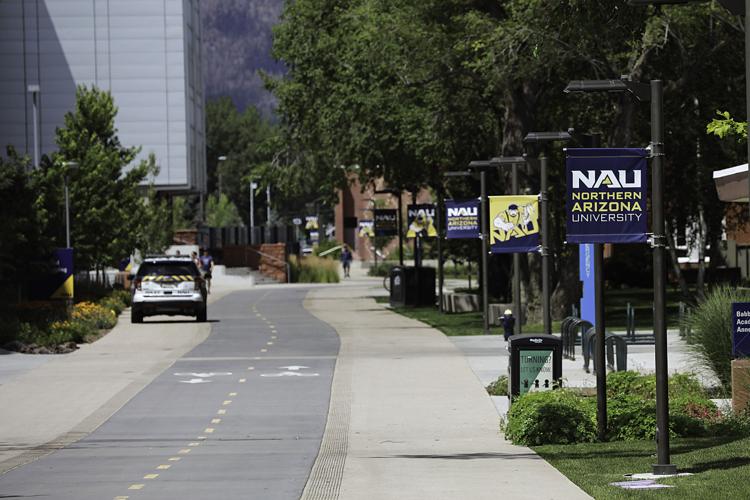 The north campus pedway outside of the Science and Health Building at Northern Arizona University as photographed July 30, 2020, before students move in.

At the most recent meeting of the Arizona Board of Regents’s (ABOR) Academic Affairs and Educational Attainment Committee, Northern Arizona University (NAU) presented five-year plans to expand several of its health programs.

The university is in the works to add nine program sites and grow enrollment by more than 1,600 students per year (a total growth of 181%) through 2027, according to a presentation by Executive Vice President and Provost Karen Pugliesi.

Over 1,500 additional students have enrolled in NAU health programs since 2012, she said, with the number of bachelor's of nursing graduates from the past five years (2017-21) being 765% more than those awarded between 2002 and '06. Her comparison of those same five-year periods showed an 880% increase in graduate degrees.

The Rounds Consulting Group had presented on the state’s allied health needs at the committee’s last meeting on March 24. Four program areas were looked at that were underrepresented in Arizona in 2020 when compared to nationwide standards. Of these, physical therapy had the largest Arizona job shortage (1,028), followed by occupational therapy (537), physician assistant (217) and audiology (147).

Many of NAU’s plans involve expanding programs to new statewide locations as well as enlarging them at existing sites where possible.

The largest focus is an expansion of the university's nursing programs. NAU plans to add three new accelerated program sites -- which produce licensure-ready graduates in 12 months -- across the state (north Valley, Tucson and Prescott Valley) and to move the Fort Defiance program to Tuba City.

In addition to expanding its accelerated nursing program in Flagstaff, NAU plans to expand the family nurse practitioner program there, and add programs for psychiatric nurse practitioners and a master's in nursing leadership, quality and patient safety.

The speech language pathology (SLP) program will expand in Flagstaff and a new site will begin in Yuma this summer, both including culturally relevant practice in the training.

It also will expand the online RN to BSN and concurrent enrollment programs, with the overall plan to increase “clinical initial licensure eligible graduates” by 231% by 2027.

According to Pugliesi’s presentation, NAU is currently the only Arizona public university with a master’s program in physician assistant studies. The program will be added to the school’s Flagstaff and Yuma locations, growing enrollment capacity by 250% though 2027.

She also said NAU is considering adding an online capstone doctoral program in the field.

“Physician assistants are important in the mix of healthcare professionals and community-based practice, [and they] enhance the impact of primary care doctors, which are in very short supply in Arizona," she said. So, the capstone program "would serve a growing demand for updated credentials for practitioners in this area and help us generate revenue to support clinical program expansion in physician assistant studies."

NAU plans to grow occupational therapy enrollment capacity by 167% by adding a hybrid option at the Phoenix Bioscience Core facility. Similarly, it expects to grow enrollments in its physical therapy program 250% by adding a “hybrid platform” and a new program site at its Yuma campus.

NAU’s fiscal year 2023 proposal for its New Economy Initiative (NEI) funds includes $10 million for nursing, and $9 million for allied and behavioral health. According to the presentation, some 106,000 jobs and $102.2 billion in economic output is expected out of the move among its impacts.

Other considerations toward meeting goals include the specialized accreditation and requirements for adding sites or enrollment each program would need, as well as staffing, facilities and clinical placements.

One solution Pugliesi mentioned was the development of simulation facilities -- which would reduce the number of clinical hours needed and pressure on placement capacity while supporting continuing education. Healthcare partnerships are also “central to our strategy for expansion,” she said.

When asked about accreditation, which had been a limiting factor in the past, Pugliesi said the university was using “a little bit of strategy and time frame.”

NAU is choosing to focus on programs at different rates, based on their varying requirements (for example, Pugliesi described nursing program requirements as “less restrictive”) and adding different program sites, rather than expanding cohorts in existing programs (another area that takes longer, as it has more restrictive requirements).

The university is looking into those longer-term accreditation processes as well, she said in response to a question.

“The lift involved in getting accreditation for a new site is a heavier lift, meaning there’s more substantial documentation and process required, but there isn’t the same kind of constraint on how frequently you can do that and how long you have to wait after,” she said.

The items she mentioned as having specific timelines include the SLP program in Yuma (set to begin this summer), the hybrid occupational therapy program (“in the next year”) and nursing program expansions (assuming hiring goes well “over the course of this coming year.”.

The full committee meeting, including Pugliesi’s presentation, is available on ABOR’s YouTube.

Northern Arizona Chess Center’s (NACC) Summer Chess Academy has returned in person after a few years off due to the pandemic. Students from sc…

The Arizona Board of Regents approved fiscal year 2023 budgets for Arizona’s three public universities at its most recent board meeting, held …

At its most recent meeting, Flagstaff Unified School District’s (FUSD) governing board approved a proposed budget for the 2023 fiscal year.

The Flagstaff Unified School District (FUSD) has called for an election to authorize a $100 million bond in November 2022. If approved, the bo…

In its June 14 meeting, the Flagstaff Unified School District’s (FUSD) governing board called for a special budget override election to be hel…

Northern Arizona University student and regional rodeo champion Stade Riggs will be heading to Casper, Wyoming, to compete in the College Nati…

Farmer says Amtrak crash could have been averted

Farmer says Amtrak crash could have been averted

The north campus pedway outside of the Science and Health Building at Northern Arizona University as photographed July 30, 2020, before students move in.