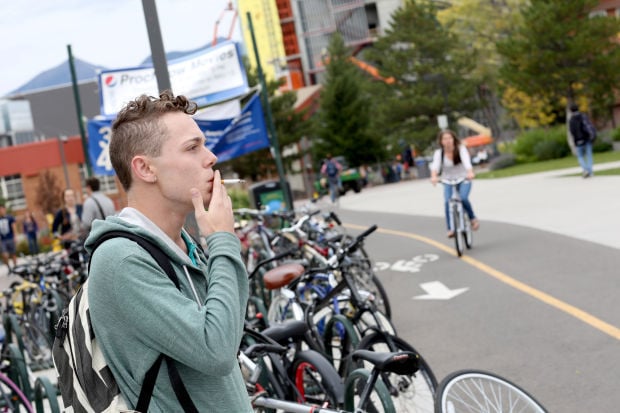 James Moreland smokes a cigarette near the student union at Northern Arizona University in this file photo from 2014. (Jake Bacon/Arizona Daily Sun) 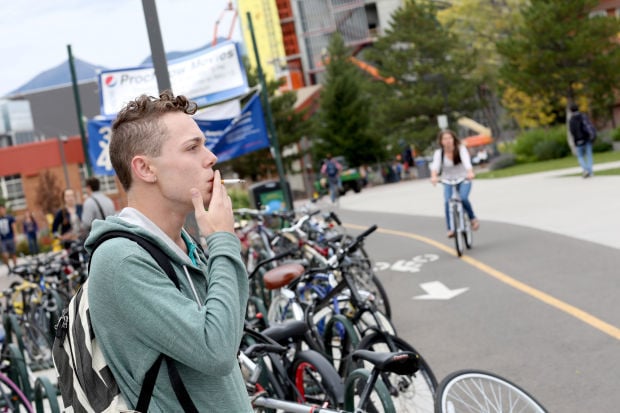 James Moreland smokes a cigarette near the student union at Northern Arizona University in this file photo from 2014. Effective July 1, 2015 all tobacco products were banned on campus.

Members of NAU’s Student Health Advocacy Committee have been meeting with faculty and staff this week to garner support for a policy that would make the Mountain Campus kick the habit.

The committee has been working on a tobacco-free campus policy since 2011, when it sent out a survey asking students what they felt were the biggest health concerns on campus. Currently, smoking is prohibited only in university buildings and university-owned vehicles.

“Tobacco use, cigarette litter and second-hand smoke were all things that they identified as problems,” said SHAC President and NAU senior Kelsey Pruett. “As the Student Health Advocacy Committee, we said, ‘If it’s a problem for the students, it’s a problem for us.’”

What followed were three years of research on the kinds of tobacco-free campus policies that had proved most effective at other institutions.

SHAC members discovered that NAU was the only one of Arizona’s three major public universities without a tobacco-free campus. Other in-state schools, like the Embry-Riddle Aeronautical University’s Prescott campus and Maricopa Community Colleges, also had tobacco-free policies.

There are now more than 1,400 campuses in the United States that are either smoke-free or completely tobacco-free.

“We found that, actually, this is kind of a nationwide movement that’s been happening pretty recently,” said SHAC advisor Melissa Griffen.

Under the proposed NAU policy, the use of tobacco products would not be allowed in any university facilities, vehicles, residence halls or outdoor spaces. Cigarettes, e-cigarettes, hookah, e-hookah, chew, snuff, cigars, pipes would be among the prohibited items.

Rather than punishing tobacco users, the policy drafted by SHAC would call for students, faculty and staff to approach anyone seen using tobacco, educate them about the tobacco-free policy and offer cessation resources.

The SHAC students timed how long it would take to walk off campus from any of the smoking hot spots on campus. Even going at a leisurely pace, it took them no more than five minutes.

“Our main goal with this is really just changing the social norms on campus to include healthy lifestyle choices while being on campus,” Pruett said. “If you aren't seeing people using tobacco on campus, you’re less likely to use it.”

The policy does include a caveat that would allow chronic violators of the tobacco-free policy to face disciplinary action starting in the 2015-2016 school year.

NAU’s Health Promotions Office has conducted at least three surveys gauging attitudes about tobacco use among students. The most recent study found that less than 12 percent of students reported using tobacco products in the past month.

“We have a fairly low rate of tobacco users,” Griffen said.

In each survey, more than 50 percent of respondents said they would support a tobacco-free campus. Several respondents described walking through another person’s smoke at the entrance to a building as an “annoyance,” while others complained about litter from cigarette butts.

SHAC secretary and NAU senior Dani Goettl said in addition to the well-known health risks associated with tobacco use and second-hand smoke, litter and smoke from tobacco products pose an environmental risk to the campus, which is supposed to become carbon-neutral by 2020, according to the university’s Climate Action Plan.

“NAU is beautiful and green and clean,” Goettl said. “We want to keep our campus that way and be known for that.”

SHAC recently brought the tobacco-free policy to President Rita Cheng, whose last job was at a smoke-free campus.

“She was very well-educated on the smoke-free and tobacco-free campuses,” Pruett said.

Cheng said she wanted to get a formal vote or “resolution” from the faculty senate and classified staff. She also wanted an opinion from the Native American cultural center.

In addition, Cheng wanted to see a survey asking every student at NAU whether they wanted a tobacco-free campus.

The Health Promotions Office sent the survey to all student email accounts. It will remain open until Oct. 17. By the end of last week, 2,235 students had taken the survey. Of those students, 55 percent said they wanted NAU to be a tobacco-free campus.

SHAC also collected more than 2,800 student signatures in favor of the tobacco-free policy last semester. Signatures can still be added to the petition in the Health Promotion Office on the NAU campus.

”The (University of Arizona) and (Arizona State University) are much larger in population and campus layout than NAU,” Pruett said. “If it’s successful on that big a campus with that many students, it absolutely can be successful here.”

Reporter Michelle McManimon can be reached at mmcmanimon@azdailysun.com or 556-2261.
4 comments

James Moreland smokes a cigarette near the student union at Northern Arizona University in this file photo from 2014. (Jake Bacon/Arizona Daily Sun)

James Moreland smokes a cigarette near the student union at Northern Arizona University in this file photo from 2014. Effective July 1, 2015 all tobacco products were banned on campus.