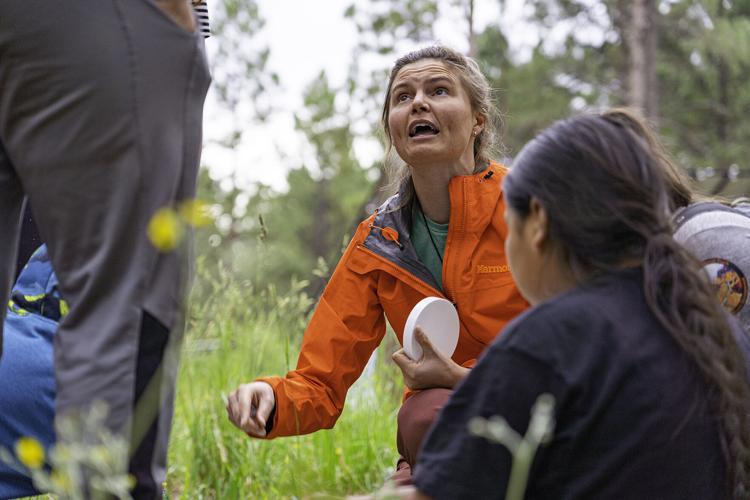 Kayla Arendt teaches campers at Camp Colton about hydrology Tuesday afternoon. Arendt has worked with the camp for a number of years before becoming a sixth-grade science teacher. 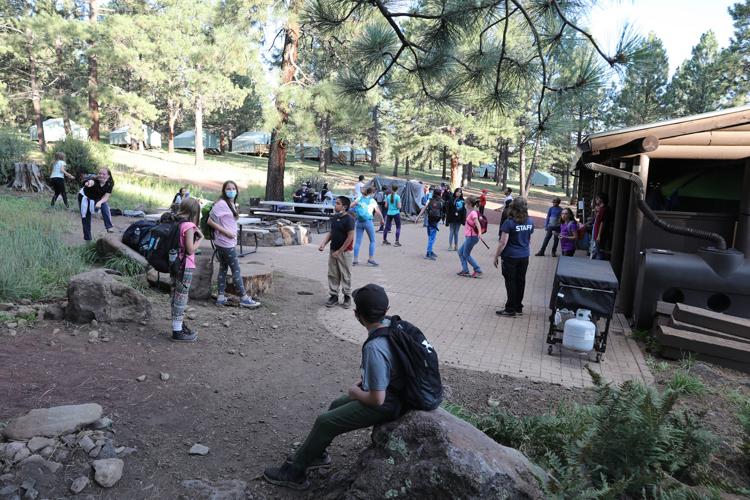 Campers wait to choose an evening activity at Camp Colton in 2021.

Middle school students from Flagstaff, the Grand Canyon and Pine-Strawberry will be spending a week at Camp Colton in July sharpening their science skills, participating in the camp’s STEM Environmental Enrichment and Discovery (SEED) Summer Experience that gives kids a chance to participate in hands-on environmental research.

It's the second year Camp Colton has offered its SEED Summer Experience. Developed by nonprofit Friends of Camp Colton -- which runs the camp alongside the Flagstaff Unified School District -- the program gives students a chance to explore science in a way they might not get to otherwise.

Most campers are rising seventh- and eighth-grade students who were nominated for scholarships by their teachers based on their financial need and interest in science. Around 80 campers are participating this year over the course of two weeklong sessions (42 this week and 39 the next), which Wilder said was more than double last year’s total.

Most kids in the SEED Summer Experience have spent time at Camp Colton with their school in sixth grade, so the intent is to build on the earlier experiences.

“The real focus of Camp Colton is outdoor environmental education,” said Ari Wilder, Friends of Camp Colton’s executive director. “ ... We really wanted to give kids an authentic scientific experience in the field and that’s what this is.”

The students are divided into groups focusing on one of four research topics related to climate change: soil ecology, hydrology, native organisms and fire ecology. Community experts, local teachers and camp educators then lead them in selecting a research question and carrying out a project to investigate it over the course of the week.

On a recent Tuesday afternoon, the campers were busy developing questions that would guide their research for the rest of the program. They studied maps labeled with the outlines of historical fires, different water sources, trails and the camp’s location as they discussed the best ways to answer their question.

“We give the teachers time to teach them a little bit so they know what tools are accessible and what professionals might do,” said program coordinator Jackson Carranco. “ ... This group might be wrestling with three different questions that they want to potentially study, and they’re just trying to figure out which one might work best — where do we go if we’re going to do this, what’s your experience been as an expert … then they go out and do it.”

On Tuesday, the group was identifying tanks in the area that they could use to study the effects of fire on water sources. They had compiled a list of seven in the ponderosa pine biome that they could sample and make comparisons.

“We don’t want to go too many places, otherwise ... we’ll get little bits of data from every single one. I don’t know if it’s just me, but I’d rather get a lot of data from one instead of like scattered everywhere,” Jeffers added.

Since the program is an overnight camp, students also participate in more traditional camp activities such as archery, tie-dye and making ice cream. Local experts also visit to present on topics like astronomy or local animals.

At the end of the week (the camp runs Sunday night to Friday afternoon), the campers will host an open house for their families, where they will share what they have done during their research. This will be the camp’s first time holding the showcase event, since last year’s program was “deep in COVID” and projects were displayed in a video instead.

Major funders for both Camp Colton and this program include the Arizona Community Foundation of Flagstaff, the Geo Family Foundation and the APS Foundation as well as a number of individual donors.

The SEED Summer Experience is also a professional development opportunity for the science teachers involved.

“Our goal is that the science teachers are learning along with the students and that hopefully some of the things they learn up at Camp Colton and through this project, they’ll bring back into the classroom next year,” Wilder said.

More about Camp Colton can be found at friendsofcampcolton.org.

FUSD board considers policy changes based on state law

Flagstaff Unified School District’s (FUSD) governing board had first readings of 13 district policy revisions in its meeting this week, based …

School started for most Flagstaff students Aug.10 and, while learning looks closer to what it did in 2019, some students are hoping not to ret…

Kayla Arendt teaches campers at Camp Colton about hydrology Tuesday afternoon. Arendt has worked with the camp for a number of years before becoming a sixth-grade science teacher. 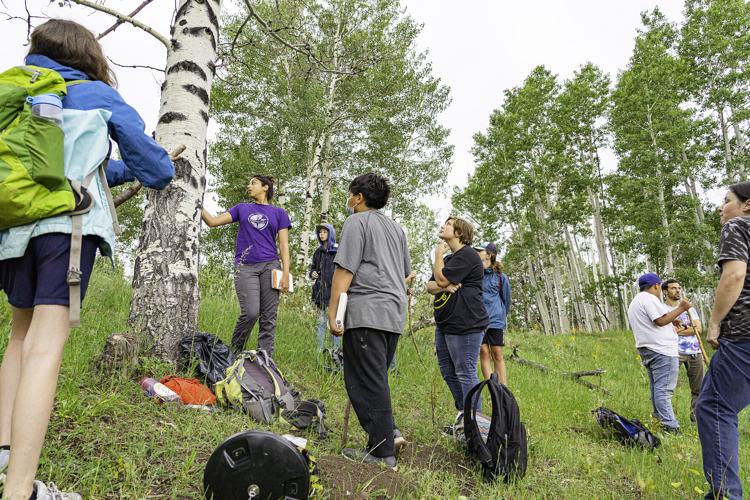 Sneha Vissa (purple) teaches campers at Camp Colton on Tuesday about Aspen Trees. Vissa is an entomologist and is one of the experts who come to camp to help educate campers. 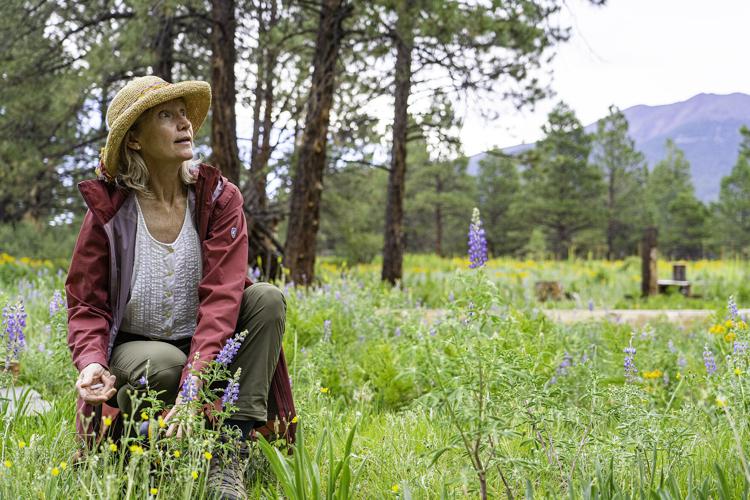 Nancy Johnson, a regions professor at Northern Arizona University, teaches a group of campers soil ecology on a cloudy Tuesday at Camp Colton. 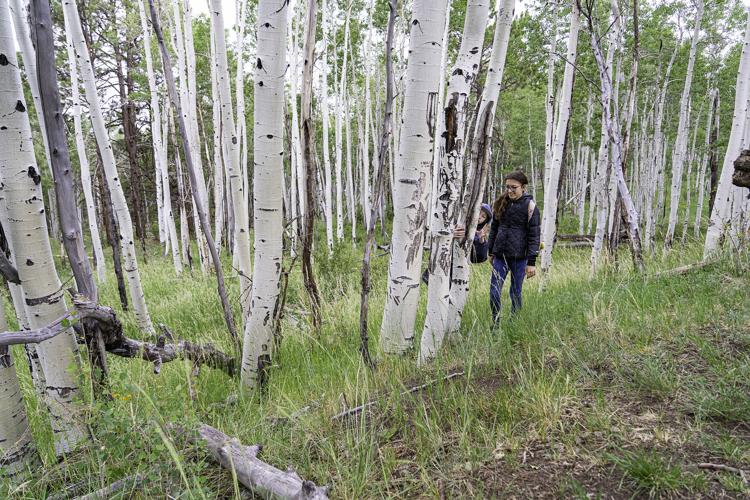 Kali, a camper at Camp Colton, studies the differences in aspen trees on Tuesday. Kali and other campers were apart of a group called Native Organisms and were learning how to spot discrepancies between trees. 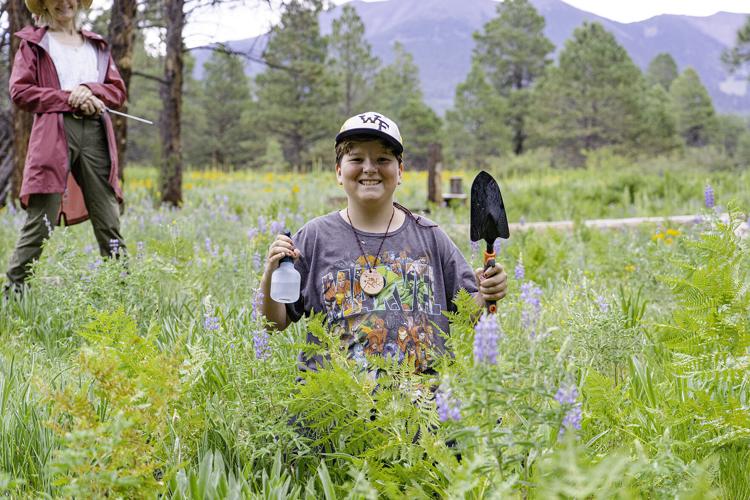 Campers wait to choose an evening activity at Camp Colton in 2021.