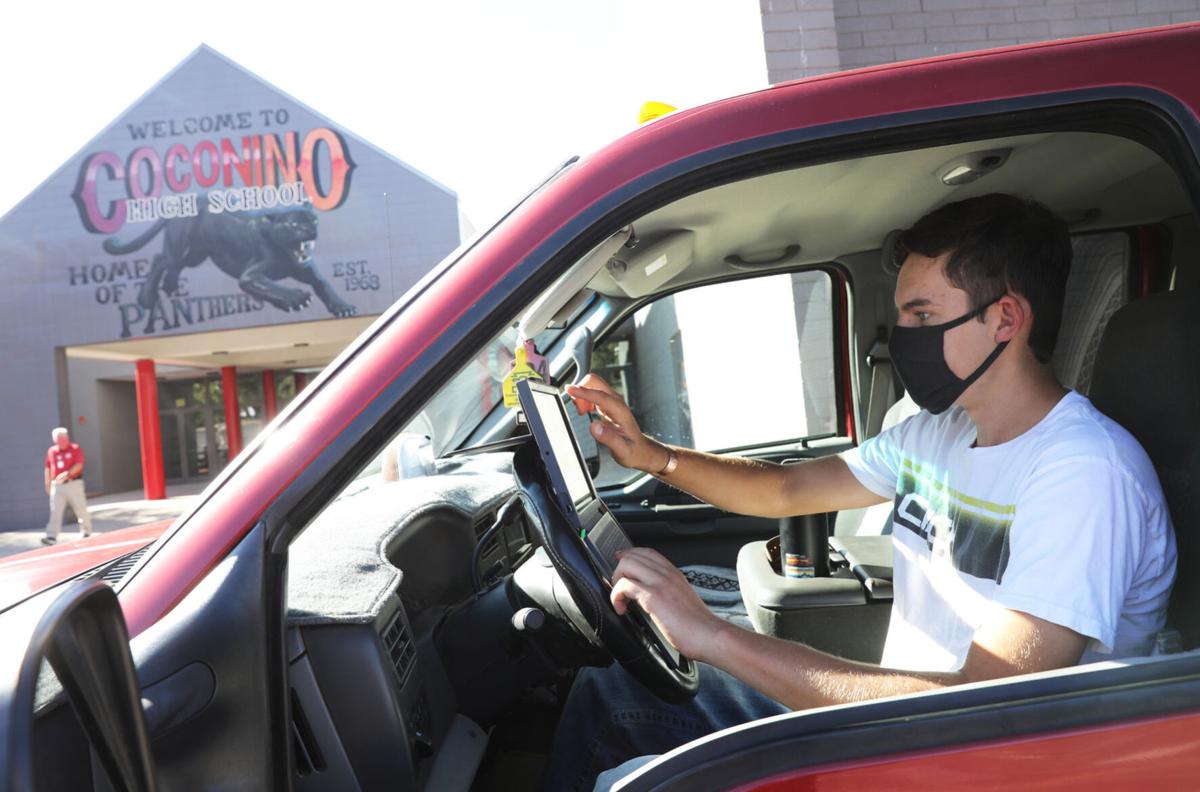 Chase Sweeter spent Monday morning participating in reverse ditch day in the parking lot of Coconino High School. Students at both Coconino and Flagstaff high schools showed up to sign in to their Zoom classes at the schools as a break from remote learning due to the COVID-19 pandemic. 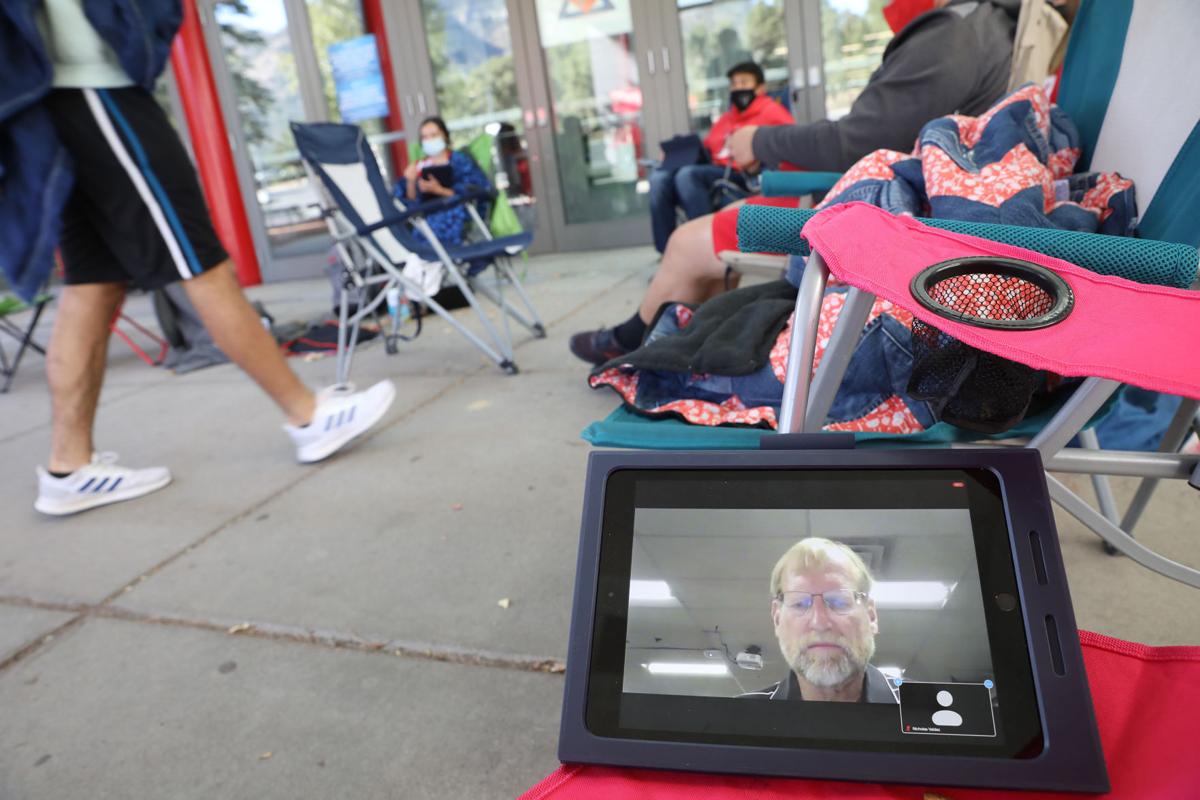 Ted Lyons is seen on an iPad as he teaches a college math class at Coconino High School. His students came to log into the Zoom class outside the school as part of a reverse senior ditch day. 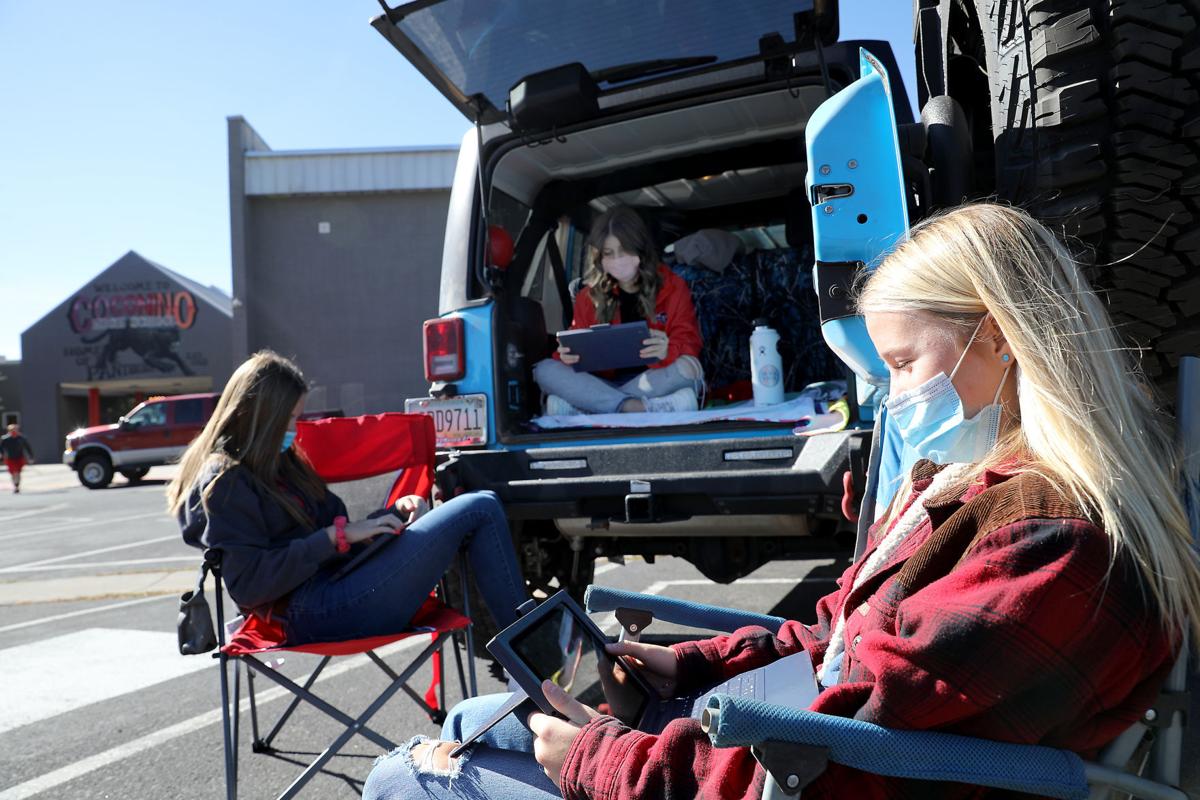 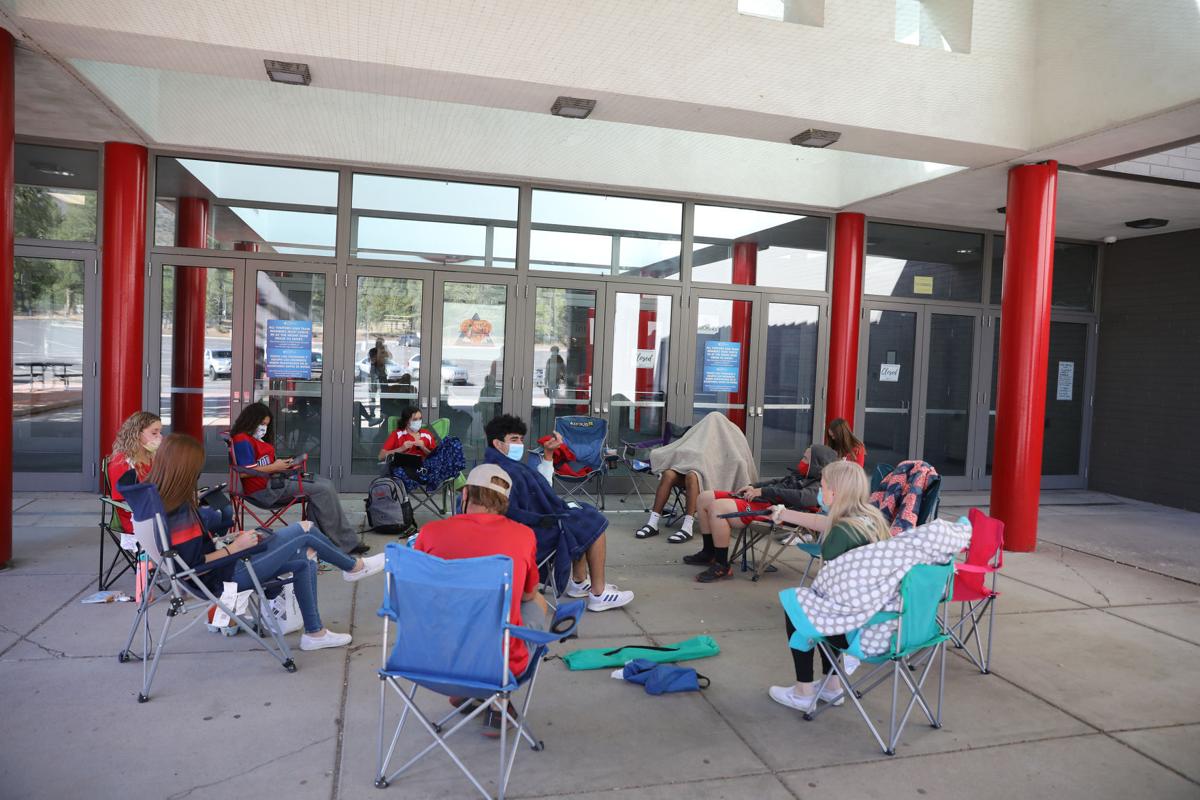 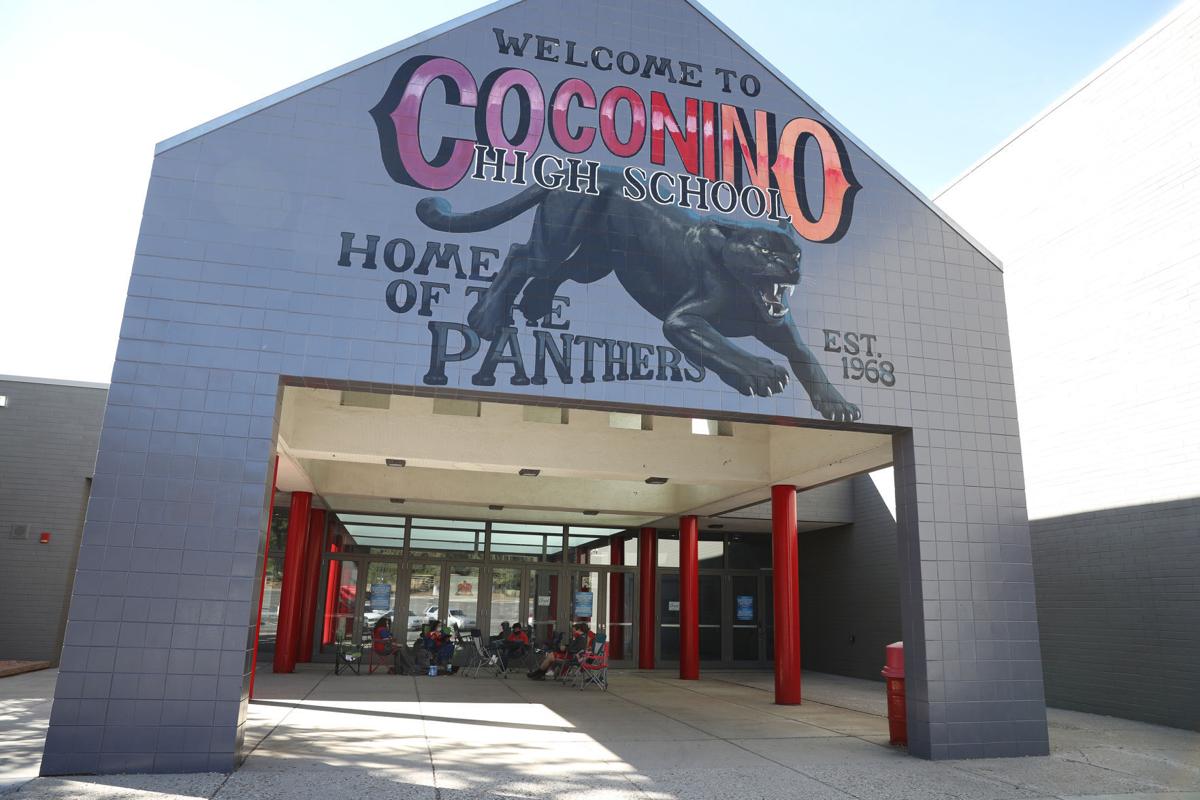 While senior ditch day may not top the list of high school experiences when compared to milestones like graduation, this tradition still managed to withstand the year of COVID-19 in Flagstaff, albeit with some changes.

Instead of staying at home in their pajamas or gathering elsewhere in town during a normal school day, students at Coconino High School arrived on campus by 8 a.m. on Monday, in time to log on for the first period of their online school day.

They called it “Reverse Ditch Day.”

“We want to go to school, so we’re doing school at school with masks on to show that we can follow rules and that we love school, love being here,” said Shelby Hayes. “It’s our senior year, so it’s really important to us.”

Shelby was part of a group of masked CHS seniors who gathered in the shade of the school’s north entrance Monday morning, wrapped in blankets as they sat in socially distanced lawn chairs, attending their classes using the school-issued iPads they held in their laps.

When asked how remote learning is going, members of the group said this new form of learning is both draining and challenging, one even calling it “awful,” to the nods of their classmates. Several of them referenced how difficult it is to stay focused on school when not physically in a classroom, especially with fewer hands-on activities and longer classes.

Instead of six-period days like in the past, Flagstaff Unified School District’s middle and high school students are currently enrolled in only three classes per quarter, with classes lasting 95 minutes each. This schedule is aimed to decrease transitions during the day and mixing of students if in-person instruction resumes.

Many of these seniors agreed they missed the social interaction most; their glee at being back together, even if not in a classroom, was evident as they sat outside the school Monday, their laughs dispersing into the parking lot, where more students were tuning into their classes.

Chase Sweeter kept his candy red pickup truck running as he virtually attended his morning math class, a dual enrollment class that counts for both high school and college credit, from the driver’s seat, his iPad propped against the steering wheel.

“I really hope that, by us doing this, some of the school board members will see that we are really trying to make an effort, not just to go back to classes with our friends, but to truly get the learning experience that we need,” he said, noting how beneficial it would be if even just upperclassmen were able to return to school.

Chase explained that, whereas in the past he could have stayed after class to ask a teacher for help, it has been more difficult to receive the support he needs while completing classes online. He also believes the online format is making it harder to retain the information that is presented in class.

“This is really tough,” he said, glancing down at his iPad.

Younger students also joined in Reverse Ditch Day, eager to prove that they, too, are ready for a return to campus.

“We’re just trying to make a point that we’re responsible enough to come to school and follow all the restrictions so we can get a better education,” said junior Avery Rhoton. “I think that online school at home is really hard for a lot of families.”

Avery joined her cousin Livia Rhoton and friend Cierra Derr, also juniors, in attending class from their car in the CHS parking lot Monday. They arrived at 7:50 a.m., just in time for first period, and planned to stay all day.

Since the school year began online last month, Avery has not only attended her classes virtually, but she has also helped her younger siblings with their schoolwork when their parents are not home. She said it was nice to be spending a school day at school instead of in her bedroom.

For Livia, attending school remotely has been a struggle because she said the internet can be unreliable at her family’s home off Townsend-Winona Road, sometimes causing her to miss parts of her classes. She also explained her family is in the process of selling the house, which creates some scheduling conflicts.

“We’ll have people come look at our house so then we have to go over to someone else’s house. It’s such a pain. We can’t do school at home,” Livia said.

The desire to return to school shared by these “ditchers” echoed many of the comments submitted to the FUSD Governing Board last week for its discussion of the district’s return to school plan. After more than six hours of presentations, public comments and discussion, the board did not make a final decision on when to resume in-person classes, though it agreed in-person learning would not begin until Oct. 22 at the earliest.

The board will next discuss the reopening plan in a special meeting Oct. 6, where it will focus on phased reopening options.

Remote learning not the best fit for special education, but teachers, families doing their best

Like their peers, Flagstaff Unified School District’s special education students and their families have become very familiar with remote lear…

There is still work to be done within Flagstaff Unified School District to improve equity and diversity among students and staff, according to…

NPA classes to remain online until at least January

As Flagstaff Unified School District officials wait for the community to meet health benchmarks that would allow for reopening schools, the te…

Chase Sweeter spent Monday morning participating in reverse ditch day in the parking lot of Coconino High School. Students at both Coconino and Flagstaff high schools showed up to sign in to their Zoom classes at the schools as a break from remote learning due to the COVID-19 pandemic.

Ted Lyons is seen on an iPad as he teaches a college math class at Coconino High School. His students came to log into the Zoom class outside the school as part of a reverse senior ditch day.