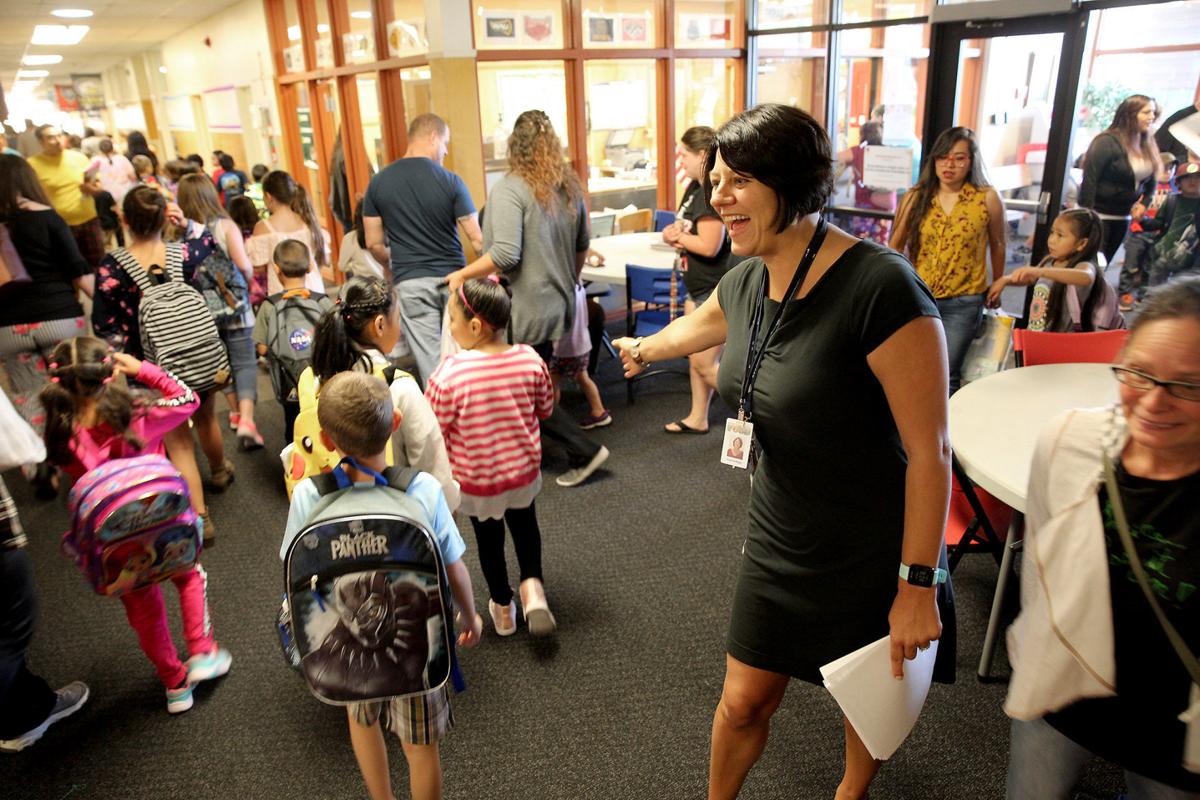 Principal Ginni Biggs greets a sea of students looking for their classrooms on the first day of school at Thomas Elementary School Thursday morning. 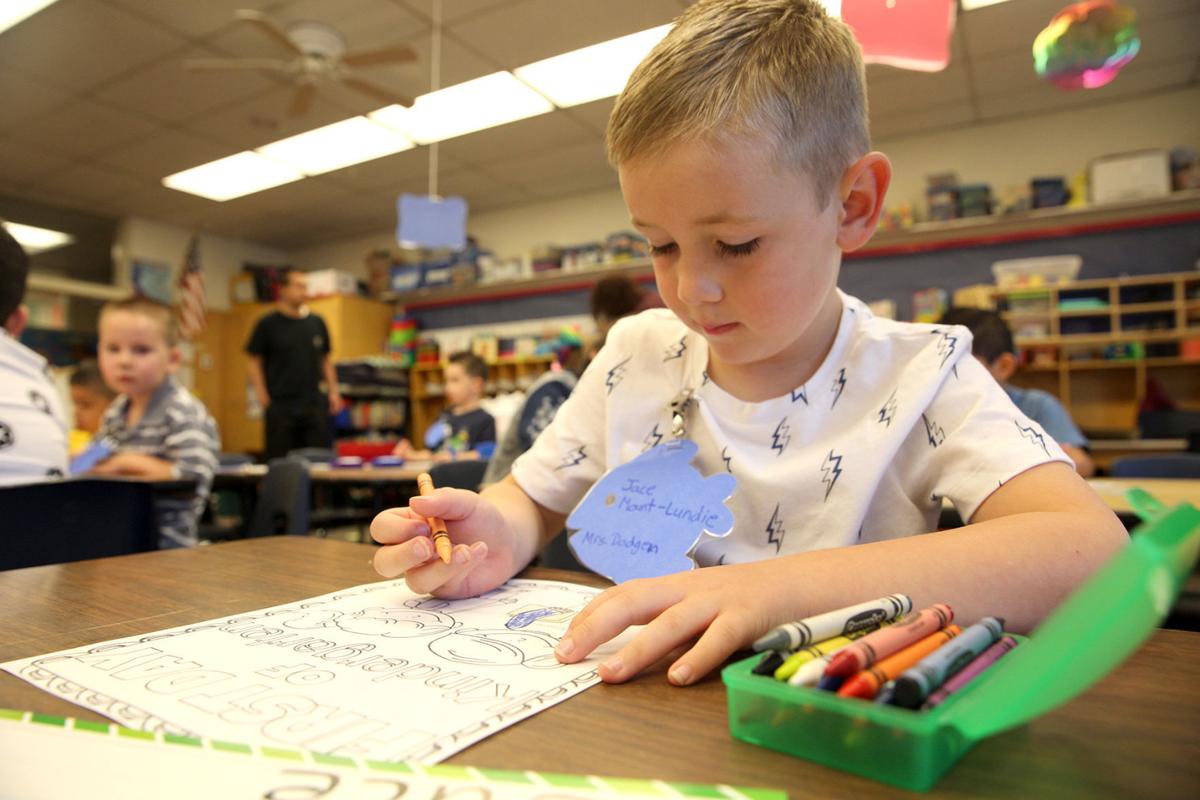 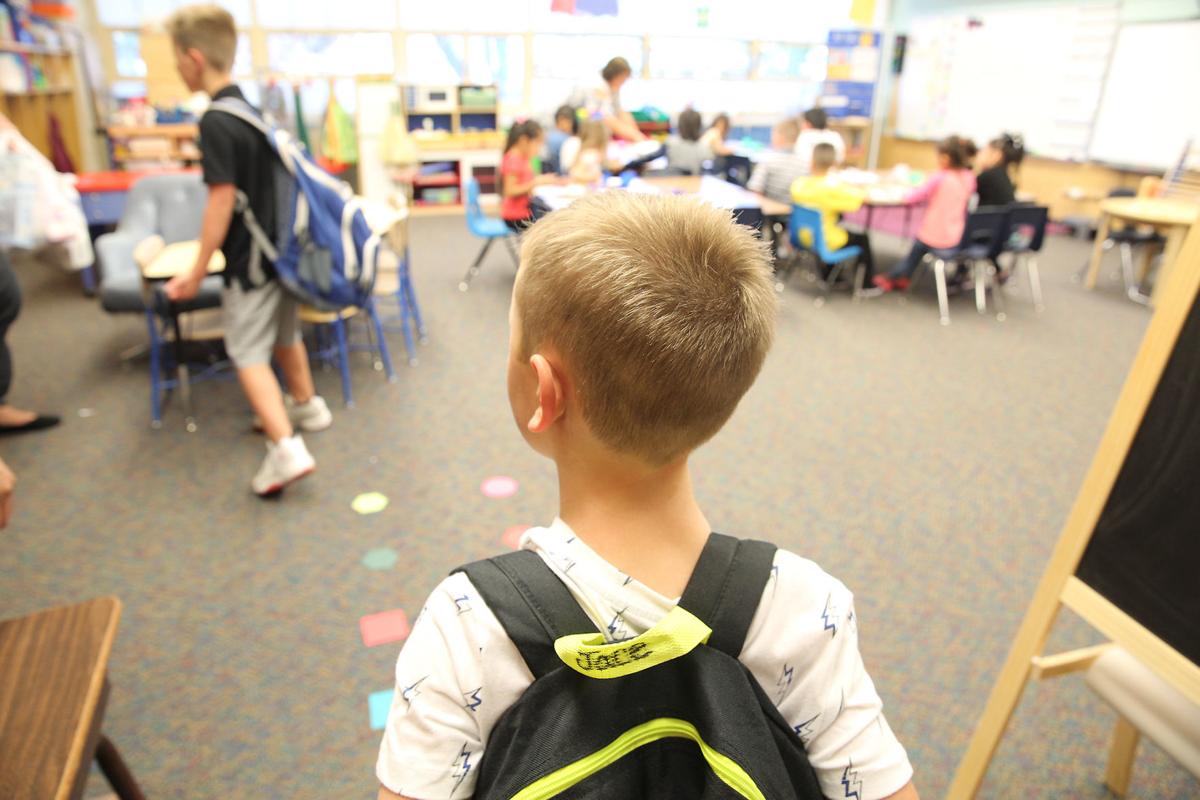 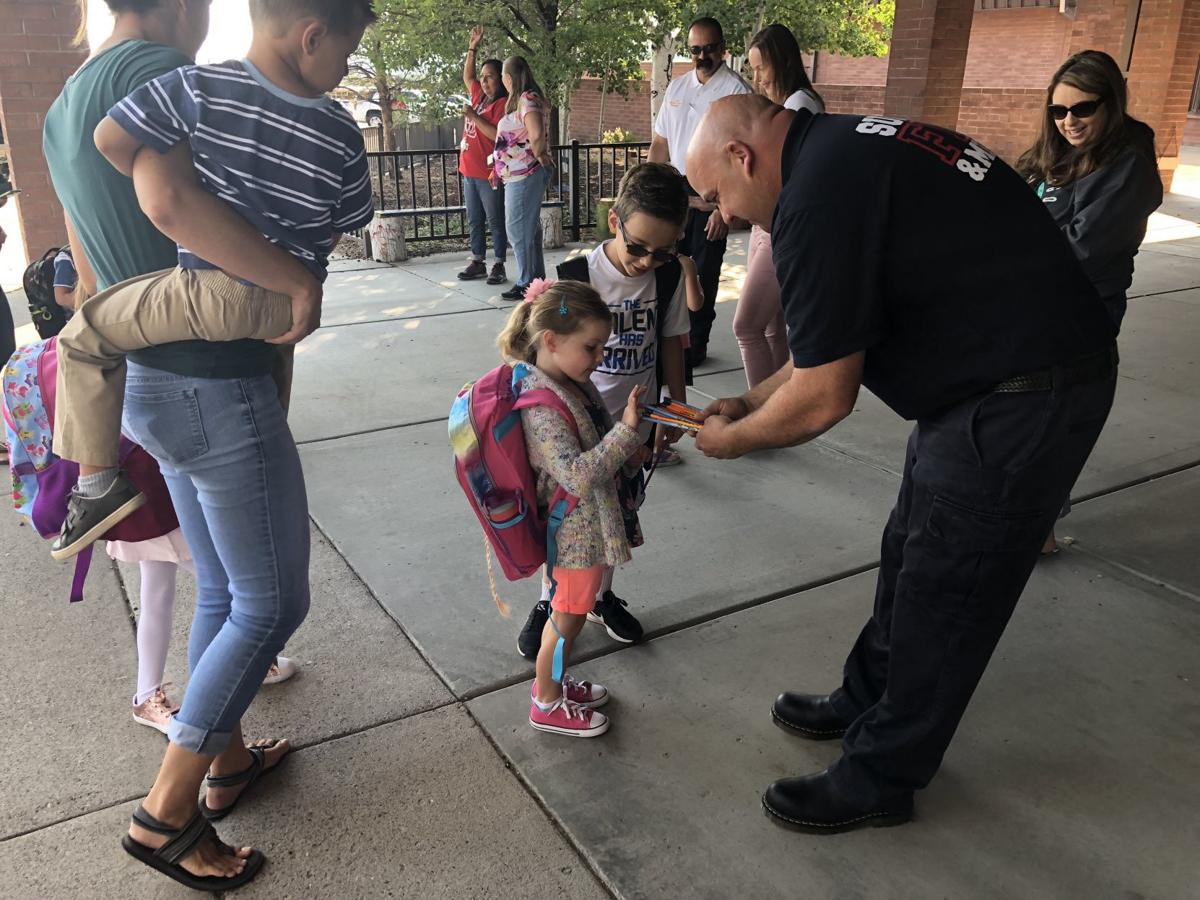 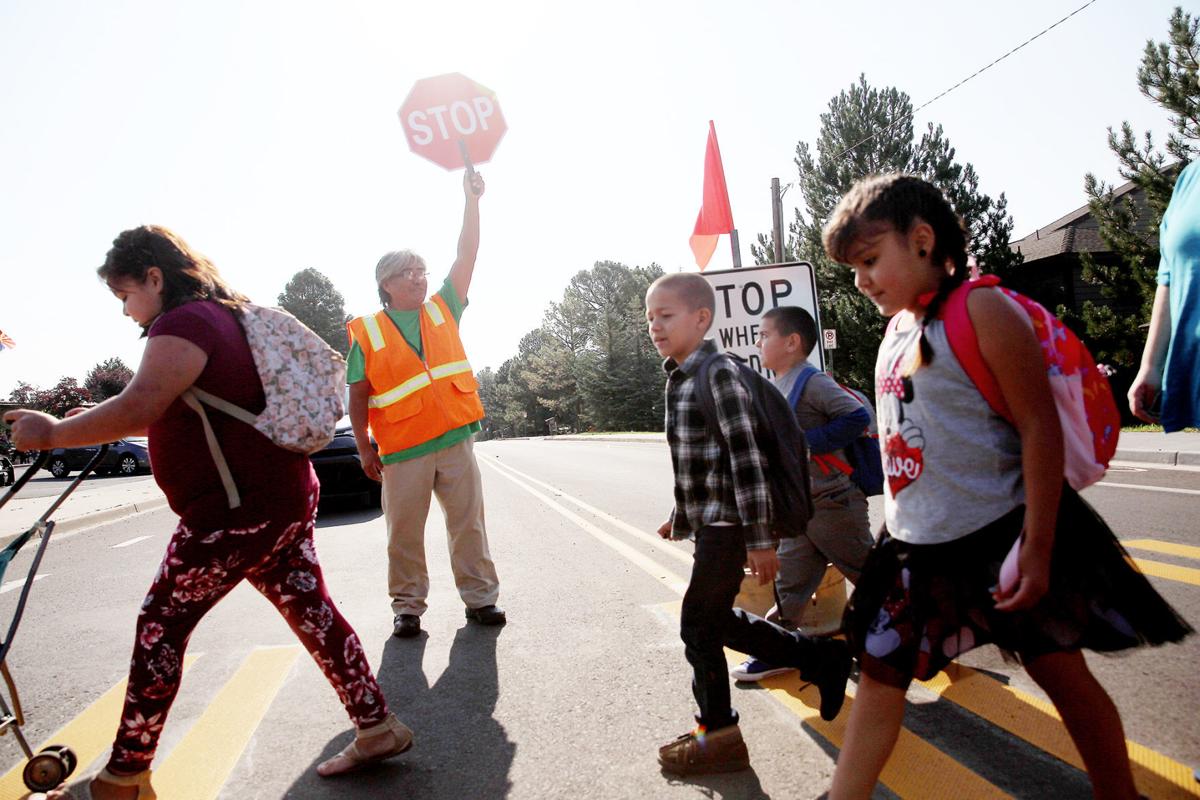 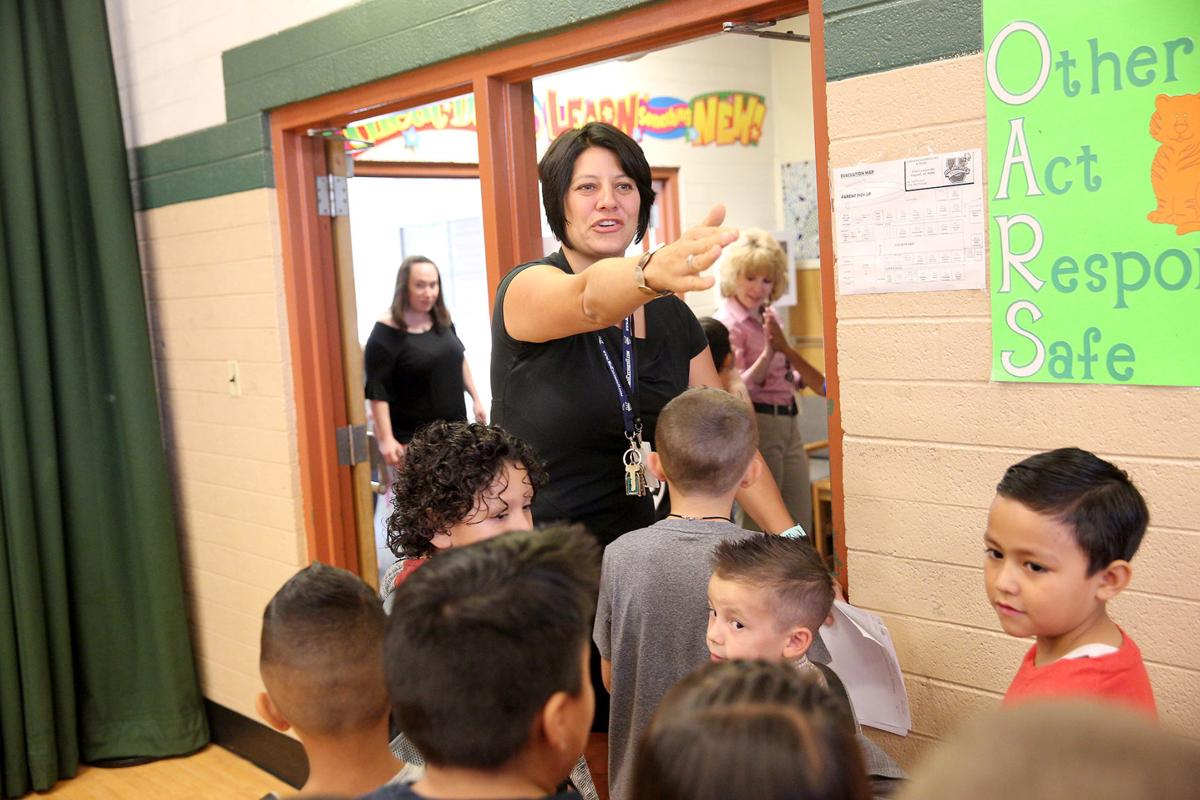 Thomas Elementary School principal Ginni Biggs guides students to their classrooms Thursday morning on the first day of school. It was also her first day as school principal.

On Thursday, about 10,000 students in Flagstaff went to their first day of school for the 2018-19 school year.

It was the opening day for 13 of 15 Flagstaff Unified School District schools, with the exception of modified year-round schools Killip Elementary and Leupp Public School.

FUSD Spokesperson Karin Eberhard visited the schools throughout the day, and she said things ran smoothly. Eberhard said it was impressive to see the kids in their seats and working within 10 minutes after the bell rang.

Principal Traci Elam-Gordon welcomed each student individually by name, and Summit Fire Department members were there passing out pencils to everyone who walked by.

Walking up with his mom and friends, Levi Woodruff, 5, was on his way to start kindergarten.

Levi said he was excited to be going to school and was most looking forward to time on the playground and learning about planets, adding that he loves the sun.

“I’m a little sad,” she said of her son going into his first official year of school, adding that she was excited for her other son, who started sixth grade at Sinagua Middle School that day.

Levi then met up with fellow kindergartner and best friend Teagan Minter, 5, to take a picture underneath letters on the wall in the front of the school that read “Sturgeon Cromer Elementary School.” While they stood next to each other with her arm on his shoulders, their moms snapped pictures on their iPhones and talked about their future plans.

“They’ve been best friends since birth,” said Teagan’s mom, Amy Minter. “They’re going to get married. She already puts his shoes on for him.”

Walking up on the other side of the school was Suger Quinones, 10, who is starting fifth grade.

Suger said she had a great summer but she’s really happy to be back at school.

“My favorite subject is science,” she said. “But I like everything about school.”

Over at Sinagua Middle School, it started to rain as hundreds of students streamed out of the building after the final 2:20 p.m. bell.

For elementary school, Shonto went Punto de Hózhó Elementary, a Flagstaff bilingual magnet school, where he studied Navajo. He said he was really excited to learn that Sinagua has a Navajo language class, and he’s looking forward to taking it.

When asked if he was nervous about starting sixth grade, Shonto nodded his head.

Shonto said he was a little intimidated last year when he visited Sinagua because of the building’s size and the amount of students. With more than 400 sixth-graders at his school, he was a little worried before showing up Tuesday morning, but said everyone was really nice to him on his first day.

For a video of the students and teachers on their first day of school, go to the Flagstaff Unified School District Facebook page.

Flagstaff teachers are collecting new and needed school supplies on Friday from noon - 5 p.m., and on Saturday and Sunday from 11 a.m. - 6 p.m. at both Flagstaff Walmart locations.

Editor's note: Following is a directory of Flagstaff schools for the 2018-19 school year. Some information may not be updated if efforts to co…

Principal Ginni Biggs greets a sea of students looking for their classrooms on the first day of school at Thomas Elementary School Thursday morning. 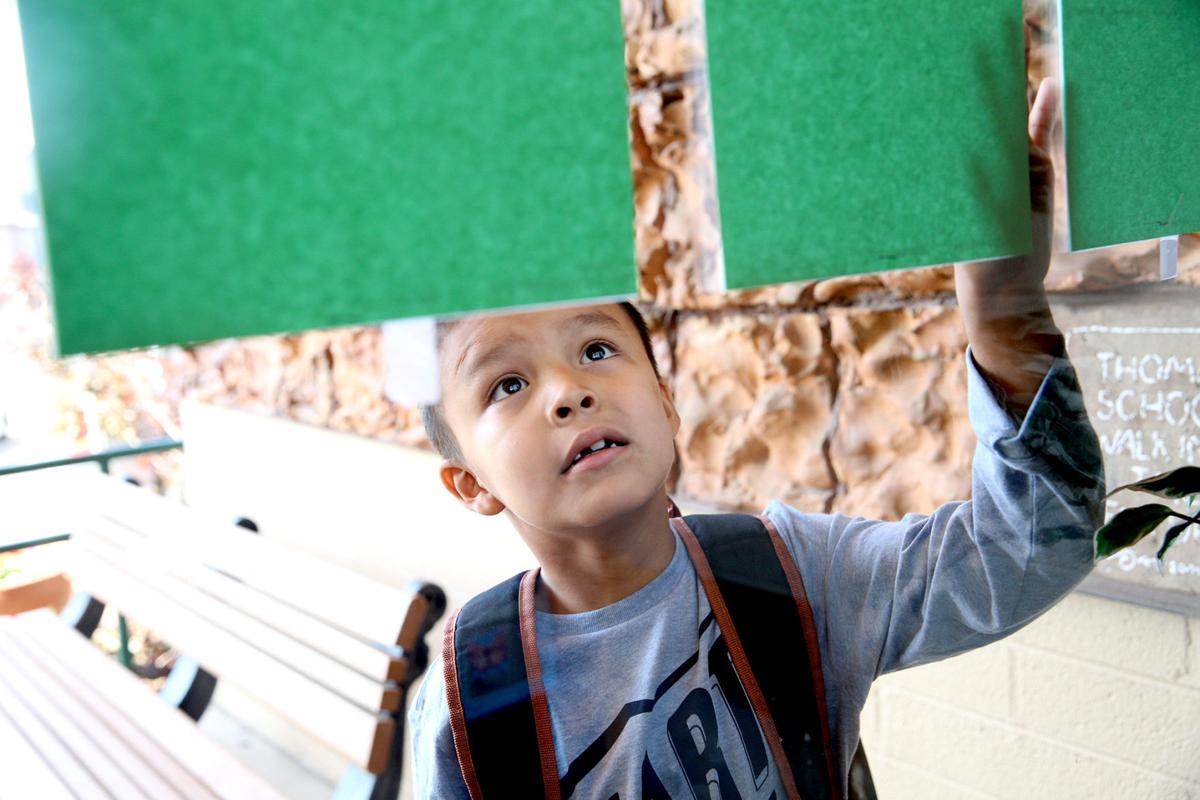 Kylan Dick, 7, looks for his new second grade teacher Thursday morning on a set of class lists posted on the front door of Thomas Elementary School. For many Flagstaff students Thursday marked the end of summer with the first day of school. 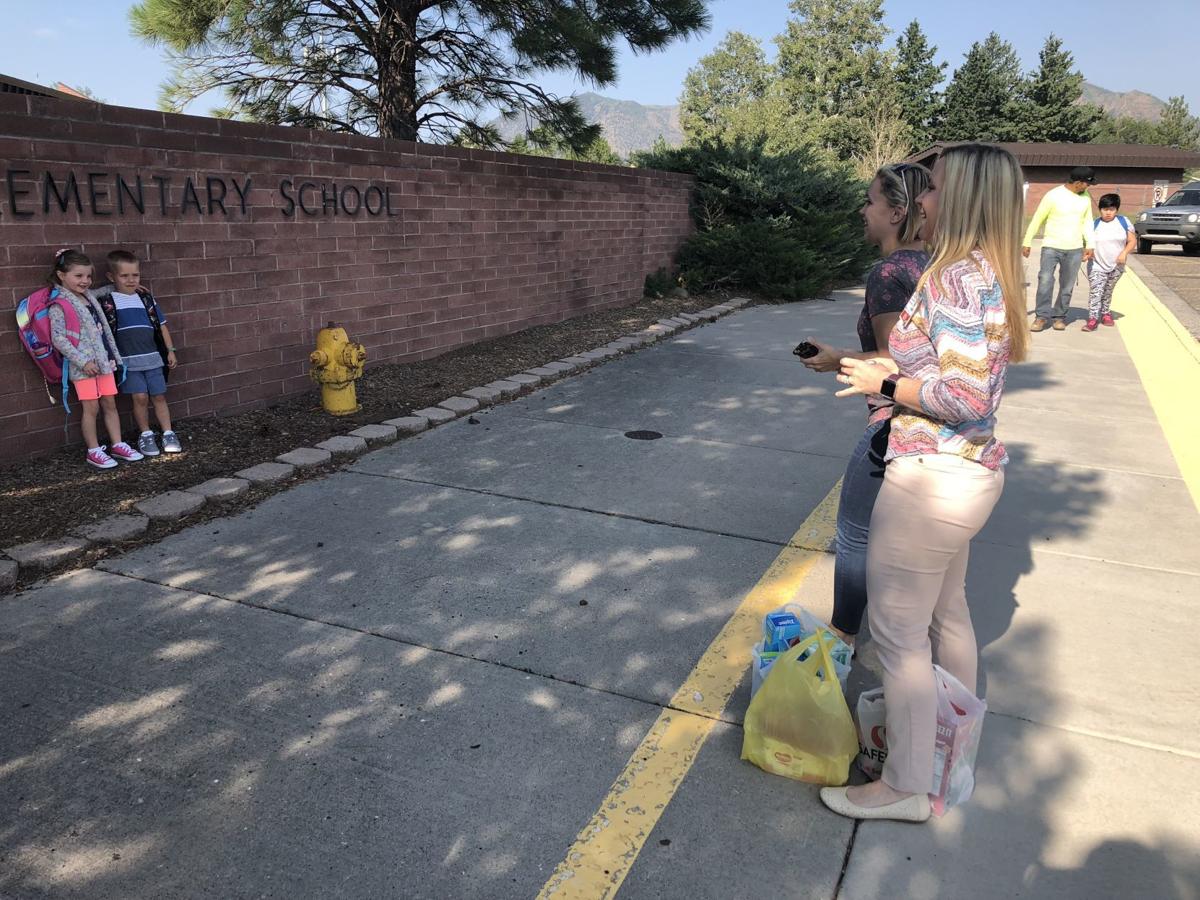 From left: Teagan Minter and Levi Woodruff pose on their first day of kindergarten while their mothers, Krystina Woodruff and Amy Minter take photos of them. 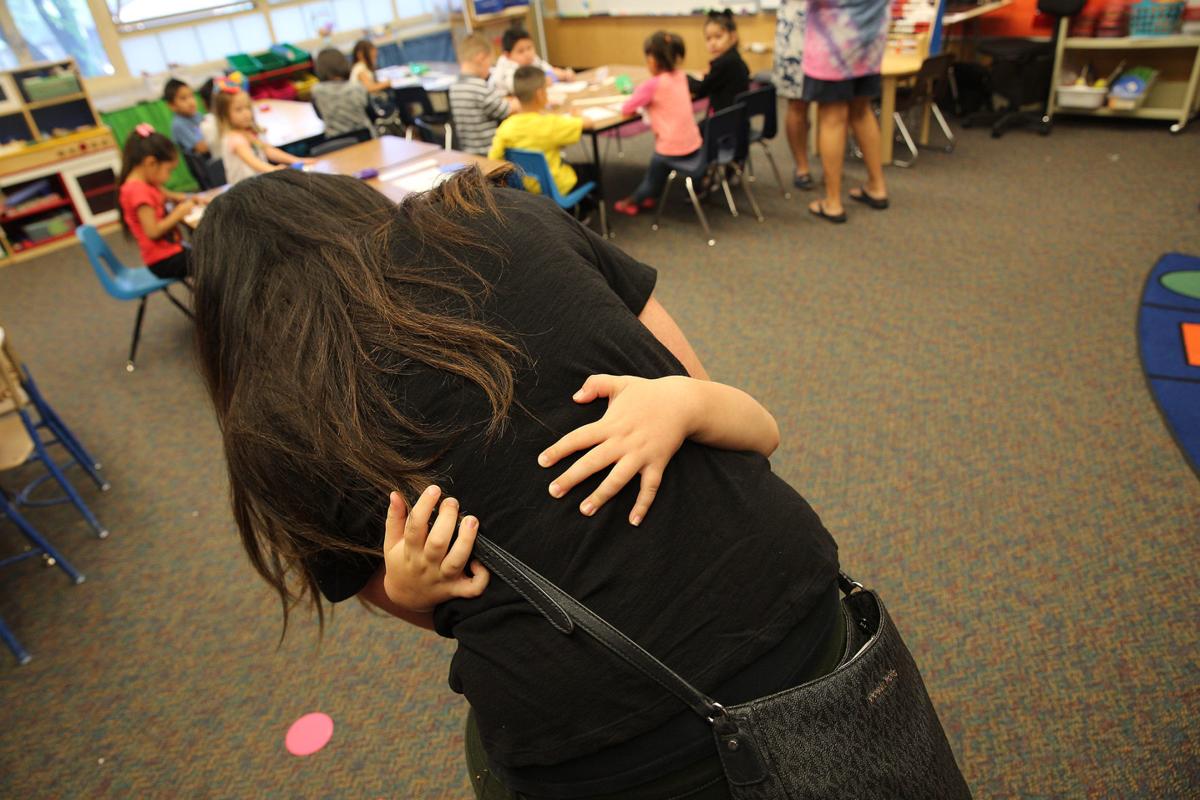 A kindergarten student gives his mom one last hug Thursday morning on the first day of school in Mindy Dodgen’s classrom at Thomas Elementary School.

Thomas Elementary School principal Ginni Biggs guides students to their classrooms Thursday morning on the first day of school. It was also her first day as school principal.