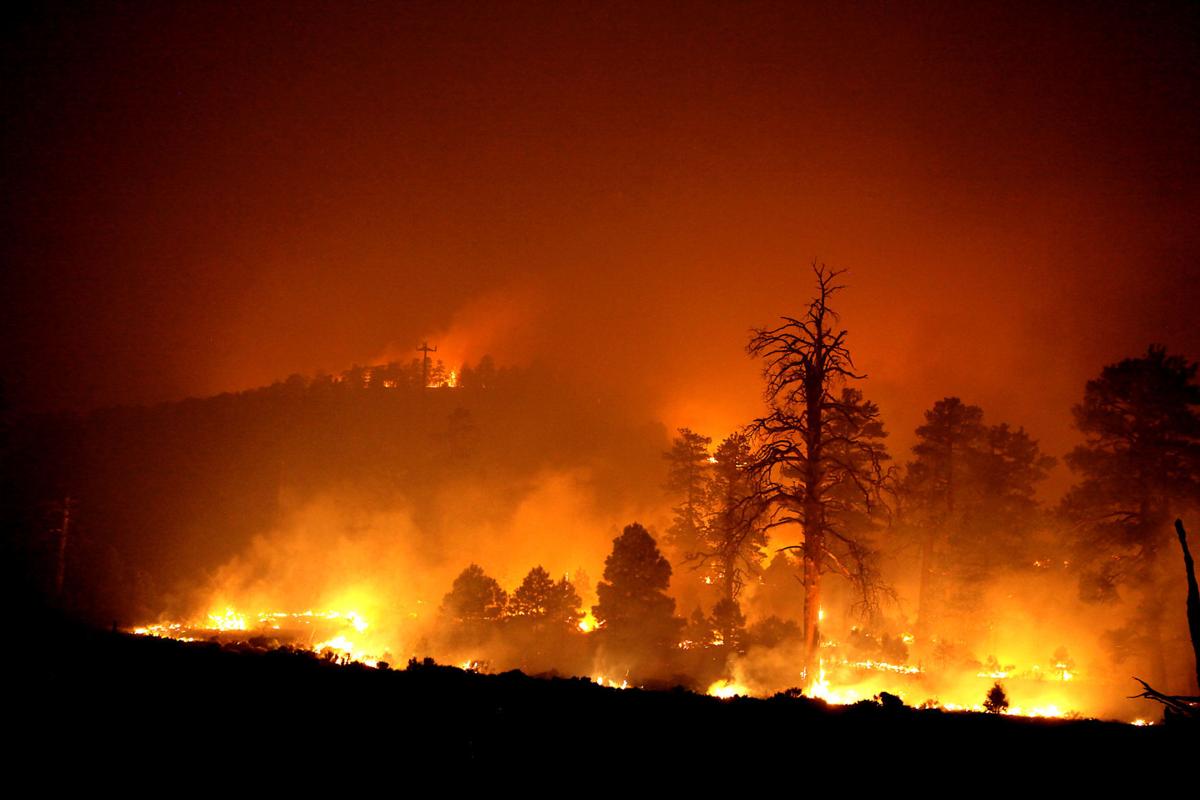 The night sky is painted in shades of orange and red as fire burns at the northern end of the Schultz Fire in 2010. 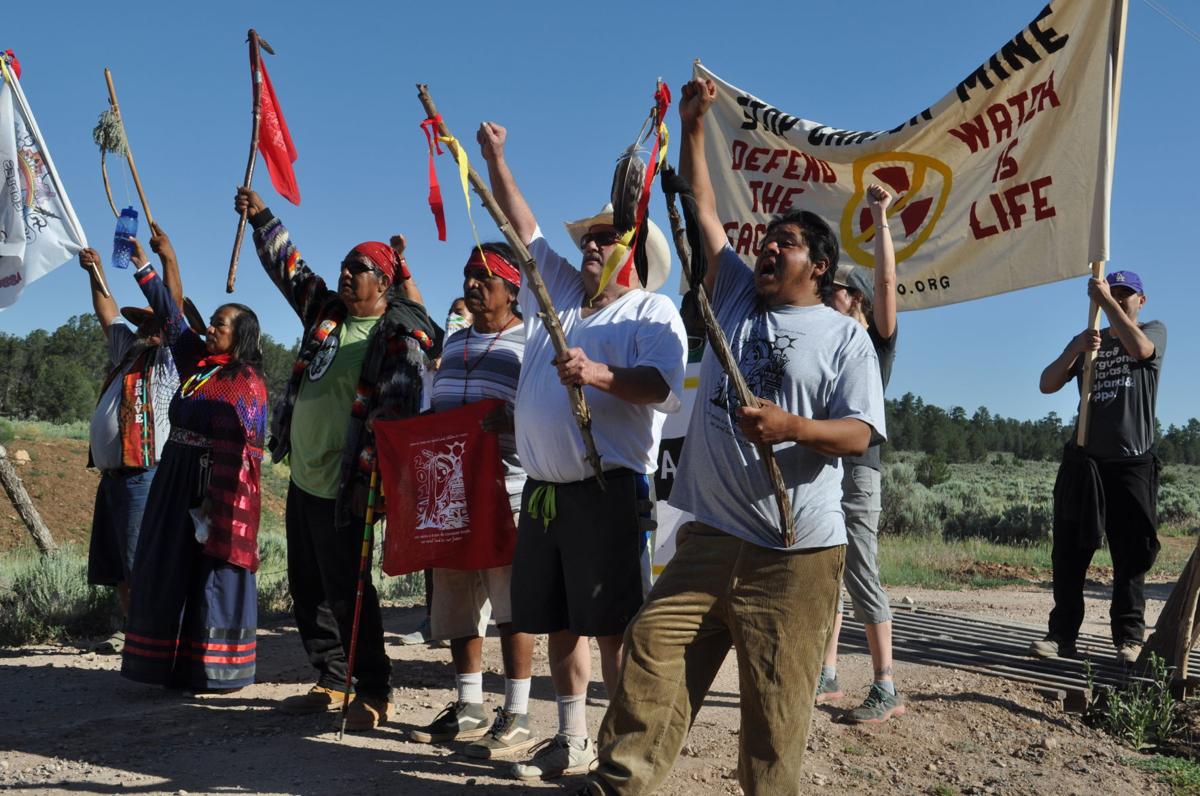 Members of the Havasupai Tribe stand with other opponents of uranium mining on the road to Canyon Uranium Mine during a protest march in 2017. 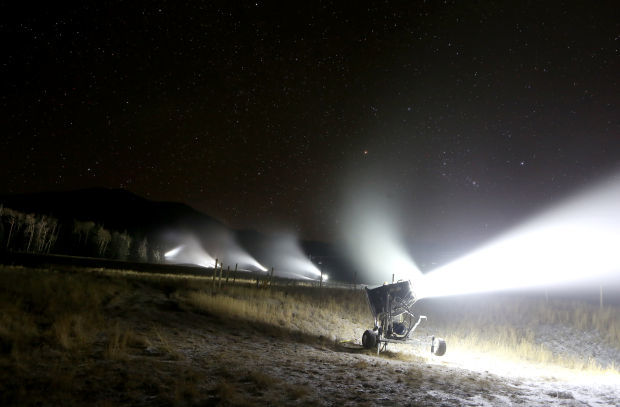 In this 2014 file photo, a string of snowguns shoot snow onto the Hart Prarie ski run at the Arizona Snowbowl.

Many different stories carried on for much of the decade, including the condition of forests around the area as well as the continued push for uranium minining.

This decade's wildfires, such as the Schultz Fire and Wallow Fire, have impacted the minds of land managers in northern Arizona in ways that will outlast this decade as forests continue to dry and the measured temperatures continue to rise.

While the 2010 Schultz Fire was small by today’s standards, 15,000 acres, it led to post-fire flooding that hit homes in Timberline, Fernwood and parts of Doney Park. The flooding also tragically caused the death of a 12-year-old girl.

During the 2019 Museum Fire, the only more-talked about fire was the Schultz Fire. The lessons learned from the loss of life, property and property value will continue in this county for some time.

The Wallow Fire was the largest in Arizona history to date in 2011. The Wallow Fire was a grim example of how bad fires can get in northern Arizona, burning 538,049 acres from the White Mountains near Alpine into western New Mexico.

While the Wallow is not on the tip of the tongue for politicians in Flagstaff, you can’t speak with fire experts in northern Arizona without hearing the echoes of the Wallow Fire’s devastation.

United Nations climate scientists released a report showing the planet has 10 years for the world to fight against its carbon emissions and warming climate.

Flagstaff City Council started a Climate Action Plan to frame ideas to reduce climate impacts in light of local, regional and international researchers showing the impacts on climate health. Ponderosa pine forests across the region are being ravaged by bark beetles and fire, scientists measure, as they project what a change in Flagstaff’s temperature will make it feel like — Prescott or Gallup, New Mexico.

Northern Arizona has a legacy of uranium mining that extends back into the past, through the present and into the future.

More than 700 dirty mines litter eastern Arizona on the Navajo Nation and continue to impact native peoples. This decade saw continued opposition to mines currently on the edge of the Grand Canyon National Park. Then-President Barrack Obama set up a moratorium against the uranium mines citing a lack of understanding their impacts, and current President Donald Trump has opened lines of communication to reconsider that moratorium.

The Havasupai Tribe on the reservation deep within the canyon warns that allowing the mines to continue could potentially poison their main water supply and the source of their tourism economy.

The highly controversial form of logging was suggested, but eventually rejected due to the impacts of dragging fallen logs through northern Arizona’s beloved-forests.

Despite that, logging has continued in other forms like ground-based and helicopter logging and mechanical logging around northern Arizona to reduce the region’s dry and overgrown forests. The Four Forests Restoration Initiative, the Flagstaff Watershed Protection Project, the Williams Restoration Project, and many other projects that have cropped up around the west show how bad the problem has gotten.

Forest industry still has not revitalized itself across the entirety of northern Arizona, but forestry experts are putting their hope in 4FRI’s next phase as a way to help find their way out of the woods.

Arizona Snowbowl is working on its new master plan that would shape the development on their 777-acre plot for the next 20 years.

Snowbowl has been using reclaimed wastewater for their snow since the City of Flagstaff signed a contract with the resort to create artificial snow. This decade saw the dismissal of the Hopi Tribe’s snowmaking case against the winter resort in the Arizona Supreme Court in 2018. The resort also had its the longest winter season in 2019.

The proposed Grand Canyon Escalade development got too close to being developed for the comfort of many.

The proposal to a Phoenix developer to create a gondola, hotel, and skywalk above the Little Colorado River failed to surpass Navajo Nation approval. The confluence where the Colorado River and Little Colorado River meet has been a historic meeting for over a century. Many feared the gondolas would monetize the beauty of a tribal sacred site for many tribes into a tourist attraction.

The nation stopped the proposal after a historic vote 2017.

At the end of the decade, the number of Mexican gray wolves in the wild reached a minimum of 131 wild wolves in 32 packs.

In 2017, a plan was created to recover the federally protected species and turn its management over to appropriate states and tribes after delisting it. Biologists and wildlife managers were divided on the plan, having different opinions on the strategy for reviving the species.

The decade saw the ruling by a federal judge suggesting the management rule for the wolves needed to be revised, conservation groups hoped that would mean the boundary and population would be modified.

When the dam was decommissioned, no one expected Fossil Creek to be loved to death.

The steep increase in visitation that came after word of mouth, Instagram and media coverage. At peak visitation, the wild and scenic river saw 86,333 people in 2015. The Coconino National Forest then implemented a permit system in order to better control the huge increase in visitors.

Now in 2018, 14,602 permits were reserved and 34,444 permitted people went to the creek. More information about the comments and management plan is expected to be released in 2020.

Around the region, the people’s use of public places is increasing causing national parks and recreation managers to reconsider how to permit the public to use land owned by the government.

Between 1992 and 2014, the Grand Canyon National Park’s visitation stayed between 4 and 4.7 million visitors. But between 2015 and 2018 park visitation increased to 6.3 million. Since 2013, Glen Canyon Dam has increased from 1.9 to 4.2 million visitors. Other parts of northern Arizona like Sedona and Fossil Creek are also symptoms of increased visitation that is cited back to social media, news reports and word of mouth.

As we enter the 2020s today, here's a collection of all of our stories looking back at the 2010s, from education to weather, from the city to …

Among other expansions, a variety of new schools and programs shaped Flagstaff's K-12 education during the past decade, providing more options…

As the second largest county in the contiguous United States by area, a lot is bound to happen within Coconino County every year. Here are jus…

A master's student at NAU is studying how to save two species threatened by the side effects of changing habitat: a bird of prey called the Am…

The Kaibab National Forest announced on Friday it will begin marking trees in early March within the 1,400-acre Government Prairie Project nor…

Northern Arizona University is growing 1,000 trees that Arizona State University plans to use as a forest on their Phoenix campus to offset ca…

The night sky is painted in shades of orange and red as fire burns at the northern end of the Schultz Fire in 2010.

Members of the Havasupai Tribe stand with other opponents of uranium mining on the road to Canyon Uranium Mine during a protest march in 2017.

In this 2014 file photo, a string of snowguns shoot snow onto the Hart Prarie ski run at the Arizona Snowbowl.