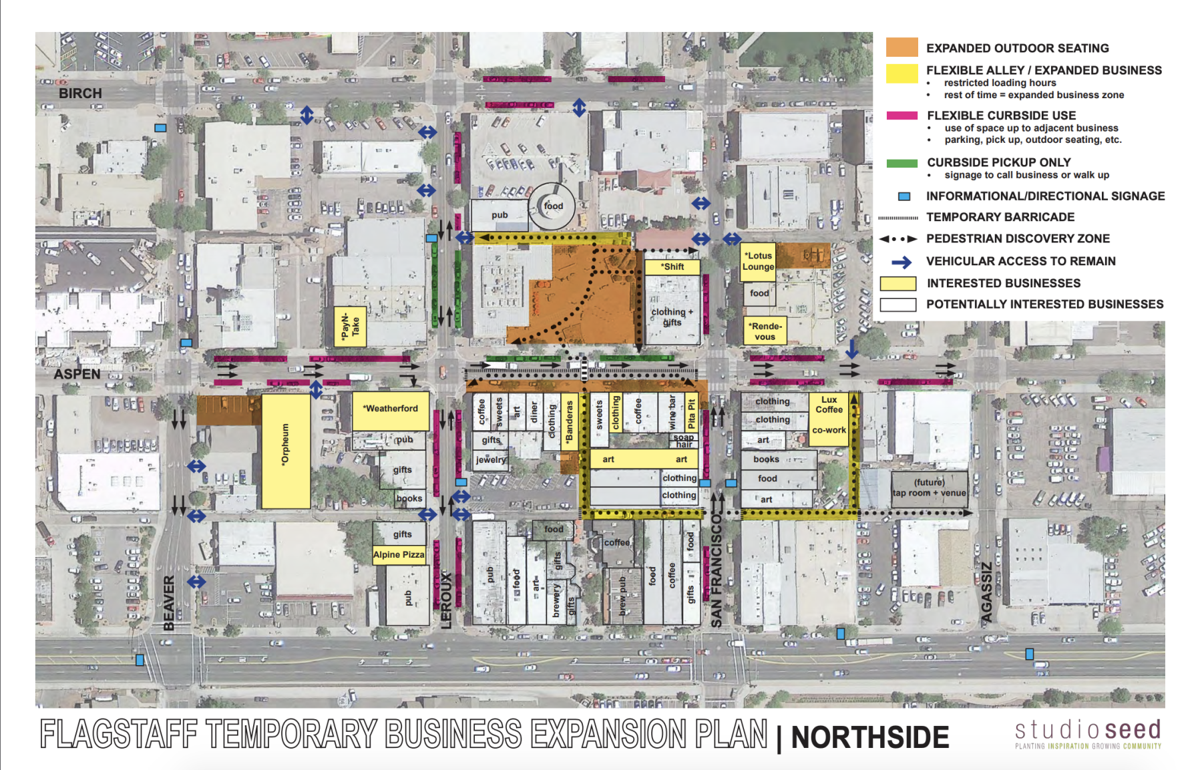 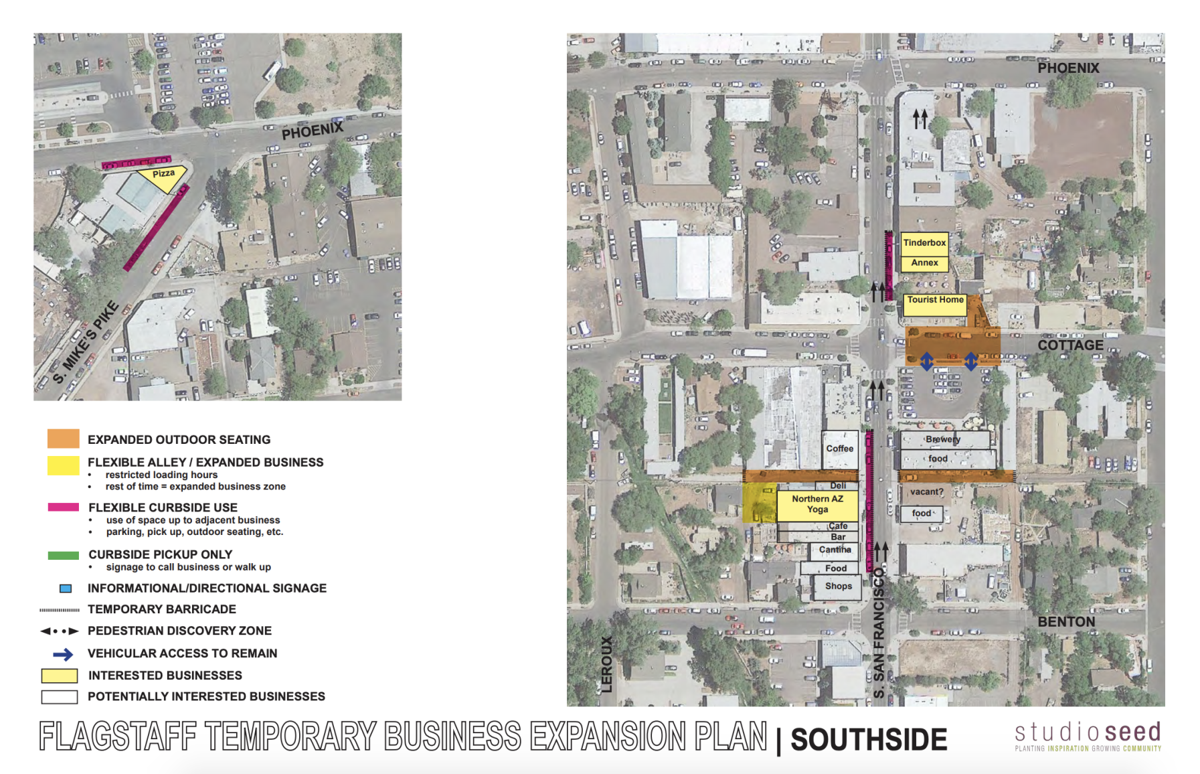 After Flagstaff City Council gave its thumbs up to the idea last month, city staff and the Downtown Business Alliance are creating a plan to close lanes and give businesses more control over their adjacent public space.

“I think our businesses need our help now more than ever before,” said DBA director Terry Madeksza. And providing more outdoor space for businesses to use while allowing for social distancing could be a step in that direction.

Per the plan, businesses across the downtown and in parts of Southside would be able to decide on an individual basis how to use the street-side parking adjacent to their business, Cheney Bostic told the council last week.

The business could then decide on its own whether to use that space as an area for outdoor seating, to show products on tables, do curbside pick-up or keep the more traditional street-side parking.

Bostic, with the Colorado-based company Studio Seed Urban Design and Planning, has been working with the DBA to create the plan. She said if they move quickly, they could be putting up barricades, large planters and tables as soon as next week.

So far, Madeksza said they have spoken with about a dozen businesses that are interested in participating and expect that number to expand.

Within the plan, some lanes would also be closed for use by businesses and tables would be set up in Heritage Square.

On Aspen Avenue, from Leroux to San Francisco, the street would be reduced to just one lane. Barricades would separate the northern lane, which vehicles could still use, from the closed southern lane, Bostic said. Several alleyways could also be used as additional spaces for commercial use while also accommodating deliveries for businesses.

“This is about being practical, certainly, but it’s also about survival,” Bostic said. “Rules are changing daily and so are individual feelings about safety. Meanwhile, businesses are struggling to stay open and jobs have been lost at record rates. This plan is about economic survival and public health.”

Like many restaurants downtown, Il Rosso isn’t allowing any indoor service and Verderame said that likely wouldn’t change if the city provides more outdoor space. But he said more outdoor seating would give customers and tourists the opportunity to pick up their food and eat it nearby, rather than at home or a hotel.

“If I could set up tables outside, I would still only continue to-go. The thing is, customers would have a comfortable space to eat right outside the restaurant,” Verderame said. “I think it would help a lot.”

Still, he said additional outdoor seating could pose challenges as well. Since many restaurants are only offering takeout, Verderame said public trash cans downtown already fill up fast -- and by the end of the day, many are overflowing. While Verderame suggested that problem should be easy for the city to fix, opening up more downtown space for eating could make it worse.

City Risk Manager Dean Coughenour also told the council the city will need to make sure if customers and vehicles are sharing street space, it is done in a safe fashion.

“Any time we put motorized vehicular immediately adjacent to the public, there is an absolute concern that there may be an impaired driver that would potentially careen into a number of our citizens,” Coughenour said.

Still, the council supported moving forward with the plan.

“I don’t know what we can do to do something like this for the east side, but I just think that Fourth Street and other parts of town could very highly benefit from [these efforts],” said Vice Mayor Adam Shimoni.

Hobby Lobby has recently confirmed that it will be opening its new location in the Flagstaff Mall in late August.

Personal pandemic rituals — yeah, we’ve all got them — can range from the self-indulgent to the selflessly altruistic. Whatever gets you throu…

Mark Gooch, the airman charged with first-degree murder for the kidnapping and killing of Sasha Krause, could be placed on bail at a hearing n…