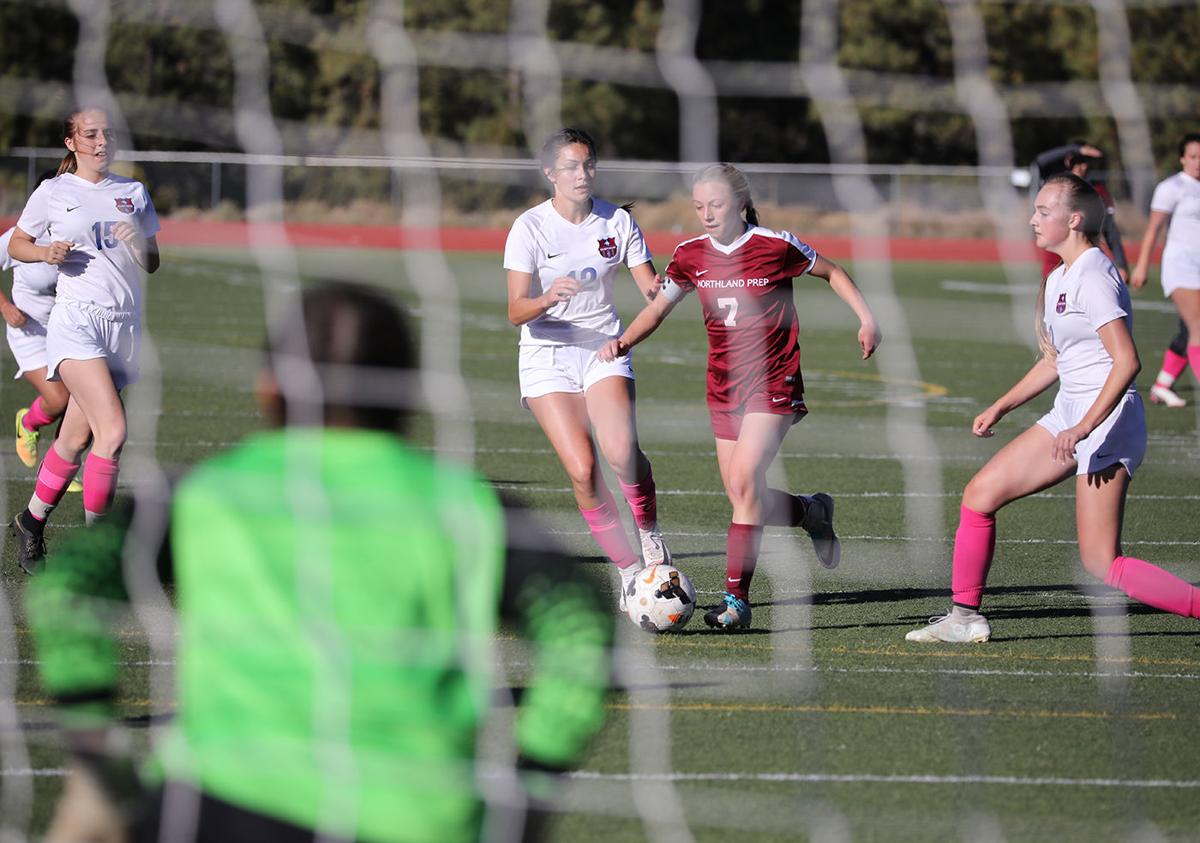 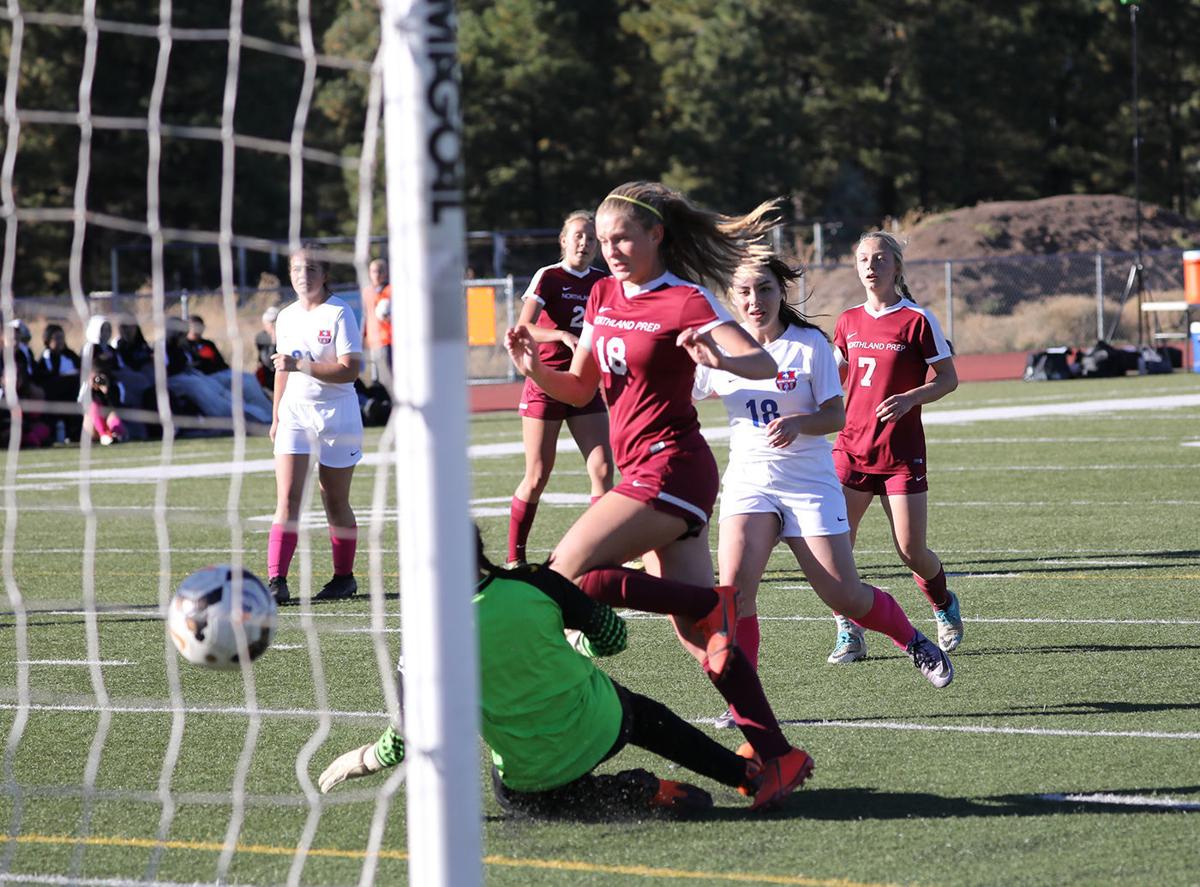 Northland Prep's Ellie Karren (18) overpowers the goalkeeper as she takes a shot on goal Tuesday afternoon during a match against Camp Verde at Sinagua Middle School. 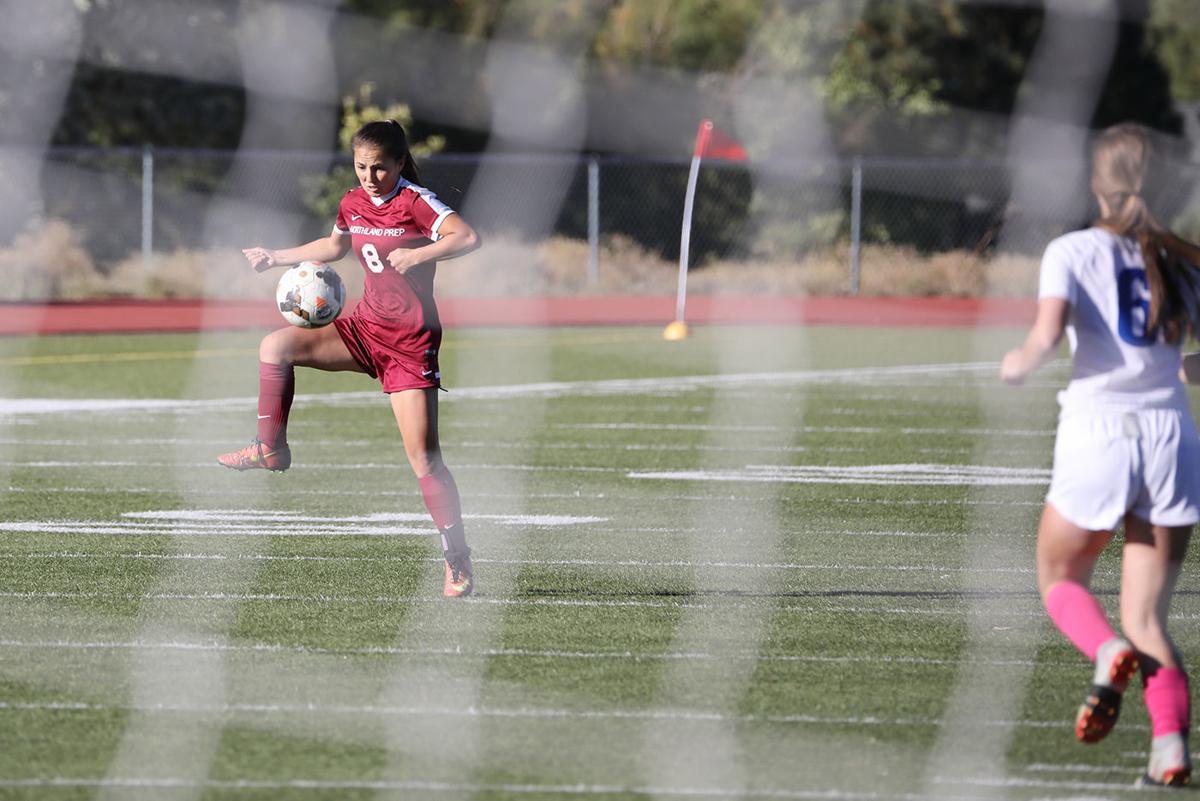 As powerful and quick-hitting as the No. 1 Northland Prep girls soccer team's offense is, the defense has shown more than its worth this season.

The 2A Conference Spartans cruised to their sixth shutout win of the regular season with an 8-0 mercy-rule victory over No. 8 Camp Verde, 8-0, Tuesday at Sinagua Middle School during a windy and blustery day.

Northland Prep, now 7-0 overall and 2-0 in the Central Region, needs just one more shutout to match last season's mark of seven -- with five games still to go until the 2A state playoffs start.

The only team to score on the Spartans' defense in the regular season so far is the No. 2-ranked Chino Valley Cougars -- the Spartans' familiar rival who they have faced in the past two state title games.

A major part of the defense's dominance this season, co-head coaches Michael Blair and Keith Hovis said following the win Tuesday, is the play of goalkeeper Payten Schmidt for the reining champs.

The junior rejected three shots on goal against Camp Verde en route to her sixth shutout of the season, counting non-power-point matches. She allowed the three goals to Chino, but that didn't worry the Spartans' coaches.

"She's stepped up. And I would say with the Chino game, we always get nervous," Hovis said. "It was there and it was wet. I give credit to them, they are legit. Two (of the goals) were high and chipped up to where she misjudged them. But it is what it is."

Last season, Schmidt allowed 11 goals on 90 shots on goal -- an .877 save percentage, nearly matching her mark so far this season.

Beyond her ability to stifle incoming shots, Schmidt gives confidence to the rest of the Spartans backline, allowing midfielders and defenders to play a bit more aggressive.

"She's really being a leader in the back, controlling the field and talking and communicating with the defense," Blair said. "She's been doing that well and that's been the difference. She gives the defense confidence to play back to her and use the whole field. ... That let's us use our speed."

The speed was definitely there against Camp Verde.

Most of Northland Prep's eight goals came off quick breakaways. Sydney Sventek led the way with a hat trick -- scoring all three goals in the final seven minutes of the first half to help push the Spartans to a 7-0 halftime lead.

Ellie Karren and Mia Blair each put two in the back of the net while Hannah Petrucci added one. Five different Spartans had assists, with Sventek leading the way with four. Mia Blair, Jordan Blair, Alyssa Sturm and Petrucci each had an assist, much to the enjoyment of Michael Blair, who said he wants to see the team pass the ball around and other players step up.

Mia Blair and Karren continue to pace the way in the 2A with goals scored, sitting at second and first with 29 and 31 respectively. Sventek leads the conference with 25 assists and Mia Blair is right behind her in second with 22.

Mia Blair capped off the win over Camp Verde with a 20-yard bending shot that cut through the wind and bounced off Camp Verde's goalkeeper for the 8-0 lead with about 23 minutes left on the clock, just three minutes until the mercy rule.

There’s a lit fireplace in the corner, but its crackle cannot be heard over the buoyant patter of friendly conversation. At the door, a man we…

The definition of a caregiver: A skilled helping hand in moments of need for daily living – for the elderly, for the sick, for the disabled.

Northland Prep's Ellie Karren (18) overpowers the goalkeeper as she takes a shot on goal Tuesday afternoon during a match against Camp Verde at Sinagua Middle School.