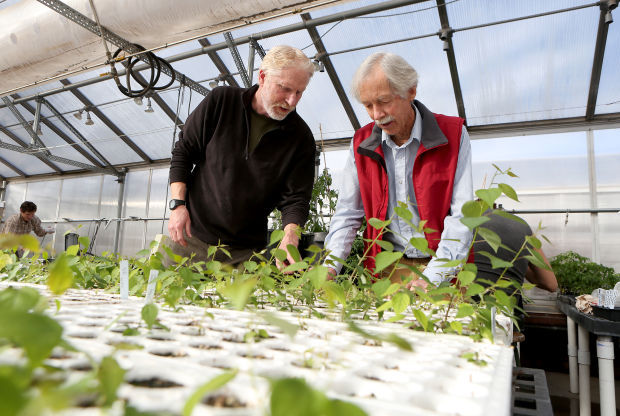 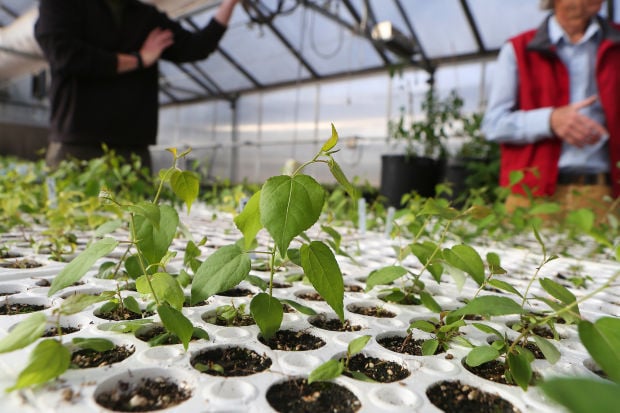 Ralph Baierlein stood over hundreds of aspen saplings, softly touching the leaves of the tiny plants.

“It's good leaves like this that really warm my heart,” Baierlein said as giant fans at Northern Arizona University’s research greenhouse complex hummed in the background.

As project coordinator for Friends of Northern Arizona Forests, Baierlein is leading one slice of the nonprofit’s work to regenerate and protect aspen in the forests around Flagstaff.

The project, which is the group’s only experimental initiative, hopes to find and propagate aspen that, due to high concentrations of natural chemicals, aren’t as tasty to elk and deer. It’s a new approach to stemming a massive dieoff in aspen that threatens to draw down the diversity of local forests, impacting wildlife, their habitat and, of course, classic fall-season views.

After four year,s though, the project has yet to deliver any promising results. Baierlein stresses that the experiment is still underway and must be continued, but Mike Elson, district ranger with Flagstaff Ranger District, said he's becoming doubtful that it will be the silver bullet many might have hoped.

Even so, the experiment will contribute to an area where information is sparse and could provide a jumping off point for future research about aspen adaptability to climate change, those involved in the project said.

Pummeled on all sides

Aspen, like the other trees in northern Arizona’s forests, have been battered by drought, pests and disease. According to a Forest Service paper, between 2000 and 2007 mature stands of aspen below 7,500 feet experienced a 95 percent mortality rate. Near Hart Prairie the number was 60 percent and above 8,500 feet it was 15 percent.

Baierlein has a pocket notebook where he keeps a typed list of the events that have hit aspen the hardest. A leaf-killing frost in 1999, extreme drought in 2002 and 2003 and then a “lethal follow-up” of fungi, bark beetles and poplar borers. Meanwhile, decades of fire suppression gave a chance for conifer trees to crowd out aspen habitat while depriving the deciduous trees of the flames that spur regeneration.

If that wasn’t enough, populations of deer and Rocky Mountain elk ravenously munch tender young trees that spring up from the aspen root system. The nonnative elk were brought to the area in the 1920s and have flourished. Local Forest Service officials started putting up fencing around aspen stands in the 1980s, when the area’s elk herd peaked in size, said Andy Stevenson, silviculturist for the Coconino National Forest. But fencing is expensive and time-consuming to maintain, Baierlein said.

So, he said, FoNAF began asking, “Is there another route?”

The nonprofit’s experiment aims to seek out aspen that are passed over by elk and deer due to higher levels of natural chemical defenses. Young saplings are propagated from root segments of those poor-tasting trees and then replanted to see if they turn away elk and deer as well.

FoNAF first collected roots of aspen in 2011 and two years later planted a batch of 380 on Hart Prairie. But just days after protective cones were removed from trees outside of protective fencing, the vast majority of them had been eaten down to sticks. Another 330 saplings were planted in 2014 but they are still protected by cones and mesh sleeves. Their browsing resistance will be put to the test next summer.

Hundreds more aspen saplings in various stages of growth crowd tables and floor space at the NAU greenhouses. The plan is to plant many of those trees this summer and then plant 700 to 1,000 more 2016.

Though “nothing is definitive or comprehensive yet,” at the very least the experiment will propagate more aspen in areas where they have been lacking for years, Baierlein wrote in a recent year-end report.

FoNAF’s search for browse-resistant trees is venturing into an area of aspen research — chemical ecology — where information is sparse, said Paul Rogers, director of the Utah-based Western Aspen Alliance.

“The best knowledge we have is that there is a threshold,” Rogers said. “Stuff will taste bad, but if (the animals are) starving they'll eat anything.”

Past research trials on this subject have only been done in controlled environments, which doesn’t help researchers to draw any real-life conclusions, he said.

Aspen in a changing climate

When it comes to the future of aspen in a warming Southwest, there are two threads of thought, Rogers said. One camp predicts that warmer temperatures due to climate change will cause available aspen habitat to shrink. Another expects that more warming and drying will cause more frequent fires, which spur aspen regeneration.

The reality is probably somewhere in the middle, Rogers said.

Even if the browse-resistant experiment doesn’t work out, the aspen that have survived in fenced areas of the experimental plots can be used to study trees that are better adapted to warmer, dryer temperatures, said Phil Patterson, manager of the NAU research greenhouse complex.

The trees have been collected from about six different locations with different climates, elevations and soil types. Tagging will allow FoNAF or others to track whether saplings from trees growing at lower and warmer elevations survive around 8,000 feet. If they do, further projects could focus on the potential for those transplanted aspen to have an adaptive advantage as temperatures continue to rise.

The Friends of Northern Arizona Forests' browse-resistant aspen experiment isn't the only effort to regenerate the trees. The nonprofit also helps maintain fences around 250 acres of younger aspen stands and replants young trees in burn areas.

Aspen regeneration work is also happening on the Kaibab National Forest. Since 2007, forest crews on the Williams Ranger District have fenced in 126 acres of aspen and will plant 15 acres of new aspen saplings later this year. The strategy of managing, rather than suppressing, naturally caused fires also helps promote aspen regeneration on the forest, said Jackie Banks, Forest Service spokeswoman.

More help for aspen.  A4