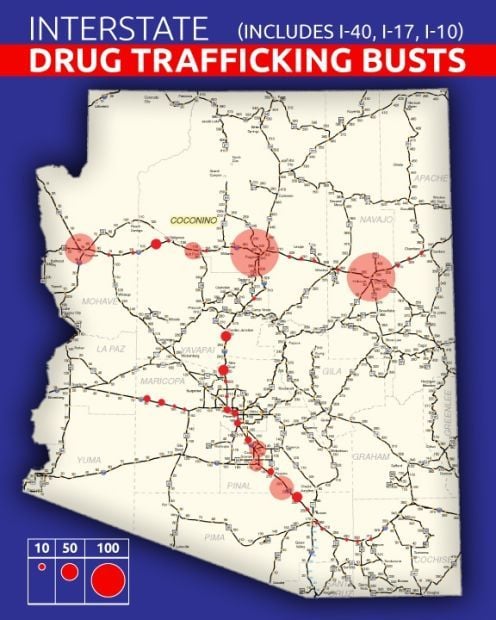 This infographic shows interstate drug trafficking arrests for the state's three major arteries, but does not include busts on other roads and within the Phoenix metropolitan area. 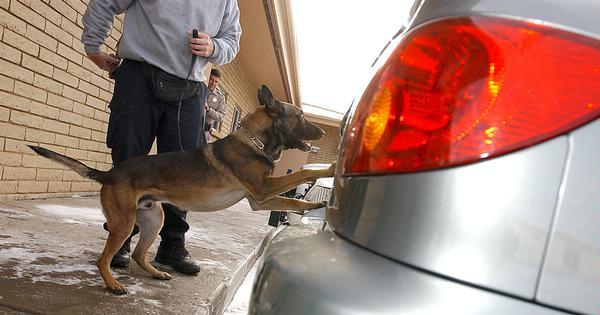 Jake Bacon/Arizona Daily SunA drug sniffing dog in training sniffs the trunk of the Toyota after officers placed the open bales of drugs back into the trunk as a training exercise.To order this photo, go to http://photos.azdailysun.com
By ERIC BETZ Sun Staff Reporter

The U.S. Drug Enforcement Agency was monitoring a drug trafficking operation in Phoenix in 2005 when a GPS unit placed on an Acura sedan alerted them that the vehicle had left the Valley. Investigators knew it was on a drug run to Chicago.

The feds asked the Arizona Highway Patrol to stop the car outside Flagstaff on Interstate 40 near Cosnino Road. The officer said the Acura traveled six inches over the white line. In the trunk was 30 pounds of marijuana.

The Department of Public Safety report made no mention of the DEA or its stop request. That revelation came years later in federal documents.

The tactic is called a “whisper stop,” or “walled-off stop,” and it has become a common tool in the war on drugs. In order to protect a larger investigation, federal drug agents will ask the highway patrol to make a stop look like a random traffic violation. If possible, the driver is turned against the drug organization, sometimes on the side of the road.

The Arizona Highway Patrol made some 1,500 drug trafficking arrests last year, and 117 of those happened exactly at milepost 200 on Interstate 40 — just outside of Flagstaff. It’s by far the highest number of stops at any single location in the state. Not all of those are whisper stops. And often the information flows the other way. In random drug finds, DPS officers will feed information back to the feds.

From 2006 to 2008, the Coconino County Attorney’s Office says it prosecuted 198 such cases of federally initiated interstate drug trafficking. The total price tag for prosecution alone: $850,000.

And for several years, the Department of Justice was willing to repay Coconino County for doing its work. Now, they are asking for the money back.

The county received more than a million dollars in nine payments through a U.S. Justice Department program called the Southwest Border Prosecution Initiative. Then, in 2011, Justice had the payments audited. The auditor told the county that there was no evidence of federal involvement in any of the cases.

And while the highway patrol notifies federal agents each time they happen on a drug bust, that wasn’t enough for the auditor. Also, because a “substantial number” of the cases started as whisper stops, no written evidence existed.

“It’s a method we use to make successful arrests not just on one traffic stop, but a whole ring of drug dealing that goes far beyond borders,” Arizona Department of Public Safety spokesperson Bart Graves said of whisper stops. However, he declined to go into specifics of how the stops are conducted or how often, citing the sensitive nature of the subject. “We’ve never discussed it in public,” he said.

It’s that secrecy that the OJP used to call the county’s reimbursements into question.

“Because of their nature, walled-off stops often do not include written information,” said Chief Deputy Coconino County Attorney Mike Lessler. “It’s sensitive intelligence information that flows between federal and state and local law enforcement agencies, and if they were to put that information in writing, it could compromise their intelligence.”

Eventually, the federal government demanded its money back and for more than a year the county has been fighting to keep those funds.

The county has enlisted the support of the DEA, the U.S. Attorney’s Office, and high-powered members of Congress. U.S. Senators Jeff Flake and John McCain, as well as U.S. Reps. Ann Kirkpatrick and Paul Gosar, sent a joint letter on behalf of Coconino County with a set of pointed questions about the audit.

The grant rules listed on the application are broad, saying that the case simply must be federally initiated. To meet that definition, the case must result from a “criminal investigation or an arrest involving federal law enforcement authorities for a potential violation of federal criminal law.”

Other counties, including nearby Navajo and Mohave, receive funds under initiatives for the Arizona HIDTA, or High Intensity Drug Trafficking Area, which also exists in many counties across the country. Coconino County had not previously been reimbursed for the costs of federally initiated cases because it is not designated as a HIDTA. Its only route to reimbursement was the SWBPI grants.

John Leonardo, U.S. Attorney for the District of Arizona, told auditors that even though the county does not have HIDTA designation, there is still a very close working relationship between the federal and local agencies.

“Each drug arrest made by Arizona DPS in Coconino County is coordinated with the DEA agents in northern Arizona,” Leonardo wrote in a letter on the county’s behalf. “As there are only two DEA agents assigned to cover all of northern Arizona, it is not feasible for these agents to initiate each of these cases resulting from a traffic stop and drug seizure.”

Leonardo also testified to the necessity of walled-off stops in stopping drug shipments from reaching their destinations.

“In these instances, DPS acts to stop a vehicle believed to be transporting drugs, but does so based upon an independent legitimate traffic violation and thereafter develops sufficient reasonable suspicion to run a drug dog around the vehicle to determine the presence of drugs. As the name implies, these stops are walled-off from the ongoing investigation.”

The DEA even testified to its involvement in the trafficking stops.

At the county’s request, northern Arizona DEA agents ran the 200 audited cases through their database and returned with 55 that directly involved federal investigators.

“That involvement may represent leads that were passed on to other jurisdictions, known intelligence to DEA regarding continuing criminal activity that became actionable, and or search warrants and arrests that were made from the initial investigation that was started in Coconino County,” now-retired DEA Special Agent Jim Molesa wrote in documents made available to the Daily Sun.

Molesa said the relationship was “invaluable” between the DEA, DPS and the Coconino County Attorney’s Office. The information supports the DEA’s worldwide mission, he said.

In a response to the audit, Coconino County Attorney David Rozema pointed out that there were not enough DEA agents in northern Arizona to handle the volume of shipments being nabbed off the interstates. He said that in many cases, his office didn’t offer the suspects up for the feds to prosecute because they knew the answer in advance. The funding level for northern Arizona DEA is “woefully inadequate,” he said.

The county attorney’s office said it was being punished over a technicality. They also highlighted the tardiness of the challenge and pointed out that if the federal government had a problem with paying for interstate drug trafficking stops, they should have said so somewhere in the nine payments that were made.

“This office has already expended substantial resources prosecuting crime that is federal in nature, scope and impact, and this would inflict serious financial harm upon a rural county that can ill afford it,” Rozema wrote. “The unfairness of the federal government’s action cannot be overstated.”

Despite their efforts and the support, the auditor’s office was not responsive.

In a meeting in Washington, D.C., county officials met with a group of high-ranking representatives from the Office of Justice Programs, which administers the funds. The bureaucrats said that while their agency also agreed that the county should keep the reimbursements, the auditors did not.

The Office of Justice Programs eventually placed a high-risk designation on Coconino County, preventing it from for getting future grant programs.

“The county is between a rock and a hard place,” said Coconino County Supervisor Liz Archuleta. “We basically have what is a huge hammer over our heads and the hammer is that unless we settle, we are at risk for not receiving any future federal funding.”

That designation is already costing Coconino County money. The Office of Justice Programs is holding back an approved $600,000 grant to reduce recidivism in inmates at county jail.

So, at a recent Board of Supervisors meeting, the county agreed to offer OJP a settlement of $700,000. That amount represents the cash demanded by the auditors, minus 21 cases in which Coconino County says it can find written evidence of direct involvement with the DEA. It’s not clear if the feds will accept the settlement.

The settlement money comes out of the general fund, but it is enough to pay for seven county prosecutors, plus benefits, or eight Sheriff’s deputies, according to examples provided by county officials.

“A large percentage of our budget is federal funding,” Archuleta said. “We only collect $7 million in property taxes. We are dependent on federal funds and that’s one of the reasons we can’t risk alienating the federal government. We’ll pay this just to get out from underneath it, but were going to be asking our members of Congress to help us get it back.”

In the meantime, the County Attorney’s Office will continue what it sees as federally-initiated drug trafficking cases. Officials say they have no choice but to address the tons of drugs passing through to destinations east.

The Algerian making his own instruments

World's largest cruise ship to hit the seas in 2022

World's largest cruise ship to hit the seas in 2022

Ever wonder how sinkholes are formed?

Ever wonder how sinkholes are formed?

This infographic shows interstate drug trafficking arrests for the state's three major arteries, but does not include busts on other roads and within the Phoenix metropolitan area.

Jake Bacon/Arizona Daily SunA drug sniffing dog in training sniffs the trunk of the Toyota after officers placed the open bales of drugs back into the trunk as a training exercise.To order this photo, go to http://photos.azdailysun.com
© Copyright 2021 Arizona Daily Sun, 1751 S. Thompson Flagstaff, AZ | Terms of Use | Privacy Policy
Powered by BLOX Content Management System from TownNews.com.
You don't have any notifications.