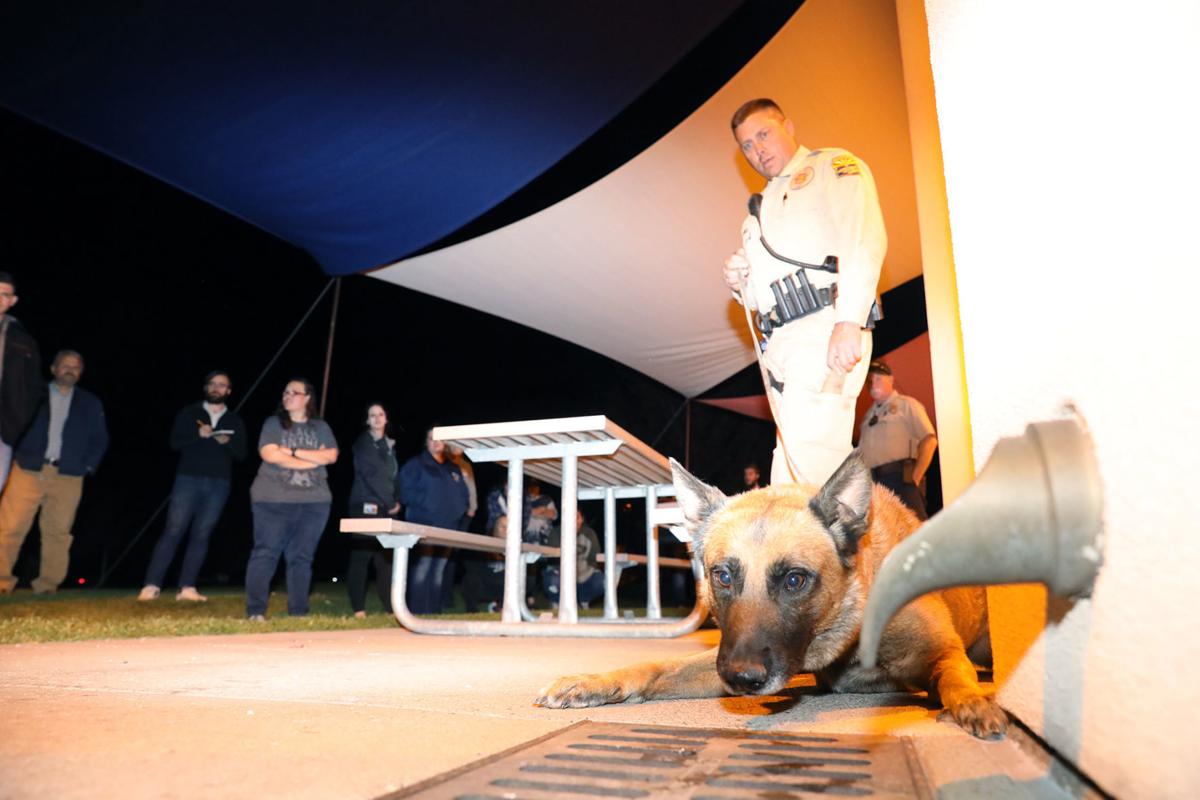 Arizona Department of Public Safety trooper Matt Bratz watches as his drug interdiction dog Chris alerts to the scent of drugs during a demonstration at a recent Citizen’s Academy class. 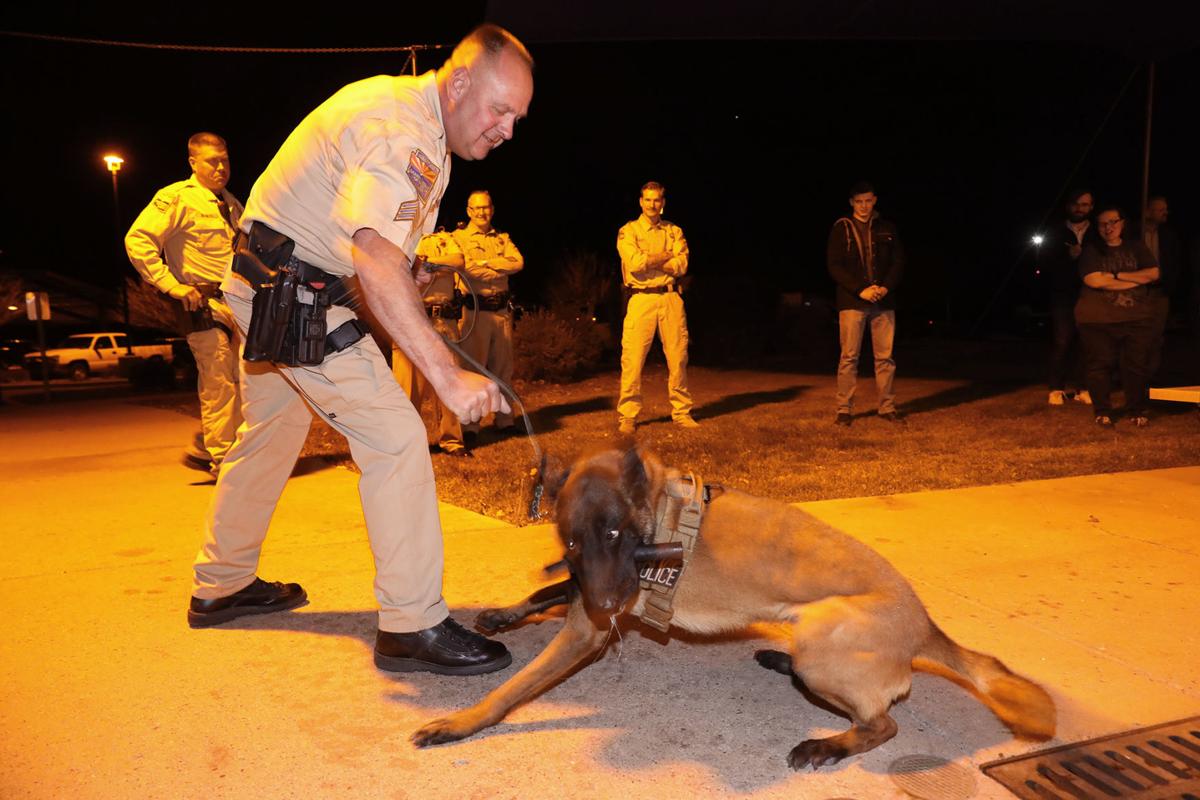 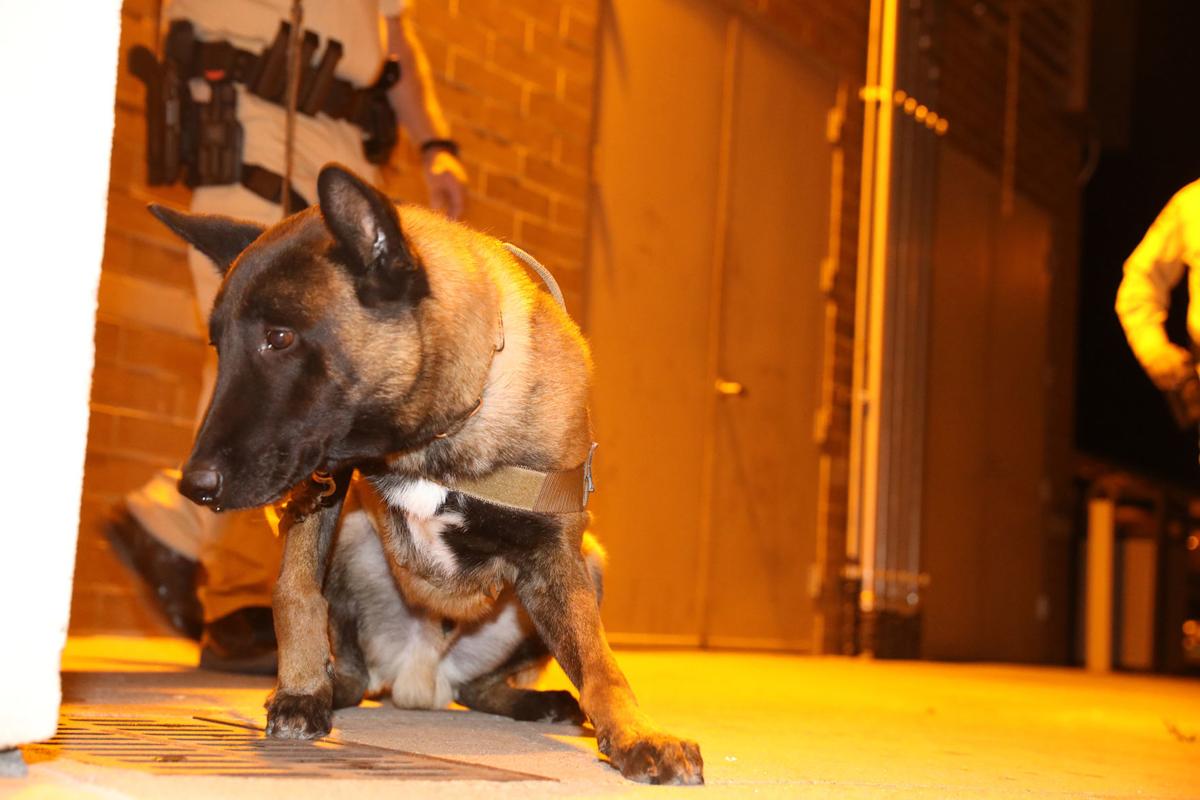 Enzo a drug interdiction dog with the Arizona Department of Public Safety gives a psaaive alert to the scent of drugs during a demonstration last week at a Citizens Academy presentation.

Chris knew drugs were hidden beneath the sewer grating. He could smell them.

He stopped on his feet and dropped to the ground, staring at the source of the smell. Just another cold night on the job.

It is Chris’s sensitive nose that makes him so well suited for his job as a trooper with the Arizona Department of Public Safety. Well, that and the fact that Chris is also a dog.

Chris and Enzo are two Belgian Malinois canines that work the Arizona Department of Public Safety’s canine district. Each dog is paired with one human partner throughout their career. Chris is partnered with trooper Matt Bratz while Enzo’s partner is sergeant Jay Hutton.

The four troopers taught a lesson on how their canine unit operates in northern Arizona at the Citizen’s Academy classes at the Flagstaff police and sheriff station last month. Anyone can enroll in the academy every spring and fall to learn about local law enforcement tactics and policies when approaching things as various as search and rescue to canine units.

When the troopers showing off the dog’s sniffing talents, there were key differences in the way the two approached the task. Both dogs found the scent with relative ease, but Enzo stopped his tail wagging and calmly stared at the target, while Chris got much closer to the source and couldn’t stop his tail from wagging.

Connecting one canine to one person helps the officer learn to read the dog.

“My dog’s tail comes up kind of like a scorpion. His hackles come up a bit. There’s other dogs that start breathing more intently,” Hutton said. “Just like people, they have personalities and different physical attributes to them.”

Having a dog for a co-worker on your 10-hour shift to some might seem like a blessing, but Hutton acknowledges that not all dog lovers are made for the job. Enzo and Chris may like to play, but at the end of the day, like their human partners, they also have a job to do.

DPS selects its canine candidates from a litter of dogs aged from 1 1/2 to 2 that were usually raised overseas in Europe and purchased from a trainer in California. When picking dogs, Hutton said they focus on finding dogs with a strong play and prey drive, meaning they need to always be eager to play and to hunt down prey.

Within DPS’s unit, canines are chosen early on for one of two options: searching for drugs or bombs.

If the canine was trained to work both narcotics and bombs, the dog could signal to their partner that a notable substance was in a bag and the partner would be left to figure out whether it was drugs or a bomb, Bratz said with a laugh.

And depending on their specialty, they could be used to sweep huge stadiums at sporting events, or be like Chris and Enzo and scour highways and countrysides in police vehicles.

Over those years, the dogs build up a record, which is very important to the canine unit’s continued success. Bratz explained that on Interstate 40, he generally sees large volumes of narcotics flowing from west to east and money flowing east to west. Having a dog with a clear record of success is important against a drug trafficker who has the money to hire an expensive attorney willing to undermine the dog’s credibility as a method of evidence gathering.

“We want the best dogs we can have, and we want the documentation to prove that,” Bratz said.

Bratz and Hutton both live with their partners; however, Hutton explained that he doesn’t treat Enzo like he does any other house pet. Enzo and Hutton work 10-hour shifts together and train four to eight hours per week. The department provides the money for the food, doghouse, grooming and medical care during their time on the force.

When the shift is over, Hutton puts Enzo in his doghouse or kennel for the night. Hutton said the effect of this is Enzo puts all of his energy into chasing a suspect or tracing a scent instead of saving energy if he expects to go on a hike or play with younger kids later when he gets off work.

"You see how excited they are to come to work. Every day when I start my Tahoe, he’s ready," Hutton said. "He’s ready. He’s excited. He knows he’s going to work. That’s exactly what you want in a work animal. They get their fulfillment from going to work and doing their job."

Flagstaff, undeniably, is a dog-loving town. It permeates the civic culture to such an extent that people don’t look askance at all to puppy y…

Between all the dog-friendly restaurants and stores, one thing is clear: residents of Flagstaff love their dogs. But now, there will be one de…

Arizona Department of Public Safety troopers stopped a drug smuggler on the eastbound Interstate 40 and seized 49 pounds of methamphetamine.

Arizona Department of Public Safety trooper Matt Bratz watches as his drug interdiction dog Chris alerts to the scent of drugs during a demonstration at a recent Citizen’s Academy class.

Enzo a drug interdiction dog with the Arizona Department of Public Safety gives a psaaive alert to the scent of drugs during a demonstration last week at a Citizens Academy presentation.