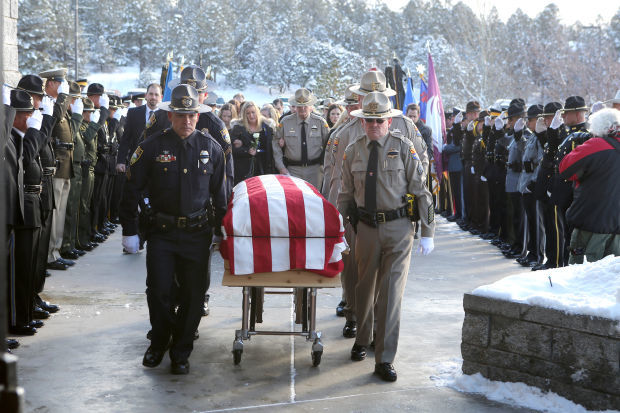 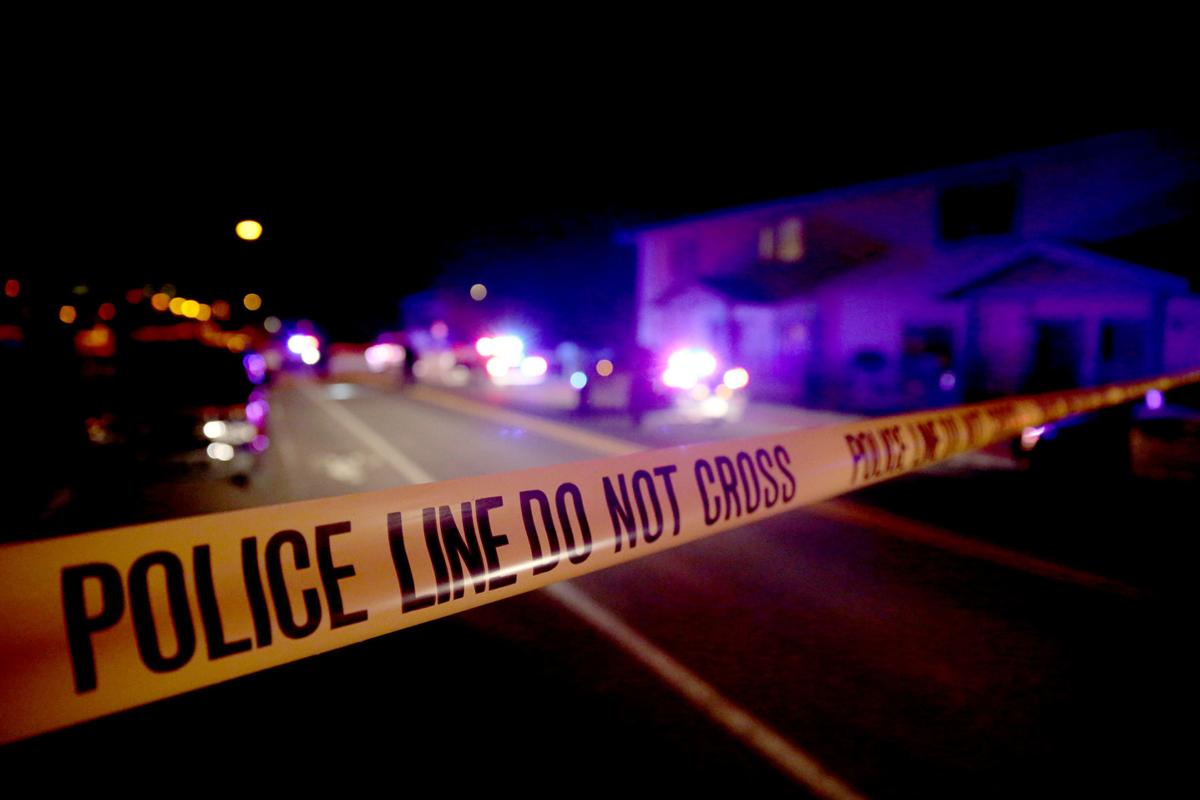 Police tape stretches across a section of East Franklin Avenue on the edge of the Northern Arizona University campus where Steven Jones, 18, is accused of shooting four fellow university students early on Oct. 9, 2015. Colin Brough, 20, died at the scene. 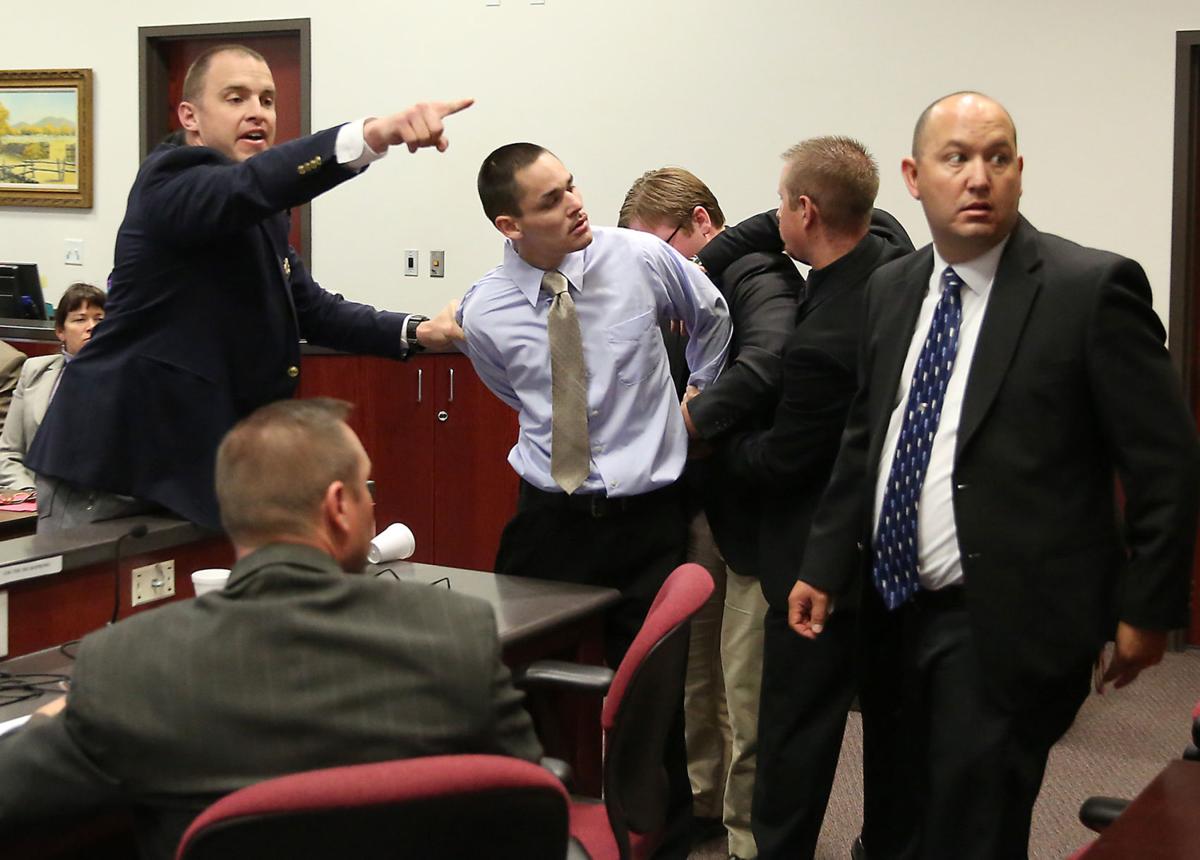 Michael "Buddy" Vallejos, 23, is wrestled into handcuffs by court bailiffs after reacting violently to hearing a guilty verdict in his trial for second-degree murder in the 2013 stabbing death of 23-year-old Juan Hernandez. Vallejos was also found guilty on a charge of assisting a criminal street gang and aggravated assault of another west-side gang member. Vallejos's reaction to the verdict and the reaction of his family members in the courtroom caused the Coconino County Superior Court to go into lockdown while his supporters were escorted from the courtroom and the building. 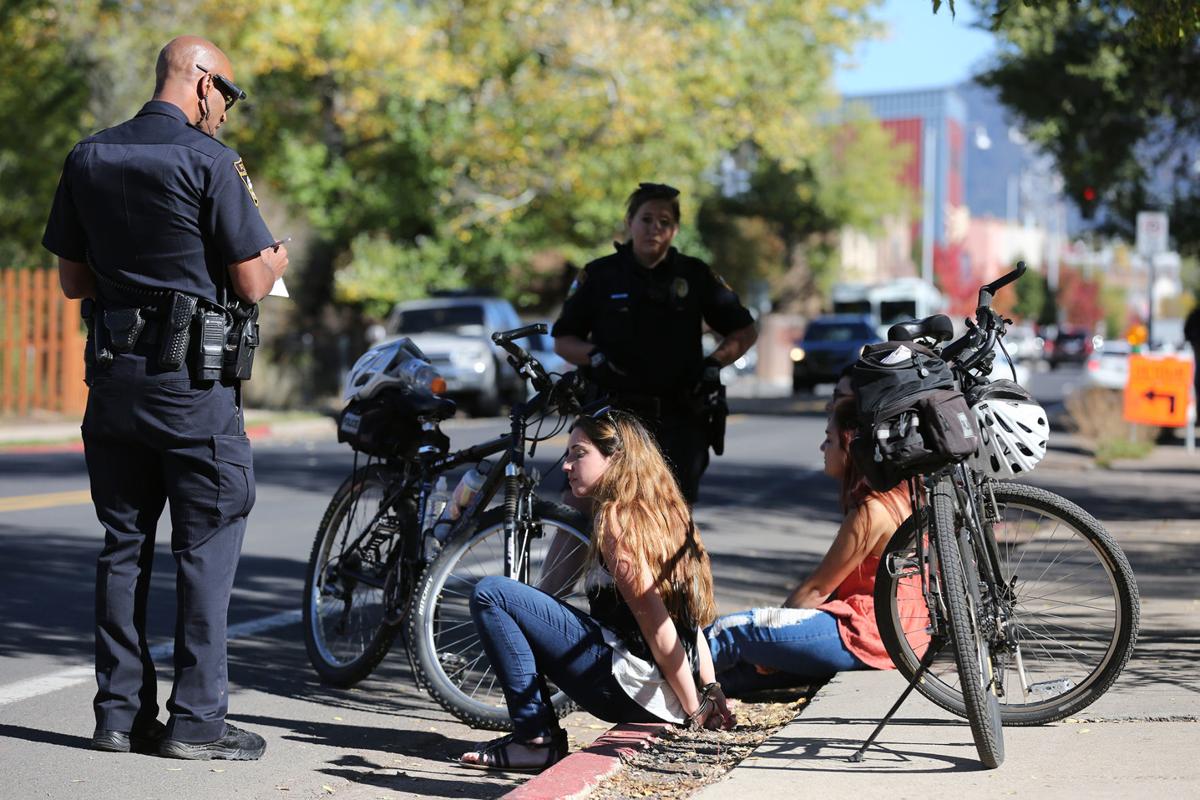 With the decade coming to a close, here's a look at the most important and impactful stories in Flagstaff since 2010.

The death of Tyler Stewart

The death of Flagstaff police officer Tyler Stewart had an immediate and lasting impact.

Beyond the significance a death of an officer can have on a community when they’re killed while responding to a domestic violence call, his death was the first officer fatality in the line of duty filmed on body camera.

Hundreds of citizens and law enforcement from around the state came to his memorial. Citizens placed blue lights on their porch to honor the sacrifices Stewart and officers make on a daily basis.

To this day, officers are shown the video of Stewart’s death around the country as an example of how the routine and deadly parts of an officer's job are intertwined. And a bust sits silently off of Butler Avenue reminding the community of Stewart’s sacrifice.

It is one of the few cases that has led to the death penalty. After being placed on death row, Bible was executed on June 30, 2011.

People who lived in Flagstaff at the time remember the names: Judge Richard Magnum, Camille Bibles (no relation), and the 9-year-old victim Jennifer Wilson. Many remember where they were when Wilson’s body was found tied up on Sheep’s Hill on the east side of Flagstaff.

“I believe this case changed Flagstaff forever. Richard Bible stole some of our innocence and charm. It shocked us as a community to the core,” said then-county attorney David Rozema.

In the immediate aftermath of the shooting in October 2015, as more details surfaced of what happened late that night, students on NAU’s campus described what had occurred not as a “school shooting” but a “shooting at a school.”

Regardless of its framing, NAU student Colin Brough was killed and NAU student Steven Jones pulled the trigger. Nick Piring, Kyle Zientek and Nick Prato were all shot and wear the scars to this day.

The question remains whether Jones will see jail time for second-degree murder or aggravated assault, or walk free on his self-defense claims in his upcoming trial, after a mistrial in 2017.

The 2013 gang murder of Juan Hernandez sparked two trials and a litany of differing verdicts.

The murder was the result of a fight between the Eastside and Westside rival gangs in Flagstaff’s Sunnyside neighborhood.

After a mistrial, Michael “Buddy” Vallejos was sentenced to 50 years in prison; Jeremiah Barlow pleaded guilty to manslaughter and was sentenced to 13.5 years; and Norberto “Beto” Ramos-Madrid was found innocent.

In May 2015, when Vallejos was found guilty, bailiffs and law enforcement jumped on Vallejos after he knocked over a water jug on the defense's table, sending the courthouse on lockdown.

Judge apologizes after blaming victim for being sexually abused

Flagstaff is no a stranger to national headlines from the court system, but it’s not often that the views of the judge become larger than the crime itself.

Former Judge Jacqueline Hatch’s words made national headlines after a September 2012 hearing in which she told a woman who had been groped by a former Department of Public Safety officer in a bar "if you wouldn't have been there that night, none of this would have happened to you."

The victim demanded an apology, which Hatch eventually offered after a petition garnered more than 10,000 signatures.

After DNA in two separate cases of sexual assault and beatings led to a match, Flagstaff police officers began to suspect the city had a serial rapist.

The second victim was attacked in January 2013 after a man offered to drive her home from the bars downtown. She was found on Lonetree Road the morning after the attack.

The case was broken open when a female officer posed as a drunk college student and later testified that Gregory Woody Jr. groped her, tried to kiss her and picked her up in attempt to carry her to his truck early Aug. 10, 2013.

Woody Jr. was sentenced to 113 years in prison after being found guilty of six counts of sexual assault and a slew of related charges.

Since those decisions were made, thousands of hours of footage have been filed in thousands of cases that include allegations of police brutality.

The footage united the city when Tyler Stewart's death was recorded. In recent officer-involved shootings, the footage has allowed for more detailed conversations on the decisions police officers make on a daily basis.

To say the federal slavery charges levied against the owners of a Flagstaff lingerie shop caught most residents by surprise would be an understatement.

Investigators called the case a “modern-day slavery” operation and alleged that nine Vietnamese workers were brought into Flagstaff and paid little to nothing for years of work. However, the case began to fall apart once it became apparent that the victims had lied to immigration officials.

The shop owners took a plea deal that ended in three years of probation and payments totaling $156,000 to the victims.

While there were only 10 arrests or over 100, Tequila Sunrise has become a yearly event that causes frustration for some and sparse early morning memories for others.

The annual event garnered national attention when a thousand “out of control” students gathered at The Grove for a party that spilled out into the streets in 2014, according to Flagstaff police officer Lance Roberts at the time. NAU’s Homecoming Parade used to travel through the same streets as Tequila Sunrise, but the university has since made the decision to hold the parade on campus to separate the university from downtown debauchery.

Since the move, the downtown party has become more tightly regulated by law enforcement, and has recently decreased in violations.

No homicides in Flagstaff for more than two years

In December 6, 2012, a man was found dead covered in blood in a camper shell trailer on East Spruce Avenue.

That was the first investigated homicide in Flagstaff for more than two years. The most recent homicide at the the time happened in September 2010 when Charles Brown, 48, beat his girlfriend to death in an East Route 66 motel room.

The stretch of no reported homicides in Flagstaff was the longest since 1967.

As we enter the 2020s today, here's a collection of all of our stories looking back at the 2010s, from education to weather, from the city to …

While one of the four co-defendants in the September 2017 murder at the L Motel received three years probation as part of a plea agreement, th…

A mistrial has been declared in the case of NAU shooter Steven Jones.

For drive-by shooting and ‘senseless’ murder, Puentes-Ortiz sentenced to life in prison

A cold-blooded monster. Abraham Puentes-Ortiz remembered the way a prosecutor described him during the trial, and in front of Judge Cathleen B…

While some fell to the ground, some ran down the sidewalk, and others roamed around their favorite bars, Tequila Sunrise was seen by most as c…

Thousands of people packed the streets of downtown Flagstaff on Saturday for Tequila Sunrise, but this year’s annual binge-drinking event was …

Despite a few unexpected challenges, Northern Arizona University and Coconino Community College made considerable development in their campuse…

Though 10 years is only a sliver of the histories of Northern Arizona University and Coconino Community College, the last decade transformed t…

Coconino County Sheriff's Office is investigating a death after a shooting in Cosnino that occurred in the early morning hours of Dec. 26.

As the second largest county in the contiguous United States by area, a lot is bound to happen within Coconino County every year. Here are jus…

On New Year’s Day, Flagstaff police responded to a man who was killed by a train at the crossing near East Route 66 and East Ponderosa Parkway.

Police tape stretches across a section of East Franklin Avenue on the edge of the Northern Arizona University campus where Steven Jones, 18, is accused of shooting four fellow university students early on Oct. 9, 2015. Colin Brough, 20, died at the scene.

Michael "Buddy" Vallejos, 23, is wrestled into handcuffs by court bailiffs after reacting violently to hearing a guilty verdict in his trial for second-degree murder in the 2013 stabbing death of 23-year-old Juan Hernandez. Vallejos was also found guilty on a charge of assisting a criminal street gang and aggravated assault of another west-side gang member. Vallejos's reaction to the verdict and the reaction of his family members in the courtroom caused the Coconino County Superior Court to go into lockdown while his supporters were escorted from the courtroom and the building. 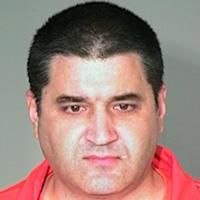