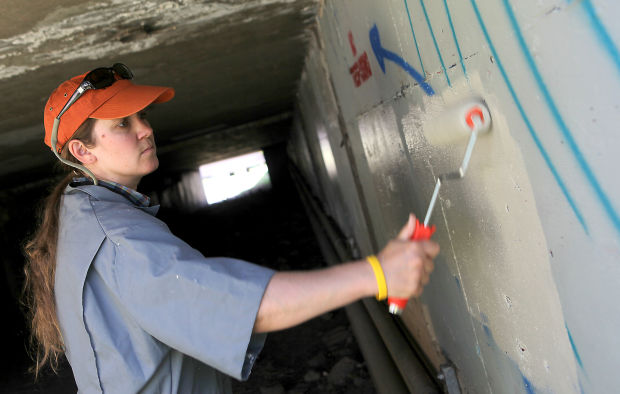 Cyndy Perger, a code compliance officer with the City of Flagstaff, paints over garaffiti in a tunnel near City Hall Wednesday morning. The city's Graffiti Busters program is recruiting volunteers to help paint over graffiti. (Jake Bacon/Arizona Daily Sun) 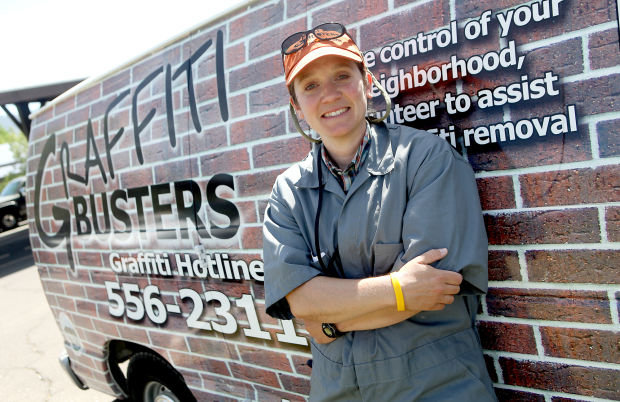 Last month, police arrested a 19-year-old Culver City man after they found him with a can of pink "Hardcore" spray paint.

He was on a family trip to the area and ducked out of his parents' hotel room at the Marriott to tag his moniker "BRO," as well as his group's name -- the "Mid Class Rebels" -- across west Flagstaff, according to a police report.

Days later, two other young males, ages 17 and 21, were also arrested with cans of spray paint. They had been tagging the words "Coke" and "FLG."

All of the males were arrested for criminal damage, among other charges.

The Flagstaff Police Department says it's important not only to catch graffiti artists in the act, but also to cover up their criminal damage quickly and reduce the exposure to their markings.

"If the graffiti is covered quickly, it eliminates this 'benefit'. It is also an important service offered to the victims of this crime," said Chief of Police Kevin Treadway.

Now, the city of Flagstaff is looking to enlist volunteers to help fight the eyesore.

Their Graffiti Busters program, which is run by the Code Compliance office, lets residents who apply to become volunteers borrow the program's van, which is equipped with glossy logos, ample paint stains and buckets of donated supplies.

"We just launched the program a couple weeks ago," said Code Compliance Officer Cindy Perger. "We want to have a base number of volunteer hours of operation per week. Right now, (we) have just about four established volunteers."

She added that she's received about a half-dozen volunteer applications in recent weeks. Perger works with adopt-an-avenue, adopt-a-park and adopt-a-trail. Her aim is to take Graffiti Busters down the same path.

In the past, police officers have taken it on themselves to go out and paint over tags when they have time, but the city doesn't fund or mandate graffiti abatement. Other clean-up efforts were done by select and occasional groups of volunteers.

The combined result was a spotty effort to get rid of graffiti, Boughner said.

"We'll try to keep this going for years by using volunteers instead of the spotty coverage we've done using dedicated groups," he said. "We're purposely going slow. We're not trying to sign up 700 volunteers in one week. We're looking to grow responsibly."

The code officers are already quick to paint over offensive graffiti that includes phallic symbols, curse words or overt gang symbols. And Perger spends a lot of time painting over the same old utility boxes, street signs and walls.

But their hope is that the new approach will earn them enough consistent volunteers to finally address the everyday criminal damage caused by kids with spray paint and permanent markers.

They'd like to develop a cadre of Good Samaritans willing to help out in their neighborhoods on a regular basis and also be available to go out on calls to clean up graffiti when needed.

"We operate the budget on bare bones primarily with donations," Perger said, pointing out the low cost involved in using donated and reject paint combined with volunteer labor. "Luckily, we can get a lot done on a small amount."

This weekend, with the help of volunteers from Habitat for Humanity, Graffiti Busters will paint the entirety of the Milton Road underpass at the train tracks.

Sherwin Williams has given the city some 90 gallons of paint to allow them to complete the job all in one color. Typically, they have to repaint in a patchwork of what colors are available.

For more information or to apply as a volunteer, visit www.Flagstaff.az.gov/graffiti.

Local law enforcement agencies are now relying on mental health professionals to manage mental health calls as opposed to officers. As of this month, people calling 911 with a mental health crisis in Flagstaff and Coconino County will be forwarded to the Crisis Response Network.

The City of Flagstaff's new municipal court building is now open in the downtown area with a much-needed update.

Cyndy Perger, a code compliance officer with the City of Flagstaff, paints over garaffiti in a tunnel near City Hall Wednesday morning. The city's Graffiti Busters program is recruiting volunteers to help paint over graffiti. (Jake Bacon/Arizona Daily Sun)