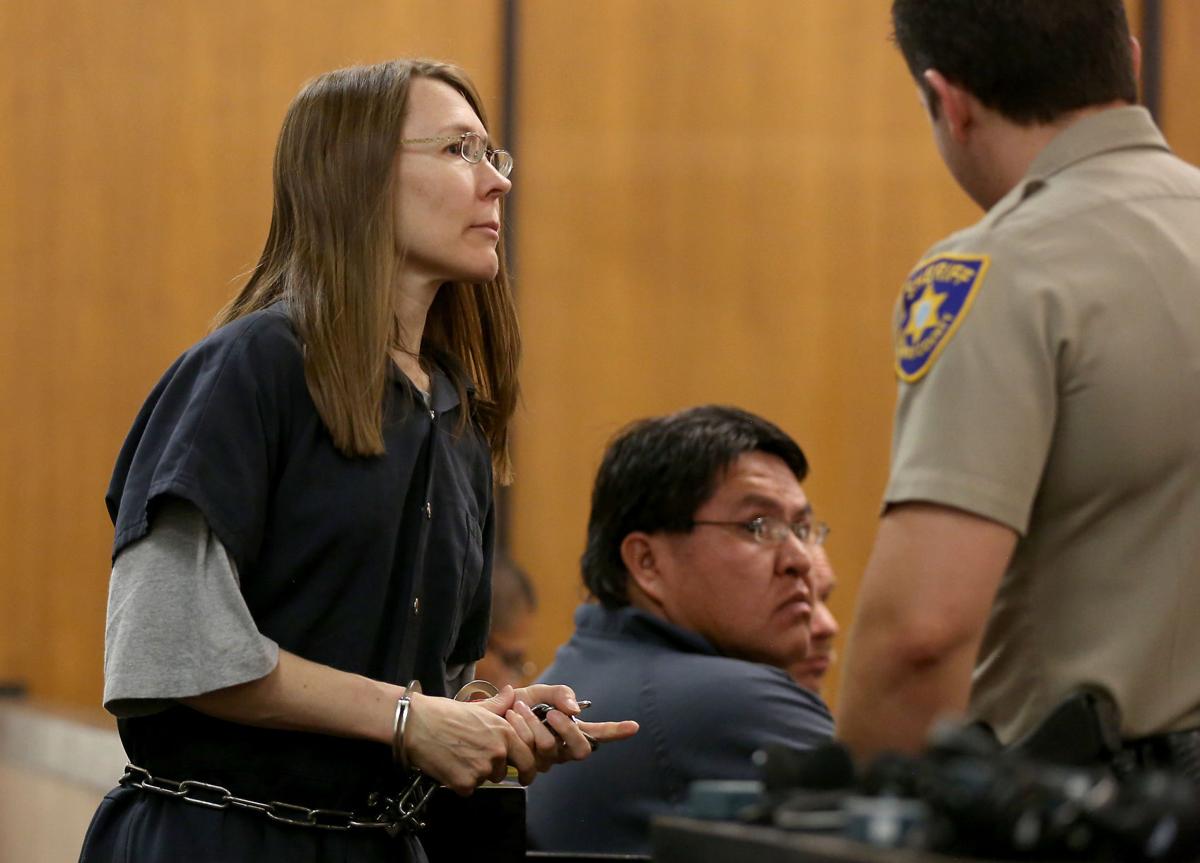 Susan Jacobson talks with a detention officer before her sentencing hearing at Coconino County Superior Court Friday morning. The judge sentenced Jacobson to natural life in prison without the possibility of parole for the first-degree murder of her domestic partner. 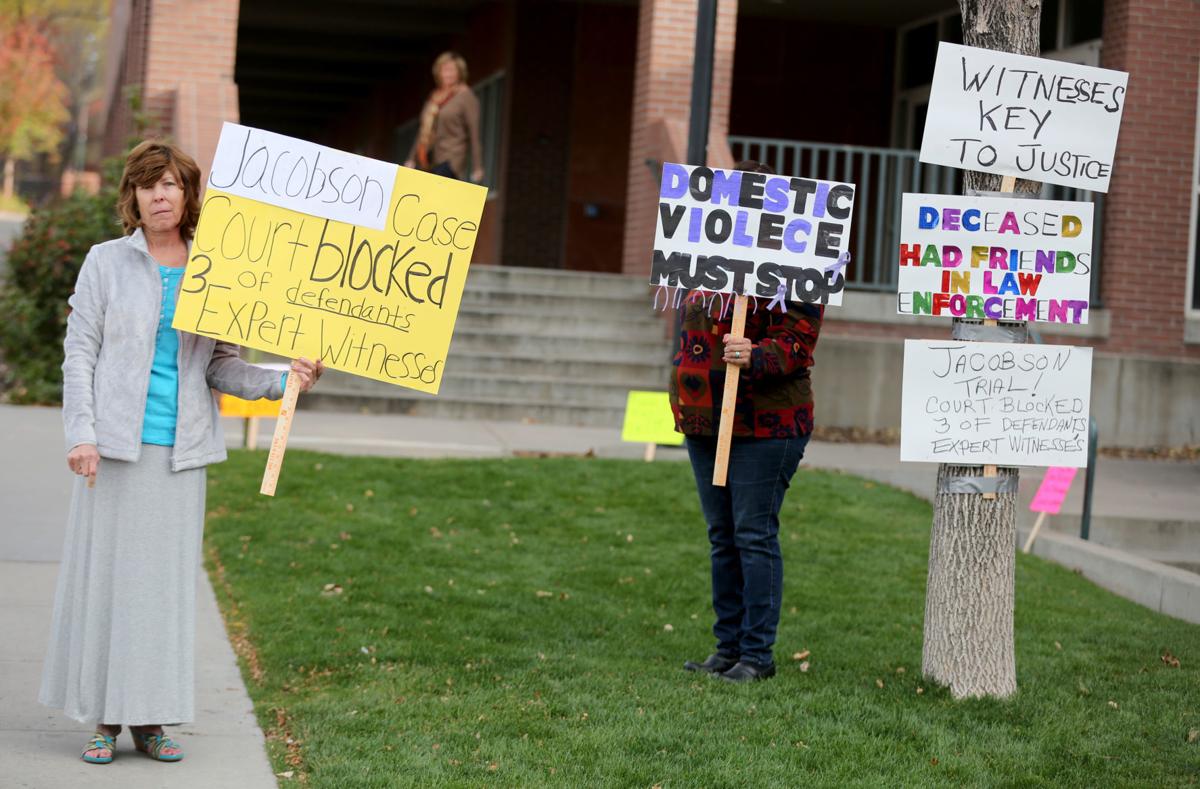 Joyce Canepa, left, protests outside the Coconino County Courthouse Friday morning before the sentencing hearing for her daughter, Susan Jacobson, on a charge of first-degree murder. 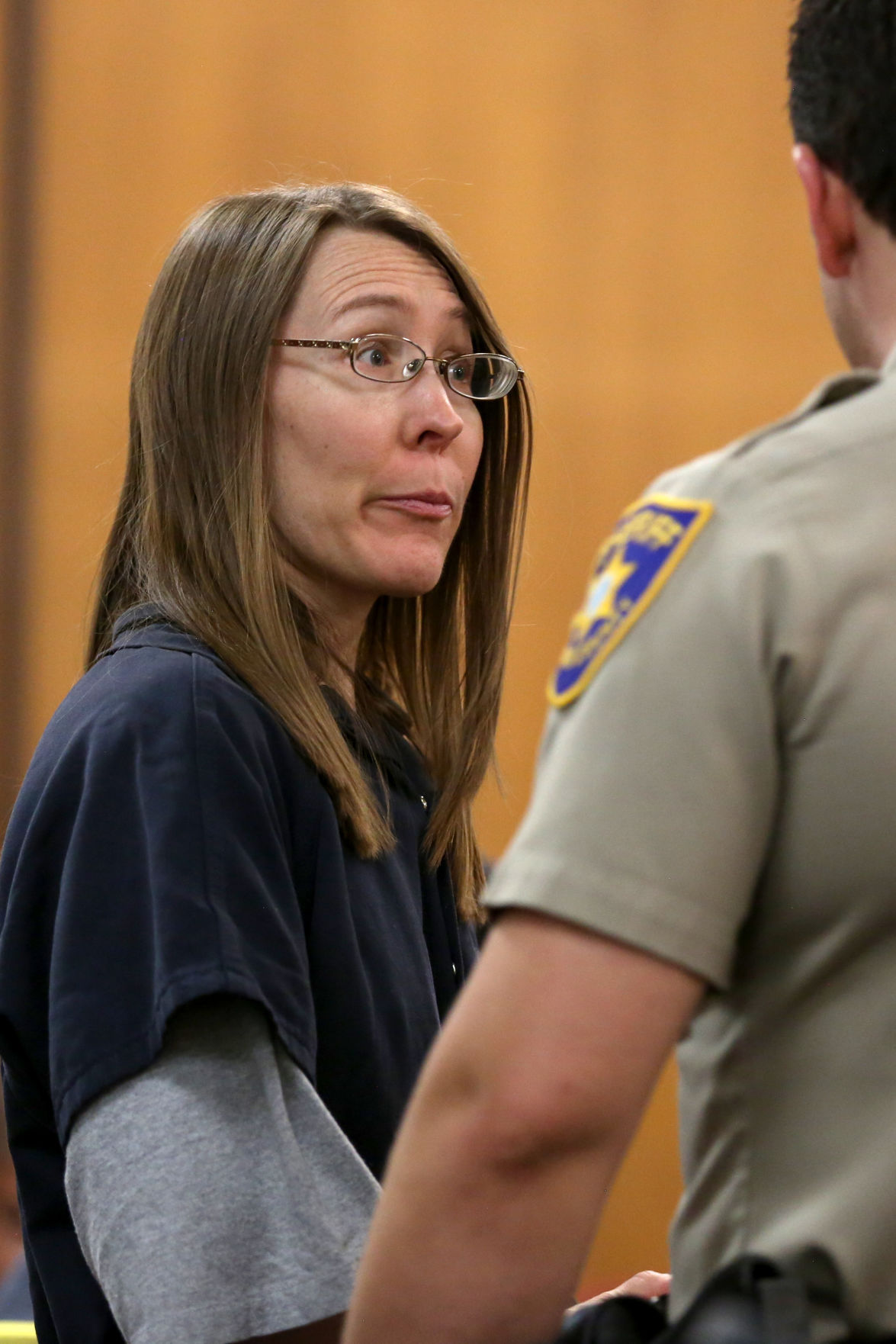 Susan Jacobson talks with a detention officer before a sentencing hearing at Coconino County Superior Court Friday morning. Jacobson was in court to be sentenced after being found guilty of first-degree murder in the death of her domestic partner.

Susan Joy Jacobson wept Friday morning as a Coconino County Superior Court judge sentenced her to natural life in prison without the possibility of parole for the murder of her common-law husband — a conviction she is determined to appeal.

Last month, a jury found Jacobson guilty of first-degree murder and three counts of tampering with physical evidence after she fatally shot Marvin Neal James, 54, in the pre-dawn hours of Feb. 26, 2015, inside their Doney Park home. Jacobson, who had a 3-year-old son in common with James, gave birth to the couple's second child just days after her arrest.

"When one person takes the life of another human being, that loss is irreplaceable," said Judge Cathleen Brown Nichols. "It is clear that these boys have lost their father and now their mother. (Marvin James' father) and Marvin's mother have lost their son forever. There's a lot of damage that's been done by your conduct."

During the trial, the jury heard testimony about how Jacobson retrieved James’ .22 caliber revolver in the middle of the night and shot him once in the head while he was in their bed. At the sentencing, a representative from Victim Witness Services for Coconino County read a statement by James’ mother. In it, she said life in prison without the possibility of parole was the right sentence for Jacobson.

“She took the life of our son,” she said. “Who is to say she would not to the same to another human being? We can never see or hold Marvin again, so I feel she should not have the chance of life outside of prison.”

“I’ve had numerous calls from Marvin’s friends and my friends to congratulate me on the outcome of the trial,” he said. “Unfortunately, there are no winners here.”

James’ father said the man only stayed with Jacobson because he loved their 3-year-old son. He then accused Jacobson of abusive and neglectful behavior, which he said caused health problems for the boy. He also said the child has made comments indicating he saw James’ dead body.

“Probably the saddest one of all is, ‘Daddy didn’t tell me goodbye,’” James’ father said, in tears.

When it was her turn to speak Friday, Jacobson vehemently denied ever abusing her son or letting him see his father’s dead body.

“(He) was asleep,” Jacobson said, crying. “He never saw anything. No lights were ever on in the house. I always did my very, very best and he always came first among everything in my life. I protected him as much as I could.”

Both children were placed out of state with Jacobson’s sister, who listened to the sentencing over the phone.

At trial, Jacobson’s attorney claimed she shot James in self-defense after he kicked the pillow she was using to protect her pregnant stomach and threatened her life. She said she believed she was racing James to retrieve the gun, got to it first, turned back to the bed and fired.

Instead of calling 911, she wrapped up the dying man's body. She moved it onto a makeshift ramp she had created and, according to prosecutors, tried to push it out the window. She cleaned the crime scene, then threw away the bedding and buried the gun.

Jacobson was stoic when the jury delivered the verdict in September. At her sentencing Friday, she wept.

“So much information has not come forward in this case and at the appropriate time it will,” she said.

During and after the trial, Jacobson’s supporters questioned why the judge would not allow the defense to bring in psychologists who were expected to testify that Jacobson had post-traumatic stress disorder as a result of chronic domestic violence. The judge also would not allow a pregnancy expert to testify on behalf of the defense.

On Friday, Jacobson’s family posted signs outside the Coconino County Courthouse protesting her conviction. They said things like “PTSD is real” and “Domestic violence must stop.” Jacobson’s mother, Joyce Canepa, said her daughter did not get a fair trial.

Jacobson’s attorney, Bruce Griffen, told the judge he will appeal the conviction and said people from all over the country have contacted him in support of his client. He maintained Friday that Jacobson was a good person who was justified in shooting James in self-defense.

“It has been privilege to try to help Susan,” Griffen said, his voice catching in his throat.

He also talked about compassion for Jacobson's family and children, as well as James’ loved ones, a sentiment Jacobson echoed.

“I will never be able to describe the pain and the concern that I have for everyone, the many prayers that I will continue to pray for healing for everyone,” she said. “I just pray with all my heart that my boys can be surrounded in a positive environment. That’s all everyone has wanted for them, to be filled with love in a positive environment. This hate has to go.”

For most criminal convictions, the law gives the trial judge the discretion to choose a sentence within a defined sentencing range based on the aggravating and mitigating factors of the case. With a first-degree murder conviction, however, Arizona law requires the judge to sentence the defendant to natural life in prison without the possibility of parole unless the prosecutor has indicated ahead of trial that they intend to seek the death penalty, which did not happen in Jacobson's case.

That means Jacobson must remain behind bars until she dies unless her appeal is successful.

“What Miss Jacobson did on that night did not just affect Marvin. It created a ripple of pain throughout the lives of his family, his children, his friends and this community,” said prosecutor Ammon Barker. “Because of that, she has to be punished. That’s the law.”

The judge also sentenced Jacobson to one year in prison for each evidence tampering conviction. However, those sentences are irrelevant because of the murder sentence.

Inside some of the world’s most unusual vaccination centers

What the Colonial Pipeline Hack Means for Fuel Supplies

What the Colonial Pipeline Hack Means for Fuel Supplies

2016 in Review: Year of controversy in local crime

Controversy surrounded many of the top criminal justice stories of 2016.

Susan Jacobson talks with a detention officer before her sentencing hearing at Coconino County Superior Court Friday morning. The judge sentenced Jacobson to natural life in prison without the possibility of parole for the first-degree murder of her domestic partner.

Joyce Canepa, left, protests outside the Coconino County Courthouse Friday morning before the sentencing hearing for her daughter, Susan Jacobson, on a charge of first-degree murder.

Susan Jacobson talks with a detention officer before a sentencing hearing at Coconino County Superior Court Friday morning. Jacobson was in court to be sentenced after being found guilty of first-degree murder in the death of her domestic partner.