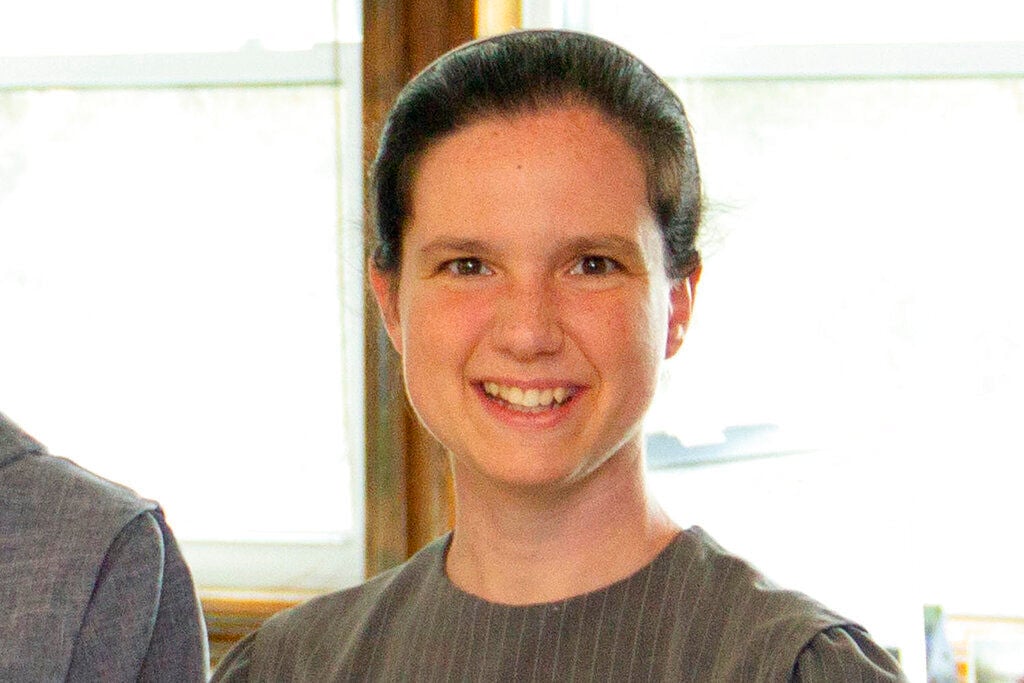 This February 2019 photo released by Erica Sauder shows Sasha Krause, who authorities say disappeared from a Mennonite community near Farmington, N.M., in January. Her body was found more than a month later in the forest outside Flagstaff. 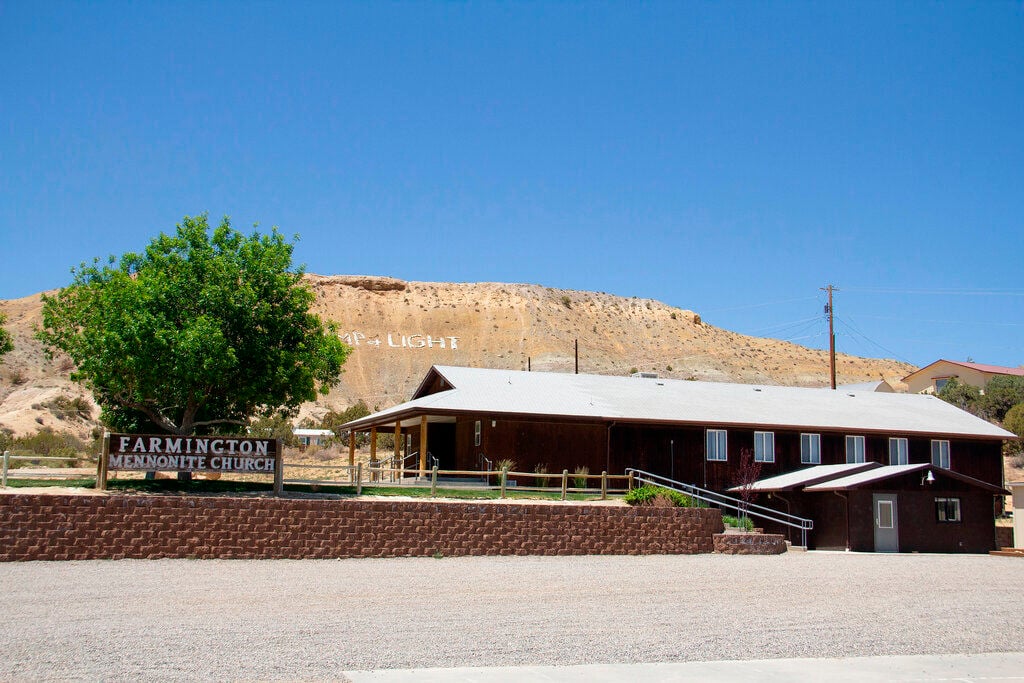 This undated photo provided by Erica Sauder shows the Farmington Mennonite Church outside Farmington, N.M. Authorities say Sasha Krause disappeared from the church community in January. Her body was found more than a month later in the forest outside Flagstaff. 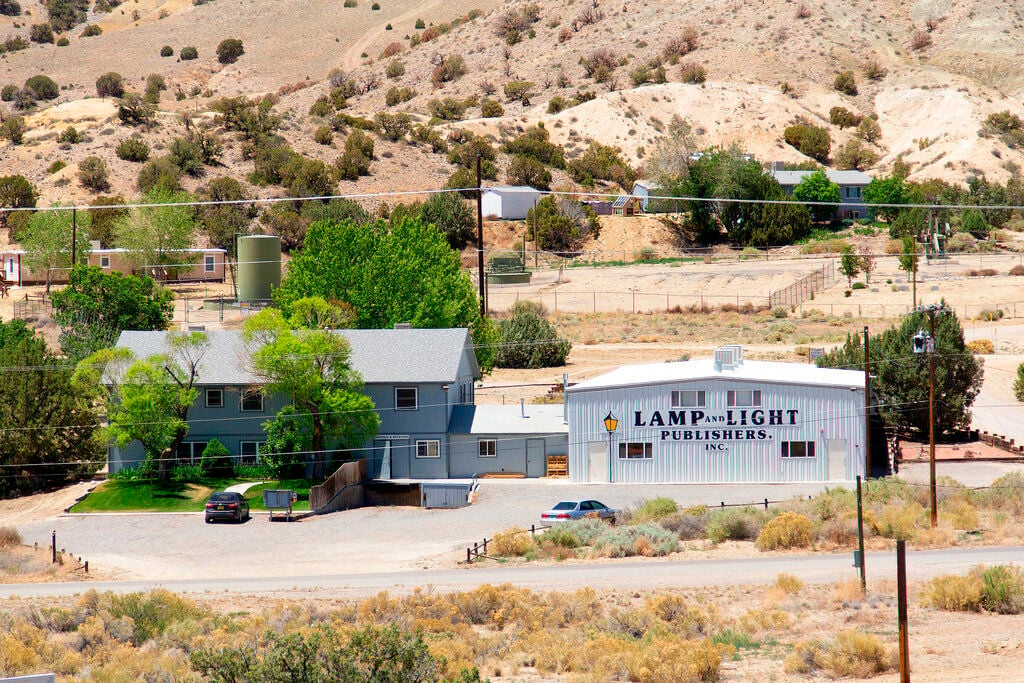 An autopsy has shown that Sasha Krause, a Sunday school teacher from a Mennonite community in New Mexico, was killed by a combination of blunt force trauma and a gunshot wound.

Krause was found face down in the forests outside of Flagstaff in February. Her hands were bound behind her with duct tape and her underwear was missing. The 27-year-old Sunday school teacher had disappeared more than a month earlier.

Michael Madsen, Coconino County Medical Examiner, wrote in his report that a pregnancy test came back negative and did not list any sexual injuries.

A 21-year-old U.S. Air Force airman stationed near Phoenix has pleaded not guilty to murder and other charges. Raised in a Mennonite family in Wisconsin, Mark Gooch joined the military to escape what he told investigators was a difficult, sheltered and restricted life, according to sheriff's records obtained by The Associated Press.

Authorities are still trying to determine how her body ended up steps away from a makeshift camp off a lonely two-lane road that cuts through the canyons and groves of towering pine trees.

Sheriff’s officials used cell phone records to link Gooch to Krause, but his attorney Matthew Springer said that doesn’t mean his client is a killer. Gooch is jailed without bond.

When authorities first questioned Gooch at the base, he said he thought it was about driving his motorcycle too fast. Coconino County Sheriff's Office detective Lauren Jones asked him about his recent travel, his family history and church. At the end of the 75-minute interview, she asked pointedly: “Did you abduct Sasha Krause?”

“Did you kill Sasha Krause?”

The records hint at disdain for the Mennonite community by Gooch and at least two of his brothers. He never became part of the church, a process that involves a period of study, a commitment to be a follower of Jesus, and baptism usually in teenage years.

Gooch said he felt like an outsider because his family wasn’t born into the religion. He once told a friend that he found life on his family’s organic dairy farm depressing and wanted to live like other people. His older brother, Sam Gooch, told investigators his brother holds a grudge against the Mennonite community over perceived mistreatment, but he didn’t elaborate.

Mark Gooch acknowledged traveling to Farmington, New Mexico, on Jan. 18, when Krause was reported missing. He said he had time for a long drive.

He left the base early that Saturday morning and drove north, past Flagstaff’s snow-capped mountains and through the Navajo reservation, stopping for food and then for gas in Farmington.

He said he went to the Mennonite church on the outskirts of town where the words “Lamp + Light” are spelled out in painted white rocks on the side of a mesa — a nod to the publishing ministry where Krause worked. He said he wanted to attend a service because he missed the fellowship of Mennonites. But he hadn’t checked to learn when services would be held and instead hurried back to the base to meet a friend the next day.

Detectives say there were inconsistencies in Gooch's story. Cell phone records indicate he was near the church and in the forests outside of Flagstaff after midnight. Surveillance video at the base shows his car returned about 7 a.m. the day after he left, although Gooch said he thought it was no later later than 2 a.m.

Gooch had his car detailed a day after the body was found. Also, Gooch's phone was the only device that communicated with the same towers as Krause's phone before her signal dropped off west of Farmington, prosecutors said. They are awaiting DNA test results and ballistics to match a bullet believed to have killed Krause to a rifle that belonged to Gooch.

Gooch was assigned to Luke Air Force Base in October and worked in equipment maintenance. Base officials wouldn't say whether he's ever faced disciplinary action.

The case has entangled other members of Gooch’s family. Sam Gooch was arrested last month by the Coconino County Sheriff's Office after authorities said they suspected he flew to Arizona to pick up the rifle used in the killing. He was released on bond and hasn’t been charged by prosecutors.

Sam Gooch said the family left a Mennonite church in Wisconsin around 2015. As the siblings grew older, some went separate ways but kept in touch through occasional phone calls and text messages.

In one text exchange in mid-April, brother Jacob Gooch, a state trooper in Virginia, told Mark and Sam he gave a Mennonite a ticket and coughed on the driver “so he would spread Corona to the wedding they were going too. lol.” The other brothers encouraged the behavior, according to the messages.

Virginia State Police spokeswoman Corinne Geller said the text exchange is part of an internal investigation into Jacob Gooch, who was placed on administrate leave May 8 as part of a separate criminal investigation. She declined to discuss details but said the probe is unrelated to the death of Krause.

Authorities don’t have any indication that Mark Gooch and Krause, who both came from large families, knew each other. Calls to numbers listed for the Gooch family and Krause's parents went unanswered or unreturned.

In what has been chalked up to coincidence, one of the elder Gooch brothers attended Bible school with Krause in her hometown in Texas several years ago and had dinner at the Krause home.

A former school teacher in Texas, Krause arrived in Farmington two years ago to work for the publishing ministry. She knew Spanish, a skill that proved valuable to the ministry known for its outreach to Spanish-speakers, and she was learning French.

Krause was part of a group of conservative Mennonites where women wear head coverings and long dresses or skirts. Men wear plain clothing. They practice non-resistance and believe in forgiveness, said Paul Kaufman, general manager of Lamp and Light Publishers.

Krause also was a poet whose words became hymns. Some were sung at her memorial service. Her father Robert Krause described her as friendly and deeply compassionate with “zero ability” to hide stress or emotion.

On the evening she disappeared, Krause drove to the church to pick up materials for use as she filled in at Sunday school. She parked her silver Ford Focus close to the sidewalk and went inside the church.

She wouldn’t be seen alive again by anyone in her community.

Gooch’s phone records indicate he returned to the forest a couple nights after authorities said he left Krause’s body beneath the brush.

A camper discovered her body while gathering firewood. She noticed something white on the ground amid the black volcanic cinders and dry pine needles.

Weeping and shaking, the camper drove to a nearby visitor center and told staff she had seen legs and shoes.

The news spread through Mennonite communities across the world.

“It hit people, it became very personal to people,” Kaufman said. “It was so wrong.”

This incredibly small reptile species was just discovered in Madagascar

This incredibly small reptile species was just discovered in Madagascar

Underwater Santa puts on a show at Seoul aquarium

Underwater Santa puts on a show at Seoul aquarium

This February 2019 photo released by Erica Sauder shows Sasha Krause, who authorities say disappeared from a Mennonite community near Farmington, N.M., in January. Her body was found more than a month later in the forest outside Flagstaff.

This undated photo provided by Erica Sauder shows the Farmington Mennonite Church outside Farmington, N.M. Authorities say Sasha Krause disappeared from the church community in January. Her body was found more than a month later in the forest outside Flagstaff.