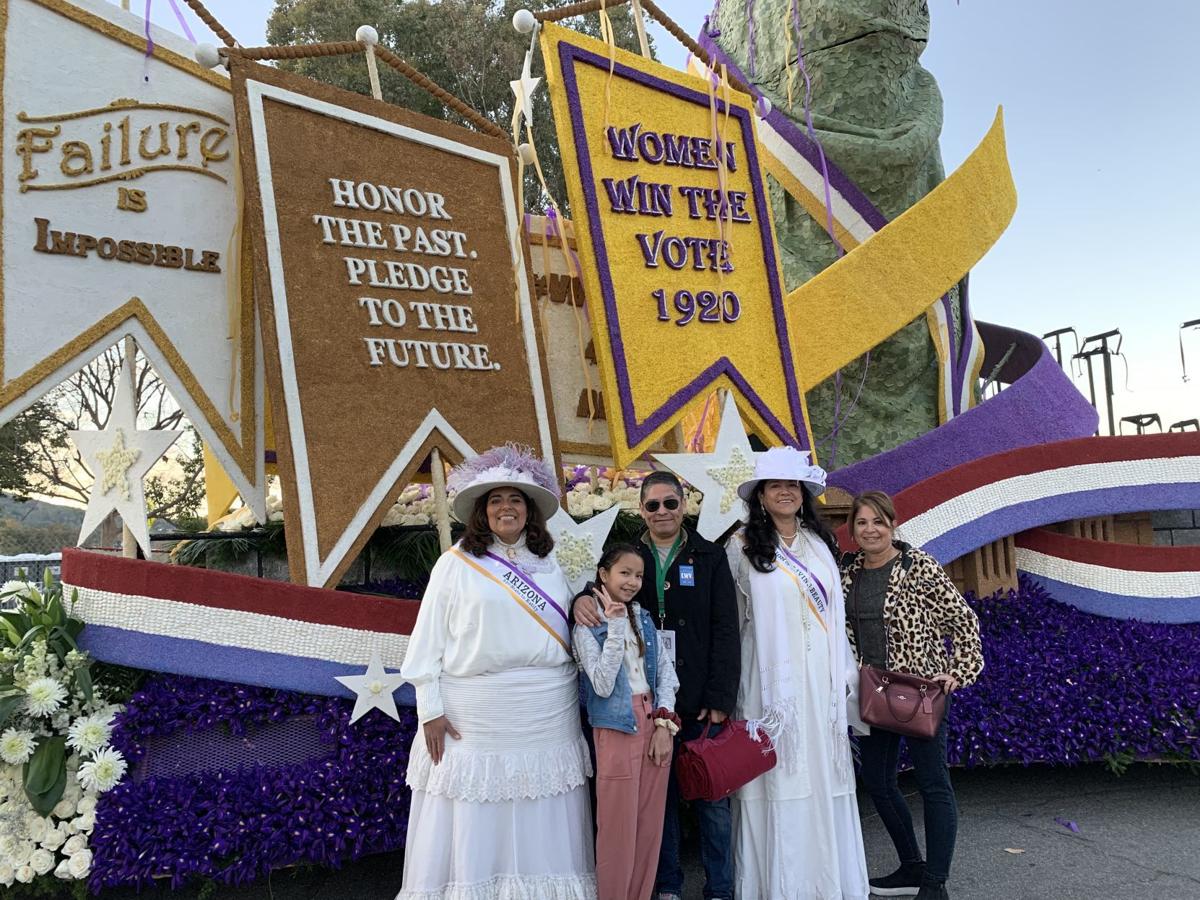 Coconino County Supervisor Liz Archuleta stands beside the “Years of Hope. Years of Courage.” float with the float designer and his family. 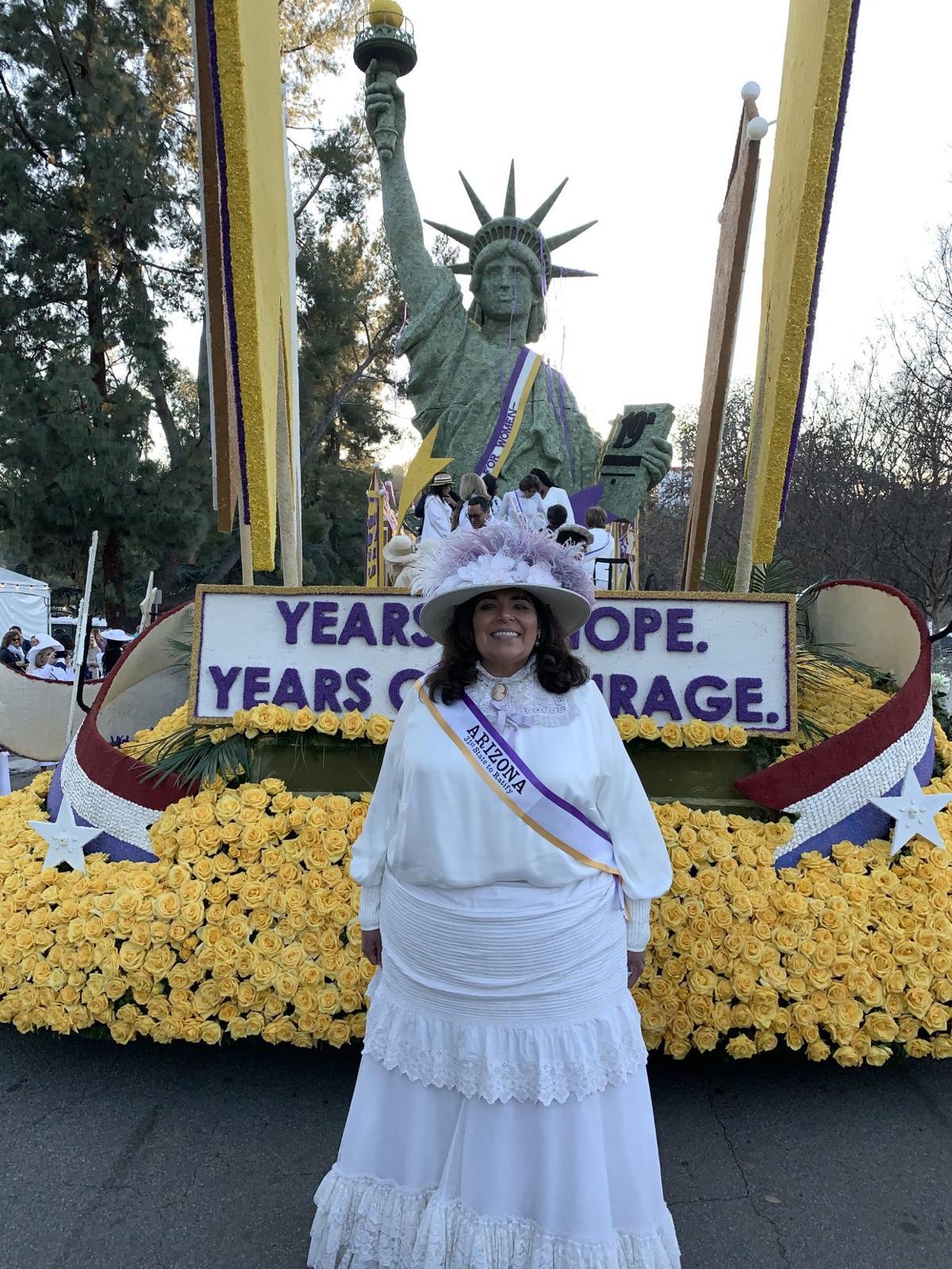 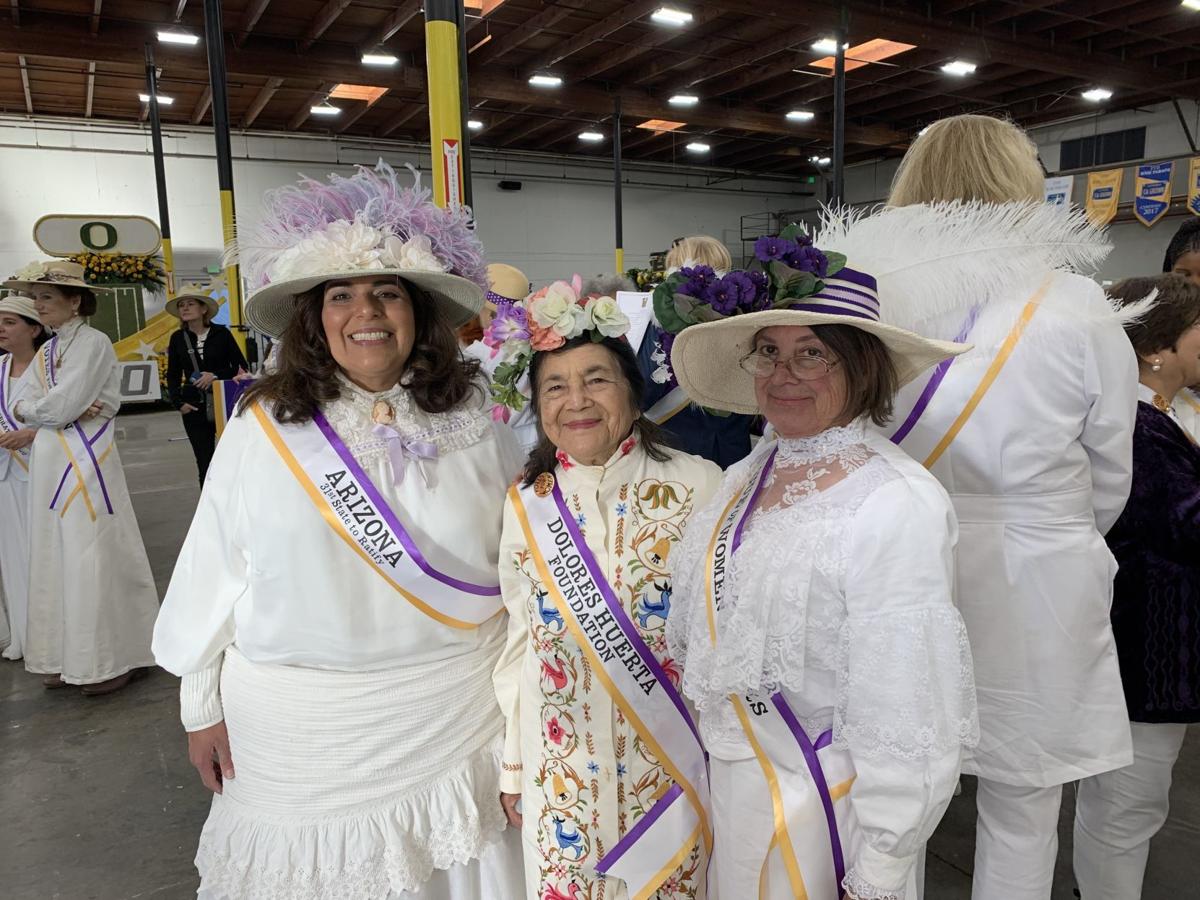 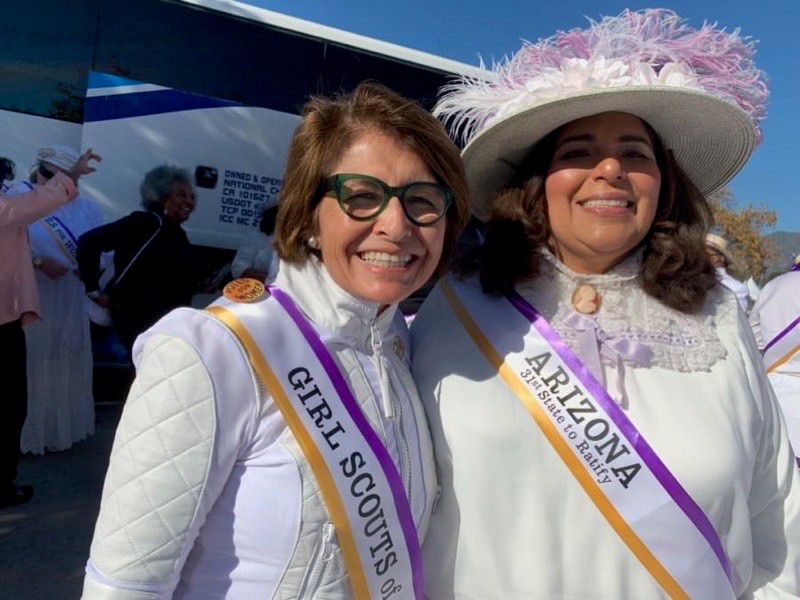 Coconino County Supervisor Liz Archuleta stands beside the “Years of Hope. Years of Courage.” float with the float designer and his family.

Just like the suffragists of the early 1900s, a horde of women dressed in white floor-length dresses, ostentatious hats and colored sashes marched down a populated street last week, signs declaring “votes for women” in hand.

In honor of the 100th anniversary of the 19th Amendment, which was passed by Congress on June 4, 1919 and gave women the right to vote, 100 women walked behind a 30-foot-tall Statue of Liberty float in the Rose Parade in Pasadena, California on New Year’s Day, representing 33 of the 36 states needed to ratify the 19th Amendment and organizations that continue to promote equal rights.

Among them was Coconino County Supervisor Liz Archuleta, who was selected to represent Arizona, the 10th state to give women the right to vote — in November 1912, less than a year after Arizona became a state.

“It was personally and professionally one of the greatest honors to represent all women and the beautiful, multicultural diversity of Arizona and just to express joy and thanksgiving for all the women before us and the history that made voting possible for us,” Archuleta said.

As they walked the almost 6-mile parade route, some onlookers began to cry or cheer in recognition of the float, which won the award for best representing this year’s overall parade theme: The Power of Hope.

The 50-foot long float, “Years of Hope. Years of Courage.” included the Statue of Liberty, given her signature color by eucalyptus leaves, and large banners decorated with various small seeds and flowers. The base of the float included thousands of purple irises and gold, white and yellow roses.

According to the float description by designers Artistic Entertainment Services, the float itself represented a passage in time, starting from the walking suffragists and banners like “Women Win the Vote,” to Lady Liberty holding the 19th Amendment and banners representing the future at the front of the float, featuring phrases such as “Lifting as We Climb.”

“I just really appreciate the effort and the blazing of trails that women did for us to be able to vote — the effort and the determination and the will to make a difference in our country,” Archuleta said. “All of that was going through my mind as I was walking. It was emotional.”

Archuleta said watching the Rose Parade every New Year’s morning was a family tradition when she was a child. Attending the parade — as well as walking in it — was a first, though.

“We were always captivated by it, by how all the flowers and seeds are used to build these amazing, artistic floats,” Archuleta said. “I always thought it would smell so wonderful.”

The fragrance did not disappoint, she explained with a laugh.

After being recommended by a member of the National Association of Counties, Archuleta received the invitation to participate in the float about two months before the event, just after serving on a state committee to commission a statue celebrating the history of women’s suffrage in Arizona.

The statue of Frances Willard Munds, who led the suffrage movement in Arizona and became the first female senator in Arizona (and the second in the United States), will be placed in the plaza across from the State Capitol. Archuleta said the project should be completed by September.

In preparation for the Rose Parade, with help from Nancy Wardell, owner of Incahoots Vintage Clothing and Costumes, and seamstress Denise Flores, Archuleta was outfitted in garments from the era like those worn by Munds, “a great source of pride” to wear, Archuleta said.

Before the parade day, which began with a 3 a.m. bus ride, she and the other “out walkers” and parade participants spent about six hours on New Year’s Eve together, getting to know one another as they waited for their float to be judged.

“Our out walkers symbolize the vast and varied roles women play in our workforce today,” the float description stated. “Some walkers are teachers and city employees; others are artists and community builders.”

Archuleta met senators, county commissioners, nonprofit representatives and more female leaders from all over the country, as well as national leaders like Sylvia Acevedo, CEO of Girl Scouts of America, who rode in the float.

“I think all of us felt equally inspired to be in the parade and to represent women in history,” Archuleta said. “And at the same time it was inspiring to know what people are doing on a daily basis, whether individually or professionally, to promote women and ensure everyone has the right to vote.”

Among other initiatives and developments, the announcement of and first steps to the creation of a new $17 million “super” department topped c…