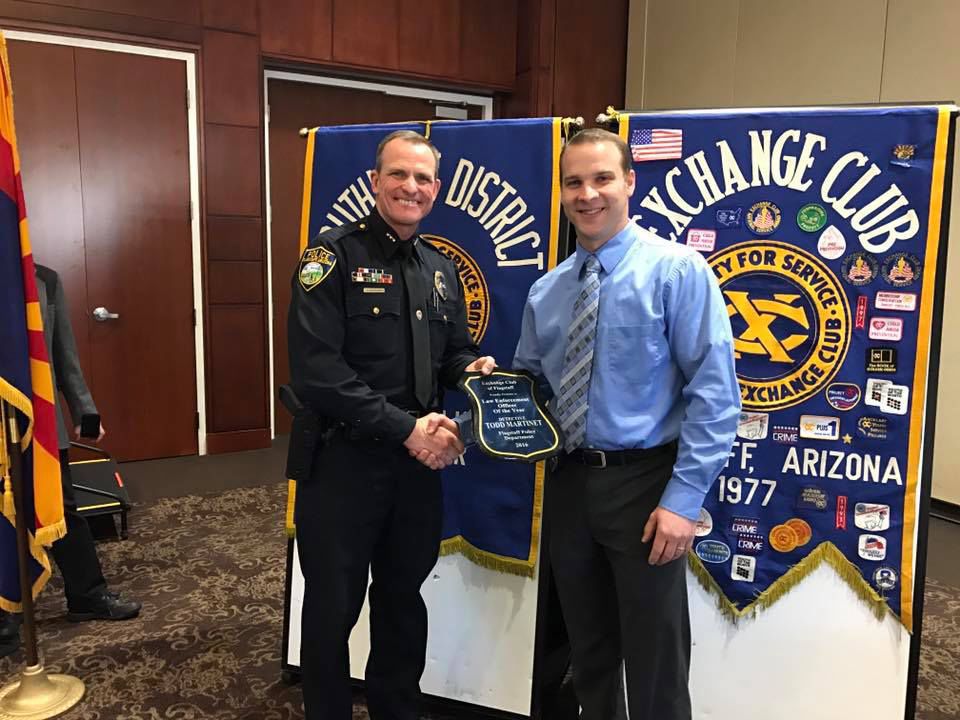 Flagstaff Police Department Deputy Chief Dan Musselman, left, presents the Officer of the Year Award to Detective Todd Martinet, right, at the Exchange Club of Flagstaff's 2016 Law Enforcement and Firefighter of the Year Awards Oct. 19. For more photos, visit this story on azdailysun.com. 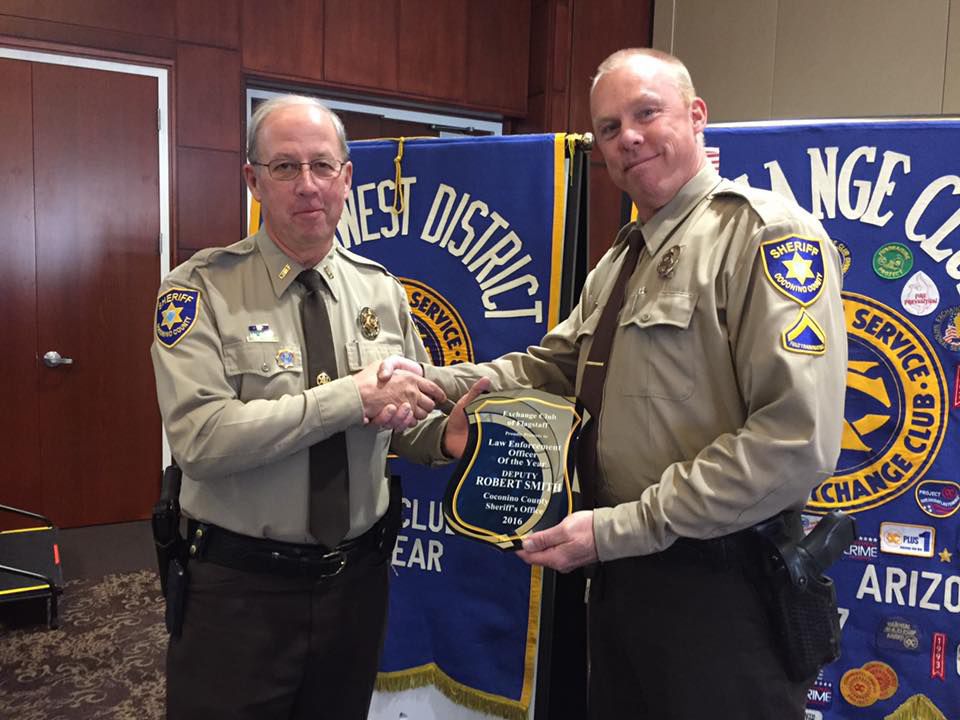 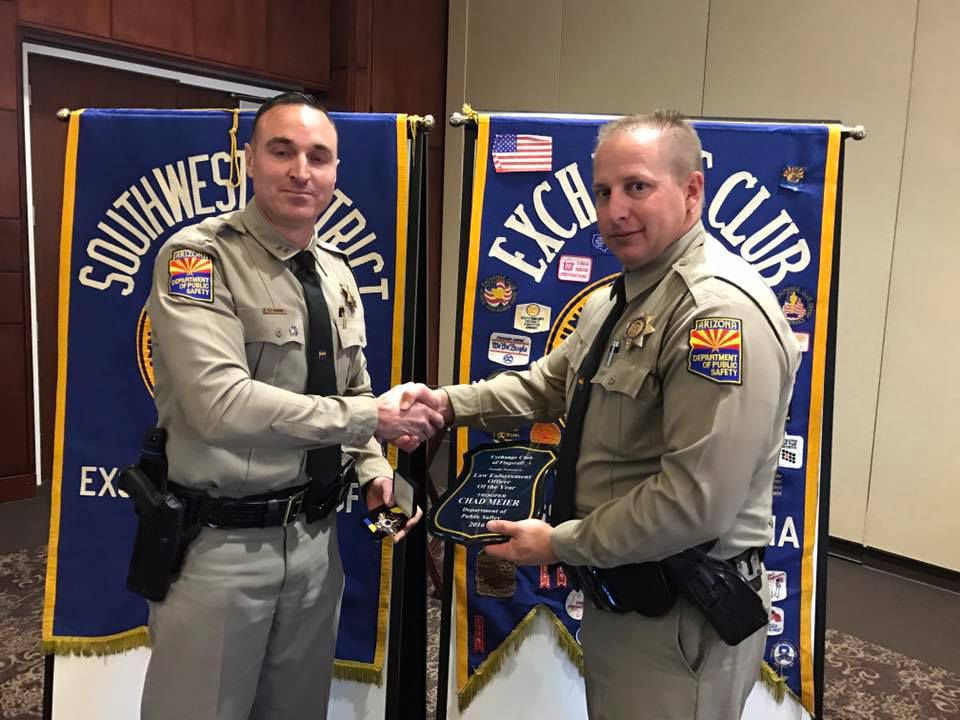 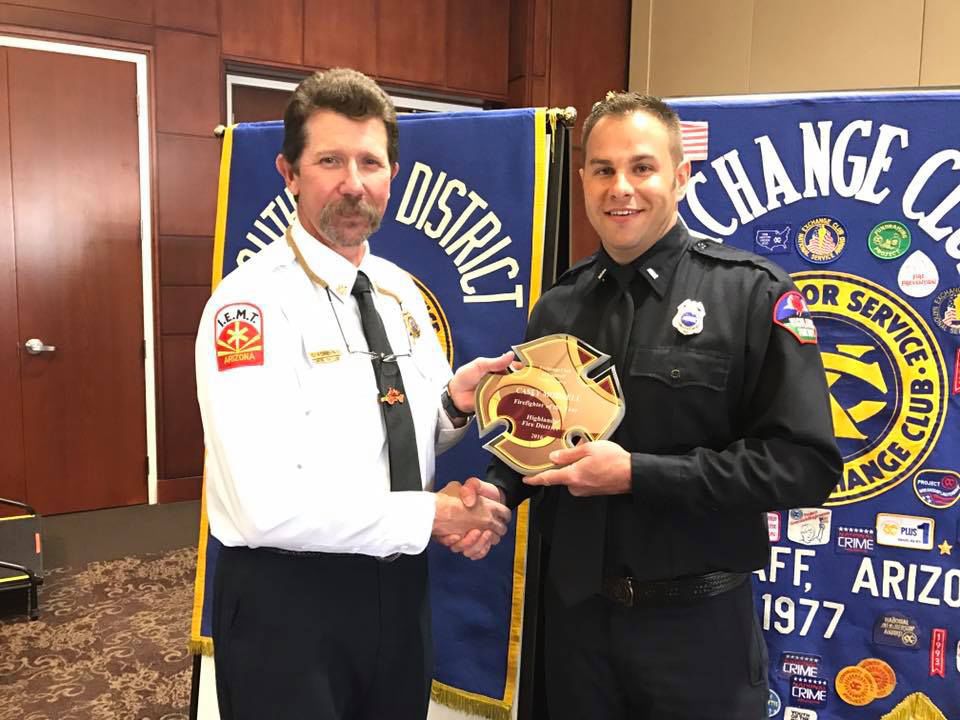 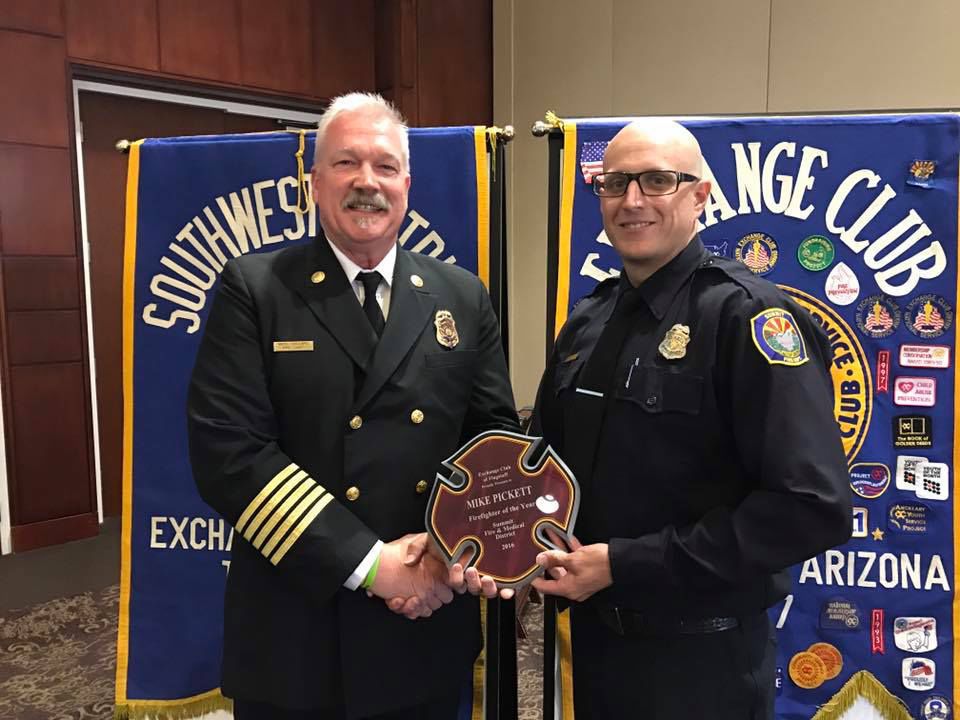 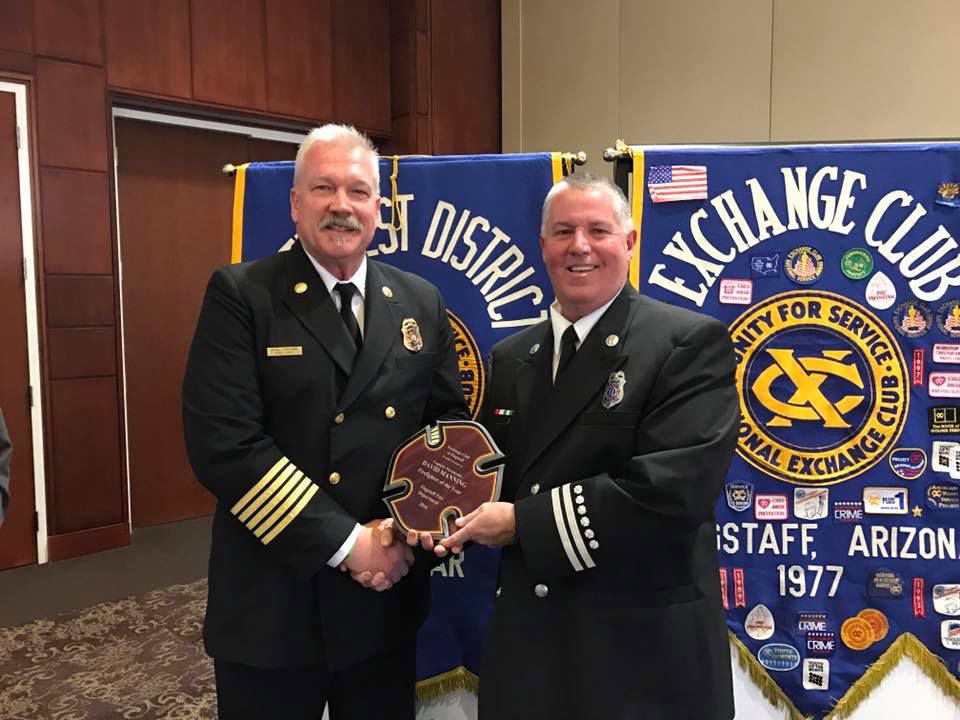 The Exchange Club of Flagstaff honored six local first responders at the annual Law Enforcement and Firefighter of the Year Awards Oct. 19.

The first Officer of the Year Award went to Detective Todd Martinet, an 11-year veteran of Flagstaff Police Department. He is one of the lead domestic violence detectives in FPD’s criminal investigations unit, as well as a member of the hostage negotiation team. FPD Deputy Chief Dan Musselman commended him for also assisting in running FPD’s mental health crisis intervention team, field training new officers on domestic violence laws and heading the team that helps officers maintain their mental health.

Deputy Robert Smith was the winner from the Coconino County Sheriff’s Office. Smith has worked at the Sheriff’s Office for six years. Chief Deputy Jim Driscoll described Smith as the kind of person who sees something that needs to be done and does it. Driscoll specifically cited his leadership roles in the Sheriff’s Office radar program and the internal crisis intervention team. He also credited Smith with mentoring kids as a youth football and baseball coach.

Smith said the cooperation between all the first responders in northern Arizona is exceptional.

“I don’t care if you’re wearing blue, gray, tan, green, brown, we work together with each other better than anywhere else in the United States that I have personally seen,” he said.

The third law enforcement honoree was Highway Trooper Chad Meier, who joined the Arizona Department of Public Safety in 2013. DPS Captain Ezekiel Zesiger said Meier deserved the Officer of the Year Award because of his dedication to drug interdiction efforts. Last year alone, Meier conducted more than 1,600 traffic stops, arrested 17 impaired drivers, and seized 26 pounds of methamphetamine and more than 6 pounds of heroin.

One of the Firefighter of the Year Awards went to Engineer Casey Modrell from Highlands Fire Department. Highlands Fire Chief Dirch Foreman said Modrell “exemplifies the definition of professionalism” and noted his infectious positive attitude. He also said Modrell is a mentor and “silent leader” at the fire department.

Mark Gaillard, who now serves as the fire chief for both Flagstaff Fire Department and Summit Fire and Medical Department, presented two Firefighter of the Year Awards. One went to Summit Firefighter/EMT Mike Pikett, who has been with the department for 10 years, including one as a volunteer. Gaillard commended Pikett for taking on many jobs, including wildland fire coordinator and wildland firefighter training lead instructor, head of the department’s radio program and public information officer.

The other went to Captain/Paramedic David Manning, who has been with Flagstaff Fire Department for 30 years. Gaillard talked about how Manning has been an engineer, a hazmat team member and part of the technical rescue team and a CPR instructor, among other roles. Manning has also taught fire science and emergency medical services for decades. Gaillard noted his passion for training others.

“I have a really strong conviction that in order to be an effective leader, you first have to be firmly committed to serving others,” Manning said. “The people that get into this type of work have that in them. That’s part of what they are, part of their very being.”

He said he will always be a firefighter in his heart.

The keynote speaker, Flagstaff Mayor Jerry Nabours, said first responders have a tough job and they do not get enough recognition for it.

“Don’t any of you get discouraged,” he said. “There are thousands of us out here in the public that absolutely appreciate what you do.”

The reporter can be reached at mmcmanimon@azdailysun.com or 556-2261.
0 comments

8:45 p.m. update: The following email was sent to Museum Flood Area residents Tuesday evening and put out as a press release: Coconino County …

No fireworks, but in-person Fourth of July celebrations in store for Flagstaff

The coronavirus may have canceled in-person festivities for more than a year, but colorful Fourth of July celebrations are back on for 2021 (e…

Through the Rebound Project, the Arizona Public Service and the Phoenix Suns teamed up to renovate the Sunnyside park’s basketball courts with new concrete and fresh paint. The project also brings Flagstaff’s first dedicated pickleball courts to the public.

Tourists looking to take a scenic gondola ride to the top of the San Francisco Peaks are going to have to wait.

Flagstaff Police Department Deputy Chief Dan Musselman, left, presents the Officer of the Year Award to Detective Todd Martinet, right, at the Exchange Club of Flagstaff's 2016 Law Enforcement and Firefighter of the Year Awards Oct. 19. For more photos, visit this story on azdailysun.com.