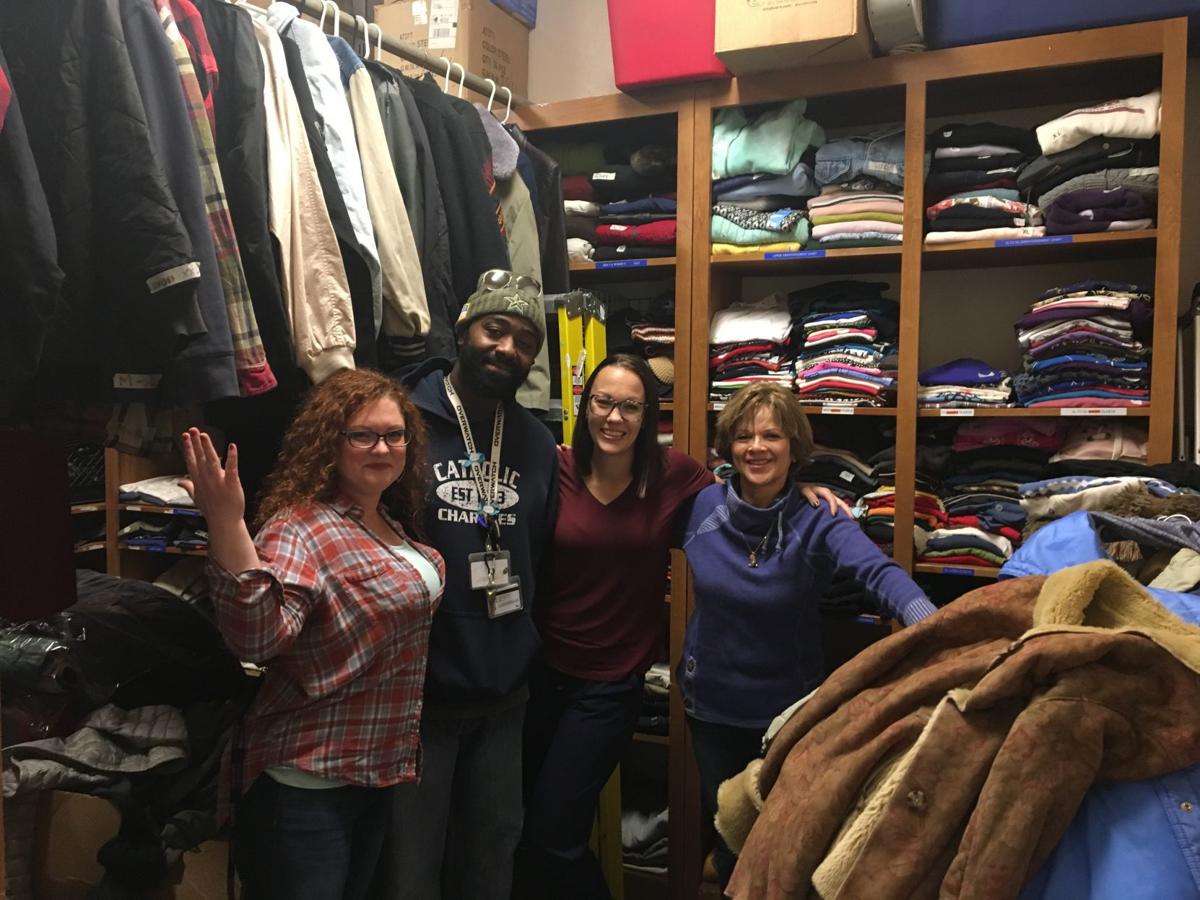 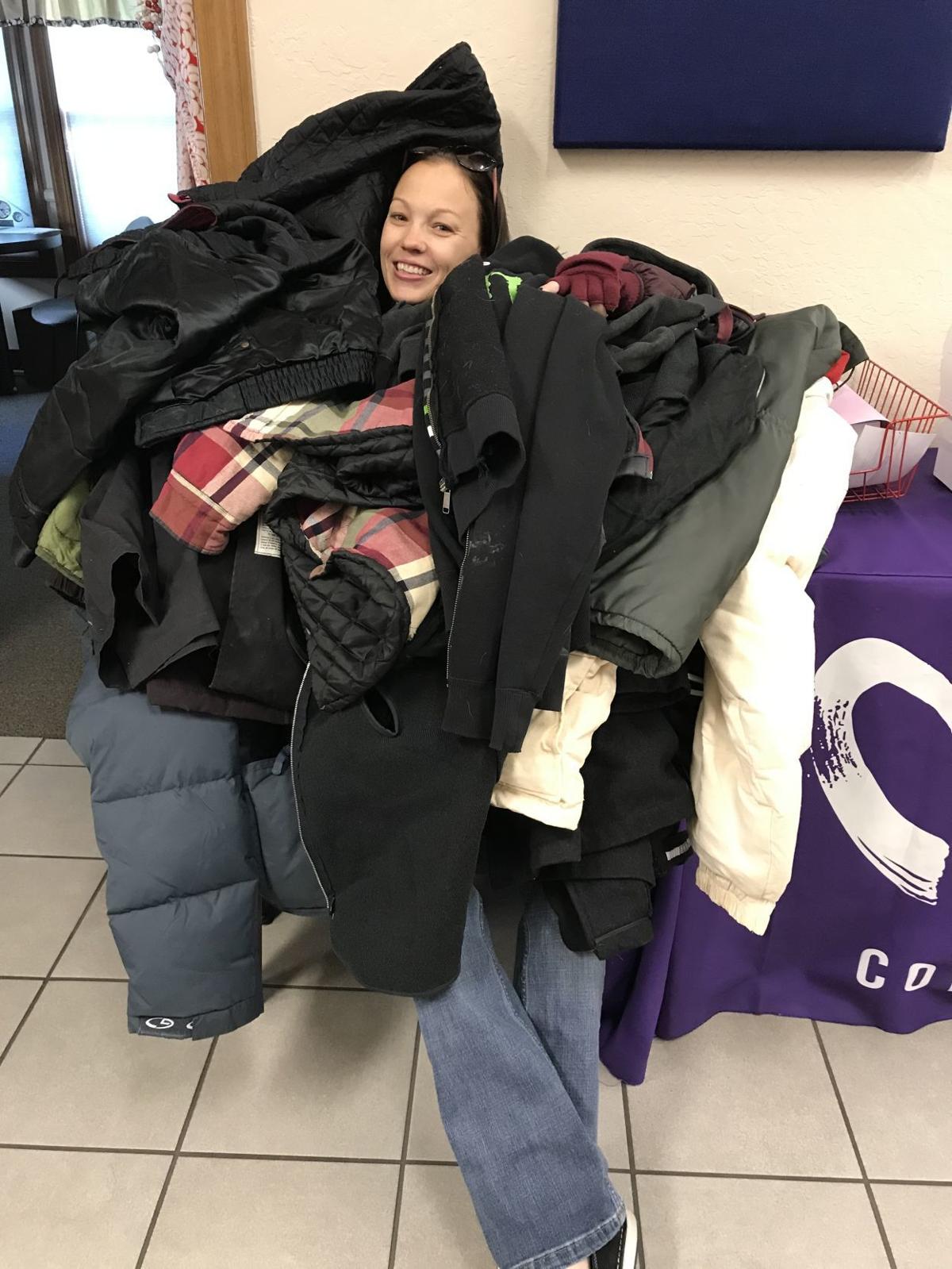 Mary Lawson, Office Manager of Flagstaff's Catholic Charities, is covered in coats donated by community members to give to individuals experiencing homelessness.

There were 10 people in line outside the door to Catholic Charities in Sunnyside on Wednesday, Oct. 30 by the time Office Manager Mary Lawson arrived at 8:30 a.m.

It was 20 degrees out and they needed to get warm. One man’s hands had turned purple.

But the unexpected drop in temperature caught the nonprofit unprepared. It would be at least a few weeks until its annual coat drive at San Francisco de Asis Catholic Church. There were only eight coats left from last year’s drive and about 20 men’s t-shirts. There were no hats and no gloves.

“I had some scarves that I was giving people to wrap around their head like a beanie and we were giving socks out as gloves, but I had nothing warm. Those eight coats were it,” Lawson said.

To make matters worse, the Catholic Charities team had been told their annual donation of emergency blankets from an external organization was not going to happen this year.

So Lawson took to social media.

“Such a cold morning here in Flagstaff!” she wrote on Facebook’s Flagstaff Buy, Barter, Sell and Services page shortly after arriving that morning. “If you are starting to dig out your winter gear and have extra coats, gloves or beanies, please think of Catholic Charities! We have lots of cold people in our lobby this morning and not enough winter gear to go around.”

Half an hour later, the first box arrived -- and the donations have not stopped since.

Many locals cleaned out their closets to find unused garments. Others took it a step further.

One woman held a blanket drive in her neighborhood, posting signs on Halloween for trick-or-treaters and their families to see.

A Williams resident brought in beanies and scarves knitted by her 83-year-old mother, who is already working to make more.

Dan Duke ordered 48 beanies from Amazon and shipped them in two days.

“Born and raised in Flagstaff, I love my community,” Lawson said. “I knew we were going to get some stuff, but I did not expect the amount of stuff and that it just keeps coming and that’s what’s amazing.”

Carly Banks also utilized the power of social media on behalf of Catholic Charities with her birthday fundraiser.

Shortly after logging into Facebook that day, she saw Lawson’s post and decided to begin a public fundraiser to make emergency kits for people experiencing homelessness.

“It just seemed like really great timing,” Banks said. “I hoped to keep things close to home and help people in our community. Especially this time of year, when it gets so cold, it’s just really important to think of the people who don’t have the luxuries we have.”

Her original goal was to raise $200 to make about 20 kits, each comprised of a blanket, energy bars, hand warmer, beanie, and neck wrap or scarf. In the roughly five days her fundraiser was active on Facebook, though, she raised $1,320 in online and direct monetary donations, plus additional items people contributed for the kits.

“The fundraiser started getting shared even by people I didn’t know,” Banks said. “It was really cool to see the Flagstaff community come together to help with that.”

In a matter of days, the community had donated about 60 jackets and sweatshirts, 100 hats and six blankets to Catholic Charities. A week later, the donations closet shelves were full of clothes, neatly folded and organized by type, with additional boxes of coats and winter gear piled high, ready to be sorted.

Lawson said these donations probably won’t last more than a month, though.

Every week, Catholic Charities gives out 80 pairs of socks and 60 hygiene kits, and not just to members of the church.

“It’s just a name,” Lawson said. “We’re here to serve everybody. We don’t turn people away.”

In addition to providing donated materials to people in need of them, Catholic Charities also provides foster care, adoption, veterans and in-home services, among others. It offers temporary housing in its family shelters and reentry facilities. Each winter, on nights when the temperatures are predicted to drop below freezing, the nonprofit’s PATH (Projects for Assistance in Transition from Homelessness) program allocates volunteers to find people sleeping outdoors and place them in a motel or a faith-based organization for the night.

“People are not aware of what we do or who we are,” Lawson said. “That post not only brought donations in, but it brought awareness to people that we are here. And if we can’t help you, we will find somebody who can.”

Caught in the storm: Tackling homelessness in record snowfall

Over the course of February's record-breaking storm and the three days that preceded it, 41 people found themselves outdoors and without shelter.

By 2 a.m. Wednesday, the temperature had slipped to a frigid 6 degrees in Flagstaff. On that night, Jamie Cly and Avery Gonnie, the man she ca…

Affordable housing is an issue that has held center stage in local political dialogue for several years, and with Christmas comes a renewed fo…

Flagstaff nonprofits prepare for the holidays

By the end of September, over 77 additional unsheltered individuals could find temporary refuge in northern Arizona’s largest emergency shelter.

What has become known as “The Jesus House” is not a charity, but over the course of about a decade, the modest home just off North Steves Boul…

Painted wooden stars, the kind found at any craft store, may be simple, but for people like Flagstaff’s Julie Swann-Paez, their value is immea…

Organization of the year: Catholic Charities: A dedication to dignity

Sandi Flores’ favorite word is dignity. It hangs above her office door, in bold script, and if you ask her about Catholic Charities, where she…

Mary Lawson, Office Manager of Flagstaff's Catholic Charities, is covered in coats donated by community members to give to individuals experiencing homelessness.