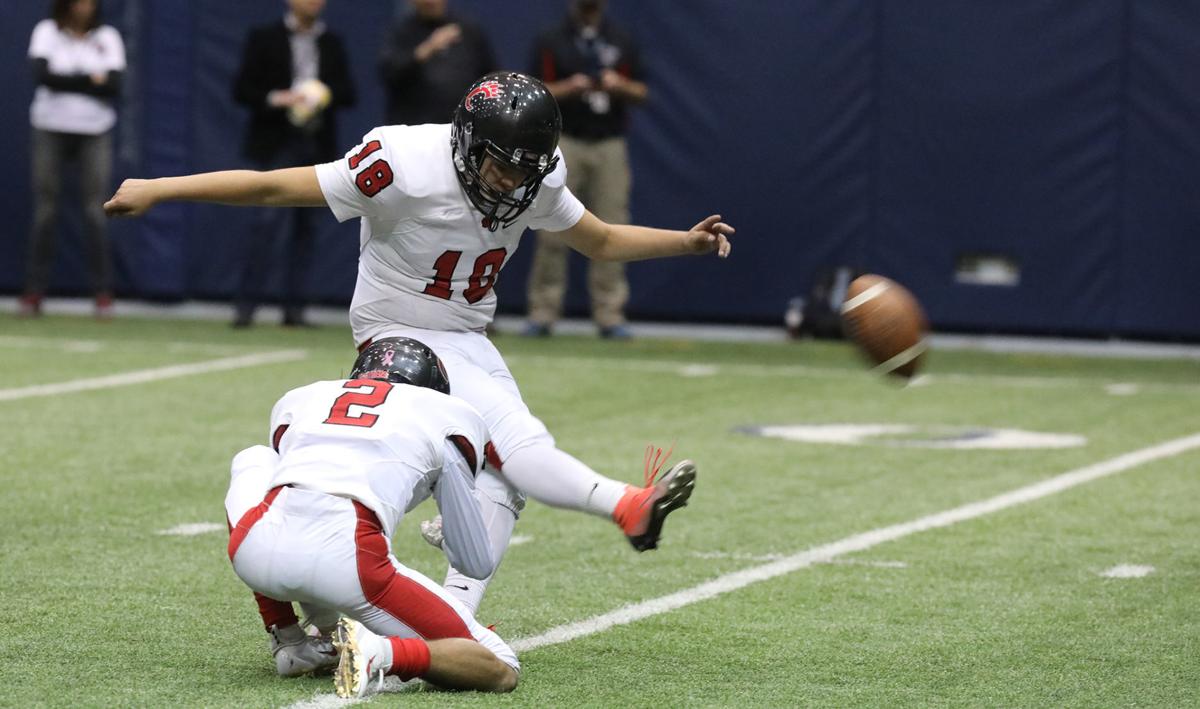 When Coconino learned it would be playing host for the first round of the 4A Conference state championship tournament, Panthers first-year head coach Mike Lapsley said his football team was ready to "accomplish something."

That was on Saturday, when the brackets were released.

It didn't take long for the team to put aside the fact that it made the playoffs for the first time since the 2005.

Beforehand, the Panthers also celebrated winning the Grand Canyon Region and relished defeating crosstown rival Flagstaff for a third straight season, but quickly set their sights on the next goal at hand.

Now it's on to the postseason, and for the first time ever, the Panthers will host a playoff game in Cromer Stadium, a venue known statewide as a great place to play football.

Eighth-seeded Coconino takes on a No. 9-seeded Gila Ridge team just as hungry for a chance to prove something about its program, as both teams have had their share of struggles over the last few seasons.

Lapsley said both teams are already over the hump and are now looking to see if they "can win a big game like this" on Friday.

The Panthers hadn't recorded a winning season since 2012 before turning things around a year ago when the team just barely missed the postseason cut. They continued to build off 2018's progress, setting themselves up to win a playoff game this year for the first time since 2000.

It will be the first time Coconino faces off against Gila Ridge, a team based out of Yuma.

At "home" the Panthers are 3-3 in program history for the playoffs, entering Friday with an overall postseason mark of 7-16.

Meanwhile, Gila Ridge is in the state tourney bracket for the first time since 2011.

The Hawks went 1-9 in 2016 and then 3-7 the next season before turning things around as well in 2018. They won the Southwest Region for a postseason spot this year at 4-0 and finished the regular season at 9-1, the same overall mark Coconino holds.

While the Panthers are coming off a big bounce-back victory against crosstown rival Flagstaff, the Hawks dropped their regular-season finale 22-19 to Cibola.

The Hawks registered just 36 yards rushing last week and have totaled 1,477 for the season, a number that Panthers lead rusher Zach Bennett has beat himself as he sits at 1,650. Hawks quarterback Kaleb Cota has done the bulk of the work for the offense, tallying 1,300 passing yards to go with 16 passing touchdowns.

But Cota went 0 for 2 last week in the loss. Still, Lapsley said his team is not underestimating anyone and that the Hawks "certainly have guys who are playmakers."

One of the biggest takeaways Coconino got from the regular season was how important it is for the team to limit mistakes.

“If we continue to play our game, which is to limit turnovers and keep penalty yards to a minimum and control the clock, and do the things we do, there is no doubt we can compete with anyone,” Lapsley said.

The Panthers' lines have also been a force this season, growing with each outing.

“I think they love the challenge and they love to grind at it, if you will. Be physical each and every snap," Lapsley said. "They’ve done a great job all year long and I think they just get better week to week."

Here are a few more things to note as Coconino hosts Gila Ridge 7 p.m. on Friday:

A BILL OF HEALTH

Coconino saw the return of kicker Jesus Trejo last week, and what a role he played in the win over the Eagles, kicking two field goals in the 13-7 victory.

The Panthers also expect the return of sophomore linebacker Jonathan Jaramillo, who is second on the team in total tackles at 49 to Manuel Cardoza's 89.

Coconino scored 391 points by the end of the regular season, a new program high. The Panthers have allowed only 153 points this season. In 2000, with the help of two postseason games, the team finished the year with 391 total points.

Bennett made the Grand Canyon Region's first team along with teammates Riley Darnell, Cardoza, and Andy Ruiz, and the junior back was named the region's offensive player of the year.

Lapsley was named the region coach of the year.