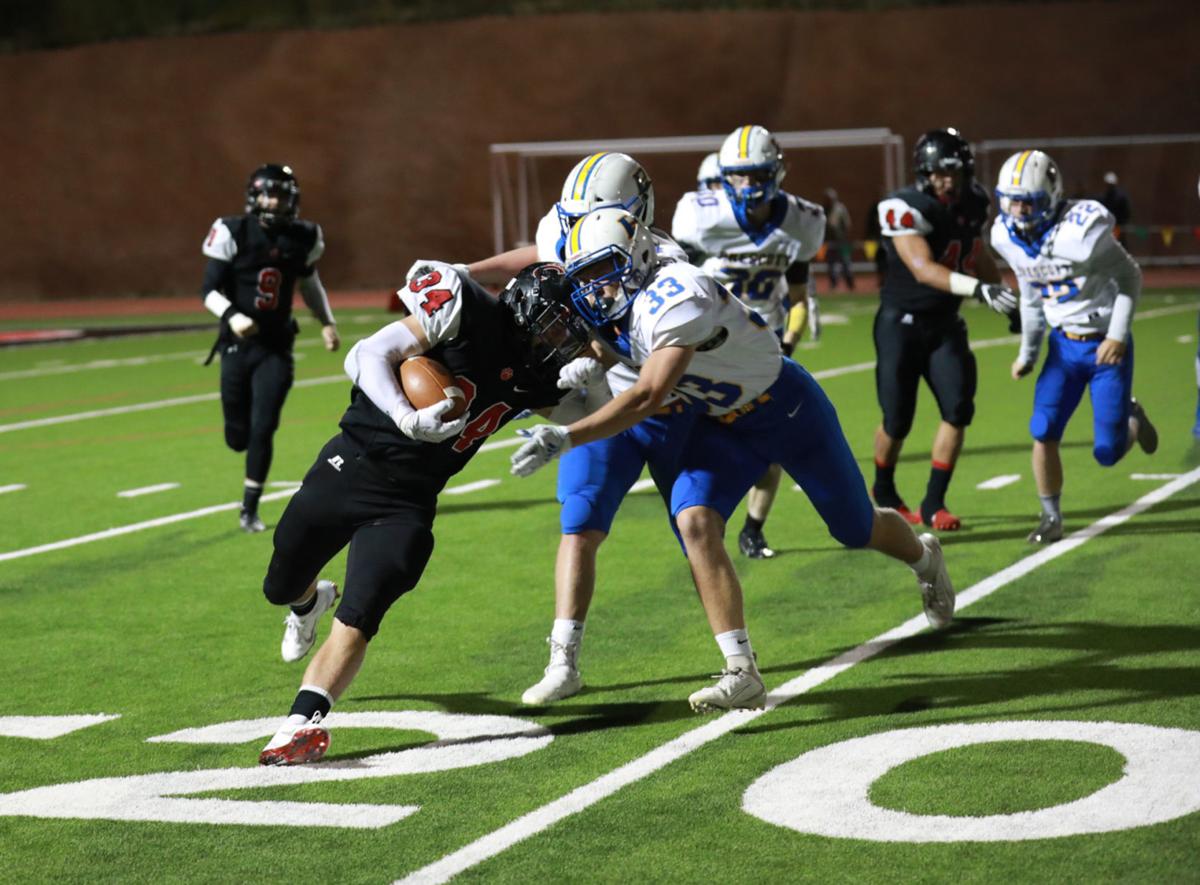 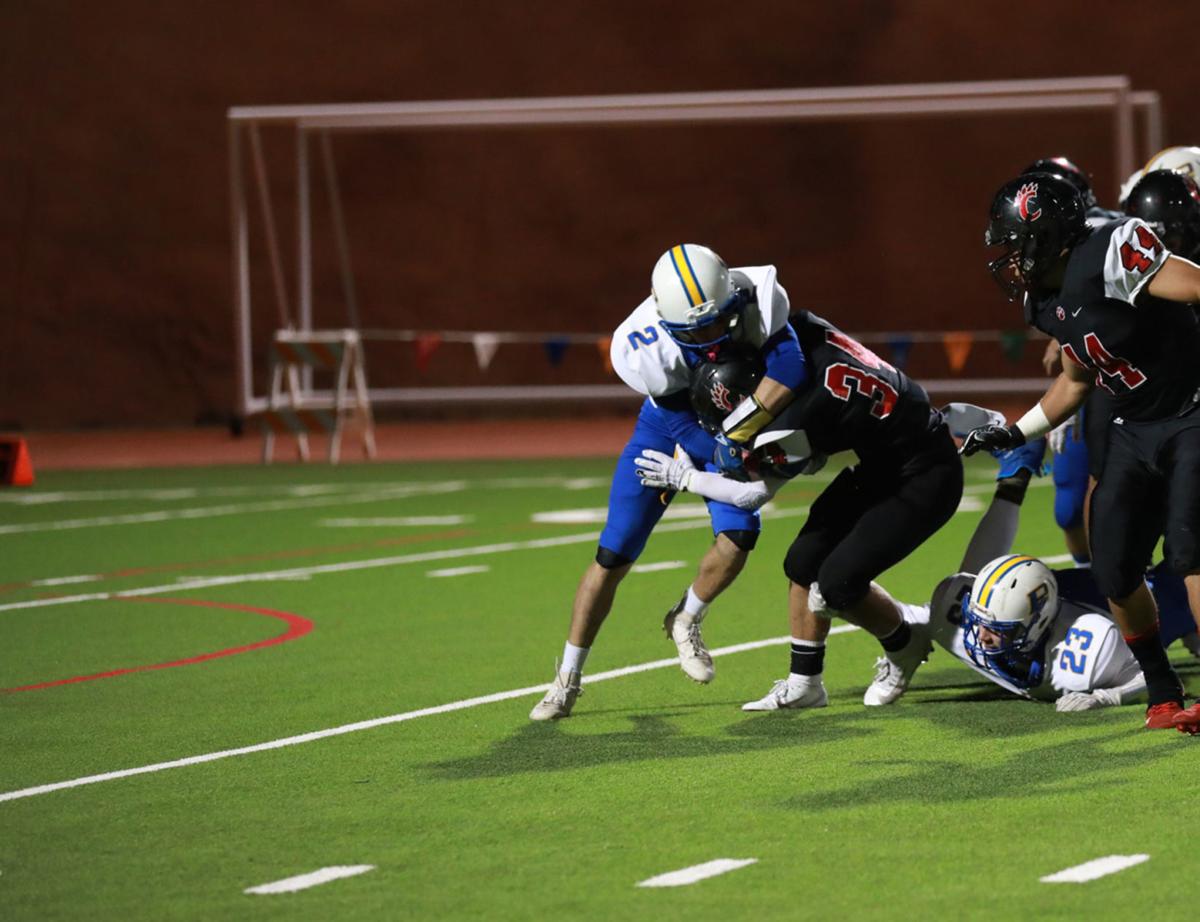 Coconino’s Zach Bennett is taken down by a Prescott defender Friday evening at Coconino High School. 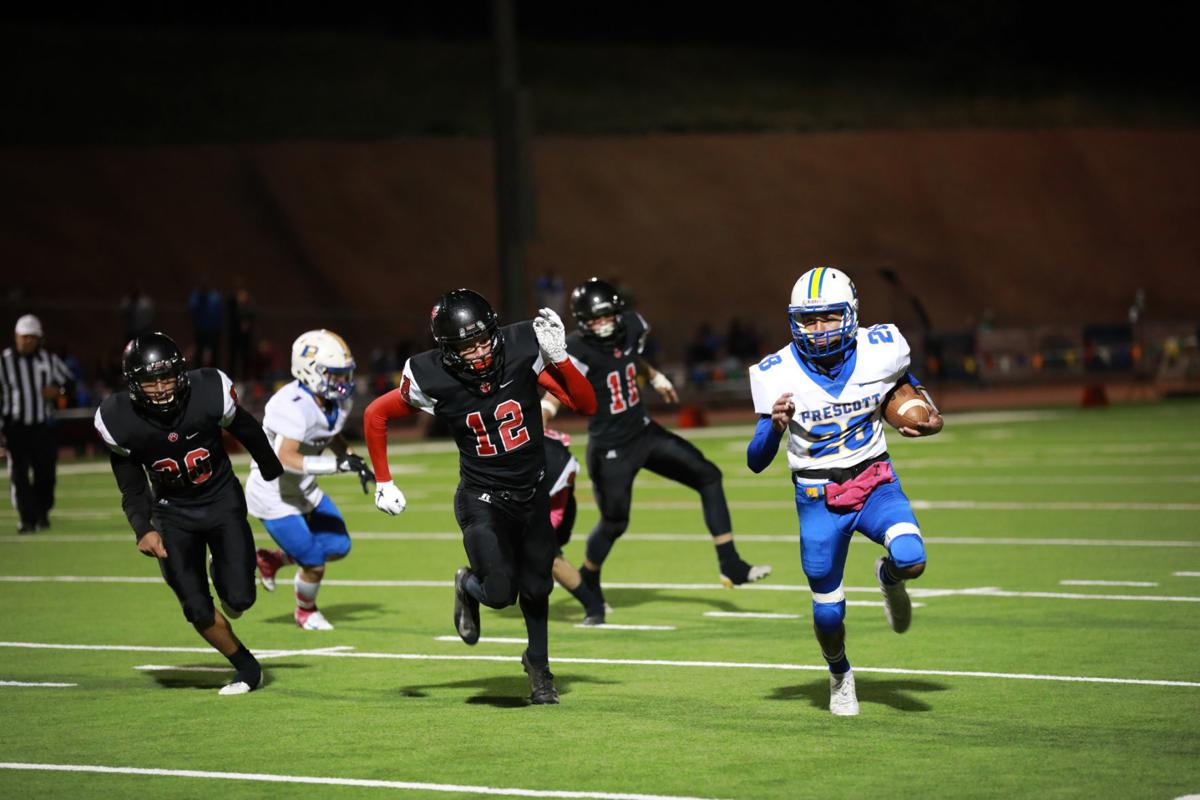 A swarm of Coconino defenders chase a Prescott player Friday during a game at Coconino High School.

Coconino’s Zach Bennett is taken down by a Prescott defender Friday evening at Coconino High School.

A swarm of Coconino defenders chase a Prescott player Friday during a game at Coconino High School.

As the fourth quarter started and the Coconino football team changed sides of the field with possession, first-year head coach Mike Lapsley threw his hands up while walking the sideline as if signaling that his team was on the rise for good Friday night.

Zach Bennett scored three rushing touchdowns to go with more than 150 yards on the ground, Joshua Monke ignited a rally with a defensive score and the Coconino Panthers turned on the switch in the second half to beat the Prescott Badgers in Cromer Stadium, remaining undefeated with the victory at home.

Down 20-7 coming out of halftime, Monke robbed a Prescott pitch play and ran it in for a touchdown to start an outburst of 27 unanswered points. No. 17-ranked Prescott was driving out of the locker room gates, but Monke took the steam out of the Badgers quickly in the meeting of Grand Canyon Region programs.

"It takes everyone, special teams, defense," Lapsley said. "They did great tonight. They allowed our offense to get clicking, and I am super proud of all those guys."

After Prescott (3-3, 1-1) missed a field goal on its second drive of the second half, 13th-ranked 4A Conference Coconino (6-0, 3-0) started grinding away on the ground and taking time off the clock on the way to tying the game at 20-all on a Beau Gomez 1-yard TD run on third down.

Turnovers hurt the Panthers in the first half, but they capitalized on them in the second. Monke ended his night with two interceptions, and Malcolm Morris picked off Badgers quarterback Dellinger Boyd late in third quarter, with the offense using the turnover to take a 27-20 lead -- the first of the night.

"That set the tone. Monke, man, he's a great athlete and a good role model and that set the tone right there," Panthers quarterback Jordan Lucero said. "That made us step up our game."

Bennett found his way into the end zone for the second time of the game not long after the Morris steal, crossing the line untouched from five yards out and giving Coconino a lead it would not relinquish on the way to beating Prescott for the first time since 2005.

"Our line stepped up tremendously," Lucero said of the second-half resurgence. "They struggled in the first half, but tremendous job of them to give us opportunities to run the ball, throw it. I give the credit all to them."

Prescott fumbled on its fourth possession of the second half and Coconino went to the ground again. Bennett scored from inches out on fourth down, and the Panthers had some insurance on a 34-20 lead with 3:23 left to play.

In the first half, Coconino was the team dealing with costly mistakes, as Prescott scored off a Panthers fumble, interception and turnover on downs to take control entering the break.

"We recognized some things they were doing. It took a little longer than we had anticipated, but at the end of the day we told them to man up. This is a battle and we have to win it," Lapsley said. "We made adjustments and the kids responded to them with a good attitude."

It was all new territory for a Panthers team that never trailed in a game this season prior to Friday and averaged more than 20 points in the first quarter to start the season. In fact, until Friday Coconino had scored on all of its opening possessions of 2019.

After starting the game with two punts and two turnovers, Coconino got on the board with a Bennett TD with 6:45 to go in the second quarter.

"We will have fun tonight and get back to work tomorrow," Lapsley said.