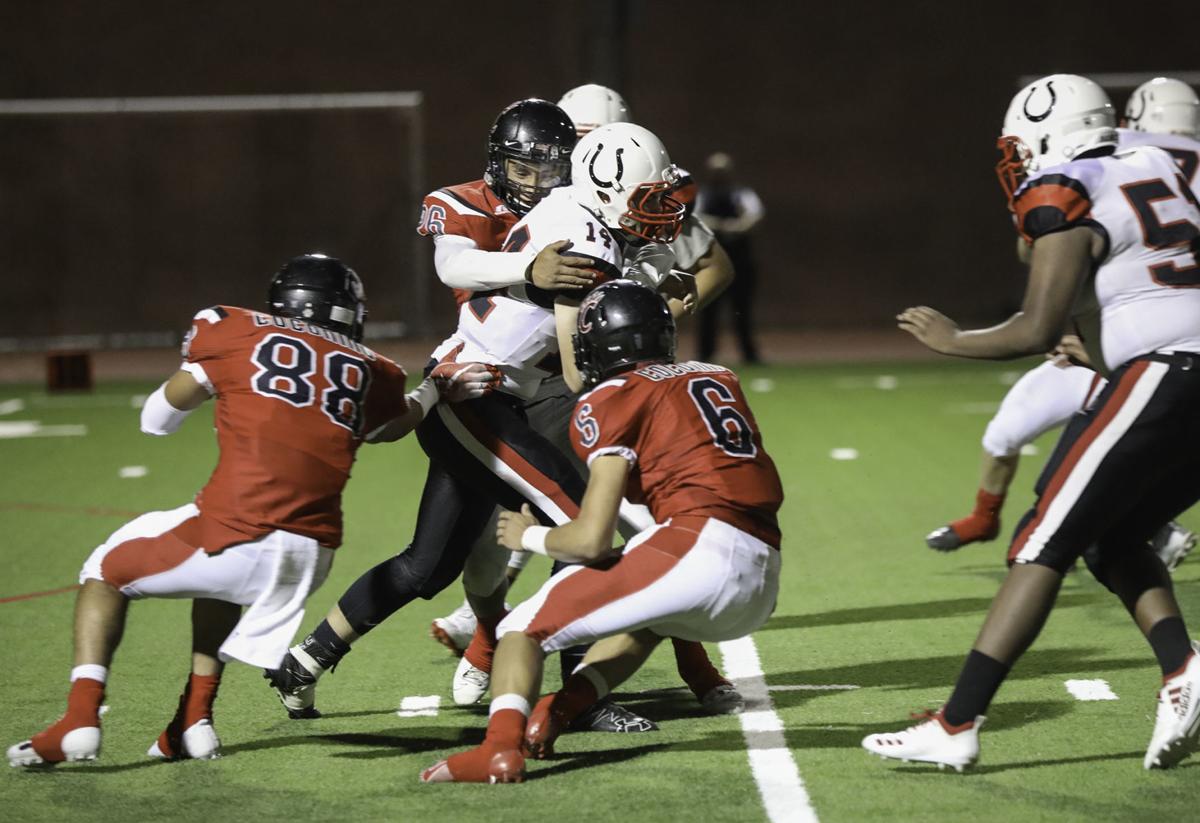 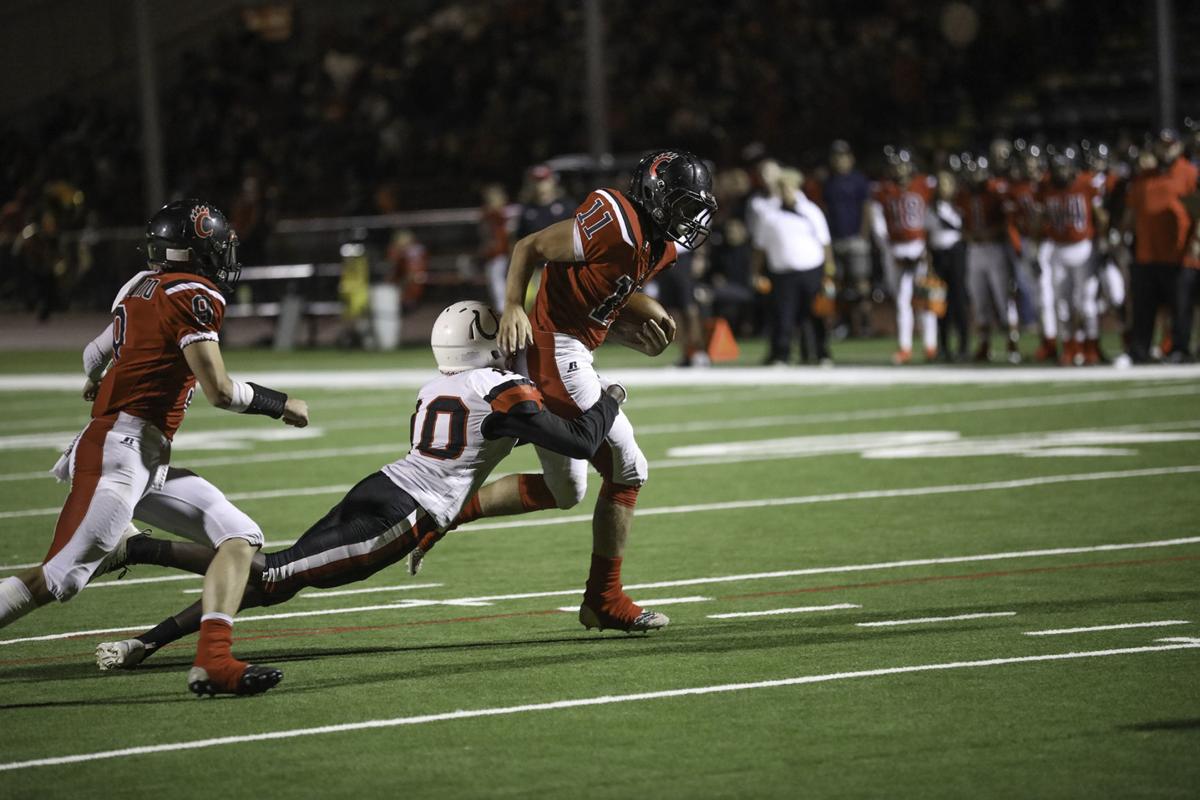 Coconino’s Beau Gomez (11) breaks through the grasp of a Cortez defender Friday evening at Cromer Stadium. 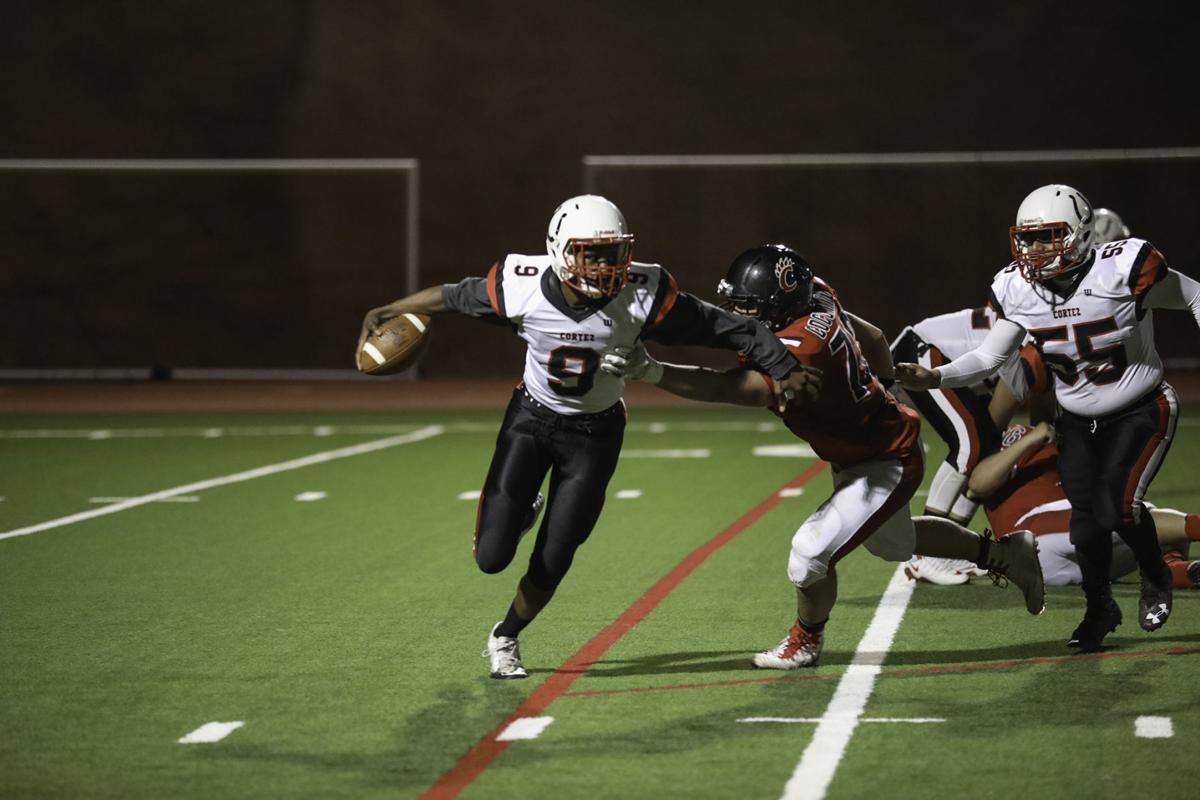 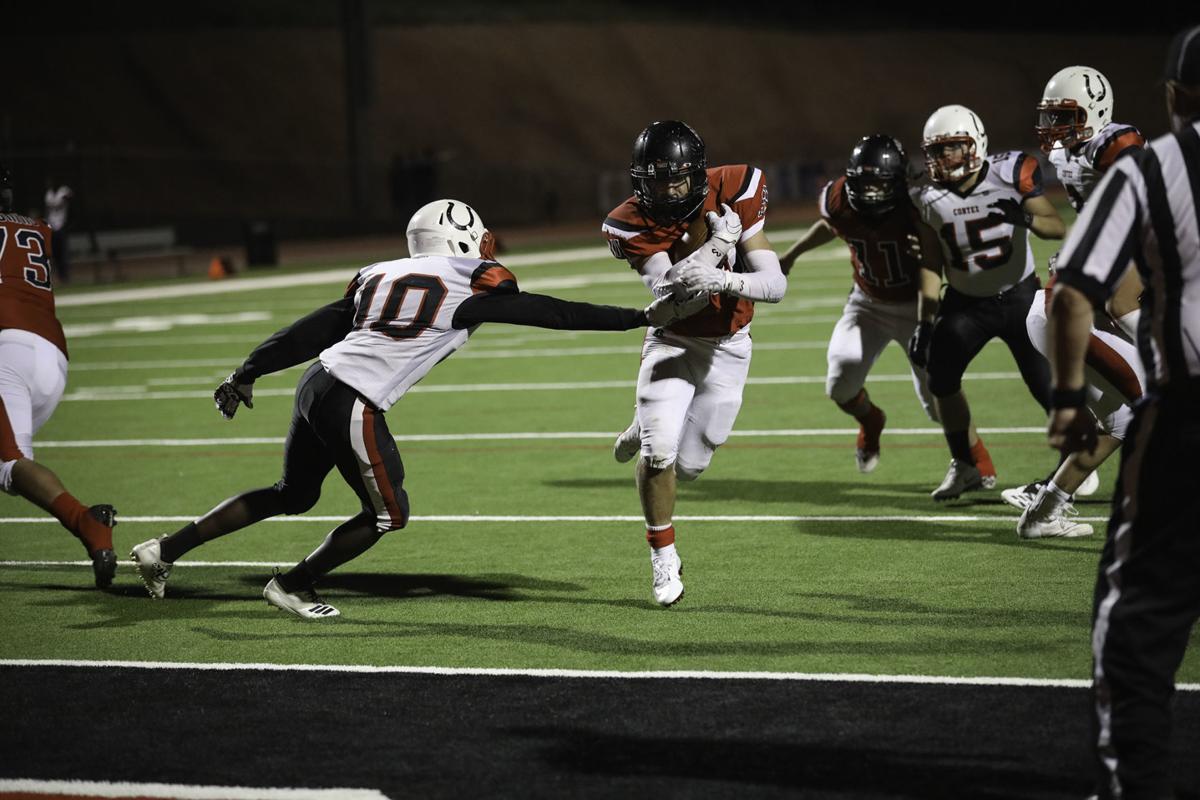 With Friday's 77-12 home victory, the Coconino Panthers have opened back-to-back seasons with a 3-0 record for the first time since putting together three straight seasons of 3-0 starts from 1974-76.

Not bad for a team that before last year suffered five consecutive losing seasons.

Zach Bennett recorded a career-high five rushing touchdowns, four different Coconino players made trips into the end zone and the Panthers trounced the Cortez Colts in Cromer Stadium, scoring in all phases of the game to set a new program high of total points scored in a single game.

"It was a good victory, but going into region, we are going to face a lot better teams, so we will be working on more on fundamentals and whatnot so we can win those region games," Bennett said.

The now 0-3 Colts, who have now lost 30 straight football games dating back to Sept. 16, 2016, managed their way into Coconino territory just once during the first half, which ended with the host holding a 56-0 advantage in the meeting of the 4A Conference programs. Coconino entered Friday with a 4-4-1 record against the Phoenix-based school.

"We have to continue to do it," said first-year head coach Mike Lapsley, whose team was able to open up the playbook during the rout. "Relying on your offense every week can be difficult, so having the special teams plays, the defensive plays, it really takes the pressure off the offense."

Jonathan Jaramillo provided Coconino a defensive touchdown with a pick-6 in the third quarter that made it 70-0 with 7:28 on the clock. Teammate Eli Deherrera returned a kickoff for 63 yards to end Coconino's scoring for the night, immediately answering the first TD of the game from the Colts.

But in the first half, it was all Bennett, who needed just 72 rushing yards to do his damage on the scoreboard. The junior running back scored his fourth rushing touchdown of the night from five yards out in the second quarter, surpassing his previous single-game career-high with the play.

Bennett's first touch of the game was for a 3-yard trip across the goal line, and it came off a forced fumble on the first Cortez snap of the game. He added two receiving touchdowns to Friday's list, both from quarterback Jordan Lucero, who finished 4-for-4 passing with 123 yards.

The giant victory and the new milestone had not yet quite set in for Lapsley right after the game.

"You know, I think we are doing some good things," he said. "I think that as a whole, when we come together as a team, we feel that momentum of what we are capable of doing. And I think tonight that 77 kinda is proof of that."

Coconino opened up the playbook for a second straight week and Lucero made the best of it. The senior QB connected with Matias Ortiz for a 32-yard pass and early in the game found Bailey McCauslin for a 20-yard completion.

McCauslin had as many rushing touchdowns Friday as he did in the entire 2018 season, setting a new career high as well in the category against the Colts -- who were held to 102 yards of offense, lost three fumbles and were 2 for 8 on third-down conversions.

The Colts, however, found their way onto the scoreboard for the first time this season in Friday's loss.

"I thought we did a better job of executing overall than we did last week," Lapsley said.

Coconino is in Cottonwood next week to take on Grand Canyon Region opponent Mingus Union at 7 p.m.

Coconino’s Beau Gomez (11) breaks through the grasp of a Cortez defender Friday evening at Cromer Stadium.