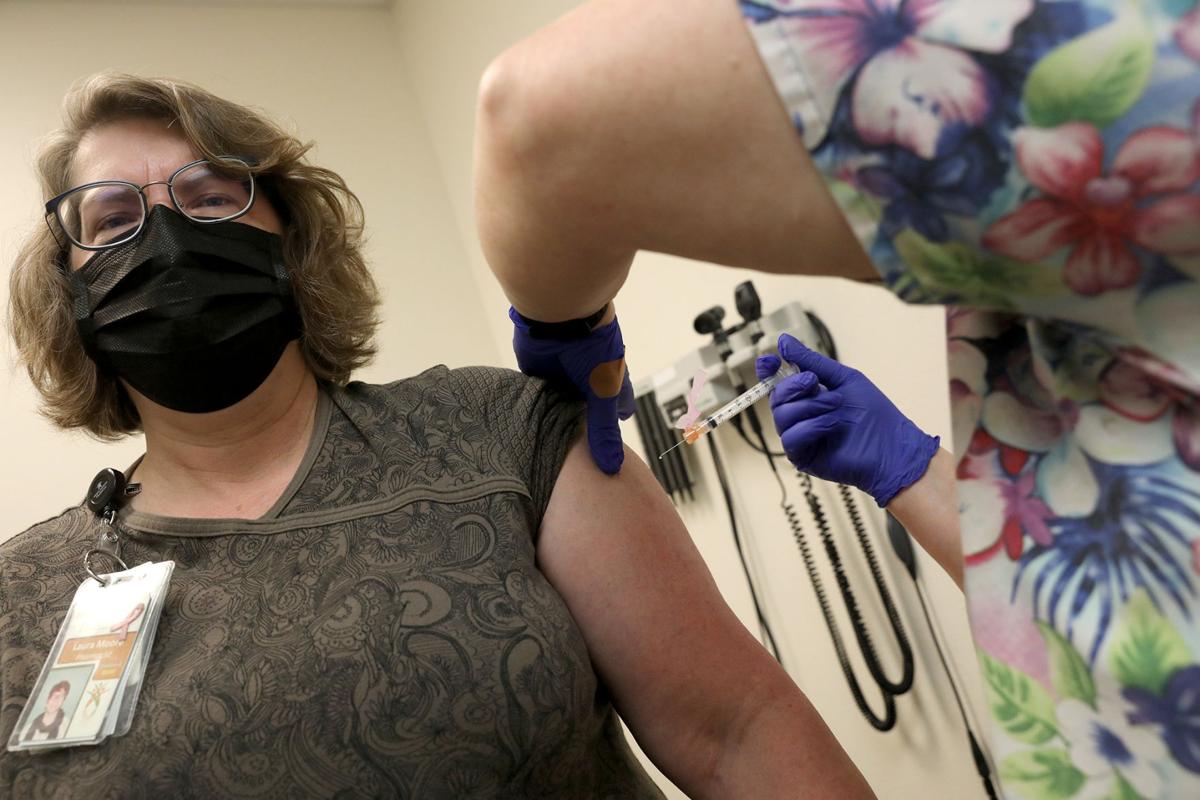 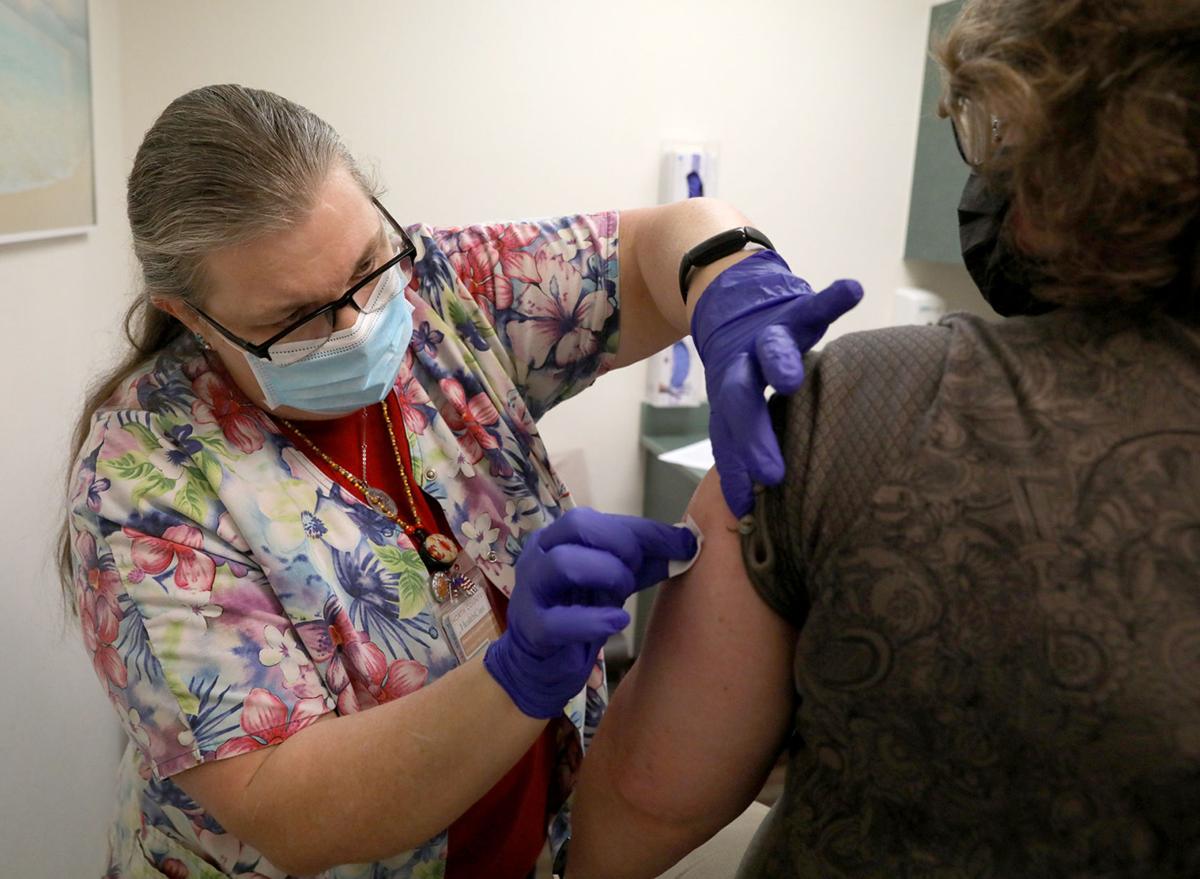 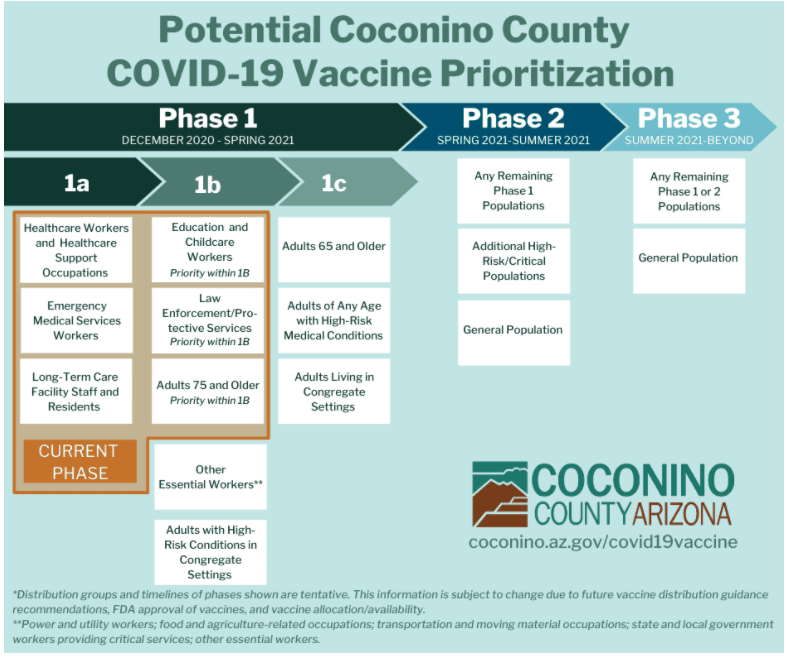 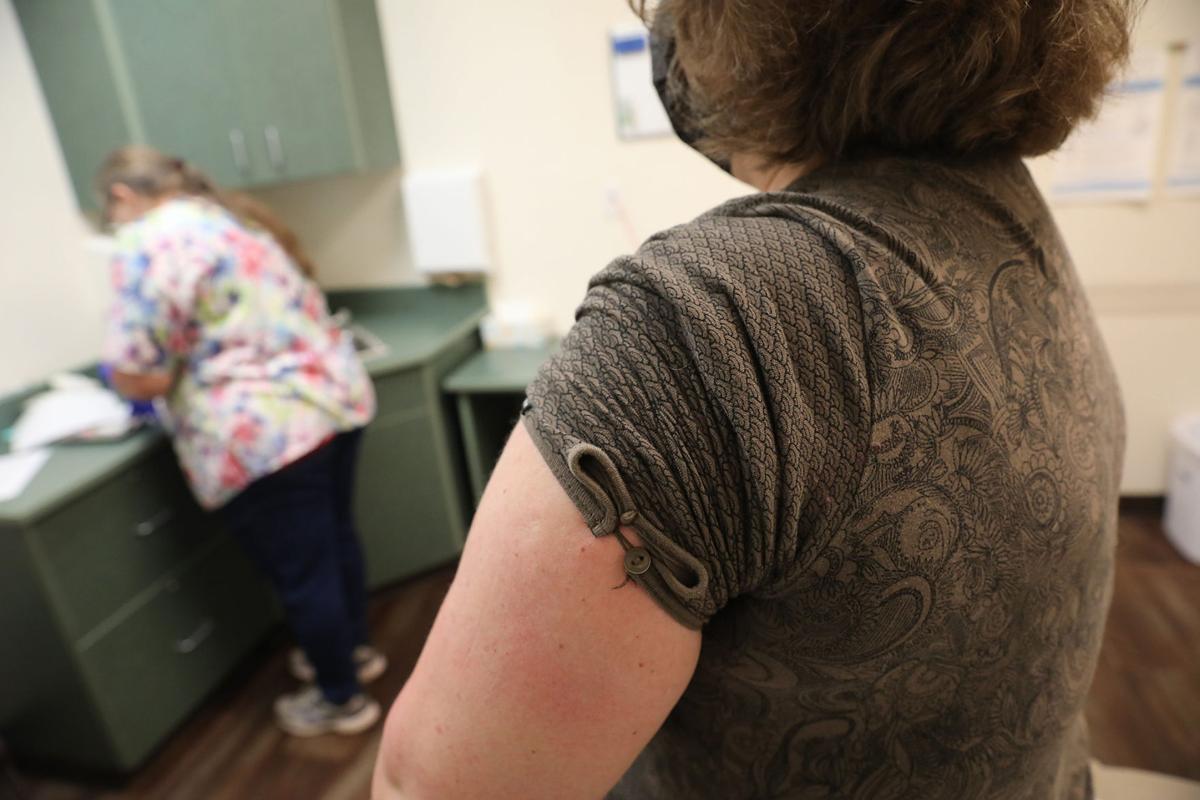 Next week Coconino County Health and Human Services and its partners will begin offering vaccinations to education workers, law enforcement personnel and those aged 75 or older.

As of Thursday, Coconino County has received 7,275 doses of COVID-19 vaccines, including both the Pfizer and Moderna versions, and 3,148 have been administered, said Sarah Schildecker, CCHHS division manager.

CCHHS staff began vaccinating individuals at Fort Tuthill County Park on Monday, where the site was fully booked throughout the day with individuals in the “Phase 1a” group, including health care workers, emergency medical service workers and long-term care facility staff and residents.

Schildecker said next week, the county will use some of its remaining vaccines allocated for Phase 1a to begin vaccinating only select members of the “Phase 1b” group: education and child care workers, law enforcement and protective services and those aged 75 or older. The education group includes all school and higher education staff who interact with other staff and students, bus drivers, cafeteria workers and facilities staff, while law enforcement includes corrections and other emergency response staff.

The rest of Phase 1b, including adults with high-risk conditions in congregate settings and other essential workers, will not be eligible until Coconino County receives its order of vaccines designated for that group. Those in Phase 1a can continue to receive vaccinations.

“This is basically extra vaccine that we have that we want to get those highest risk within 1b,” Schildecker said.

Fort Tuthill is not yet open to the general public for vaccinations, though COVID-19 testing remains available. For both the 1a and 1b groups being vaccinated, appointments and proof of occupation are required. Schildecker said this can be a badge, pay stub or letter from an employer. Individuals unsure of which vaccine group they fall into can contact Coconino County.

The effort to begin vaccinating the Phase 1b group, like the overall local vaccination initiative, will be distributed between CCHHS and other partners. It currently has three: Northern Arizona Healthcare, North Country HealthCare and Banner Health Page Hospital.

In Flagstaff, CVS and Walgreens are also vaccinating long-term care facility residents and staff, but instead of receiving allocations through Coconino County, they are operating directly through a Centers for Disease Control and Prevention (CDC) program.

North Country HealthCare began its vaccination efforts in Flagstaff late last week, one week after Northern Arizona Healthcare began vaccinations at Flagstaff Medical Center and Verde Valley Medical Center using the Moderna vaccine. At both health care organizations, vaccinations are optional for employees and information sessions are being held for those who said they were uncertain about receiving the two-dose vaccination.

North Country, which has 13 locations throughout northern Arizona, is currently distributing the Moderna vaccine, which is easier to store than the Pfizer vaccine, at those locations with enough staffing to do so, including the Fourth Street clinic in Flagstaff and clinics in Kingman, Lake Havasu City, Show Low and Holbrook and soon in Winslow and Payson.

Dr. April Alvarez-Corona, North Country’s Chief Medical Officer, who is overseeing the vaccination process, said the clinics received their first doses of the vaccine at different times based on the counties where they are located.

The Flagstaff clinic received an initial 300 doses that were distributed to the first 140 employees on Dec. 30 and 31, a few days after it received the vaccine. The clinic has approximately 510 total employees. An additional 20 to 30% of staff were scheduled to be vaccinated this week, in addition to other qualifying community members.

“On the first day, we had the clinic closed and we had just the COVID [vaccine] people coming in on our side. So we had every room filled with people getting their COVID shot,” said medical assistant Sharon Cooprider-Singer, who has vaccinated nearly 50 people since last week. “It was a very tiring day. I did more vaccines that day than I had all of last year, probably.”

As of Monday, more than 150 Phase 1a community members had signed up for vaccination appointments at North Country, which occur 10 at a time — the number of Moderna doses in a single vial — to prevent waste.

Once a vial is opened, staff have two hours at room temperature or six hours refrigerated to use all doses. The clinic’s current batch of unopened Moderna vaccines are viable until June, said Cooprider-Singer. These vaccines are locked in the clinic’s immunization room and doses are carefully recorded by vial in case recipients show any adverse effects.

Corona said North Country decided to hold the first vaccinations just before the holiday weekend so that employees would not need to report any lingering symptoms until Monday, though she said such symptoms are a good sign.

Various employees reported a soreness in their arm where they received their first dose.

Pharmacist Laura Moore received her vaccination Friday morning, a process that took only seconds to complete, plus an additional 15 minutes afterwards to be monitored for any adverse reactions. She said she has been eager to receive the vaccine and would have volunteered for the vaccine trials if they had been offered locally, even though she does not feel she is at the most risk of contracting the virus.

“I feel like I’m not in the high-risk group at all, except for being a heath care worker, which obviously puts me there. There’s probably people out there who are higher risk because of all the other practices of people around them, your core group. Our core group here is probably the safest of anywhere, so I don’t ever feel like I’m at risk when I’m at work, it’s when I go out because we’re so conscious of it here,” Moore said.

Like other medical practices nationwide, Corona said, decreases in staffing have been a concern for North Country, especially as vaccinations begin, so to make room for vaccination clinics while still seeing patients, the organization is primarily vaccinating its employees on Fridays, when many providers are either not working or doing telehealth. To prepare for the next phases of vaccination, the organization is looking to develop a system for training retired health care professionals who are willing to volunteer.

“When we know that we’re looking at mass vaccinating [members of] the general population that are going to want the vaccine, we’re talking about 50% of the population, that’s a lot of people, so to bring them on board now for two, three, six months down the road is going to be extremely helpful,” Corona said.

Individuals who fall into the Phases 1a and 1b vaccine prioritization groups are required to make an appointment for vaccination and provide proof of occupation. Individuals unsure of which vaccine group they fall into can email covidvaccination@coconino.az.gov.

There is no cost to receive the vaccine, though individuals are asked to bring their insurance card if they have it. No one will be turned away for lack of insurance.

All appointment slots through February at Coconino County Health and Human Services’s Fort Tuthill vaccination site are booked as of Monday, b…