Testing also doubled in the county this week, with a total of 12,033 tests conducted (the previous week’s total was 6,562). The positivity rate is nearly three times the high transmission threshold (10%), with 29.9% of tests returning positive results. The previous week’s yield was 25.2% 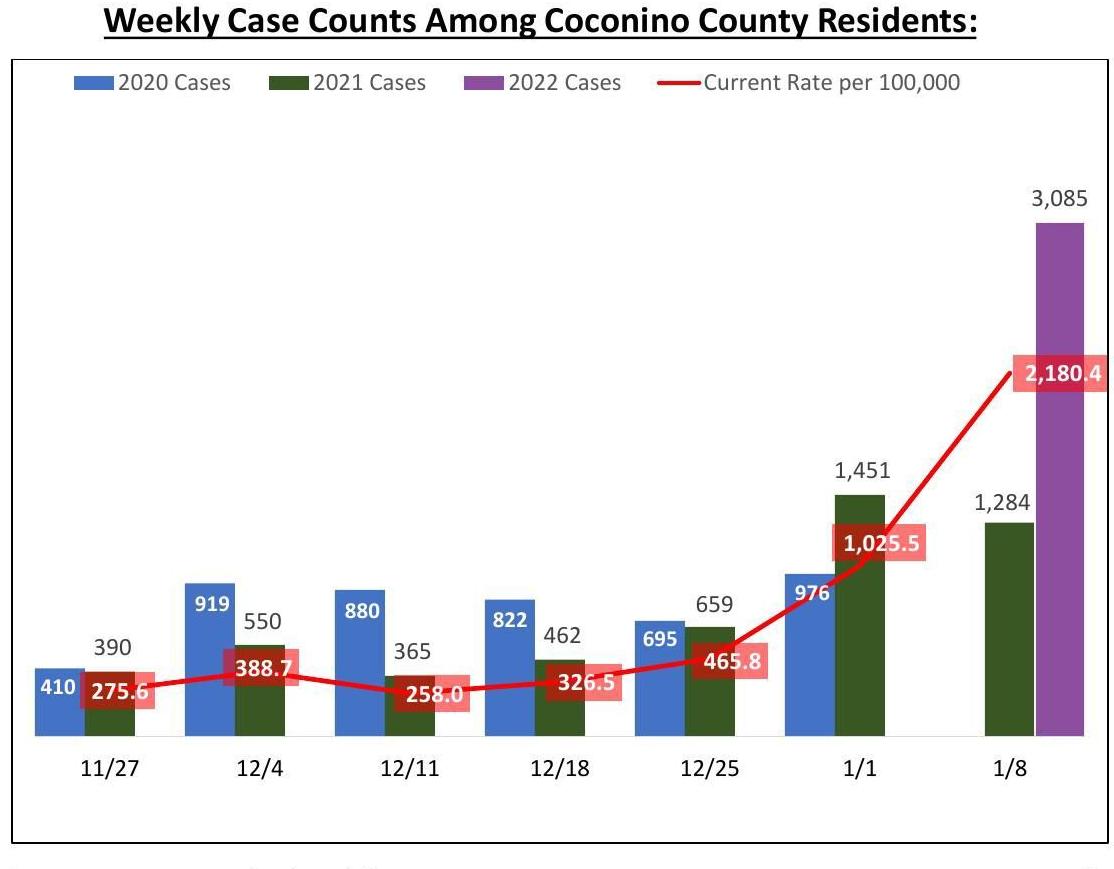 The incidence of COVID-like illness (CLI) continued to rise in county hospitals this week, rising to 19% from 14.9% the week before. A total of 37 patients were hospitalized with COVID, up from 21. COVID deaths among county residents have been falling, however, with only one reported for the week -- the previous week had four.

Across the county, 52.7% of the eligible population had been fully vaccinated as of Jan. 8, or 76,817 individuals. Of those, 36% have received a booster dose (27,648). Boosters continued to make up the majority of doses administered in the county this week.

After accounting for about half of county variants in December, omicron makes up well over 90% of variants identified in January so far. The dashboard data report lists 445 identified omicron cases as of Jan. 8.

This is also true across the state, with TGen’s COVID-19 sequencing dashboard reporting 1,594 in January so far, 96.78% of genomes sequenced. Coconino County has the second-highest omicron rate in the state after Maricopa County.

In addition to its monthly variant trends report, TGen’s dashboard has added an omicron tracker that measures the percentage of variants sequenced on a weekly basis. This tracker shows omicron growing in prevalence since its first appearance in Arizona the week ending Dec. 11, becoming the most common variant the week ending Jan. 1.

The variant’s percentage continues to grow, accounting for 95.68% of variants (753 genomes) statewide for the week ending Jan. 8. The state had reported a total of 2,394 omicron genomes as of Jan. 14.

Six cases were athletic-related, though the report noted this may be lower than the actual total as, “due to the high volume of cases, the FUSD COVID-19 Support Team was unable to identify all of the positive student cases that were also athletes.”

The district’s total of COVID cases for the school year to date is now 1,343.

It took a while for the conversation to turn productive during Thursday’s special city council Meeting. In its earliest minutes, the meeting a…