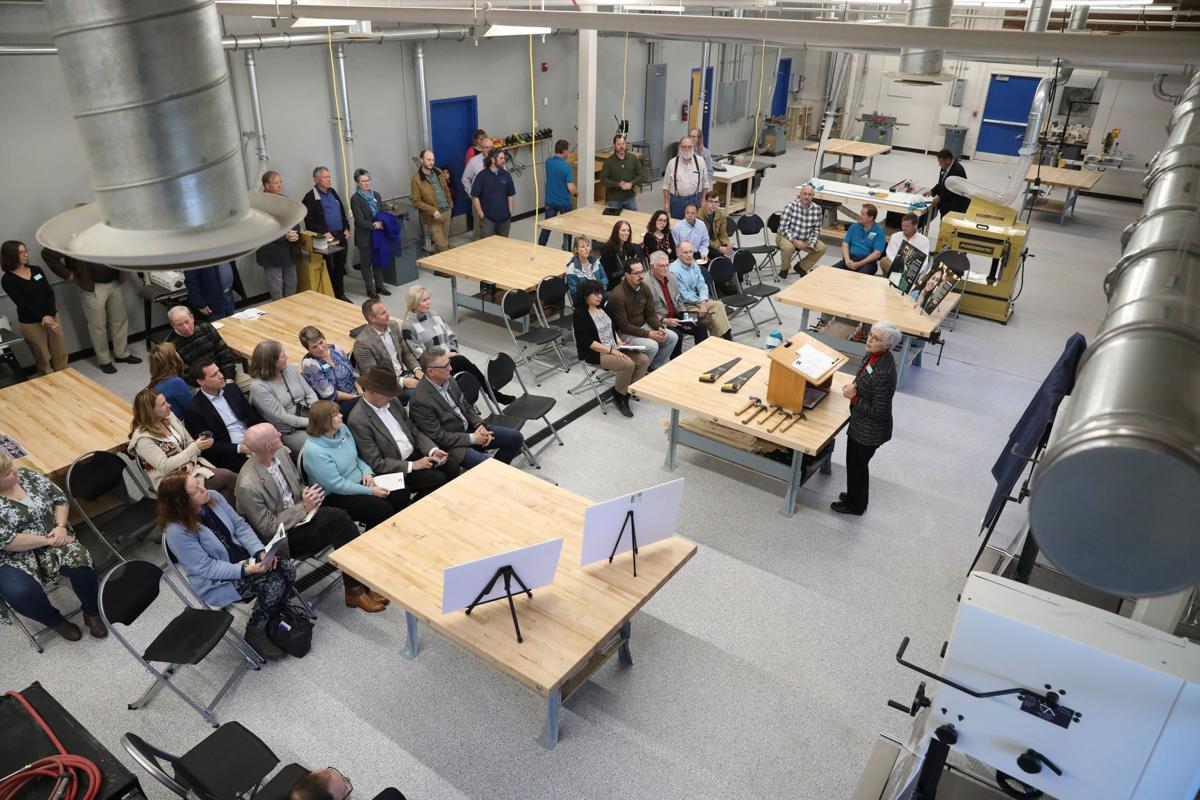 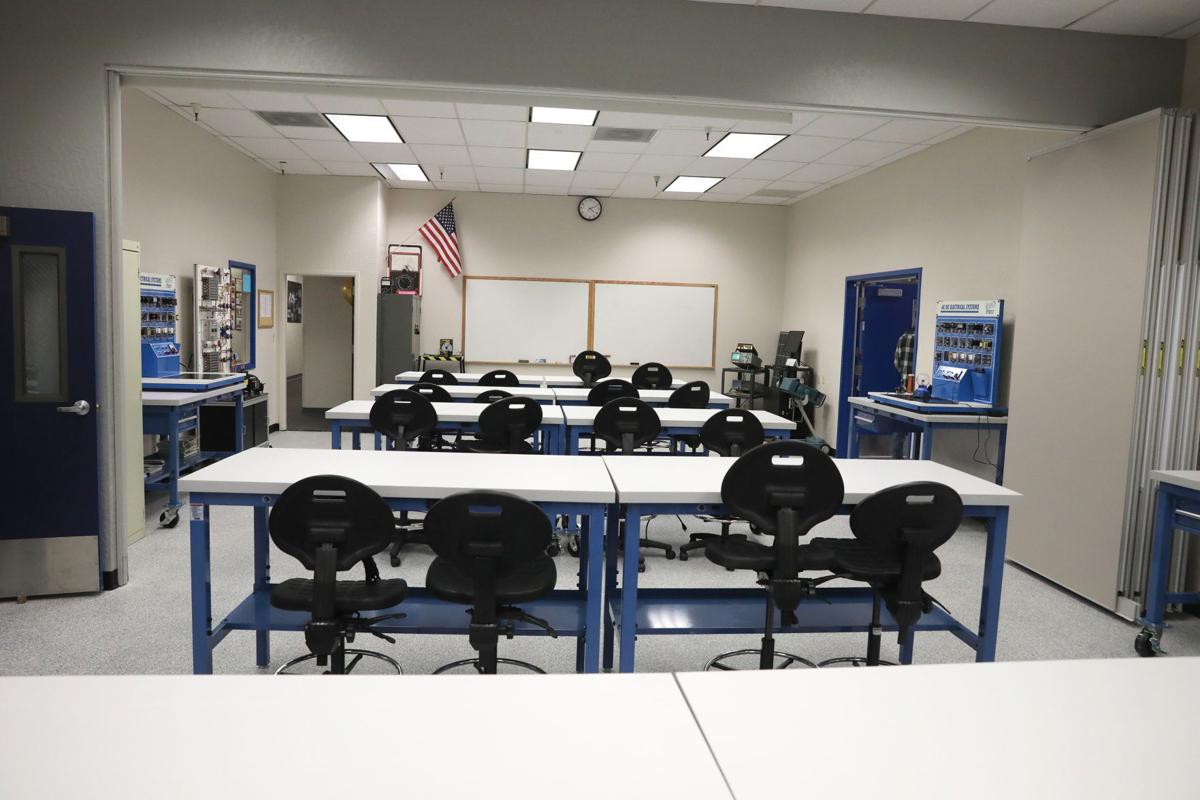 A new classroom is part of the Construction and Sustainability Program C-Lab at Coconino Community College’s Fourth Street Campus. 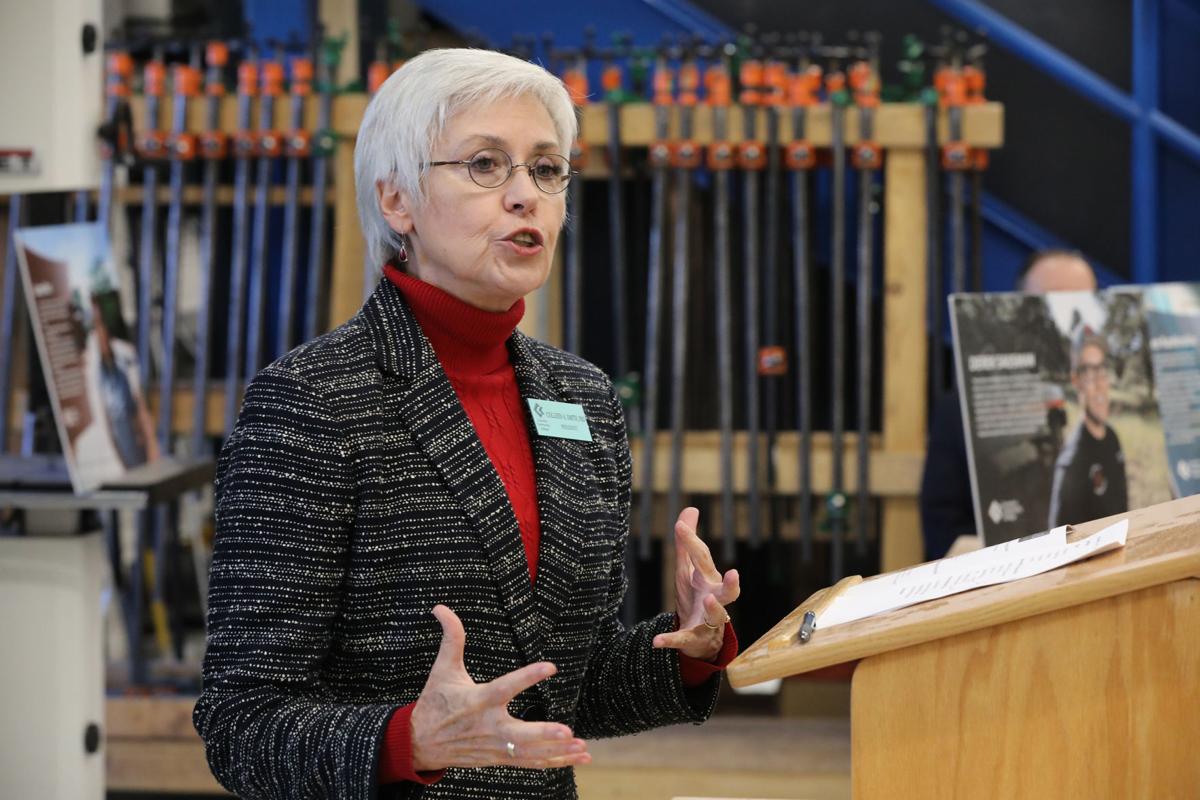 The new Coconino Community College construction lab smelled just as it should during its opening ceremony Monday, with the sharp aroma of fresh paint and lumber wafting down the halls of the college’s Fourth Street campus.

“I’ve been waiting nine years for this day,” said Ken Myers, CCC’s lead construction technology management (CTM) faculty. “My dream when I got to this job was to build a premier training facility for northern Arizona for all construction trades and I think we’ve accomplished that. … Everything that you can possibly think of in construction, we do in this facility.”

Monday afternoon, a group of about 50 CCC staff, community supporters and participating groups like the Del E. Webb Foundation, which awarded a $1 million grant to fund the project, gathered to dedicate the new space.

“The world needs hammer-swingers and people that can saw and people that have a skill set,” said John Lees, president of the Prescott-based Del E. Webb Foundation. “If you can take people that don’t have any skill set and give them that skill set, you made the world better. We were honored to be part of it.”

Construction on the 5,000-square-foot space began at the end of September. The total project budget was $1,058,500, with $997,500 coming from the Del E. Webb Foundation and $61,000 from CCC. During construction, students were able to continue their hands-on projects at Sinagua Middle School’s workshop, where CCC classes met in the evenings.

The renovation included updates to both a classroom and workshop, which are connected. The classroom now holds two virtual reality welding simulators, a refrigeration training unit and electrical circuit training systems, while the workshop is meticulously arranged to accommodate students as they work at one of the room’s many worktables, with shelves of handheld power tools and batteries in neat lines, screws sorted into small bins and large storage totes stacked at the south end of the room.

Students began using the space Thursday, just over a week after the start of CCC’s spring semester.

“I had to throw students out the door,” Myers said of their first day in the new space. “They just wanted to keep on working, keep on playing with the new tools and they were so excited to be in here.”

CCC administrators hope the improvements will encourage students of all types to choose the community college’s programs for their training. Provost Nate Southerland said if people are trained locally, they are more likely to stay in the county. With this update, he said the college can expand its overall CTM program, as well as offer training in heating, ventilation and air conditioning (HVAC), electrical programming, advanced welding and more.

“Skill trades that [students] previously have been able to get the first part of, they can now take it further and return to the workforce and add value to our community,” Southerland said.

Over a three-year period, the college is aiming to increase the number of students earning degrees or certificates from about 30 students to more than 90.

“This is going to be revolutionary for us,” Southerland said. “We’re excited to show you what we can do. With these little bit of resources we can impact the students and the folks here in Coconino County.”

Lees said CCC will be eligible to reapply for the Del E. Webb grant again in a few years, after the final installment of the current grant is paid. Teams with passion like that displayed by the CCC faculty and staff are often the ones who receive such grants, Lees noted.

Prior to awarding the grant, the Foundation team was introduced to CCC’s CTM program during a visit to see the Fourth Street campus’s Medical Simulation Lab and the “smart” mannequins they funded to help nursing, emergency medical technician and paramedicine students practice their skills. When they learned the lab itself was built by students in the construction technology management program, they immediately went to see the workshop and meet the faculty and students.

“We’re about community and this is as good a community as I’ve ever seen,” Lees said. “Mr. Webb would have loved this. He would have thought this was the coolest thing ever.”

The sun was just setting and a soccer match was still playing on the Sinagua Middle School field as another group of students arrived for class.

“Do you know what city you’re in?” a paramedicine student asked a mannequin in a small hospital room at Coconino Community College’s Fourth St…

A new classroom is part of the Construction and Sustainability Program C-Lab at Coconino Community College’s Fourth Street Campus.