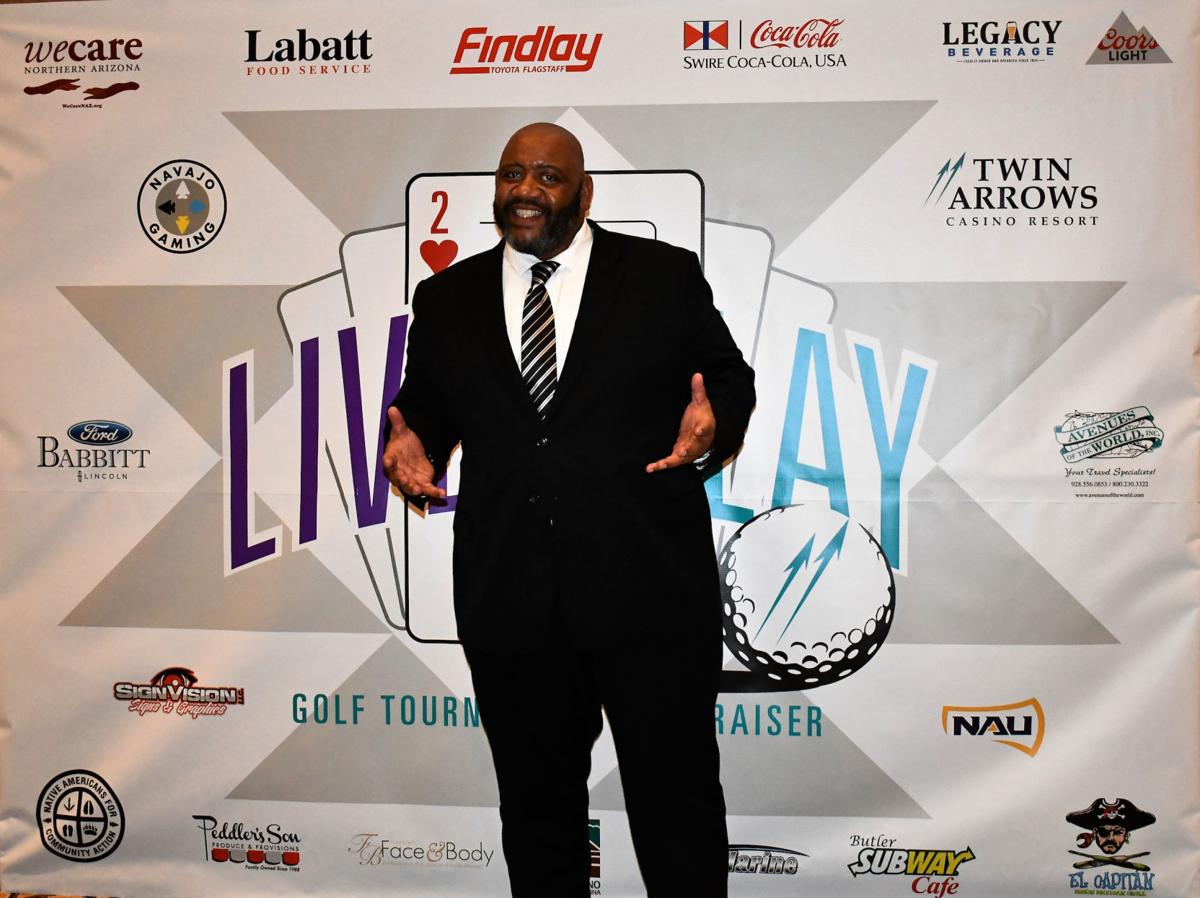 Bubba Ganter was the guest speaker at the inaugural Live 2 Play FUNraiser in late September. Ganter is a native of Flagstaff and survivor of attempted suicide. An outstanding Coconino High football player, Ganter was awarded a full ride college scholarship when injuries cut his football career short. Later he entered the entertainment business as a bodyguard, and later made appearances in music videos and in films such as “A Texas Payback,” “Unsolved Mysteries” and “Soldier’s Story.” More recently Ganter has been a regular on Nickelodeon programs such as “Game Shakers” and BET’s “The Family Business.” He became involved with We Care NAZ through his personal struggles and attempted suicide, and now volunteers time to share his story with local schools. 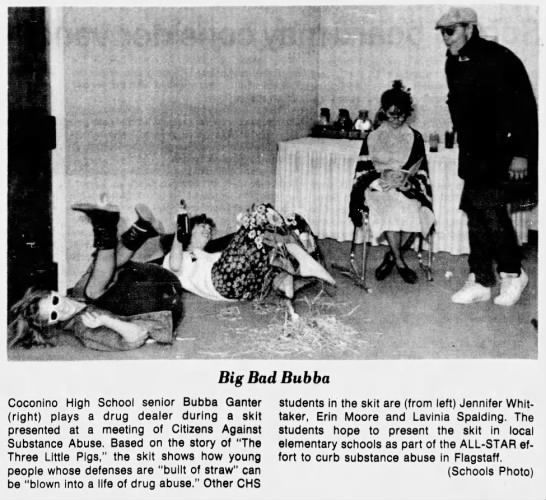 This photo from the March 22, 1987 edition of the Arizona Daily Sun shows Bubba Ganter during his time with Citizens Against Substance Abuse.

Bubba Ganter knew exactly what he wanted to do at the age of 15. He had his plans of playing as a lineman in the NFL, but had bigger ideas to make his voice heard around the world.

“In high school, I was probably the most popular kid in Flagstaff with my athletics and my outspokenness,” Ganter said. “I started public speaking when I was about 15 at city hall for CASA (Citizens Against Substance Abuse).”

Standing on the steps of city hall as a Coconino High School student in 1984, the Panthers varsity football star began his journey to reach out to others in need of help. Not only has he made a name for himself as a mental health advocate, but he is also a successful actor in Hollywood and squeezes in time for high school football broadcasts on KAFF Country Legends.

“Whatever [KAFF] asks me to do, I’ll be there to do it,” Ganter said. “I believe in community and I’m trying to give back to the Flagstaff community.”

Ganter has always had a passion for sports and analytics, especially being a former lineman. He started with radio while in college in Phoenix, and the passion continued to build.

“When I was younger, I used to listen to broadcasts on the radio, and I always knew I wanted to do something like that,” Ganter said. “I think a lot of athletes become analysts when they’re done playing because you love the sports so much and you still want to be a part of it.”

After graduating from Coconino, he continued his football journey at Scottsdale Community College for one year. He then transferred to the University of Arizona, where he was injured on the second day of practice.

Shortly after coaching for the community college, he began his path to stardom by becoming a bodyguard for singer-songwriter Dolly Parton. He then worked as a bodyguard for the popular American boy band New Kids on the Block from 1989 to 1994.

While taking a break from touring, he had his first big acting role as a character named Earl.

“I got a call asking if I wanted to be in a movie,” Ganter said. “It was a friend of mine and I guess they needed another person. So I said, ‘yes,’ and the next day, I was on the movie set for a role in ‘A Texas Payback.’”

Things didn’t go exactly as planned for Ganter. Originally, he wanted to play in the NFL and make his name known before entering Hollywood. Although professional football didn’t work out for him, the rest of his life fell into place.

After his big break, the roles in different movies and shows kept coming his way. He has since starred in Nickelodeon’s 'Game Shakers,' "Sam & Cat," and movies such as "Middle Men," "Falling Overnight," and "Columbus Circle."

Ganter still makes plenty of time to come back to Flagstaff.

“This go-around is the longest I’ve been in town for,” Ganter said. “It’s been about three months, but I’m home and it’s peaceful here.”

When Bubba is in town, he jumps at any opportunity for on-air time with Dave Zorn and Reggie Eccleston to call high school games on KAFF.

Zorn, the news and sports director for the past five years at KAFF, has worked personally with Ganter for the past three years on broadcasts.

“As far as us locally, his knowledge and history with Coconino High School in the football program is so valuable to us when broadcasting these games,” Zorn said. “I definitely feed off of that knowledge on the local aspect."

He added: “Bubba brings this whole different quality in. We’re better off having him around, no doubt.”

Eccleston, a former first-team All American wide receiver for the University of Connecticut, has worked side-by-side with Ganter as a color commentator.

“With his sports background and all of the success he has had within the Hollywood scene and being from Flagstaff, it’s a wonderful thing that he keeps coming back to give to the community,” Eccleston said.

Zorn and Eccleston aren’t the only ones excited to have Bubba on board for the broadcasts. Ganter hopes to stick around with the crew and Coconino team in the future.

“Calling a Coconino game is probably a lifetime dream,” Ganter said. “I know it sounds simple considering the things I’ve done, but it’s the simple things that make me happy.”

Even after all of his success, Ganter is still the most passionate about being a mental health advocate. Having personally suffered from depression, suicidal ideations and attempts, Ganter has turned his life around positively and wants to share his story with the world.

He is currently gathering ideas for a film about his own life. He also is working directly with organizations such as You Matter Too and used to speak on behalf of CASA.

“He is one of those guys who is a pleasure to be around and get to know,” Eccleston said. “He is such a giver. That is what really attracted me to get to know him better.”

Although Ganter enjoys his jam-packed schedule of interviews, filming, broadcasting and public speaking, he still wants to be the same personable guy that everyone loves and knows.

Ganter claims that it is still hard to believe he is a public figure. He takes pride in being humble about his successes and is described by many as a genuine and down-to-earth person.

“I appreciate the accolades I get for being a celebrity, but I just want to be Bubba and want to help other people,” Ganter said. “If I can motivate someone to keep going, motivate kids to follow their dreams, that’s my main purpose in life.”

Hobby Lobby has recently confirmed that it will be opening its new location in the Flagstaff Mall in late August.

Personal pandemic rituals — yeah, we’ve all got them — can range from the self-indulgent to the selflessly altruistic. Whatever gets you throu…

Mark Gooch, the airman charged with first-degree murder for the kidnapping and killing of Sasha Krause, could be placed on bail at a hearing n…

Bubba Ganter was the guest speaker at the inaugural Live 2 Play FUNraiser in late September. Ganter is a native of Flagstaff and survivor of attempted suicide. An outstanding Coconino High football player, Ganter was awarded a full ride college scholarship when injuries cut his football career short. Later he entered the entertainment business as a bodyguard, and later made appearances in music videos and in films such as “A Texas Payback,” “Unsolved Mysteries” and “Soldier’s Story.” More recently Ganter has been a regular on Nickelodeon programs such as “Game Shakers” and BET’s “The Family Business.” He became involved with We Care NAZ through his personal struggles and attempted suicide, and now volunteers time to share his story with local schools.

This photo from the March 22, 1987 edition of the Arizona Daily Sun shows Bubba Ganter during his time with Citizens Against Substance Abuse.