Designed to offer a light in the community, Chabad of Flagstaff’s Molly Blank Jewish Community Center suffered an attack against its mission this past weekend.

With paint and plaster thrown around, and Hope Construction’s tools damaged, the most notable damage came in the form of swastikas smeared on the windows in paint and crudely carved into the walls.

“With the shock that comes with it is the resolve that it brings,” Rabbi Dovie Shapiro of Chabad of Flagstaff said. “This is not going to deter us, it’s only going to make us stronger and bring the community together even more. This facility is very open, we are here to be a positive light in the community and open our doors to everyone, it doesn't matter what your background is.”

The Flagstaff Police Department said because the center's affiliation with a synagogue, and because of how the swastika symbol has been used historically, it is investigating the incident as a hate crime.

While nothing was stolen during the break-in, Flagstaff police spokesman Sergeant Charles Hernandez said the incident is “defiantly alarming.”

Officers collected fingerprints, "biological evidence" (a phrase that includes hair, saliva and blood) as well as video footage from several cameras in the area to see if they could identify the suspects.

The center is currently under construction and is expected to open this summer. As such, no one was present at the site between late afternoon Friday and Monday morning. Construction workers arrived after the weekend to find evidence of the break-in in multiple rooms.

“It was extremely disturbing. I always thought that it wouldn’t happen here in Flagstaff,” Shapiro said of his initial response to the call.

“It was just sad to hear. We all know that there are people who have hate in their hearts and its anti-Semitism is still out there in the world.”

Since arriving in Flagstaff 13 years ago, Shapiro said he had never encountered anything as severe as the weekend’s hate symbols inside the center.

“We have never experienced anti-Semitism. Not as an organization, not as individuals, and Flagstaff is just such a welcoming, warm community. Hearing this, that people came through vandalizing the place, threw things all over the place, made swastikas, that was a shock,” Shapiro said.

While the police department doesn't know exactly how much the damage will cost, it estimated the figure will be more than $1,000. Because construction on the building is ongoing, the the cost of the damage might  have been more limited.

Shapiro said the assumption is the suspects entered the construction site over the fence between University Car Wash and broke into the building through a wood panel over a doorway.

While Shapiro declined to speak on any specifics, he said Chabad has always taken security very seriously and that the incident will raise the congregation's awareness of just how important safety will be once the center is finished.

“It’s been a concern for all of us in the community. We take security very seriously,” Shapiro said. “There's been a rise of anti-Semitism and it’s pretty clear. It’s unfortunate and it’s sad to see a culture like that rising in America, but again I like to believe Flagstaff is different.”

Shapiro said the architect of the community center envisioned a place where the outdoors could be brought in -- serving as a kind of lighthouse  overlooking the community. The center’s location up the hill on University Avenue makes it so that the glass windows in the back overlook the city toward Milton Road and Northern Arizona University.

Once completed, the center will be open to all members of the community regardless of background with no membership fees required. Shapiro said Chabad is nondenominational and completely donation based, with all forms of Judaism as well as other religions welcome. He added that its message is “love your neighbor as yourself, that's the foundational teachings of Chabad.”

Shapiro acknowledged incidents like the vandalism could not be stopped overnight.

“It’s a reality, there is hate out there. People hate for no reason whatsoever,” Shapiro said. “We try to come up with reasons why people hate and I think it’s a disease, a spiritual disease. People have an inner hatred for people that are not like them, for people they don't understand. Unfortunately, we live in a culture where killing and even vandalism, it's part of the culture. It’s entertainment."

FPD encourages anyone with information about the crime to contact detective Mike Rodriguez at (928) 679-4098 or Silent Witness at (928) 774-6111. On Tuesday afternoon, the Anti-Defamation League announced that it is offering a reward of $2,000 for information leading to the arrest and conviction of the individual or individuals responsible.

As work continues on the Southside neighborhood plan, the city announced staff would hold weekly office hours and another community meeting at…

County and city officials concerned over citizenship question on 2020 census

As county and city officials continue to work toward a complete count on the 2020 census, one question remains unanswered that may influence i…

After identifying three finalists for the city’s “Innovate Waste Challenge,” the city announced this week it will host a public final-pitch ev…

As affordable housing remains an issue in Flagstaff, residents looking to city-run housing programs for help are running into the challenge of…

Mapping every sign and trash can, city intern travels all 56 miles of Flag urban trails

It was a bright warm morning as Joseph Nagle, wearing a florescent orange construction vest and holding an electronic tablet, crested the top …

A member of Congregation Lev Shalom arrived at the east side synagogue on Monday and discovered it had been defaced with graffiti.

After years of hard work and prayers, Chabad of Flagstaff’s Molly Blank Jewish Community Center is now open after their ribbon cutting ceremon… 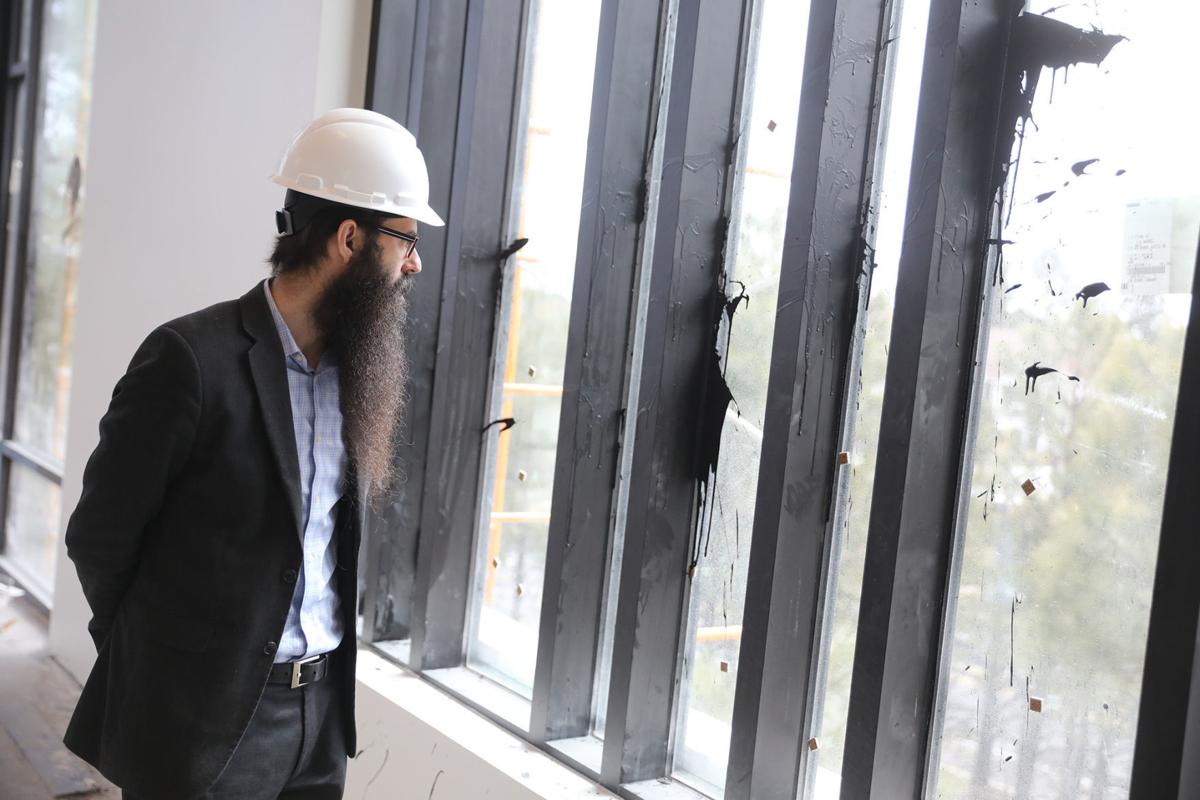 Rabbi Dovie Shapiro looks over new windows that were splattered with black paint after vandals broke into the construction site of the new Molly Blank Jewish Community Center on University Avenue. In addition to the paint and plaster that were thrown around, there were crude swastikas carved into the walls and painted on the windows in black paint. The Flagstaff Police Department is investigating the incident as a hate crime. 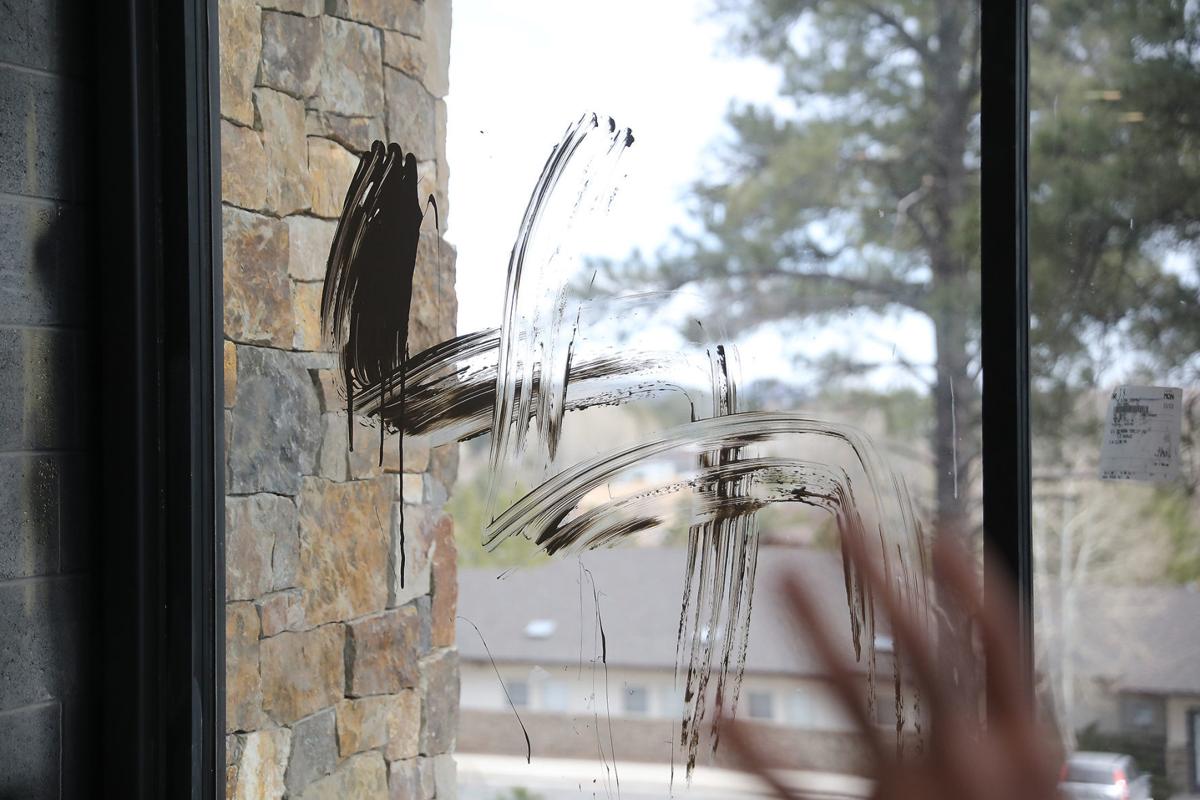 A crude swastika symbol drawn in black paint covers one of the windows at the new Molly Blank Jewish Community Center on University Avenue. The Flagstaff Police Department is investigating the incident as a hate crime. 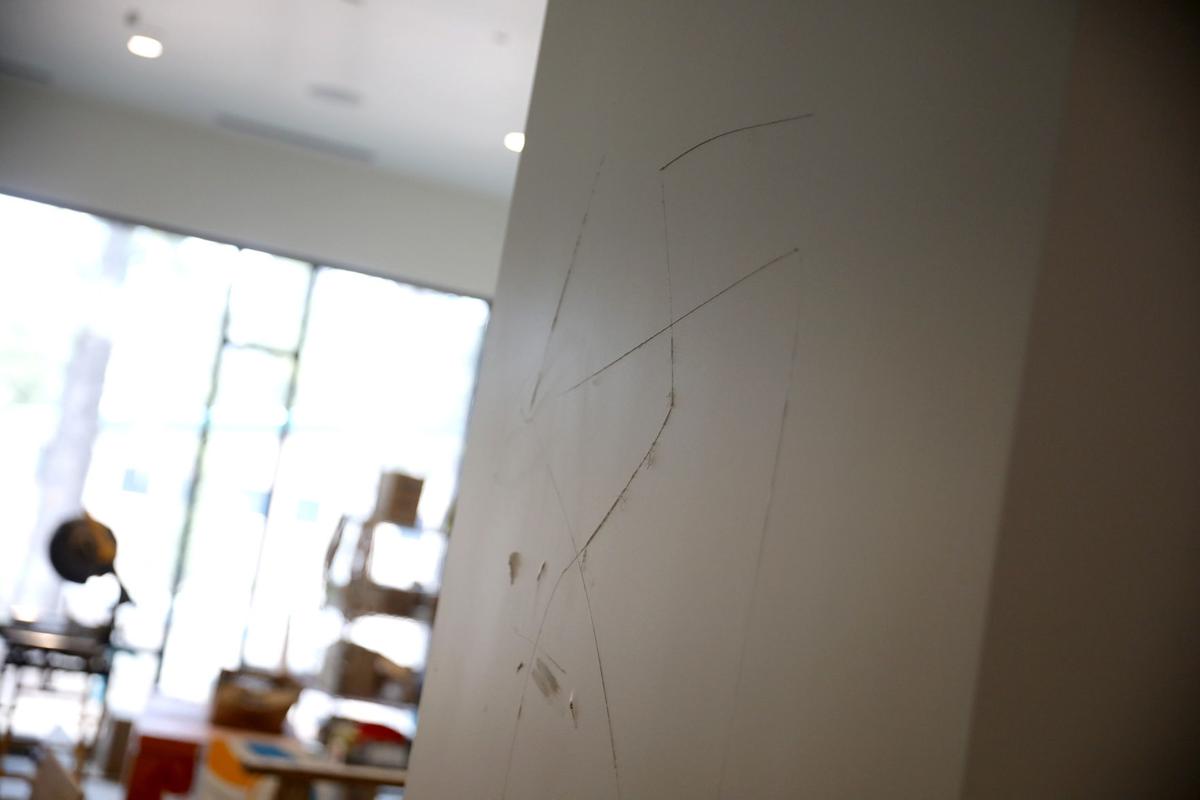 The new Molly Blank Jewish Community Center on University Avenue was vandalized over the weekend with paint and plaster on floors and across walls. In addition to paint and plaster, which were thrown around, there were crude swastikas carved into the walls and painted on the windows in black paint. The Flagstaff Police Department is investigating the incident as a hate crime. 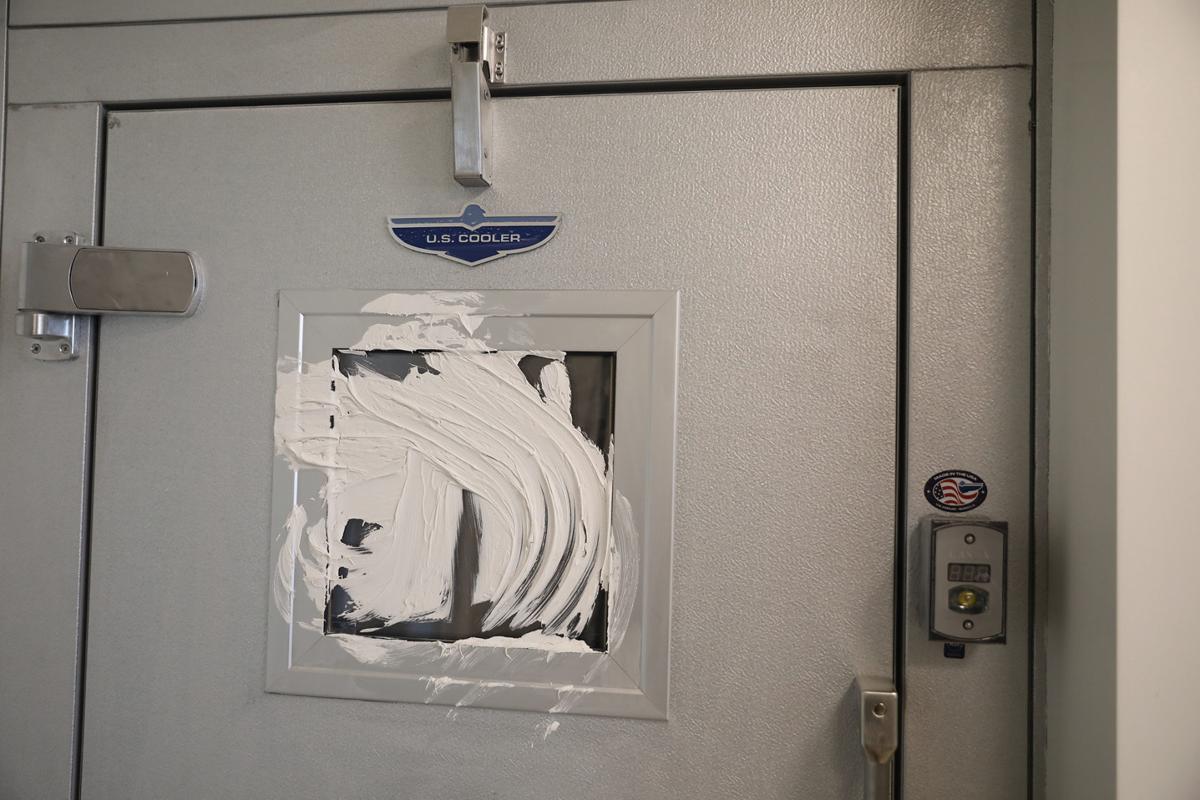 Plaster mud was smeared over the windows of two newly installed walk-in coolers at the new Molly Blank Jewish Community Center under construction on University Avenue after a break-in over the weekend. 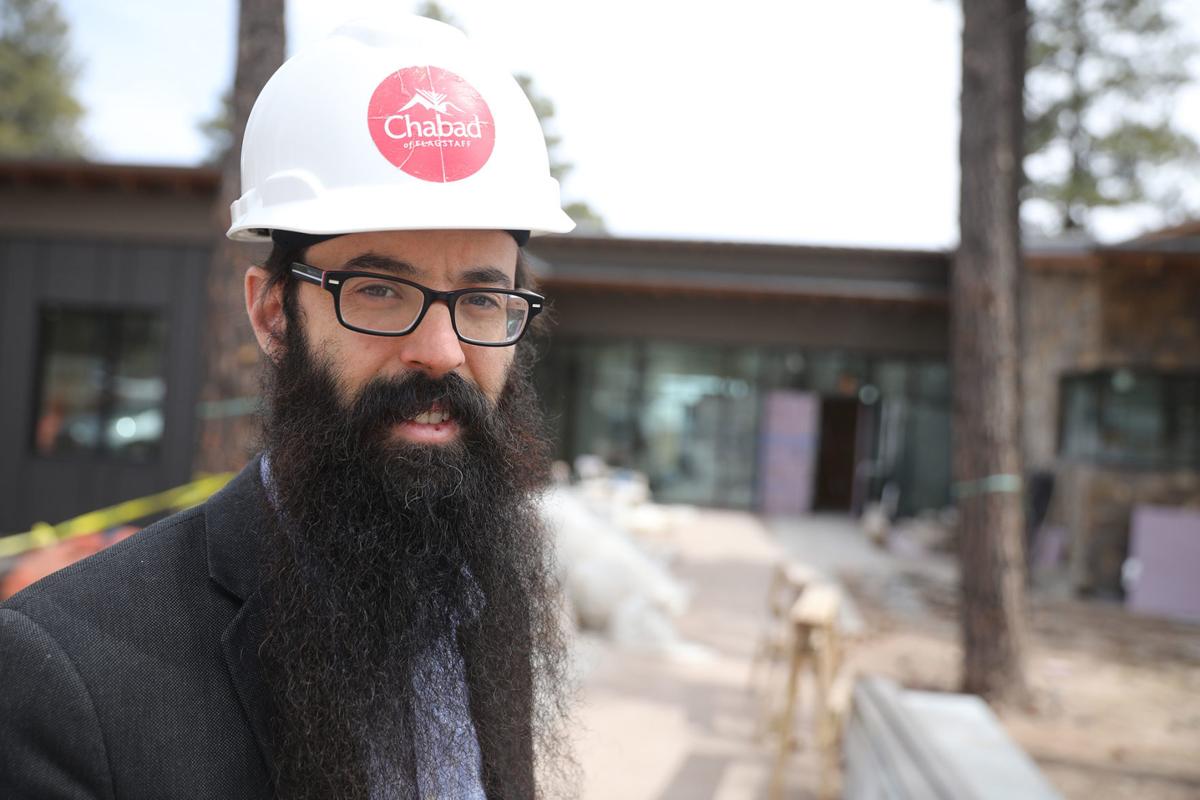 Rabbi Dovie Shapiro talks about discovering the vandalism at the new Molly Blank Jewish Community Center, which is under construction on University Avenue. Among the damage were several crude swastikas both carved into the walls and painted on the windows in black paint. The Flagstaff Police Department is investigating the incident as a hate crime. 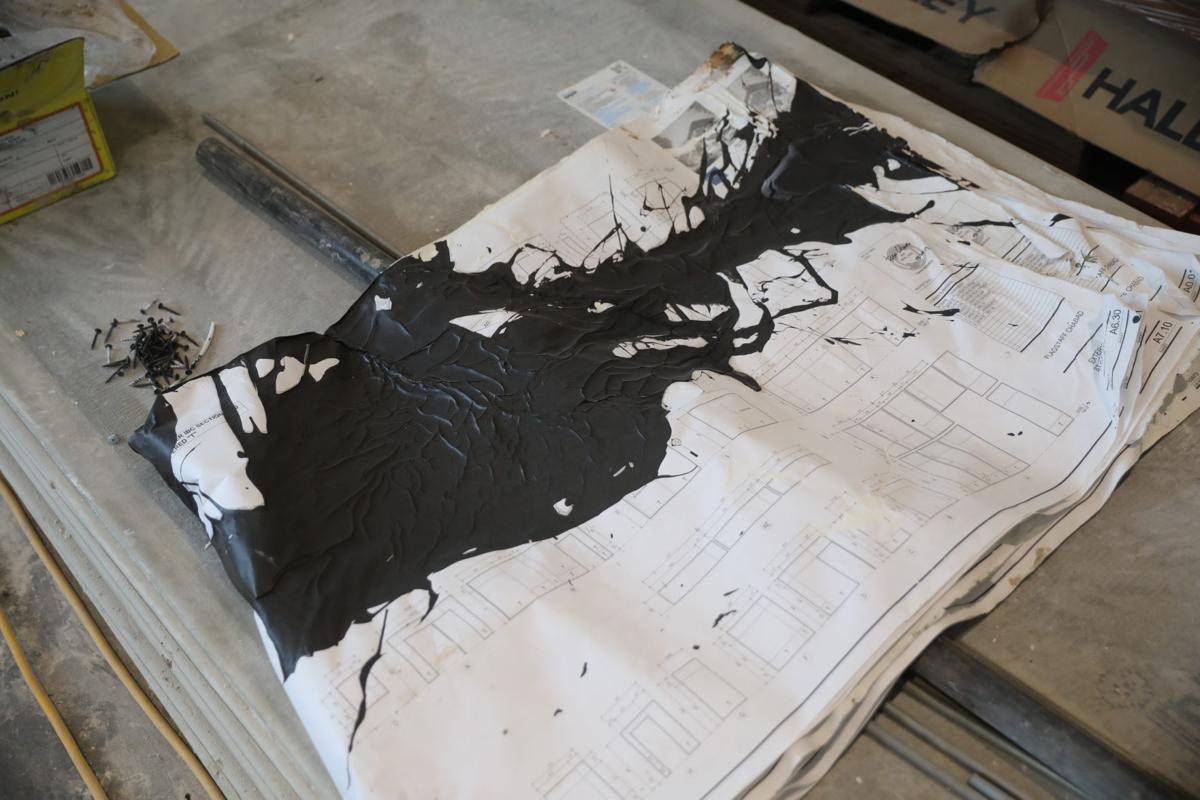 Black paint was poured over the construction plans for the new Molly Blank Jewish Community Center on University Avenue during a weekend break-in. In addition to paint and plaster, which were thrown around, there were crude swastikas carved into the walls and painted on the windows in black paint. The Flagstaff Police Department is investigating the incident as a hate crime.