Become a Member
Read Today's E-edition
Share This
Caught in the storm: Tackling homelessness in record snowfall
2 comments
Share this
1 of 2 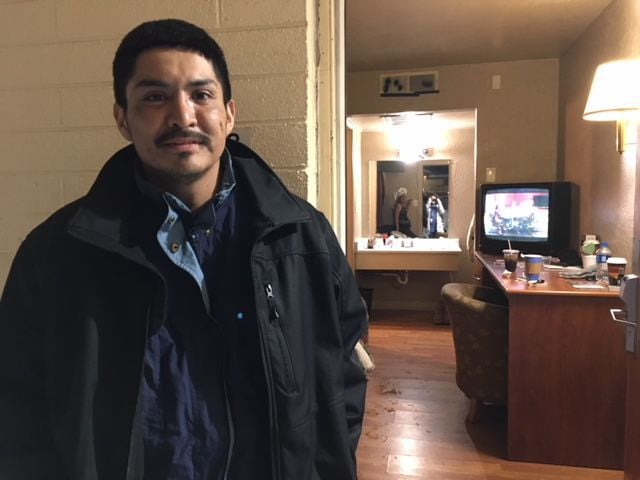 Tyrone Poyer stands outside the hotel room the Catholic Charities PATH homeless outreach program rented for him and his pregnant fiancé during the big February snow storm. Poyer and his fiancé had been staying outside and in homeless shelters since they came to Flagstaff from the Navajo Nation in search for work. 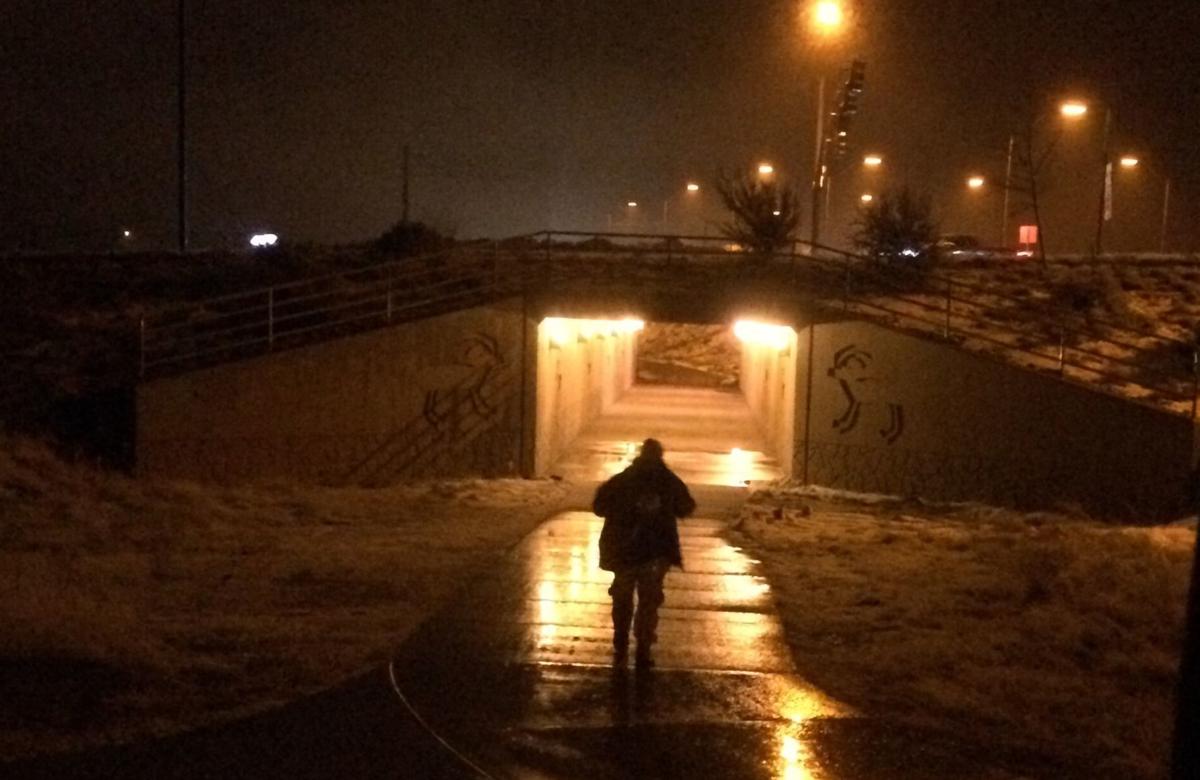 This photo shows PATH Outreach Specialist Corrin Johns searching the tunnels around Flagstaff for homeless people at risk of freezing to death outside during a snowstorm last month.

Over the course of February's record-breaking storm and the three days that preceded it, 41 people found themselves outdoors and without shelter.

While Flagstaff’s homeless population drops between the months of November and April, about 80 percent of those who live in the city during the summer stay through winter, according to Ross Altenbaugh, executive director of Flagstaff Shelter Services. And winter presents its own challenges, especially come nighttime.

Since 2010 Richard Brust, homeless outreach coordinator with Catholic Charities' PATH (Projects for Assistance in Transition from Homelessness) program, has been driving in and around the city with teams of two or more people on nights where the temperatures are predicted to drop below freezing, seeking out individuals before they settle down for the night.

“When we go out, we offer people assistance and the option to go with us for transportation to a shelter of some kind,” Brust said.

These can include motels, domestic violence shelters (though they are often full) or a faith-based organization -- one of the eight or so churches that take part in Flagstaff Shelter Service's overflow program.

After the family or individual gets settled, Catholic Charities gives individuals the option to partake in an evaluation by the organization to gauge the need for health or financial help. They also refer them to Front Door, a so-called coordinated entry system that can connect people to other organizations and living options within Flagstaff.

"Sometimes it’s easy to find folks by finding foot tracks in the snow; other times, like this last snowstorm, you’ll drive by some foot tracks that you found and they'll be covered in less than an hour," Brust said.

By his estimation, Catholic Charities outreach teams cover anywhere from 30-50 miles on any given night.

People are under no obligation to go with Brust and his colleagues and can instead opt for supplies that they bring on the drives: items like tarps, blankets, sleeping bags, socks, gloves, hats, hand warmers, food and water, hygiene kits and flashlights.

“Some decide to stay out," Brust said.

That applied to four of the 41 individuals who were out during the storm, he said.

The outreach teams typically start the night between 9 and 10 p.m., after they've bought the necessary supplies and checked the availability of beds in local shelters; they stay out until about 3, sometimes 4 a.m.

On the night of Feb. 22, with the storm total creeping closer to the 4-foot range, the teams worked until 8 a.m., according to Brust.

"We ran into a bunch of people who were stranded at the Greyhound station. Their bus wasn’t coming, so we made sure they were staying warm. A few of them had places to go. We took a number of people where they needed to go in terms of shelters," he said.

Other conditions besides sub-zero temperatures that dictate sending outreach teams include freezing winds and/or more than two inches of snow.

In the winter of 2013, eight people experiencing homelessness died of exposure in Flagstaff, a number that dropped to zero in 2017. Thirteen people total died in that five-year span: According to data collected by FSS, two people died from exposure in 2014, two in 2015 and one in 2016.

According to the National Health Care for Homeless Council, 700 people experiencing or at risk of homelessness are killed from hypothermia annually in the United States.

Flagstaff Shelter Services opened its overflow program in 2014, in part to combat exposure deaths. The partnership with a number of faith-based organizations that rotate their space offers anywhere from 10-40 beds, depending on the church.

According to Altenbuagh, nobody has been turned away for lack of beds since then.

"One exposure death is too many already, and what we'd hate is if it was because there isn’t room, because that’s unacceptable," she added.

All this comes as Housing and Urban Development’s Annual Report on Homelessness in Arizona showed a 10.3 percent increase between 2017 and 2018.

The 2018 annual Point in Time count showed the homeless population at 415 people in Coconino County. The vast majority of those counted, however, about 86 percent, were in the Flagstaff area.

Of those counted, 118 were found outside shelters and 297 were in shelters.

The 2018 Arizona Balance of States (a designation that includes every county in Arizona except Maricopa and Pima) found 2,187 people experiencing homelessness. This is a 24 percent increase over the prior year's count; 1,085 of all persons (49.6) percent were unsheltered -- a 53 percent increase over 2017's PIT results.

This can, in part, be attributed to an increase in population generally. However, according to HUD, the increase, at least statewide, is also the result of rising rent costs, housing prices and stagnant wages.

According to Leah Bloom with the City of Flagstaff Housing Program, Flagstaff continues to face similar issues.

"Nationwide, affordable housing has become a critical issue in communities and unfortunately Flagstaff is no different," she said.

When a homeless shelter closes its doors, even temporarily, the need for it doesn’t just go away.

There were 10 people in line outside the door to Catholic Charities in Sunnyside on Wednesday, Oct. 30 by the time Office Manager Mary Lawson …

Organization of the year: Catholic Charities: A dedication to dignity

Sandi Flores’ favorite word is dignity. It hangs above her office door, in bold script, and if you ask her about Catholic Charities, where she…

'Concerning' asteroid will break into Earth's orbit in a week: NASA

'Concerning' asteroid will break into Earth's orbit in a week: NASA

Tyrone Poyer stands outside the hotel room the Catholic Charities PATH homeless outreach program rented for him and his pregnant fiancé during the big February snow storm. Poyer and his fiancé had been staying outside and in homeless shelters since they came to Flagstaff from the Navajo Nation in search for work.

This photo shows PATH Outreach Specialist Corrin Johns searching the tunnels around Flagstaff for homeless people at risk of freezing to death outside during a snowstorm last month.