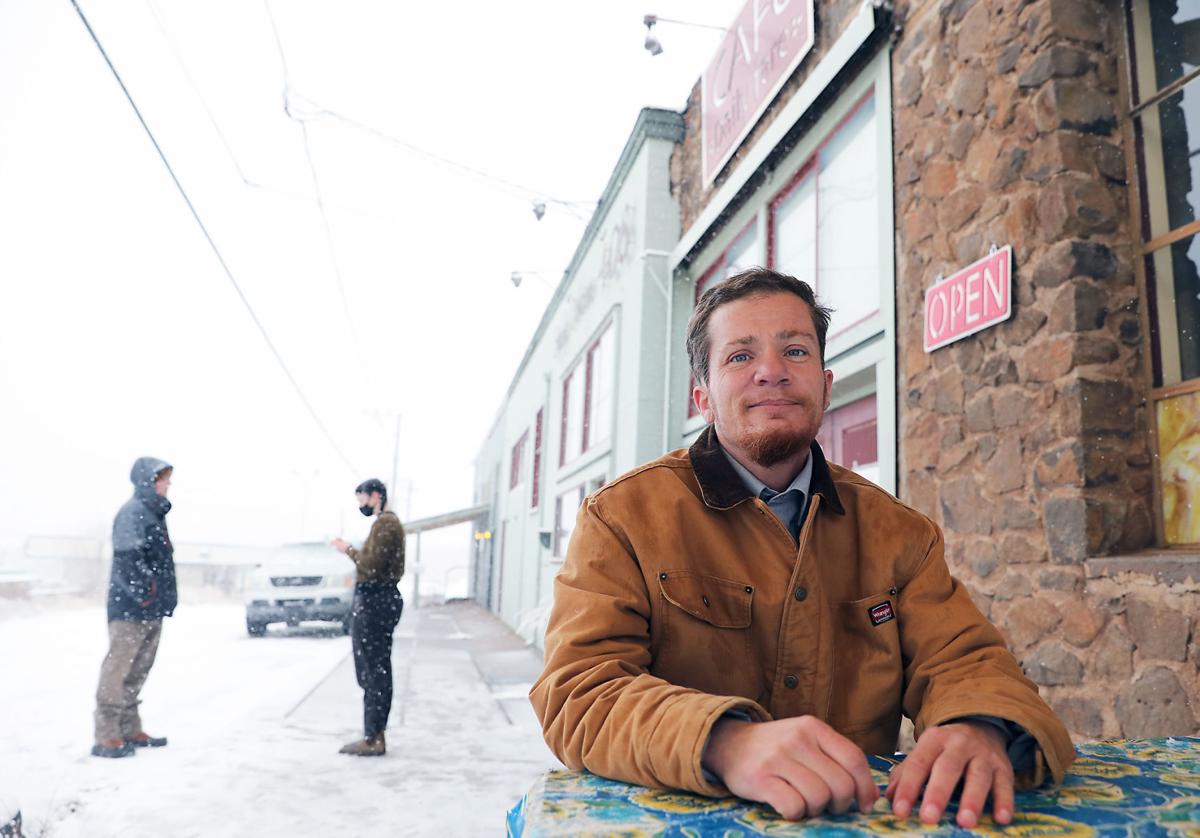 John Backe, along with fellow local businessman Tyler Klein, is helping lead the Flagstaff Cash Mob, which storms Flagstaff businesses with customers as a way to show support during the COVID-19 pandemic. 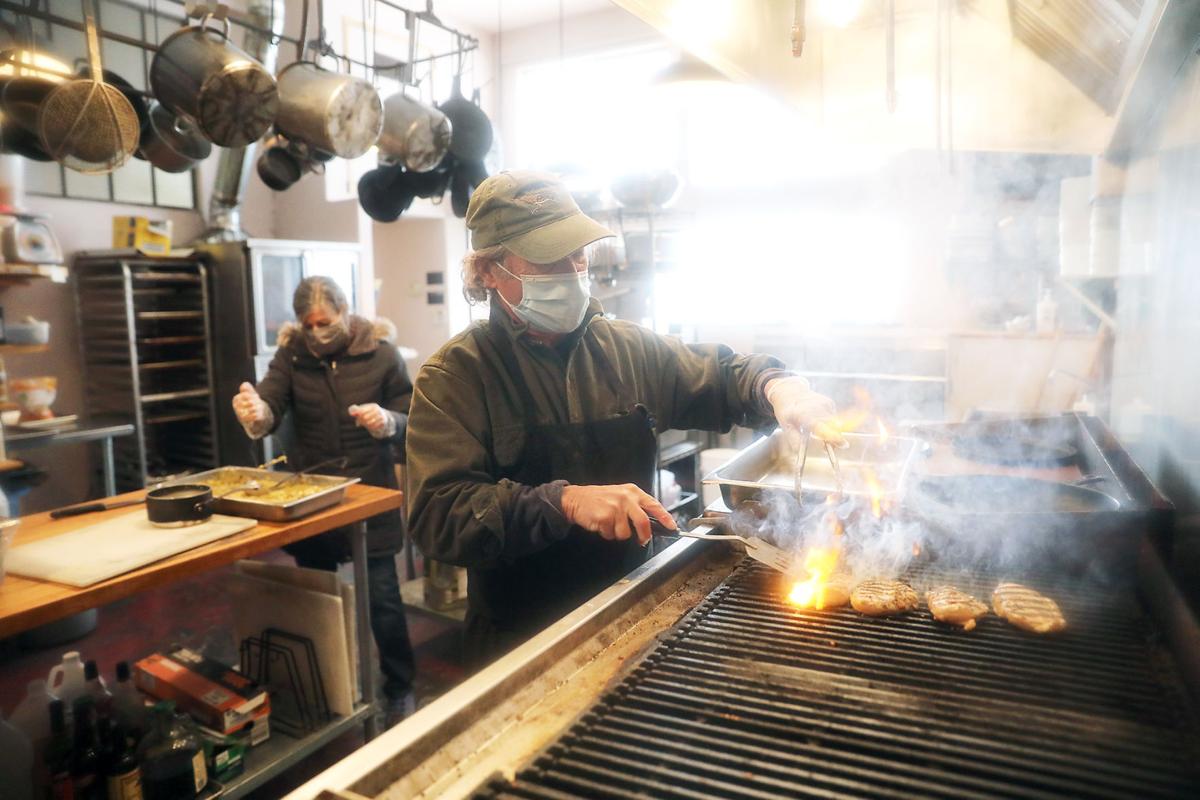 Café Daily Fare owner John Duffy works in his business recently that was stormed by the Flagstaff Cash Mob, a group that seeks to help local businesses in response to the pandemic.

Lately, that pointed single-syllable noun “mob” has taken on ominous overtones due to current events. But here in Flagstaff, a friendly mob has sprouted, a mob that places generosity over insurrection, and wants to help, not harm.

The newly formed Flagstaff Cash Mob seeks to provide some financial succor to struggling local businesses by mobilizing to carry out a well-coordinated plan once a week to meet at a chosen place — so far only restaurants — and inject some much-needed revenue, usually about $20 per member, before dispersing and continuing on with their day.

This show of civic support may not be a permanent solution to the financial woes experienced during the pandemic-related economic slowdown, but it’s a start, a gesture, a way to say that these mom-and-pop places matter.

Cash mobs have cropped up around the country, and the Flagstaff organizers, local businessmen John Backe and Tyler Klein, formed their core of about 100 supporters on Facebook just after the start of 2021. Two weeks ago, the mob swarmed Jitters Lunchbox, giving the deli a nice bump in business, according to owner Doug Evans. And, this past Tuesday, a few mobsters braved a swirling snowstorm to patronize Café Daily Fare on Route 66.

Altruism and citizen engagement may be what drives Backe and Klein to help their fellow merchants. But there are ulterior motives as well -- namely, a good helping of egg salad.

Backe, who works in online retail and has a side hustle as a delivery drivers, sheepishly admitted he chose Jitters as the inaugural Flagstaff Cash Mob stopping place because he loves their egg salad and would hate to see the place go under and deprive him of his fix.

“When I moved here about a year and a half ago, that was the only place I could find with egg salad,” he said. “Seriously, my (part-time) job at Door Dash has given me the chance to visit a lot of local businesses, and I see how they are struggling. Because I’m a delivery driver and got knowledge about what’s open and what’s closed, I’ve got a following on the ‘We Are Open Flagstaff’ (Facebook) group, so I decided to throw out the cash mob idea. Everyone knows Flagstaff is a community that comes together, so I thought it might work.”

Within minutes of Backe’s posting, Klein, who owns the Fat Man’s Barbecue food truck and manages a local towing service, had signed on. The two then went about spreading the word via social media. The response, they said, was immediate.

What the Flagstaff Cash Mob does is simple. The goal is for people to spend around $20 at a local business chosen by the two organizers at the appointed day and time. In the case of Jitters, owner Evans was alerted beforehand and was prepared for a steadier customer stream than usual at the lunchtime rush.

“After they explained it to me what a ‘cash mob’ was, I thanked them for it,” Evans said of Backe and Klein. “Our revenue was up that day, so it was kind of nice. I think we got some new faces in to go along with a lot of regulars we have here. It’s an opportunity to build a little extra base. We’re down about 20% since the pandemic, so the business helps.”

Earlier this week, when Café Daily Fare was the intended target, one crucial element was left out of the operation — they had forgotten to inform the restaurant/catering business’ owners, Nancy and John Duffy, who turned out to be busier than usual behind the grill flipping chicken breasts for lunch orders.

“You caught us in a perfect storm,” Duffy said, laughing, when learning of the cash mob that would be at his door. “It’s awesome to get caught with your pants down. But that’s the biz. You’re going to be surprised and you’ve got to be quick on your feet. Hell, it’s only lunch. People aren’t, like, storming the Capitol here. We’re just trying to get by.”

Once fully apprised about the mob’s motives and modus operandi, Duffy came around.

His business, which originally focused primarily on catered events and the lunch crowd, certainly needs a boost, he conceded.

“We’ve been slow,” Duffy said. “We do this drop-pickup thing (for lunch customers) and that’s what’s been keeping us going. Catering? Zip. For this year, all our weddings catering was canceled. We’re just about paying our bills. As owners, if (expletive) hits the fan, we’ll pay ourselves.”

Backe, standing outside Café Daily Fare’s doors amid swirling snowflakes waiting for the mob to descend, felt bad that the minions were few and far between because of the inclement weather, far fewer than at the previous week’s Jitters convocation.

“Maybe we’ll redo (Café Daily Fare) again, because of the snow, you know, give them a fairer shot,” Backe said.

Then again, there are a lot of locally owned restaurants out there needing a revenue injection.

“We go off suggestions from our members, and a lot mentioned Café Daily Fare,” Klein said. “We’ll take what we can find, maybe even at pick at random.”

Klein said the cash mob cause received a boost of its own when an anonymous donor ponied up a $500 donation.

“That really got us started,” Klein said. “My dad and I travel around town a lot and try different places, so we talk with people and they told us it’s been hard. (The restaurant scene) is not completely dead, but not normal. It’s been harder hit than expected.”

But the cash mob bosses hope the Tuesday flashes continue. And the two are trying to expand their reach by adding a Thursday “action” at a locally owned non-restaurant business. They have chosen midweek, they said, because that’s usually when downtown business ebbs.

“Flatlanders from Phoenix can only bring in so much business," Backe said, "and that’s mostly on weekends. These places need local support.”

That time in her life is over, thankfully. Laura Wilson, seven years on, has mostly resumed living in the B.C. period, before cancer. All is w…

From a rescuer's perspective: Injured hiker forced to stay overnight on Mount Elden

A search for an injured man on Mount Elden turned into an overnight rescue operation as daylight faded and weather took a turn for the worse.

The Flagstaff Police Department released body camera footage, audio from 911 calls and police reports related to a use-of-force incident that …

John Backe, along with fellow local businessman Tyler Klein, is helping lead the Flagstaff Cash Mob, which storms Flagstaff businesses with customers as a way to show support during the COVID-19 pandemic.

Café Daily Fare owner John Duffy works in his business recently that was stormed by the Flagstaff Cash Mob, a group that seeks to help local businesses in response to the pandemic.