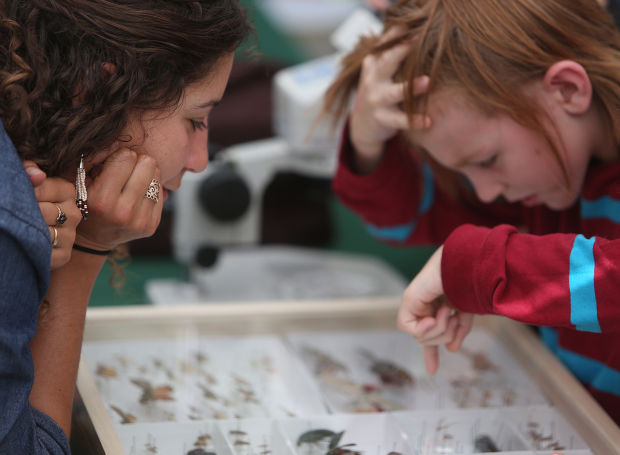 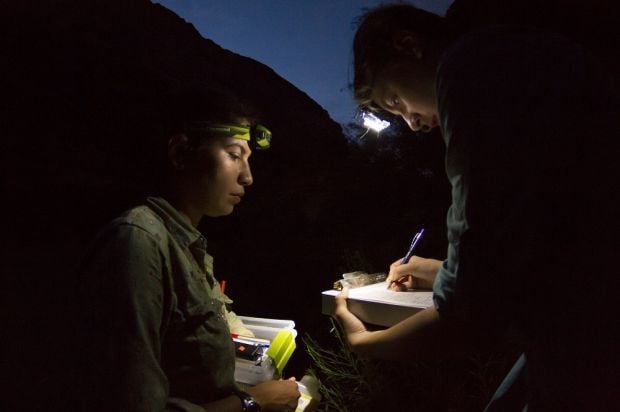 Anya Metcalfe, left, and Eric Kortenhoeven, both researchers with the U.S. Geological Survey, record notes after a night of trapping aquatic insects on the Colorado River. USGS scientists are studying aquatic insects, the role they play in the food web of the Grand Canyon, and how they are affected by the management of the Glen Canyon Dam. (Courtesy of: Freshwaters Illustrated/USGS) 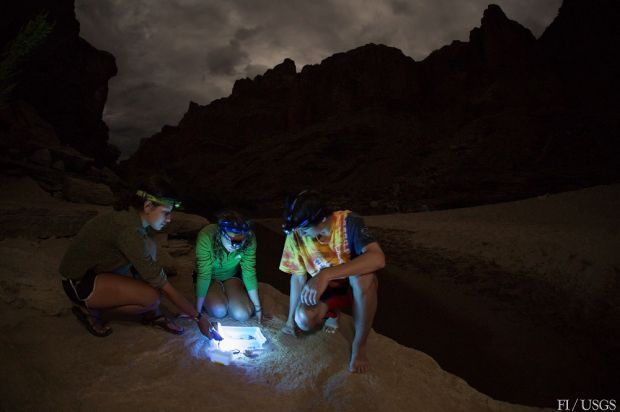 Anya Metcalfe, left, a researcher with the U.S. Geological Survey, checks out bugs captured in a light trap set at the edge of the Colorado River. USGS researchers are partnering with river rafters to collect aquatic insect samples along the river to study how those insects are affected by changes in river flow, sediment and temperature. (Courtesy of: Freshwaters Illustrated/USGS)

At the end of each day spent rafting through the Grand Canyon, Gibney Siemion turns her focus to bugs. Just after dusk falls, she pulls out a jar of ethyl alcohol, pours it into a container and sets up a small blacklight, then places the contraption near the river's edge. Over the span of an hour, the setup attracts hundreds of bugs that represent a small sample of the insects flitting around in the night air.

Siemion then pours the bug-filled alcohol into a container and at the end of her trip, drops off the samples at the U.S. Geological Survey’s Grand Canyon Monitoring and Research Center in Flagstaff. There, aquatic biologist Ted Kennedy is heading up a massive study of the tiny aquatic insects that play a vital but largely unnoticed role in the food web of the Grand Canyon.

Raft guides like Siemion have collected thousands of samples, and millions of insects, over the past three years. Together, they are helping Kennedy and a team of researchers piece together how insect populations are affected by the constantly rising and dipping flows of the river caused by the tug of hydroelectric and water storage demands.

The work is leading to a new depth of understanding about how current management of Glen Canyon Dam is affecting this tiny but essential part of the river’s food chain.

So far, aquatic insect research in the Grand Canyon has taken a back seat to studies of endangered fish and sandbars, Kennedy said. But these invertebrates are hardly a species to ignore. They’re a fundamental food source for animals higher on the food chain, so whatever happens to bug populations directly affects the native and nonnative fish species that are front and center in river managers’ minds.

“We have to get to the root causes of what the fish that we care about eat if we're going to manage them,” said Jack Schmidt, chief of the Grand Canyon Monitoring and Research Center. “It's a no-brainer.”

Like almost every other element of the Colorado River, aquatic insect populations have been severely affected by Glen Canyon Dam. Species diversity is pitiful compared to other rivers unregulated by dams. Midges and black flies dominate the invertebrate environment.

Such a simple food web is not only less resistant to major changes in river flow, but the limited insect supply is essentially acting as a bottleneck to the further growth of fish populations, Kennedy said.

So what's happening to all the insects?

That’s where the river guides come in. Thanks to the vast number of bugs collected by rafters, Kennedy is able to start tracking how the volume and variety of insects vary in response to changes in water sediment levels, river temperature and flow rates caused by dam operations. Next, he’s planning to look at other stages of the bugs’ lifecycle and has proposed studies looking at the where and how the insects are laying their eggs.

“To get at the question (of where the insects have gone) we had to understand aquatic insect life cycle,” Kennedy said. “We need to look at all stages see where the limiting step is, where is the bottleneck?”

Part of the answer will also come from studying insect populations in other rivers, both regulated and unregulated, to find out whether those rivers are supporting a more diverse array of insects. If so, researchers can try to pinpoint what may be preventing species like mayflies, stoneflies and caddisflies from making a home in the Grand Canyon.

Kennedy already has several theories about what’s happening to insects on the Colorado River. The constantly shifting water levels that are a result of varying discharge rates through Glen Canyon Dam are likely to blame, he said. Insects lay their eggs at river’s edge, but if the water level rises before those eggs hatch, they could be washed away. If the opposite happens and the water level drops, the eggs could quickly dry out in the heat.

Already, Kennedy's aquatic insect data has shown that abrupt decreases in the number of adult midges coincide with abrupt changes in regulated discharge from Glen Canyon Dam that are required to fulfill increasing hydropower electricity and water demands downstream.

Temperature could also be a factor. If the temperature of the river drops because of a major release from the cold depths of Lake Powell, then the insects’ development, which is highly dependent on water temperature, could be delayed.

To prove their theories, the USGS research team is proposing a flow experiment to see if leveling out the discharge rates from the dam, even just on the weekends, would help more midge and black fly eggs progress to the larval and adult stages or allow other types of insects to develop as well.

Kennedy’s experiments also convinced dam managers to reconsider the timing of high flow experiments, a tactic thought to improve the ecosystem downriver from Glen Canyon Dam. The long-term experiment, which the Department of the Interior touted as a huge step forward in dam management, calls for releasing a flood of water from Lake Powell to simulate natural flood conditions that wash sediment from the Colorado River's tributaries into the main stem.

Kennedy’s team connected trout population increases to a huge spike in midge and black fly populations after the flow release. The problem is that an ever-growing trout population could begin migrating downstream, eating chub food sources and even the fish’s young. Thanks to insight from the insect research, dam managers have switched the flow experiment from spring to fall to avoid triggering a large increase in trout food sources right as the fish eggs are hatching.

“The general assumption was that there's no way there could be any harm in doing this (high flow experiment), but we've seen there are some potential tradeoffs,” said Colden Baxter, a professor at Idaho State University who has been a collaborator on the USGS’s research on insects and food webs.

Beyond the Grand Canyon

The insect studies being conducted by Kennedy and his team are some of the most in-depth and detailed looks into insect emergence happening anywhere in the world. But it’s just one piece of an almost decade-long quest to better understand the complex interactions between the eater and the eaten in the Grand Canyon. The work is crucial in terms of maintaining and managing the biodiversity of the Grand Canyon, Baxter said.

But the research has applications far beyond northern Arizona as well. The era of dam-building may be coming to a close in the United States, but it’s just revving up in developing countries across the world. The food web studies will help communities in those areas peer into the future to see what their river ecosystem may look like in the decades after a dam is built.

“The results from this work are helping to at least frame the conversation about the potential ecological costs of dam building in other parts of the world,” Baxter said. “We face a very complex management problem to maintain remnants of the native biodiversity in the Colorado (River) and that's the type of future that faces managers of rivers in other parts of world.”

Anya Metcalfe, left, and Eric Kortenhoeven, both researchers with the U.S. Geological Survey, record notes after a night of trapping aquatic insects on the Colorado River. USGS scientists are studying aquatic insects, the role they play in the food web of the Grand Canyon, and how they are affected by the management of the Glen Canyon Dam. (Courtesy of: Freshwaters Illustrated/USGS)

Anya Metcalfe, left, a researcher with the U.S. Geological Survey, checks out bugs captured in a light trap set at the edge of the Colorado River. USGS researchers are partnering with river rafters to collect aquatic insect samples along the river to study how those insects are affected by changes in river flow, sediment and temperature. (Courtesy of: Freshwaters Illustrated/USGS)