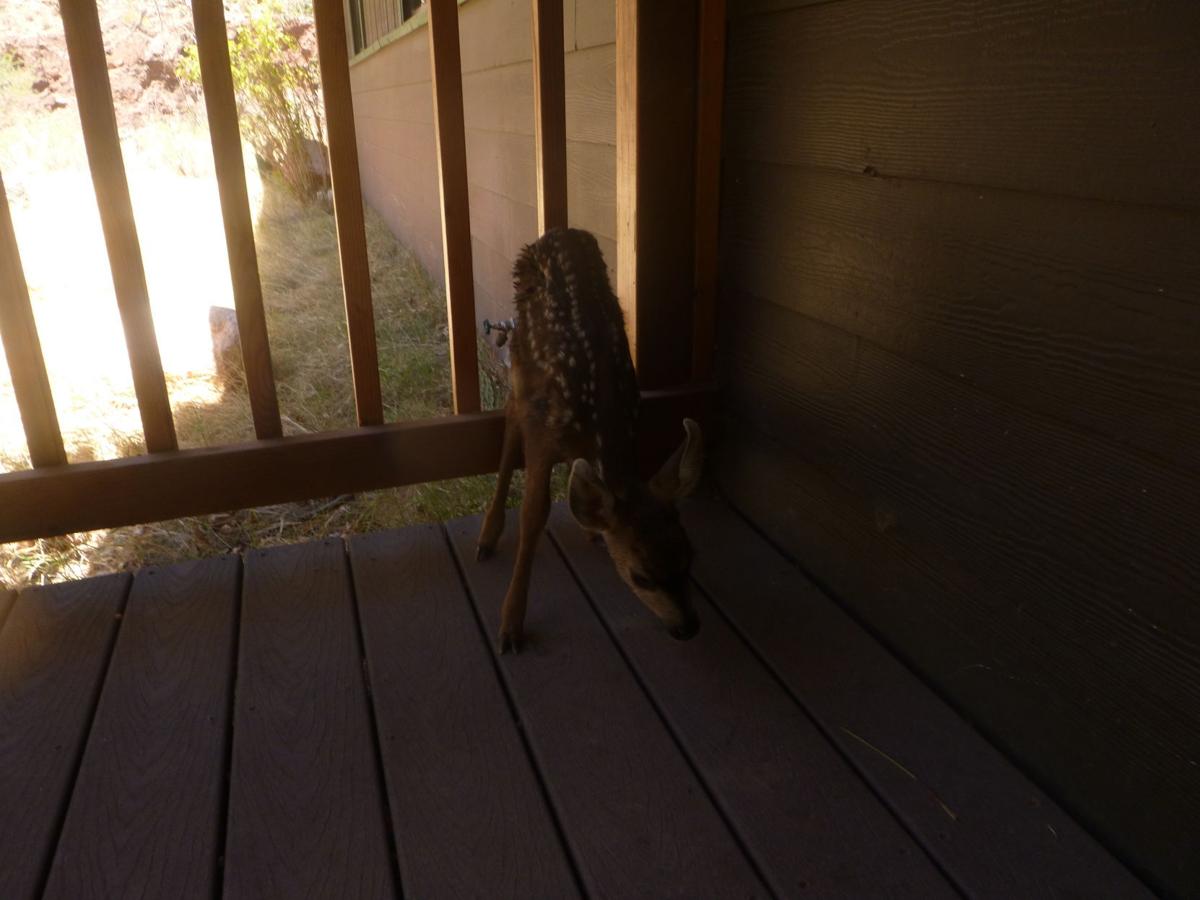 Visitors to Grand Canyon National Park scooped up this fawn as they were hiking near Phantom Ranch last week, thinking it had been abandoned and needed help. The fawn was able to be returned to its mother, but park officials are trying to warn visitors of the detrimental impacts of handling wildlife at the canyon. 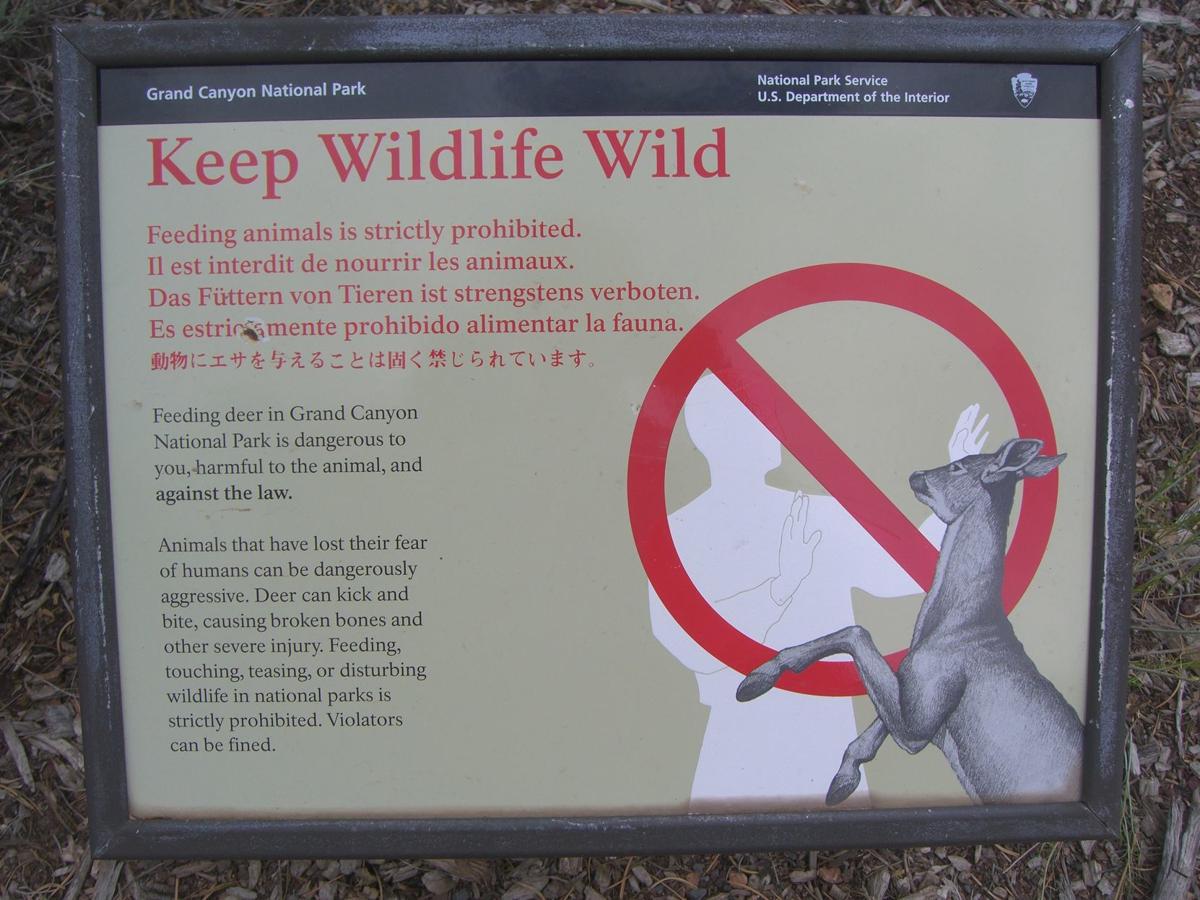 Signs warning people against approaching wildlife abound in Grand Canyon National Park. Still, instance of people feeding or getting close to elk and squirrels are common.

Around noon, another ranger answered the doorbell to a couple standing with a young fawn, not more than a foot and a half tall, wrapped in a t-shirt, Yurcik said. The couple said the baby deer had walked up to them near a creek about a quarter mile from Phantom Ranch and, after not seeing the animal’s mother around, they decided it probably needed help, according to Yurcik.

As well-meaning as the gesture was, scooping up the baby deer was detrimental to the deer and could have risked its survival, Yurcik said.

Handling, approaching or interacting with wildlife in the park makes the animals more accustomed to humans, leading them to do things like search trash for food and move into populated areas, which can lead to dangerous interactions with people, park officials said.

Grand Canyon National Park is filled with signs urging visitors to keep their distance from wildlife, reminding them that it is illegal to feed or approach wild animals. But still, human-wildlife interactions are common, especially in the Grand Canyon Village area on the South Rim, said Brandon Holton, wildlife biologist with the park.

Most often it’s when people approach squirrels or elk, trying to feed them or get closer for a good photo, Holton said.

It was the fawn incident as well as recent news that visitors were seen filling their cupped hands with water and letting elk drink out of them that spurred the park to make a push to educate the public on the importance of leaving wildlife alone, said Kirby-Lynn Shedlowski, spokesperson with Grand Canyon National Park.

Luckily, the fawn’s story had a happy ending, with it ending up reunited with its mother.

“But we don't want an unhappy ending,” she said.

When Yurcik saw the fawn, likely just a few months old, on the ranger station doorstep last week, she said she immediately instructed the visitors to put the deer down and leave.

Yurcik then took the animal back to the creek where it was found and wet it down with a towel. Rangers monitored the fawn and that evening saw its mother come back to it. Two days later, the pair was observed together again, Yurcik said.

A ranger at the canyon for 13 years, Yurcik said the experience initially brought her to tears because she initially feared she would have to euthanize the baby deer. She was thinking of the bison calf in Yellowstone National Park that had to be euthanized in May after tourists loaded the animal into their car thinking it had been abandoned.

Just like those at Yellowstone, the hikers at Grand Canyon were surprised that they were scolded for trying to help what appeared to be an animal in distress, Yurcik said.

“The baby just happened to be walking by when people came, so in their mind it was coming up to them for help,” she said. Yurcik said she will likely issue the visitors a citation, and because handling wildlife is a Class B misdemeanor the charge could be up to six months in jail or five years probation and/or a $5000 fine.

Holden said it’s hard to make people realize the repercussions of getting close with wildlife -- even though signs are everywhere, making the message stick is difficult because most people are in the park for a day or less.

There are lots of potential consequences though. Years ago, a group of deer at Phantom Ranch had to be put down after eating human trash and getting plastic embedded in their stomachs, Holden said. If the animals become habituated to humans, they may calve in populated areas, then can become defensive around their young, which can be dangerous for people, Holden said.

Squirrels accustomed to handouts can get aggressive and seriously bite visitors, Holden said. Another worst case scenario is that deer keep approaching people to the point that they become a nuisance, and then have to be put down, Yurcik said.

Holton said it wasn’t at all unusual that the baby deer was left alone that day in the canyon. Ungulates like the canyon’s mule deer and elk often leave their young bedded down while they go forage for food. The mothers communicate with their young to stay put until they come back, Holton said.

“Unfortunately it’s commonplace for them to leave their young and it’s common for visitors to see what they assume to be abandoned animals,” Holton said. “They're trying to do a good thing and humanizing these animals -- I get that.”

Visitors to Grand Canyon National Park scooped up this fawn as they were hiking near Phantom Ranch last week, thinking it had been abandoned and needed help. The fawn was able to be returned to its mother, but park officials are trying to warn visitors of the detrimental impacts of handling wildlife at the canyon.

Signs warning people against approaching wildlife abound in Grand Canyon National Park. Still, instance of people feeding or getting close to elk and squirrels are common.