Bringing '80s, '90s style back to Flagstaff
0 comments
Share this
Return to homepage × 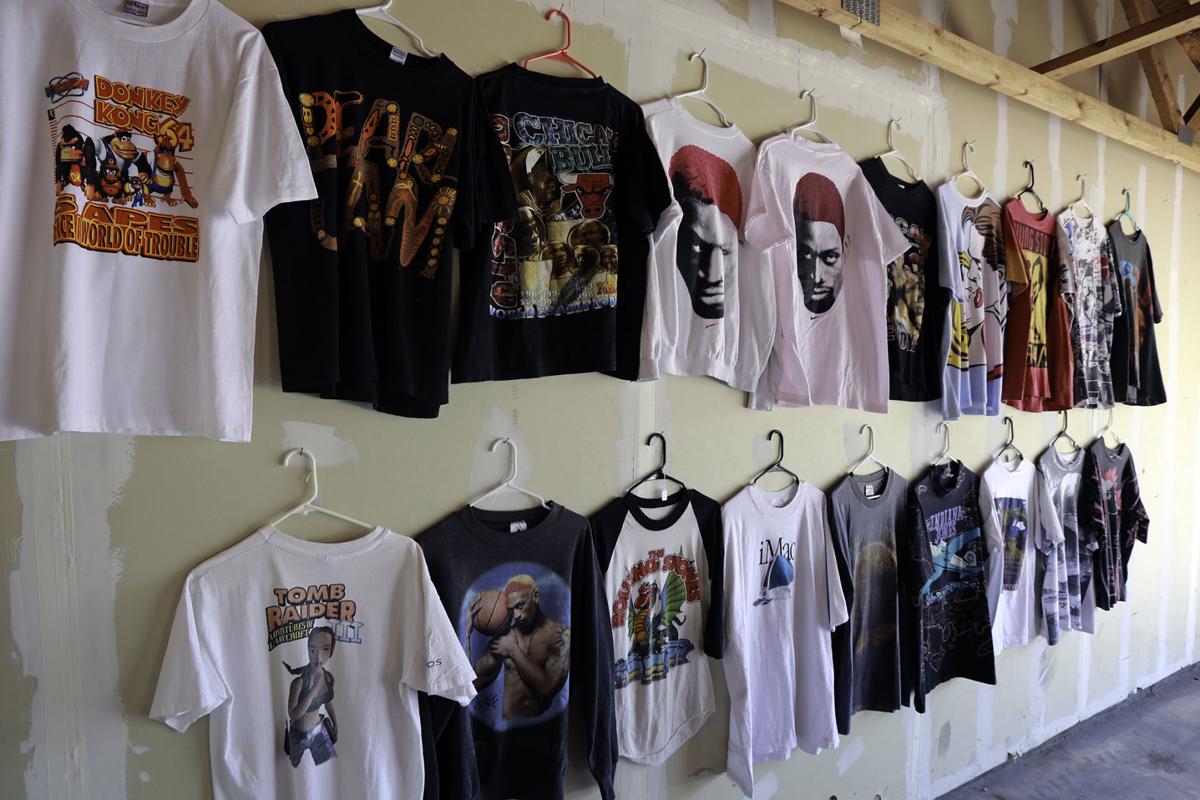 A collection of vintage T-shirts is displayed in the garage of Jacob McDaniel, Cody Phillips, and Jake Fishel, owners of Single Stitch Vintage T-Shirts, on Thursday. 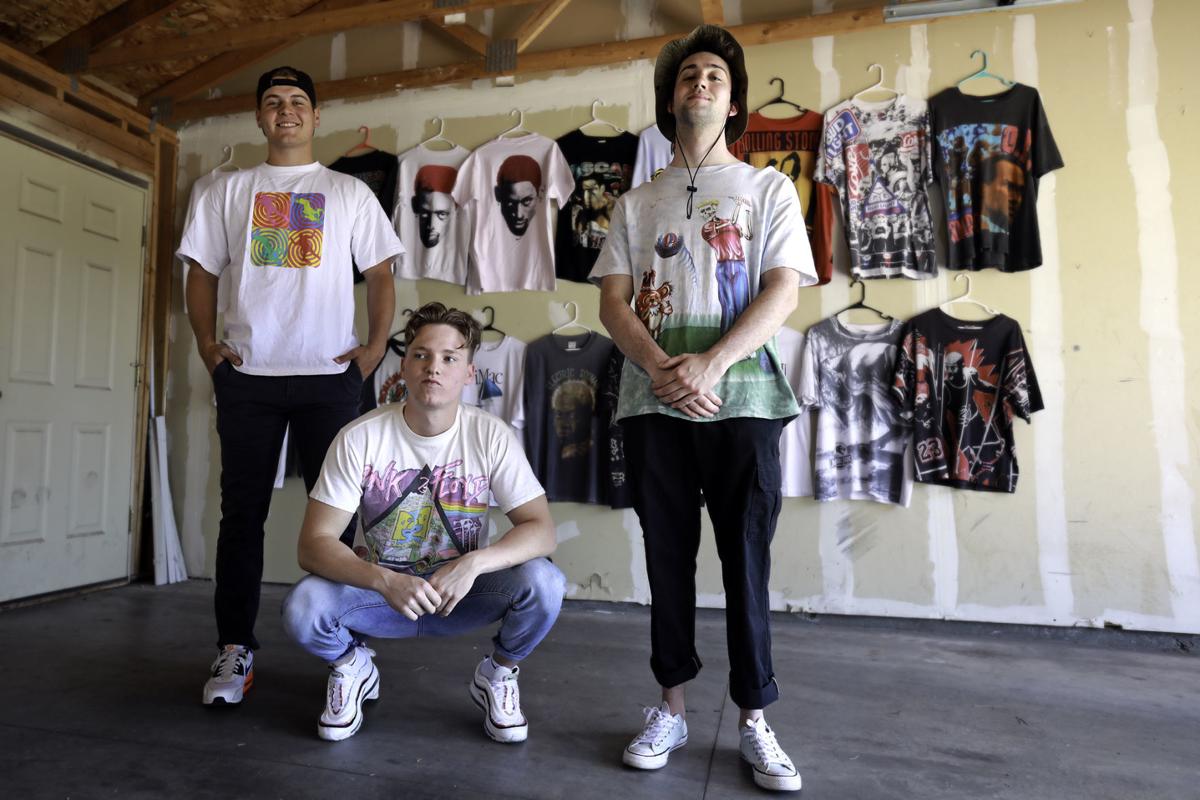 Jacob McDaniel (left), Cody Phillips (middle), and Jake Fishel (right) stand proudly in front of their collection of vintage T-shirts Thursday morning. The three young men collect and sell vintage tees from their home in Flagstaff and online at SingleStich.az.

Nostalgia confers a certain comfort and easy familiarity on the overheated modern psyche, recalling halcyon days with wistful longing for what lurks now only in the fond mists of memory.

But what to make of inter-generational nostalgia, specifically, the tendency for people of a tender age to yearn for times they were too young to experience in the first place, glomming onto movies, TV shows, video games or cultural phenomena dating in many cases before their birth?

Someone somewhere, no doubt, is preparing a doctoral thesis on just this subject right now. But the answer is quite simple for three Flagstaff entrepreneurs in their early 20s who are celebrating the one-year anniversary of starting a business, Single Stitch AZ, that specializes in selling vintage T-shirts from the 1980s and ‘90s.

Really, there’s not that much more to it for the three pals — Jacob McDaniel, 21, Jake Fishel, 20, and Cody Phillips, 20 — who have made decent coin scavenging thrift stores and scouring online for fine cotton shirt wear celebrating those often overlooked decades before social media and before that newfangled thing called the internet changed lives.

The three roommates sell the items, racks of faded T-shirts going from $10 to more than $100, out of their Flagstaff townhouse but, mostly, they do business out of their Instagram account and Depop app.

It is, to be sure, a glorious walk down memory lane for those old enough to remember when Dennis Rodman stood as a cultural icon, when “Seinfeld” a TV phenomenon, when early rappers and big hair bands were the epitome of cool and video games weren’t much more elaborate than “Donkey Kong.”

But for those born after this high water mark of culture, such as Single Stitch AZ owners, this renewal of ‘80s and ‘90s fashions is equal parts retro chic and kitschy. Perhaps Gen Z and younger Millennials have heard stories from their parents of those great Chicago Bulls teams of yore, or the classic song stylings of Rush or the Grateful Dead, or the hilarity of commercial catchphrases like “I Love You, Man,” and “Where’s the Beef?”

“You learn history and stuff from this,” Fishel said, pointing across the room to a faded O.J. Simpson tee with the visage of perhaps the most famous man acquitted for murder over the slogan, “The Juice Is Loose.”

Ebb and flow of fashion

Indeed, all three business owners recently met a reporter while wearing T-shirts that predated their births. Phillips was rocking an elaborate Pink Floyd “The Wall” design, with that oh-so-‘80s type of cursive script; McDaniel chose to rep the “Austin Powers” movie franchise logos; and Fishel sported an elaborate creation from Deadheads with too much time on their hands — an intricate design of the Grateful Dead playing golf, of all things.

The three, however, make no excuses for identifying with pop culture decades before their time. Everything old becomes new again, after all; cultural recycling has long been a thing.

“The Grateful Dead is a band that people did a million shirts for,” Fishel said. “All super unique, too. I actually became a fan of their music through learning about their T-shirt art. It takes on a life of its own and I got into them outside the clothes. All their tees have crazy graphics like this in tie dye.

“I really like old horror movie stuff, ‘Wolfman’ type of stuff from that period. And you know that old show, ‘Seinfeld?’ There’s a lot of ‘Seinfeld’ tees out there, really popular. That was my and my parents’ favorite show to watch together. It’s awesome in a nostalgia thing for me.”

Well, since “Seinfeld” left the air in 1997 and Fishel was born in 2000, he and his parents no doubt bonded over syndicated reruns of that quintessential show about nothing. But his point stands. New generations shouldn’t be left out from enjoying the pop-culture candy of decades past.

In a way, the fact that a subculture of ‘80s and ’90 nostalgia thrives can be looked at as a tribute to the lasting impact of the time. People still want Tupac and Mike Tyson tees, still think the original “Indiana Jones” movie franchise deserves recognition, still covet that early Steve Nash Suns jersey, still for some reason care about the Steve Miller Band’s 1994 “World tour.”

A lesson on tees

The three are pretty good historians of the era, but their interest runs more toward aesthetic and entrepreneurial.

“People really like the wear and tear on some T-shirts,” Phillips said. “It kind of shows what the T-shirt’s been through and the age as well.”

“Yeah, and some are like art pieces,” Fishel added, pointing to a USA Triathlon T-shirt that is a collage of the three disciplines in the sport, as well as sponsor logos in a kind of vomited design that covers the entire shirt, front to back.

That’s an example of “all over” tees, McDaniel said. Very popular in this era — and a tip off that the tee is “real” and not a knockoff made decades later.

But the real test of whether a T-shirt is authentic is whether it is single-stitched (hence the company name).

McDaniel explains: “Modern day double stitching is more like a quality thing, where your shirt will hold together better. But back in the ‘90s, before the U.S. started pushing all of our production of clothing overseas, they were producing cheaper shirts with single stitch. A Made-in-the-USA shirt won’t be double-stitched until about year 2000.”

Another sign of authenticity is tag spotting. McDaniel takes down a vintage Michael Jordan tee and reveals a grey Nike tag.

These days, due to the coronavirus pandemic, the three friends aren’t spending their free time scrounging around thrift store bins. They’ve been reduced to finding gems on the internet, buying them and then turning around and re-selling them online.

Before the time of social distancing, they did a lot of in-person sales, including at Northern Arizona University. They still take appointments out of their garage, but now the business has morphed primarily online. But you will still find the guys haunting Flagstaff yard sales, looking for undiscovered gems.

“People at yard sales are always putting out their stuff, but they’re not thinking of (including) their shirts because they think that no one wants their dirty old T-shirts," McDaniel said. "Well, we want them. And we’ll pay you good money for them.”

To contact Single Stitch AZ and see its collection of vintage T-shirts, go to Instagram: www.instagram.com/singlestitch.az. The company also sells through a Depop app: @singlestitchaz.

A collection of vintage T-shirts is displayed in the garage of Jacob McDaniel, Cody Phillips, and Jake Fishel, owners of Single Stitch Vintage T-Shirts, on Thursday.

Jacob McDaniel (left), Cody Phillips (middle), and Jake Fishel (right) stand proudly in front of their collection of vintage T-shirts Thursday morning. The three young men collect and sell vintage tees from their home in Flagstaff and online at SingleStich.az.