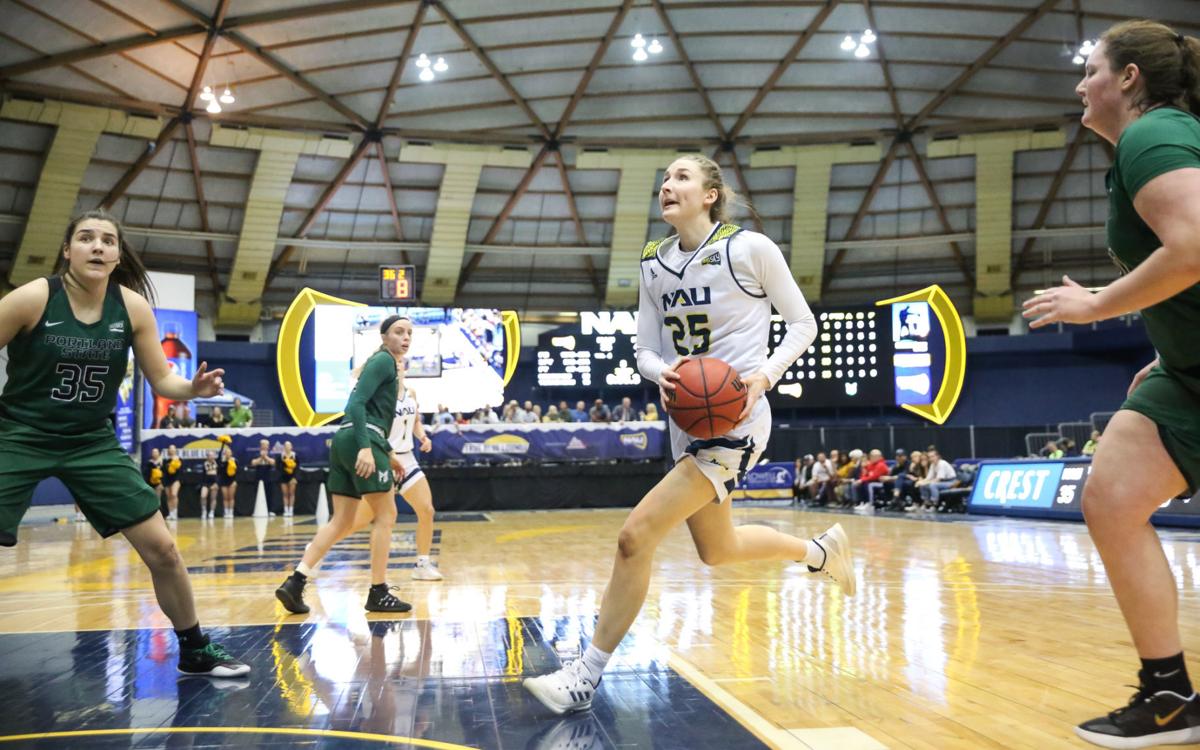 Northern Arizona forward Brianna Lehew (25) drives to the basket during a game last season against Portland State in the Walkup Skydome.

After playing in one game as a true freshman back in 2016, Brianna Lehew earned back a year of eligibility thanks to a redshirt from the NCAA.

As fate would have it, she ended up not needing it. The redshirt junior departed the Northern Arizona women's basketball team following this past season, having earned an opportunity she sought since arriving at the university.

Forgoing her final year of eligibility, Lehew will return home to Phoenix after she was selected as one of 45 students to begin NAU's occupational therapy doctorate program this fall.

"This is something that I've wanted and I vocally expressed to everyone. It was just such a weird dream that I've had, but I was happy it worked," Lehew said. "Everybody on my team has known that I've wanted to do this since I came to college, so it's exciting."

Not expecting to be selected for the occupational therapy program on her first try, Lehew figured applying for fall of 2020 would allow her to assure herself a spot in 2021. That decision came, however, without telling Lumberjacks head coach Loree Payne or her teammates.

"I kind of kept it secretive because I did have another year of eligibility for basketball, so I'm just going to apply this year so then I'm set for next year after I finish up my eligibility," Lehew said. "But then, I mean fortunately, I got in the first year."

"When I got the information back that I got in, I was of course ecstatic, but I also couldn't feel as happy as I wanted to just because I knew I had to tell my coaches and my teammates that I wouldn't be returning," Lehew added. "I kind of already established that if I got into OT school, then I wasn't going to come back. So going into it, I was so nervous. Obviously Loree's a very understanding person, but I just didn't know how she was going to react to me telling her."

Predictably, Payne and others around the program were thrilled at the news Lehew had to share. Consistently stressing the importance of academics, Payne oversaw a program in which all 15 players earned Golden Eagle awards and averaged a 3.75 GPA in the spring.

"It was actually really cute. She was nervous and when she came in I could tell her energy was off a little bit," Payne said. "I've said from day one that what we do is way bigger than basketball. If you have a superstar Big Sky Player of the Year, they might be able to go and play overseas, but they're not going to make a career out of playing basketball; it's just not reality for women right now in professional athletics.

"So for me, I've always preached that, yes, basketball is a huge part of what you're doing here, but you have to be able to do something with the degree that you're going to get while you're here," Payne added.

Even before Payne and her staff were informed, Lehew told one of her closest friends on the team, Caitlin Malvar.

"I had told her first over pretty much everyone; I think she is like one of my first phone calls," Lehew said. "She was very, very happy for me, but she was also upset. It's just inevitable because she expected to have another year with me and same with a lot of other teammates. But at the same time, they were very understanding, like the coaches, and they were very happy for me."

With NAU finishing above .500 for the first time in a decade and the 16 victories from 2019-20 season well ahead of the 9-21 record from Lehew's first season, Payne said she could understand the difficulty of the choice facing the senior forward.

"For her to have such an incredible opportunity, it's one that I know she was conflicted about because just with where our program is headed," Payne said. "Having turned that corner and really putting ourselves in a position to get to have a championship program, I think it was tough for her because she had been a part of when it wasn't so great."

However, Lehew made clear just how long she had been waiting to pursue this career path.

Lehew said the inspiration for pursuing occupational therapy extended back to a few different reasons. For one, Lehew's mother works in the medical field, first as a nurse and now as a chiropractor, leading her to want to help people in a similar fashion.

Secondly, a torn ACL in high school led Lehew to experience the work first-hand, with an occupational therapist present at her physical therapy program. After shadowing at the practice, Lehew knew it was something to pursue once she reached NAU and finished her undergraduate program.

"Going forward I'm not sure who I want to work with. I have shadowed with children; I don't know if that's my calling. I just don't know if I have the creativity or patience for them," Lehew said laughing. "I obviously love athletes and so that might be something that I'd be interested in, but going forward I'm just going into it with an open mindset."

For Payne and her staff, Lehew is just the beginning of something that she hopes will continue in the future.

"Basketball can be your life, but it's also just a stepping stone for some. For me, academics was a huge priority," Lehew said. "It is for a lot of other people, but they knew that for me there is more to life than just basketball. Same for all of my other teammates, so they're very understanding of that aspect."

Payne praised Lehew for making a forward-thinking decision, something she hopes all players in the program would be able to do if faced with a similar situation.

"I feel like it is an important piece for our program to have our players feel valued and feel empowered to make those life-altering decisions and make those decisions even when it's tough." Payne said.

In addition to Lehew, seven other Lumberjacks landed on the Big Sky Conference's All-Academic team. Among them were all five starters (Jacey Bailey, Caitlin Malvar, Lauren Orndoff, Nina Radford and Khiarica Rasheed), seniors Lehew and Peyton Carroll, who earned their bachelor's degrees this spring, and freshman Emily Rodabaugh.

The team's majors range from criminal justice to marketing to educational leadership, offering a diverse set of interests on a roster whose work is a point of pride for the staff.

"That's something that we take into consideration when we are recruiting. One of the things that I don't want to be is a babysitter when it comes to class," Payne said. "We have too many other things to focus on if you're going to class or not... At the end of the day, that's what they are going to have to utilize when they're looking for jobs and going to pursue different careers. It's that degree that they're going to fall back on and we just want them to take that as serious as their on-court experiences."

Paris may use flying taxies during the 2024 Olympic games

Paris may use flying taxies during the 2024 Olympic games

Biden: New variant cause for concern, 'not panic'

Biden: New variant cause for concern, 'not panic'

Northern Arizona forward Brianna Lehew (25) drives to the basket during a game last season against Portland State in the Walkup Skydome.