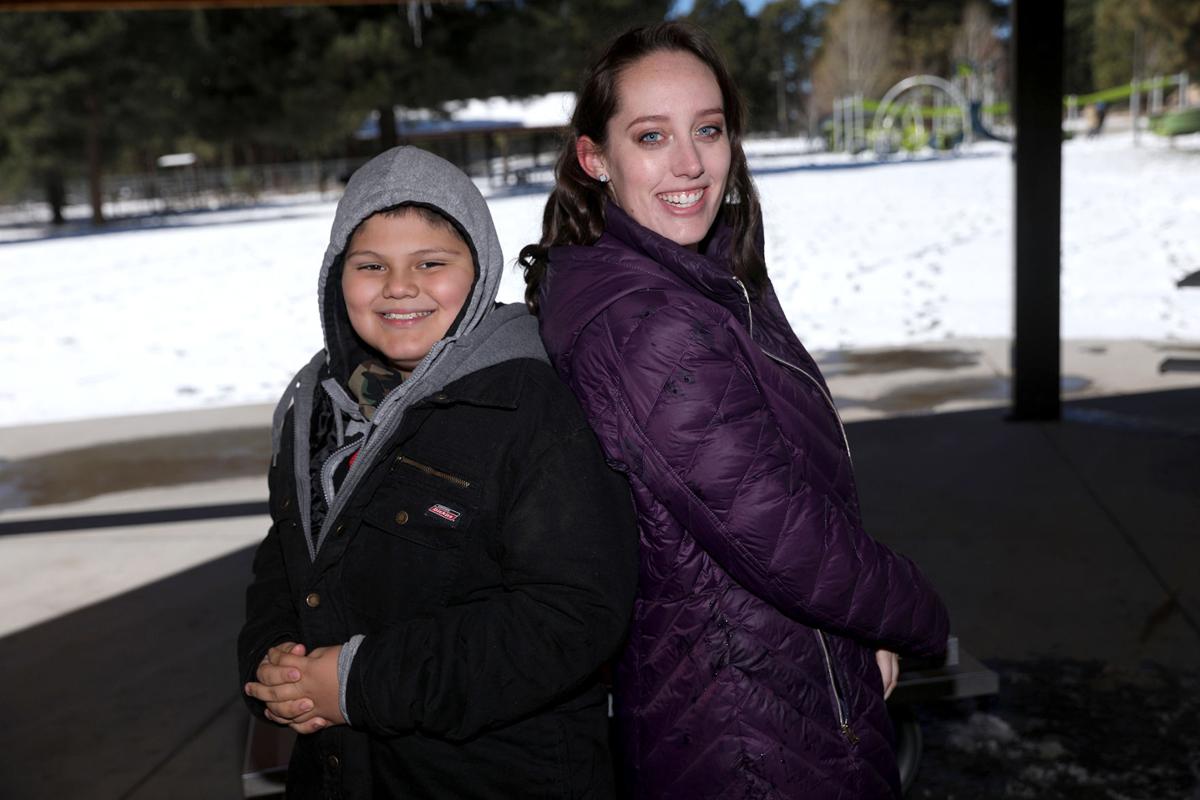 Hannah Gish and her "Little," Chris Barrera, 9, have been paired for just over two years. They have had to modify how they hang out during the COVID-19 pandemic. 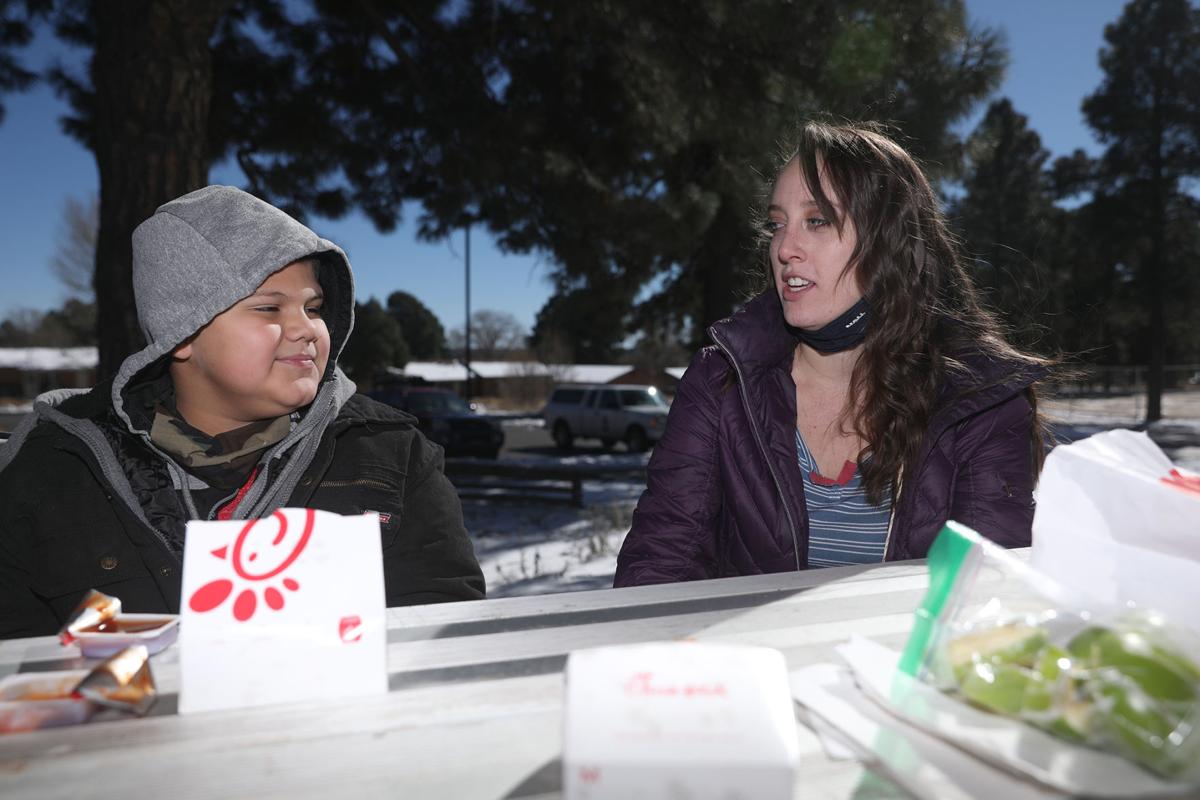 Hannah Gish and her "Little," Chris Barrera, 9, have been paired for just over two years. They have had to modify how they spend time together during the pandemic.

Having a Big is much like having a friend at school — except they can drive, says Chris Barrera, 9, a participant in Big Brothers Big Sisters of Flagstaff’s community-based mentoring program.

The local charitable organization operates on the idea that every child needs such support. Since it was established in 1967, it has been connecting children ages 6 through 18 with adults who can act not just as mentors but also as friends to these young community members as they progress through life’s challenges, including, most recently, a global pandemic.

“We are the only mentoring organization in Flagstaff and so we’re really unique in that regard,” said program director Claire Halligan, who explained that Big Brothers Big Sisters of Flagstaff (BBBSF) programs are evidence-based in their ability to reduce kids’ use of drugs and alcohol while improving their performance in school and their personal relationships. “We pride ourselves a lot on the fact that it’s a really simple concept: you just put a mentor in a child’s life and they will do better, which is kind of crazy to think about. But then we see it within our own families.”

There are currently about 50 matches between adult volunteers, aka “Bigs,” who spend a few hours each week with their “Little” for a variety of activities either hosted by the organization or of their own choosing, from outdoor sports to at-home cooking and visits to local businesses.

From March through September, though, as COVID-19 restrictions were at their height, these hangouts took on a different form, with matches scheduling phone calls, writing letters and participating in weekly activities hosted by videoconferencing, with the organization delivering any needed materials and supplies to Littles’ homes.

Halligan said some pairs transitioned to these remote meetings well, while others struggled to adapt mostly due to a lack of technology -- which was reported by about half of the participating children. BBBSF has since received a few grants for technology and is in the process of purchasing tablets and internet hot spots for those who need them.

Jennifer Buz, a researcher in Northern Arizona University’s Department of Astronomy and Planetary Sciences, admitted it was a challenge to connect with her Little, Laura, 10, early on in the pandemic because she did not have a device of her own to digitize meetings they would normally hold at the park, the library or other local venues like the Jay Lively Activity Center. Instead, they attempted to communicate though phone calls and texts to one of Laura’s family member’s phones.

But even then, Laura was shy.

They eventually discovered they connected well through online games such as bowling simulators, and now that Laura has her own device, she and Buz are able to stay in contact more often.

“Whereas before it was a very consistent, once-a-week meeting, but between those meetings there wasn’t much contact, now we have a more fluid relationship,” Buz said. “I still see her but our in-between time is a little bit more casual, where I can message her and she can message me. There’s a little bit more constant communication.”

In October, the organization began allowing some in-person meetings again, requiring that Bigs and Littles do so outside, while distancing and wearing masks to follow COVID-19 health safety guidance.

Chris and his Big, Hannah Gish, an education student at NAU, had no problem adapting to the few months of virtual meetings, though, a habit they had already developed over the last two years when Gish returned to Phoenix in the summers. Their match began through the BBBSF school-based mentoring program, where they met once a week after school, and though Chris was shy at first, they eventually got along so well that a year later they transitioned to the community mentoring to spend time together.

Now they meet every Tuesday, usually after school or during Chris’ lunch break from virtual classes, to eat lunch, play on the slides and zip line at Bushmaster Park or participate in one of BBBSF’s online activities.

“It’s fun that you get to have a friend and play around,” Chris said of having a Big. His favorite activity to do with Gish is laser tag, which recently reopened. They had the facility to themselves for their latest game.

Gish’s dad was a Big at another Big Brothers Big Sisters location in the 1990s, and she said his longstanding friendship with his own Little inspired her to seek that same community involvement.

“I’m an only child, so I never knew what it was like to have a little brother,” she said, explaining that her favorite part of the program has been getting to know Chris. “And just getting to take him out of his house and take him somewhere special and try new things. I don’t go to the laser tag or the park by myself, so I get to do them with Chris. I have an excuse to go play.”

She said the experience has also been good preparation for becoming a teacher, especially because Chris is currently in fourth grade, the grade Gish wants to teach after she graduates in the spring.

“It helps me as a future teacher; just get to know what kids are about, rather than seeing them at surface level,” Gish said. “I won’t get this relationship with every student that I have, so it’s nice to learn to develop relationships like this.”

Halligan said BBBSF’s biggest challenge, both before and during the pandemic, is finding enough volunteers. The organization always has a waiting list of about 50 children, especially boys, who are waiting to be matched with adult volunteers.

“Now with us not being able to get out into the community it’s even more of a challenge, so just trying to navigate how do we connect with people to let them know hey, we are here, we have kids waiting for a person to spend time with them, is always a challenge, for sure,” she said

Fortunately, BBBSF has been seeing some increased interest in volunteering as a result of its new weekly virtual info sessions, which happen Wednesdays at 11 a.m., 2 p.m. and 5:30 p.m. In the last few months, the organization has had about 20 interested volunteers.

Participation in the community mentoring program requires at least a year commitment. Although the school-based mentoring program is not currently enrolling new volunteers, BBBSF’s third program, Step Up, is. This program serves teens who have had some involvement with the Juvenile Justice System and is currently holding all its activities virtually.

“Kids just really need to be connected. They’re at home, they’re doing virtual learning at home either by themselves or with siblings, or they’re only with their parents and they’re not able to get out and do things like they used to do,” Halligan said. “And so kids are really needing someone in their corner and mentors are a great opportunity for the community to connect with kids.”

As a Big herself, Buz said now is an ideal time for any interested volunteers to join because of the flexibility of virtual meetings as a result of the pandemic. She became a Big about a year ago because she was interested in getting more involved in the community and seeing through Laura’s eyes what it is like to be a kid growing up in Flagstaff.

“I love getting to know her, being a part of her life in a way that, I think, is almost entirely a fun and positive thing. I get to do lots of fun things and she has a great time,” Buz said. “She just appreciates all the time I give her, and she has so much fun it’s hard for me to not to feel happy after.”

High Country Running: Run for the Littles and Bigs

In what seems like an eternity ago, I was scrambling to reschedule the Flagstaff running events calendar. At the beginning of the pandemic, I …

In honor of National Mentoring Month this month, Big Brothers Big Sisters of Flagstaff (BBBSF) is asking people in Flagstaff and Williams to b…

Catholic Charities’ Juniper House has become even more like a home through help from a local teenager and community members.

Girls on the Run of Northern Arizona virtual celebration Nov. 14

Three-year-old Zaaditozhon (“Zaadii”) Tso knew he was a superhero. He even had the cape to prove it.

Cooking supplies. Lab equipment. Furniture. When Flagstaff educators Taylor Doren, Tom Talasek and Leah Claypool were asked to share their classroom wish, these are the things they asked for — and what they will be able to purchase using $2,500 in grant funding they were each awarded last week.

Hannah Gish and her "Little," Chris Barrera, 9, have been paired for just over two years. They have had to modify how they hang out during the COVID-19 pandemic.

Hannah Gish and her "Little," Chris Barrera, 9, have been paired for just over two years. They have had to modify how they spend time together during the pandemic.