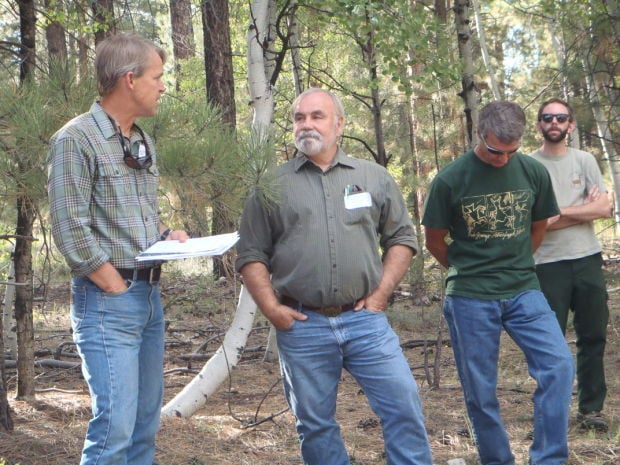 Tom Sisk, right, of Northern Arizona University's Landscape Conservation Initiative, talks with Randall Walker, center, North Kaibab District ranger during a trip to the Kaibab Plateau in September. The two were part of a stakeholder group that developed a restoration plan for 28,000 acres of mostly ponderosa pine forest on the plateau. The process has been "an interesting and sort of novel story," Sisk said. 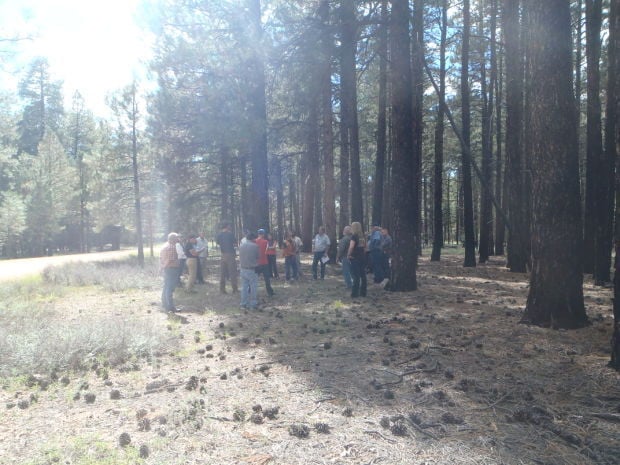 A group of stakeholders that included forest managers, fish and wildlife managers, sportsmen and private citizens met in September to develop a restoration plan for 28,000 acres on the Kaibab Plateau. The project mimics the massive Four Forest Restoration Initiative but on a smaller, quicker scale.

Tom Sisk, right, of Northern Arizona University's Landscape Conservation Initiative, talks with Randall Walker, center, North Kaibab District ranger during a trip to the Kaibab Plateau in September. The two were part of a stakeholder group that developed a restoration plan for 28,000 acres of mostly ponderosa pine forest on the plateau. The process has been "an interesting and sort of novel story," Sisk said.

A group of stakeholders that included forest managers, fish and wildlife managers, sportsmen and private citizens met in September to develop a restoration plan for 28,000 acres on the Kaibab Plateau. The project mimics the massive Four Forest Restoration Initiative but on a smaller, quicker scale.

For more than a century, the Kaibab Plateau north of the Grand Canyon has enthralled those who wander through its wide stretches of grasslands, sweeping forests and plunging canyons.

In 1882, explorer Clarence Dutton recounted his trips on the plateau, saying, “We, who through successive summers have wandered through its forests and parks, have come to regard it as the most enchanting region it has ever been our privilege to visit.”

The goal of preserving the ponderosa pine forests that so awed Dutton is driving a new forest restoration project planned for 28,000 acres of the Kaibab Plateau. The project, called the Burnt Corral Vegetation Management Plan, is one of a few  efforts on the Kaibab National Forest to create forest restoration plans and projects with a new level of dedication to stakeholder input.

And while pursuing the same goals as the Four Forest Restoration Initiative, it does so in an entirely different manner, said Tom Sisk, director of Northern Arizona University’s Landscape Conservation Initiative, which helped facilitate much of the recent collaborative work.

“If 4FRI was the whole enchilada, North Kaibab is taking small bites trying to get it right the first time,” Sisk said. “Suddenly with an approach of taking a bunch of small bites you end up with a whole landscape approach.”

Before it became part of the Kaibab National Forest, most of the plateau north of the Colorado River was included in Grand Canyon preservation areas created by presidents Benjamin Harrison and Theodore Roosevelt around the turn of the 20th century.

Thanks to its relative isolation that saved it from extensive railroad logging, the ponderosa pine-covered plateau contains rare enclaves of old-growth forest. Historically, the north Kaibab is a more productive area than other forests in northern Arizona, said Alicyn Gitlin, with the Sierra Club’s Grand Canyon Chapter. The area hosts populations of northern goshawk and the unique Kaibab squirrel and provides Mexican spotted owl habitat.

“The North Kaibab has been recognized for a long time as being a really special landscape and a really amazing habitat,” Gitlin said. “It has a long history of people trying to protect it.”

It was in June 2009 that a broad group, including Forest Service representatives, game managers, researchers and environmentalists, came together to create the precursor to the Burnt Corral project, called the Kaibab Forest Health Focus. The effort was meant to create a plan that would guide future projects to restore forest health, reduce fire hazard and improve wildlife habitat. In it, the group designated 280,000 acres of high priority areas across the Kaibab National Forest, including the Burnt Corral area.

The Burnt Corral project is the first to come out of the Forest Health Focus and has many of the same elements as other forest restoration projects. It proposes to mechanically thin up to about 15,000 acres and use wildland fire alone or in conjunction with mechanical treatment on up to about 28,000 acres with accommodations for things like steep slopes and northern goshawk nest areas. The large-tree retention strategy in the Burnt Corral proposal was based on the one laid out in the 4FRI project, said Sasha Stortz, a senior research specialist at the Landscape Conservation Initiative who was also involved in the project.

What makes the Burnt Corral project notable is the level of collaboration used to produce the proposed action that is now going out for public comment, said those involved in the process. It represents a new direction for the Forest Service, said Randall Walker, District Ranger on the North Kaibab Ranger District.

Usually the Forest Service develops a proposed action and then tries to reach out to the public for feedback, instead of getting stakeholder input in the first step of the process, Walker said.

Burnt Corral represents a trend by the Forest Service across the West to engage the public, address issues, find common ground and pursue compromise earlier in the process versus moving forward, then running into litigation later on, which has defined forest management for past 20 years, Sisk said.

He called the past several years of work on the Kaibab “an interesting and sort of novel story.”

But the mutual agreement and collaboration that the Forest Service is hoping for on the Kaibab has its limits, said two environmental groups who participated in stakeholder meetings last fall.

“I think (the Forest Service) is underestimating the ability for the community to all get on the same page,” said Katie Davis, public lands campaigner for the Center for Biological Diversity. There were fundamental disagreements in terms of approach to the project that couldn’t be solved in stakeholder meetings, she said.

“I think it's going to be a challenge for them moving forward,” she said.

The Center and the Sierra Club both voiced concerns about preservation of large and old trees and the use of logging or thinning rather than fire as the primary means of restoration.

Despite some concerns, Stortz pointed to the 4FRI process as reason to hope that a compromise could be achieved.

“The Kaibab opening their doors early in this process presented a new opportunity and potential good faith gesture that is important groundwork,” she said.

South of the Burnt Corral Vegetation Management Plan, the Kaibab National Forest is starting on another restoration project, this one focusing on grasslands.

Over the past century, factors like grazing, fire exclusion, changes in wildlife and climate change have caused woody plants like juniper, pinyon and ponderosa pine to encroach on areas that were formerly grasslands.

The proposal for the project, which covers 550,000 acres south of the Grand Canyon, would involve mechanical thinning on about 150,000 acres according to initial estimates, prescribed fire and fuelwood harvest. The initial plan also proposes using herbicide to treat re-sprouting woody species, seeding native grasses, translocating native prairie dogs into the area and fence removal and modification.

The restoration work aims to improve wildlife habitat, support the historic fire regimes and improve soils and watersheds, among other goals.

The U.S. Forest Service is seeking public comment on both the Burnt Corral and the South Zone projects.

The Burnt Corral Vegetation Management Plan is available at http://www.fs.fed.us/nepa/nepa_project_exp.php?project=44236. Comments on the project may be emailed to comments-southwestern-kaibab-north-kaibab@fs.fed.us. Include “Burnt Corral Project” in the subject line of the email for easy identification. The comment period closes April 17.

A week after the Coconino National Forest made the same move, officials on the Kaibab National Forest have increased fire danger on much of the forest from low to moderate. The call was made April 7 for areas south of the Grand Canyon, including the Williams and Tusayan ranger districts as well as the South Rim of Grand Canyon National Park.

The North Kaibab Ranger District and the North Rim of the national park remain at low fire danger because they had higher snowpack levels that are melting more slowly, said Holly Kleindienst, deputy fire staff officer for the Kaibab National Forest.

“Right now at this time of year typically our indices start to rise because the days getting longer, it’s getting warmer and we’re starting to get windy days as well,” Kleindienst said. “The combination of those three factors is causing the fire danger indices to rise.”

If current weather conditions continue, Kleindienst said the national forest could start implementing fire restrictions in the first or second week of May. Last year, the first restrictions went on in mid-April.

Kleindienst emphasized that now is the time for homeowners to clear vegetation away from homes in anticipation of fire season. So far this year, the Kaibab National Forest has logged three very small fires, she said.

“If 4FRI was the whole enchilada, North Kaibab is taking small bites trying to get it right the first time. Suddenly with an approach of taking a bunch of small bites you end up with a whole landscape approach.”