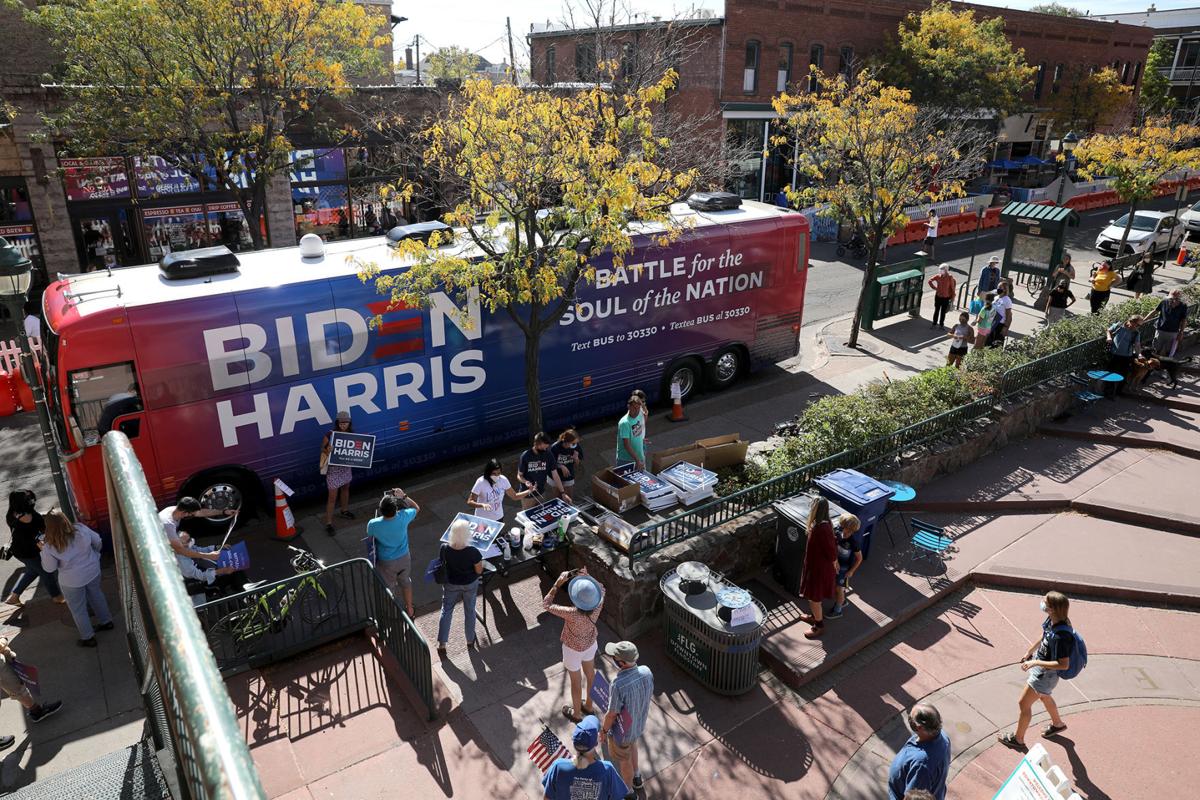 People line up in Heritage Square on Wednesday afternoon to pick up yard signs and take a picture in front of the Biden-Harris bus. There were no speakers running for office at the event. 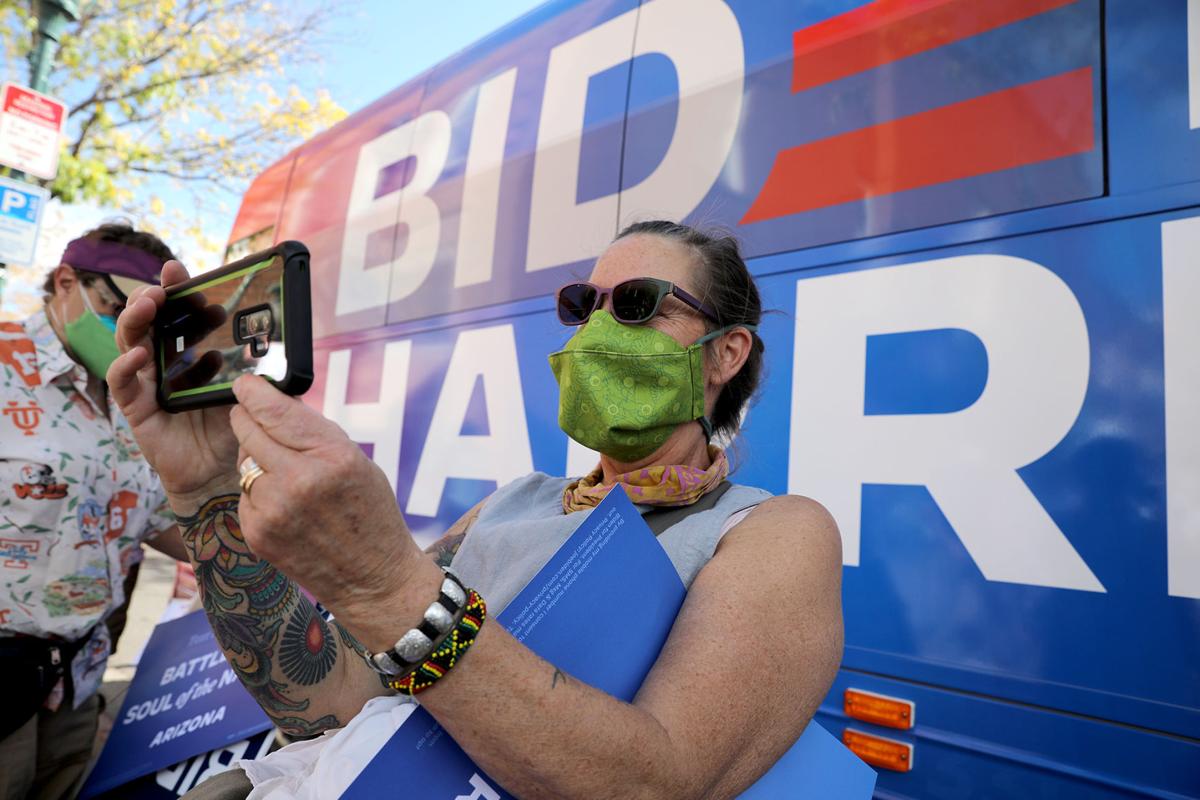 Laura Anne Chapman takes a selfie in front of the Biden-Harris bus Wednesday afternoon in Heritage Square in downtown Flagstaff. 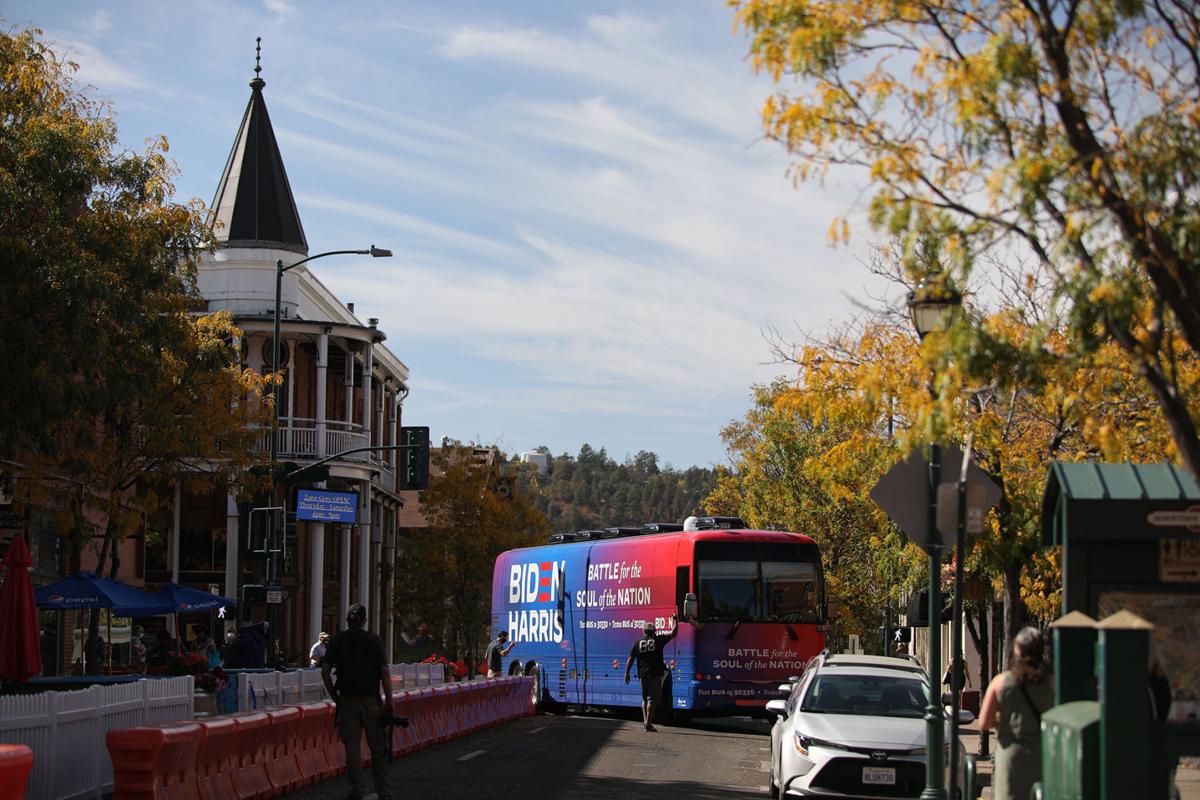 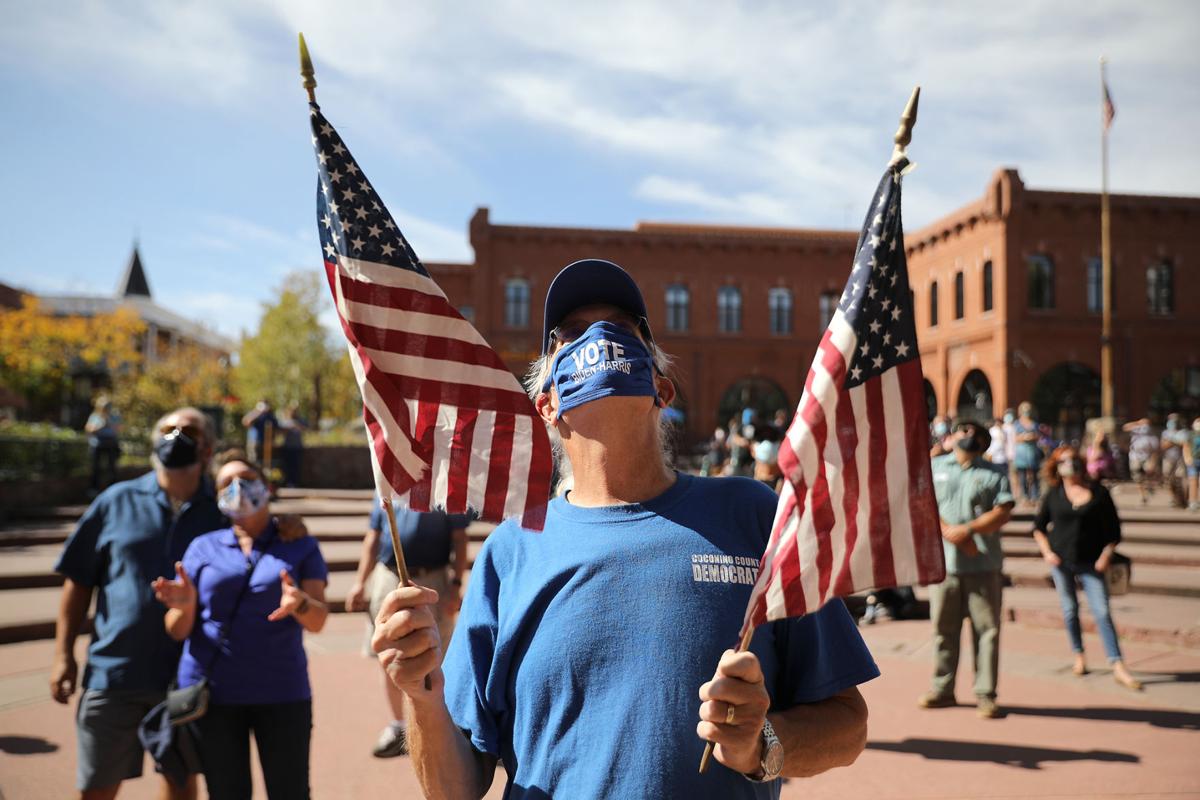 Bill Wade listens to news on when the Biden-Harris bus will arrive for an event in Heritage Square Wednesday afternoon. 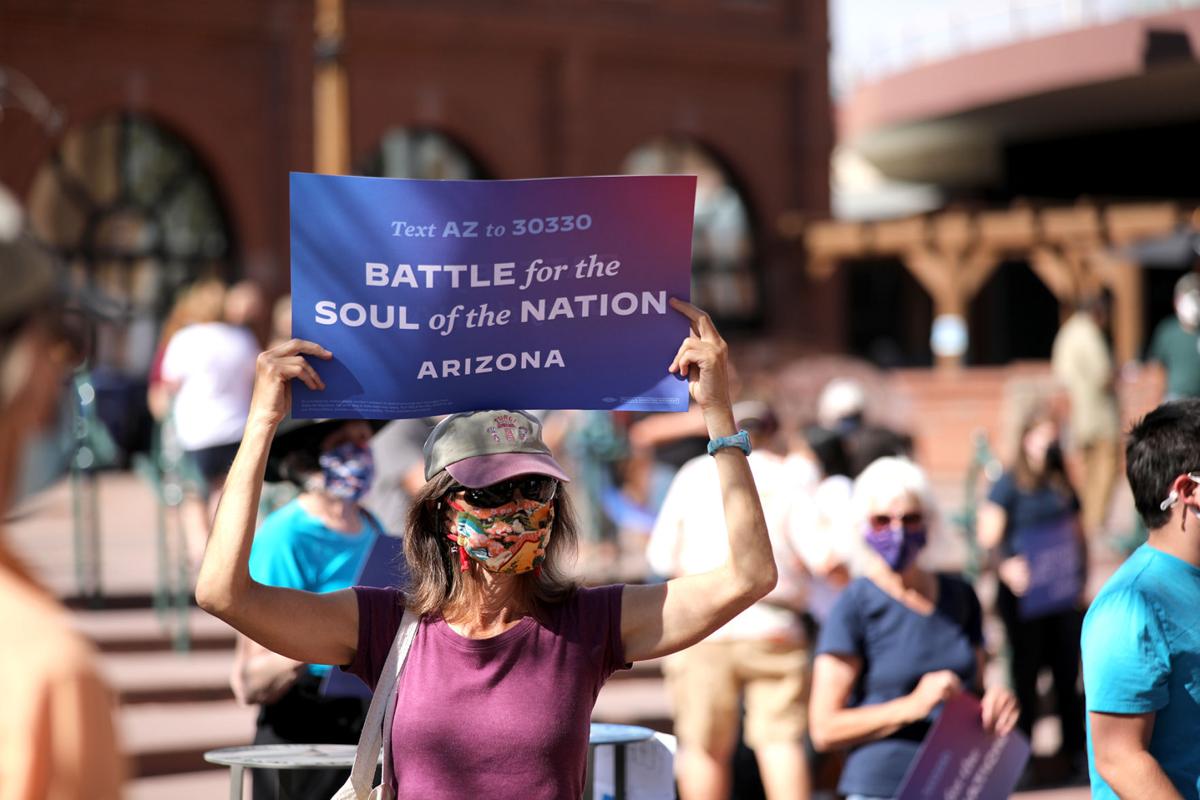 Supporters of Joe Biden and Kamala Harris waited in Heritage Square Wednesday to collect yard signs and see the Biden-Harris bus as it made a stop in Flagstaff.

Although neither former Vice President Joe Biden or running mate Senator Kamala Harris attended the event, the stop represented the first on-the-ground event the Biden campaign has held in Flagstaff this year.

That is in stark contrast to the Republicans, who have held several events and rallies in the city, as well as knocking on doors. Indeed, President Donald Trump himself had also planned to campaign in Flagstaff this week until he tested positive for COVID-19 last Thursday night.

Biden and Harris will be campaigning for the first time this election cycle in Arizona today, making several stops in Phoenix and Tempe where they will be speaking with supporters and meeting with tribal leaders.

At the Flagstaff event, which brought out nearly 100 supporters who gathered in Heritage Square, volunteers and staff handed out yard and window signs.

Coconino County Treasurer and Democrat Sarah Benatar also spoke to the crowd and emphasized the importance of voting and voting early.

Benatar called Biden a more empathetic man who would follow the guidance of scientists when tackling issues such as the COVID-19 crisis.

“It has been hard for so many of us. I have lost family as young as 34 years old to coronavirus. It is very upsetting that we have a president who doesn’t care. We need Joe Biden in the White House; we need Kamala Harris in the White House; we need Mark Kelly in the senate; we need to turn all of our local races blue,” Benatar told supporters. “They believe in the science. In Arizona, our voices, our votes, are so important.”

For many of those who showed up to the event, all of whom wore masks, the issue of COVID-19 was also top of mind.

That was the case for retired medical professional Joe Magee, who said he has been disturbed by the way the Trump administration has handled the pandemic.

Magee said throughout the crisis, he has volunteered to help medical providers in Tuba City and the severity of the crisis has been plain to see.

“I have definitely seen really sick people and, at the beginning of this, I was outraged at the misinformation that the president has [spread],” Magee said. “It’s very disturbing to see so many people dying and their families and their children dying and to have our president undervalue things like social distancing, the poor messaging he has given has destroyed the economy of this country. If we had good messaging, our economy would be doing much better.”

Magee said he considers himself a moderate and has voted for both Republican and Democratic candidates over the years, but this time, he felt the only choice was a vote against the current president. Magee added that even though he does not support all his policies, he would vote for former candidate Bernie Sanders rather than President Trump.

Flagstaff resident Jackie Bell also said she would have voted for Sanders if he was on the ballot. That's who she supported in the Democratic Primary earlier this year, but she said she now fully supports Biden.

Although he is perhaps not as left-wing as she would like, Bell said she recognizes that Biden is trying to attract as many moderate and even Republican voters away from Trump as he can.

Meanwhile, the Trump campaign has portrayed Biden as being controlled by the radical left.

But Bell said she is worried. Given how depressing the result of the 2016 election was for her, this time around she said she is “really nervous.”

Still, Bell said she plans to vote early, likely casting her ballot in a drop box rather than mailing it.

McSally, Ward and Shedd make the case for Republicans in Flagstaff

With shouts of “four more years,” and “make America great again,” about 50 supporters of President Donald Trump crowded into the Flagstaff Rep…

After President Donald Trump announced on Twitter that he and the First Lady had tested positive for COVID-19, it appears the president’s sche…

With some calling it ground zero in determining which party will control the state Legislature next year, two veterans are vying to represent …

The president may not have made it to northern Arizona this election season, but it appears his eldest son will.

People line up in Heritage Square on Wednesday afternoon to pick up yard signs and take a picture in front of the Biden-Harris bus. There were no speakers running for office at the event.

Laura Anne Chapman takes a selfie in front of the Biden-Harris bus Wednesday afternoon in Heritage Square in downtown Flagstaff.

Bill Wade listens to news on when the Biden-Harris bus will arrive for an event in Heritage Square Wednesday afternoon.

Supporters of Joe Biden and Kamala Harris waited in Heritage Square Wednesday to collect yard signs and see the Biden-Harris bus as it made a stop in Flagstaff.