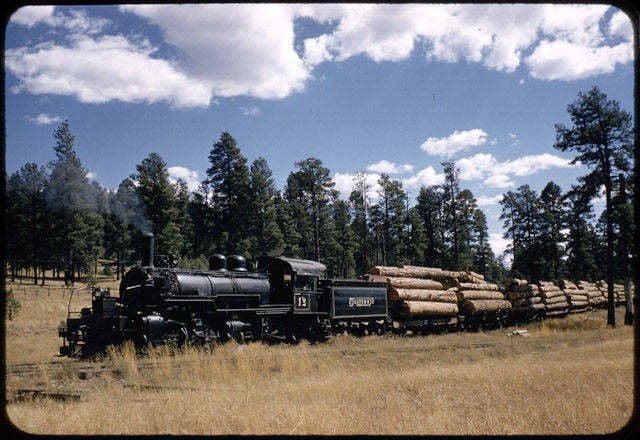 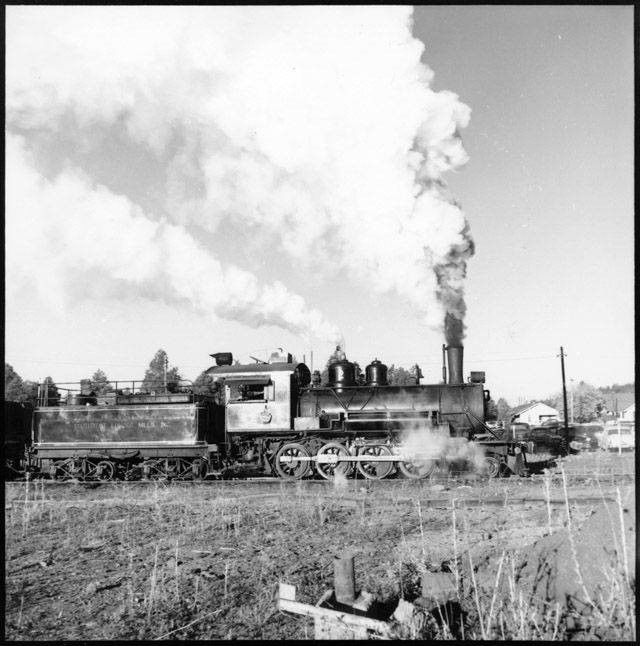 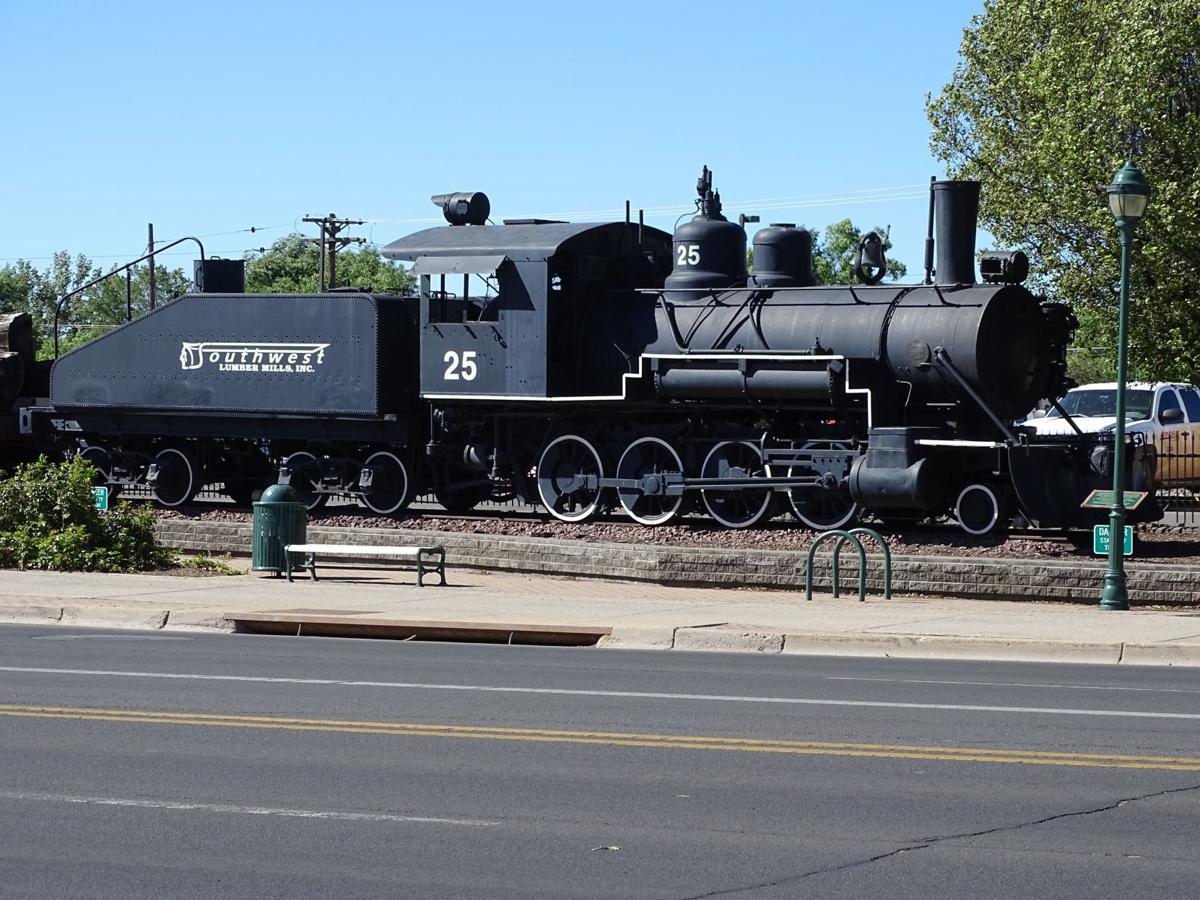 An elevated grade along the East Newman line.

Wednesday morning my energetic border collie, Solie, got me out for some fresh air. Walking near our quaint little community of Mountainaire, we happened upon an old railroad bed and I pondered why it was there and how old it might be.

That Friday when returning to do more railroad inspection, I even found myself whistling, “I’ve been working on the railroad.” The things we do to entertain ourselves these days.

I examined a few old railroad spikes and followed the old railroad grade, which led us over to Clarks Valley (Lake Mary). Forest thinning had just been completed; I counted the tree rings on a freshly cut stump from the center of the old railroad bed. I quickly counted well over 90 tree rings.

We walked back home and I started my investigation. I came to the conclusion that it was the remains of the old Central Arizona Railroad and served as its main line that operated from 1916 to 1923. This section was the Dewey Grade that connected the Arizona Lumber and Timber Company's Clark Valley sawmill to Flagstaff and to the Atlantic and Pacific Railroad.

Eddy’s vision of a rail line connecting the southern Arizona mining and northern Arizona timber industries was in shambles. The winning bidders offered $40,440 for the railroad and $895 for the locomotive and rolling stock. This was the official end of the Arizona Mineral Belt Railroad but the beginning of the Central Arizona Railroad. This railroad consisted of one Baldwin 4-4-0 “American type" locomotive, six rail cars, one depot, a pump house and a repair shop just south of Mormon Mountain.

Denis Matthew ("Matt") Riordan had the same vision as Colonel Eddy: build a north-to-south rail line. Matt had even more motivation. In 1887 he purchased the Ayer Lumber Mill, changing the name to Arizona Lumber (later Lumber and Timber) Company. His plan was to use the railroad to transport logs to his mills and then ship timbers to the mining industries in southern Arizona. But by 1897, Matt lost hope of his grand north-to-south line and resigned as the company president to pursue other interests.

Matt's younger brothers, Timothy and Michael, bought out his interest in the company and Timothy became company president. The light at the end of the tunnel for the north-south Railroad Line was flickered out. That’s when it became “just a logging railroad”, but what a railroad it was!

The Central Arizona moved its rail lines many times over the years, setting up mobile logging camps in strategic locations in the forest.

You can see several sections of the old Central Arizona: the Oak Creek line as you drive Hwy 89 above the switchbacks, walk along it on the Flagstaff Urban Trail at Fort Tuthill, catch miles of the East Newman line along Old Munds Highway, get a glimpse of it at the south end of Mormon Lake, or gaze down upon the Mill Park line at Coconino County's Rogers Lake overlook.

Southwest Lumber continued to use the railroad until 1966, the last year a locomotive pulled a load of logs to the Southwest's Butler Avenue mill, ending over 80 years of steam locomotives chugging through the woods of northern Arizona.

Never was a passenger ticket sold (although there was a station), but certain Sundays when the logging operations were idle, folks could hop aboard the railroad for recreation.

One of those locomotives, Two Spot (No. 25) — a 1911 Baldwin locomotive purchased used in 1925 by the Central Arizona — is now parked downtown along old Railroad Avenue (now Historic Route 66). Locomotives like Two Spot would have steamed up the old grade Solie and I were walking on.

Richard McGaugh was born in Flagstaff Arizona, grew up in Fort Valley, and after a career with the City of Flagstaff, now takes on Roving Rangering and northern Arizona history.

Submit questions for the Ask a Ranger to askaranger@gmail.com.

Last week's Ask-a-Ranger column, "More than meets the eye on McMillan Mesa," by Wayne Ranney had an incorrect caption for the map that appeared in the June 25 print edition. Wayne's full column — with correct captions — can be viewed at https://azdailysun.com/news/local/ask-a-ranger-more-than-meets-the-eye-on-mcmillan-mesa/article_21498a9b-406e-5b8c-aab4-3936a3eaa945.html

Roving Ranger walks and campground talks continue to be on hiatus.

For detailed info on access to trails and facilities in the Flagstaff Area National Monuments, visit:

Arizona Snowbowl is open. Scenic Chairlift tickets must be purchased in advance online at Snowbowl.ski; be prepared for social/physical distancing measures during your visit. Roving Rangers will be offering interpretation at the base of the chairlift in the very near future.

An elevated grade along the East Newman line. 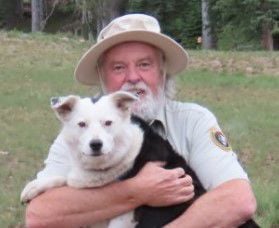