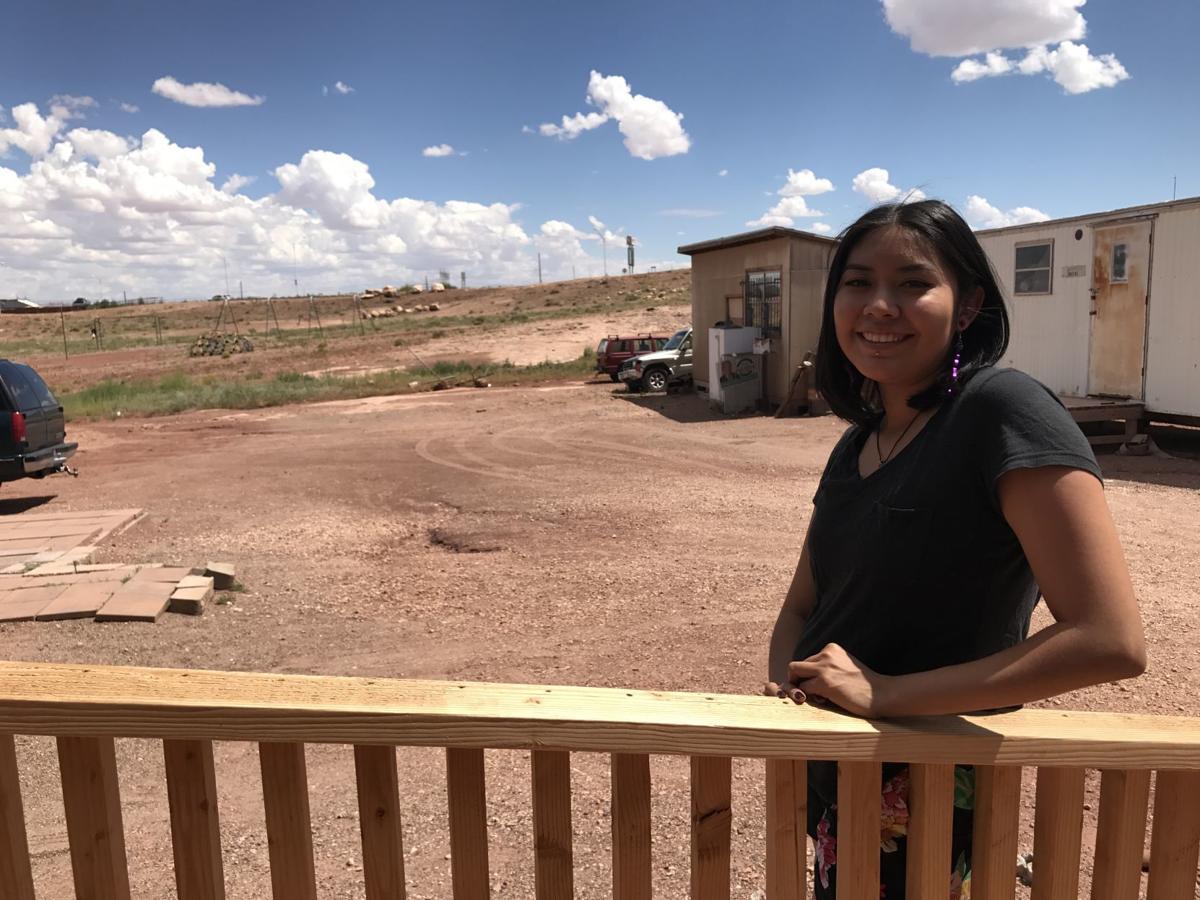 Jaime Butler, 16, stands outside her grandmother's home in Cameron. Butler, who grew up living on the Navajo Nation and in Flagstaff, is one of 21 plaintiffs in a federal lawsuit that aims to force the government to take action on climate change. During one particular stretch of drought on the Navajo Nation, Butler said her family had to sell their livestock when hauling water became too expensive. 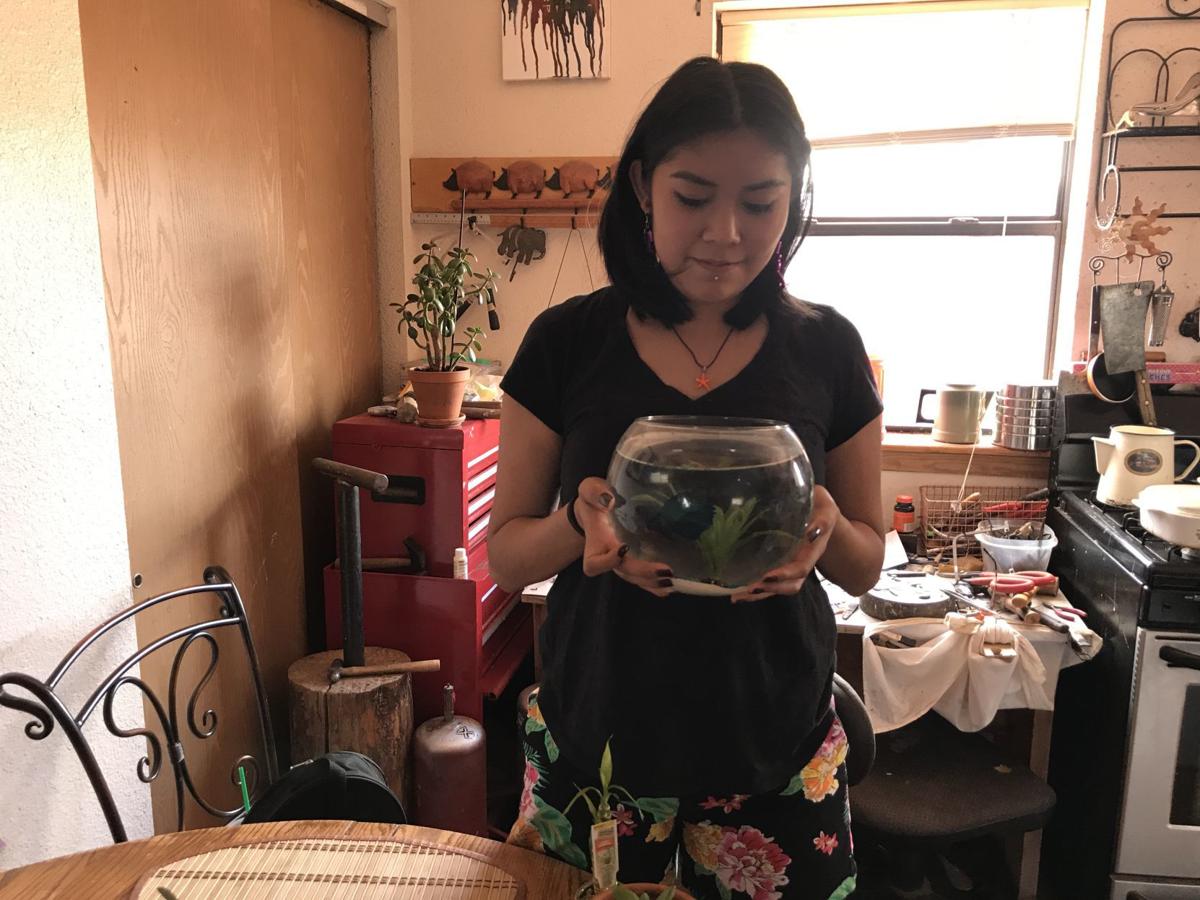 Jaime Butler holds her pet fish at her grandmother's home in Cameron. Butler, who grew up living on the Navajo Nation and in Flagstaff, is one of 21 plaintiffs in a federal lawsuit that aims to force the government to take action on climate change.

During a hot August afternoon last week, Jaime Butler sank into the couch at her grandmother's home in Cameron. She wore floral-patterned shorts, a starfish necklace and purple earrings in the shape of pinup girls that stood out against her short black hair.

She talked about racing to finish up the last of her summer reading, admitted to getting sucked into watching too many YouTube videos and showed off her collection of potted plants, her pet fish and her new puppy.

In other words, she looked and acted like a normal teenager.

But the 16-year-old is also one of 21 young people trying to make history with a lawsuit aiming to force the federal government to take action on climate change. The lawsuit claims that in promoting the burning of fossil fuels that cause global warming, the federal government has violated the “youngest generation’s constitutional rights to life, liberty and property,” according to Our Children’s Trust, the advocacy organization that provides legal and other support to the young plaintiffs.

As Butler, who is the only Navajo in the group and the only plaintiff from Arizona, put it, it’s about the right of her and her peers to a clean, livable environment.

“They are putting more stuff into the air and ruining our water and taking advantage of all the resources and ruining the environment while trying to support energy,” she said. "Even though there's a cleaner way to get energy now, they're still doing it."

If the case goes to trial in U.S. District Court in February as scheduled, the plaintiffs will face off against an administration that has made clear its open hostility to climate change action and has only done more to facilitate the fossil fuel development that is central to the case’s argument.

The Trump administration, like the Obama administration before it, also has made repeated attempts to block the climate lawsuit. In its latest move in June, the Justice Department filed a petition asking for an appeals court to immediately review, and potentially overturn, a judge’s decision in November to allow the case to go to trial. The Washington Post reported that the request, which could stop the case from proceeding, is “widely considered the ‘Hail Mary’ of legal procedures.”

As it stands now, the appeals court is considering the petition and has ordered a temporary stay on the lawsuit’s proceedings until further notice.

After two years of twists, turns, stops and starts in the high-profile case, Butler said she’s still glad to be involved and to be among those bringing climate change to the forefront.

“I feel like we are some of the people that are leading everyone else to start noticing it, noticing it is going to be a big deal and going to impact all of us in the future in some way,” Butler said. “I'm really happy that our group is just bringing more attention to it.”

Although she now goes to high school in Colorado, Butler grew up living on the Navajo Reservation and in the Flagstaff area. She spent fourth through eighth grade attending school in Flagstaff.

Butler said she agreed to join the Juliana v. United States case in large part because of encouragement from her mother, Jamescita Peshlakai. A Democratic state senator in Arizona, Peshlakai is vocal about the need for action on climate change. In 2011 she filed a lawsuit on behalf of Butler claiming that former Gov. Jan Brewer’s administration had an obligation to reduce greenhouse gases as part of its responsibility to protect the atmosphere. The state Court of Appeals threw out the claim in 2013.

Apart from the lawsuit, Butler had also started writing letters to former President Obama about the Arctic National Wildlife Refuge and then, in 2010, about the Gulf oil spill. After the sixth letter, Butler said Obama responded. Her mother must have told friends or posted the news on social media, Butler said, because the word spread and she was contacted by Our Children’s Trust.

When she was 11, the organization made a video that featured Butler speaking about climate change and the challenges of water access on the Navajo reservation. During one particular stretch of drought, she said her family had to sell their livestock when hauling water became too expensive.

After the video, Our Children’s Trust kept in touch and eventually looped back to ask about her joining the climate change lawsuit, Butler said.

So far, she said she hasn’t been asked to give formal testimony, but has attended conferences, been to media events and done other interviews.

“They want to make sure people understand we're real."

She said she does have emotional days when she gets freaked out and thinks the world is going to end. Last year, Butler said she had nightmares about it.

But what she thinks about more than a doomsday scenario is why people aren’t noticing how their own actions are causing climate damage.

“If we got to the point of where we couldn’t live because of ourselves, I think about that,” she said. “How can people completely ignore to what we're doing to the planet?”

She says the same thing about Trump.

"I don't understand how Trump doesn't see how climate change is a real thing," she said. "Pulling out of the climate accord made me so angry. Just because he wanted to do that doesn't mean he should have taken our whole country out."

Among the plaintiffs, Butler said her experience growing up in a traditional Navajo family gives her a unique perspective.

And even though she’s shy, she appreciates the importance of drawing more attention to the case.

“I want it to be a big deal so that a lot more people will see it and hear about it,” Butler said. “I want everyone to understand that little kids can do these big things to help our environment.”

Editor's note: This story was changed Aug. 30, 2017, to clarify that Jaime Butler is not part of a study monitoring her psychological health.

Jaime Butler, 16, stands outside her grandmother's home in Cameron. Butler, who grew up living on the Navajo Nation and in Flagstaff, is one of 21 plaintiffs in a federal lawsuit that aims to force the government to take action on climate change. During one particular stretch of drought on the Navajo Nation, Butler said her family had to sell their livestock when hauling water became too expensive.

Jaime Butler holds her pet fish at her grandmother's home in Cameron. Butler, who grew up living on the Navajo Nation and in Flagstaff, is one of 21 plaintiffs in a federal lawsuit that aims to force the government to take action on climate change.