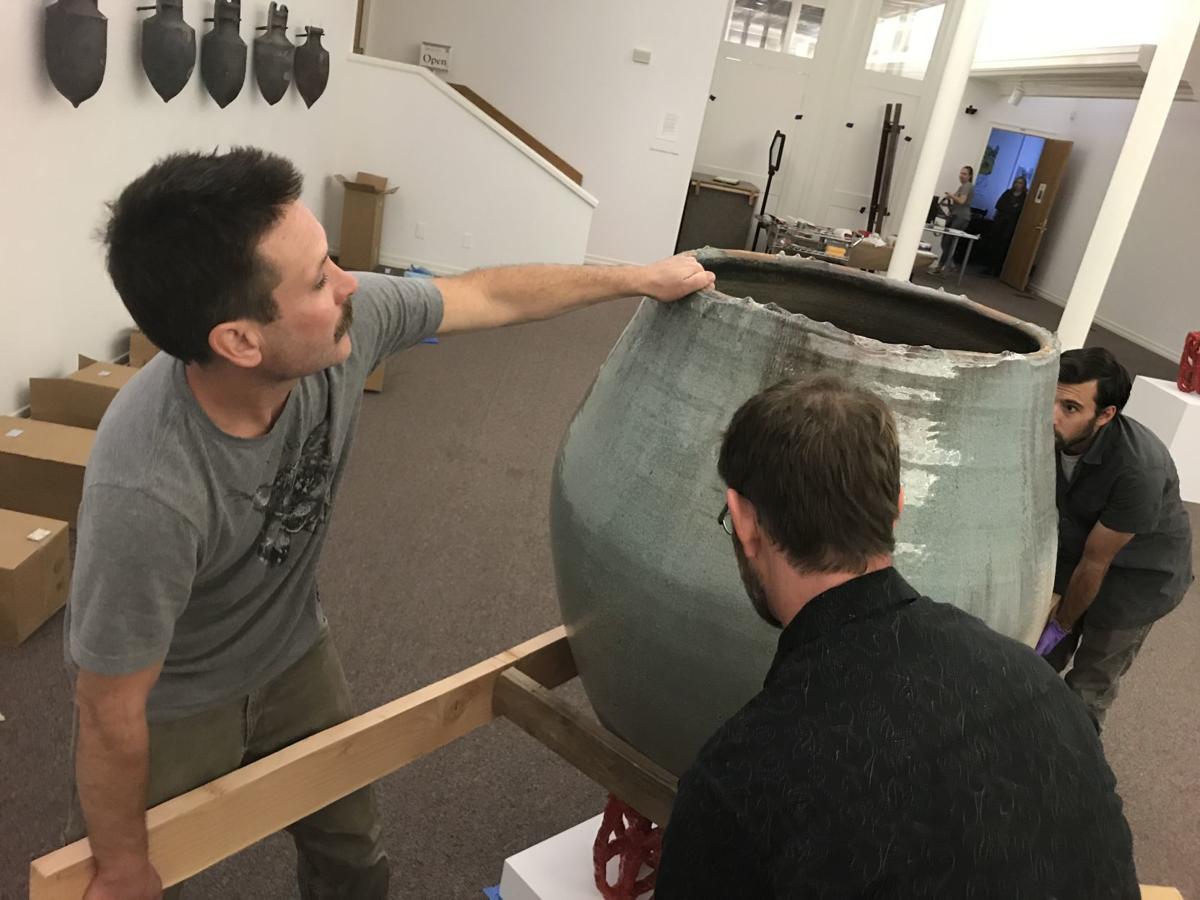 Marshall Maude, left, adjusts one of his pots in a series titled "These Vessels Hold" ahead of the "Return" exhibit's opening reception on Thursday. 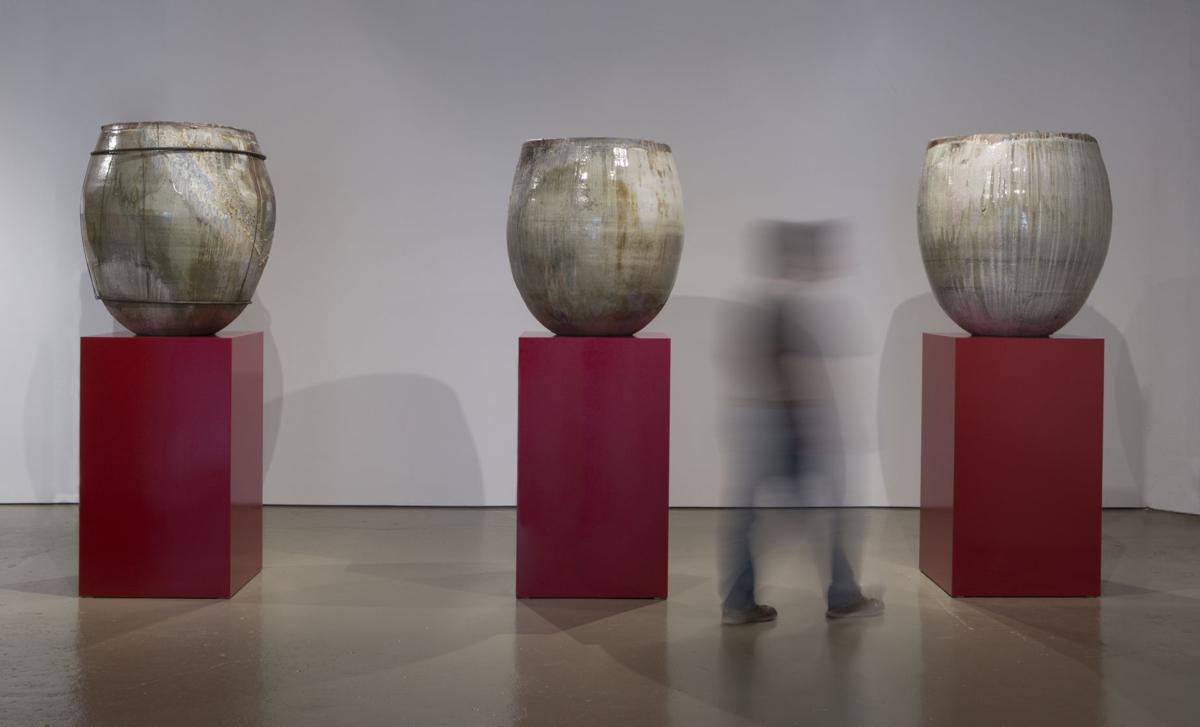 These Vessels Hold, by Marshall Maude. 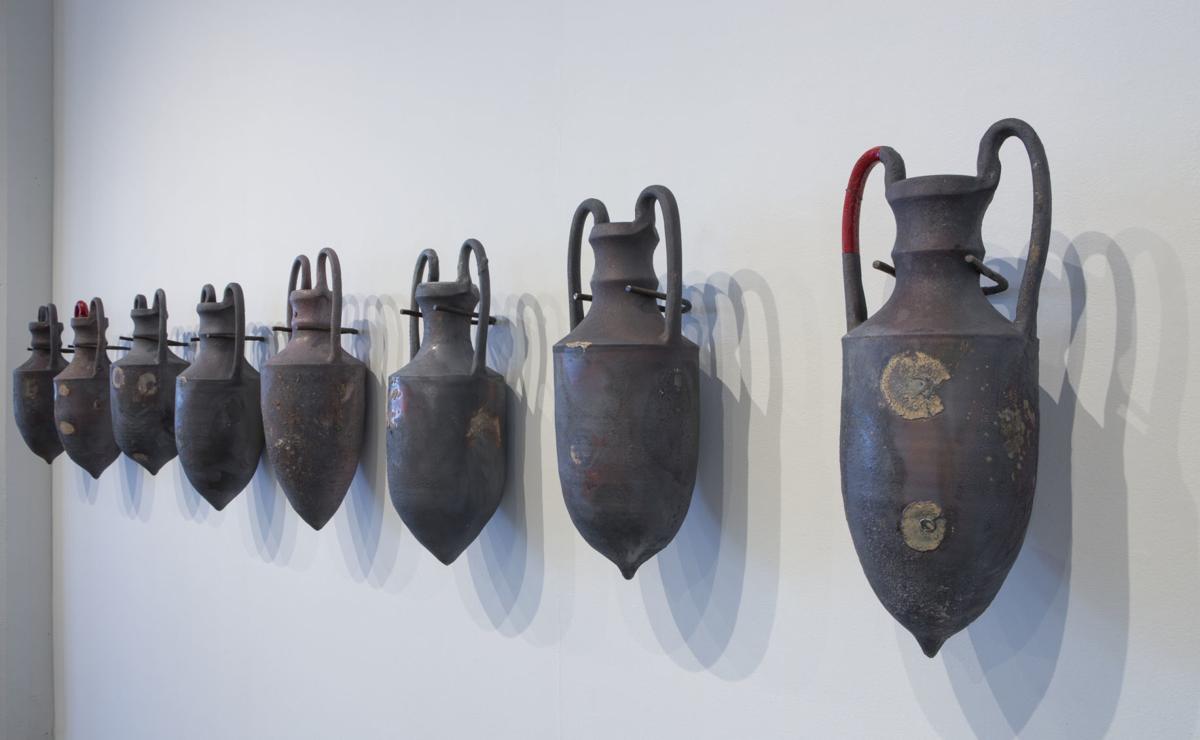 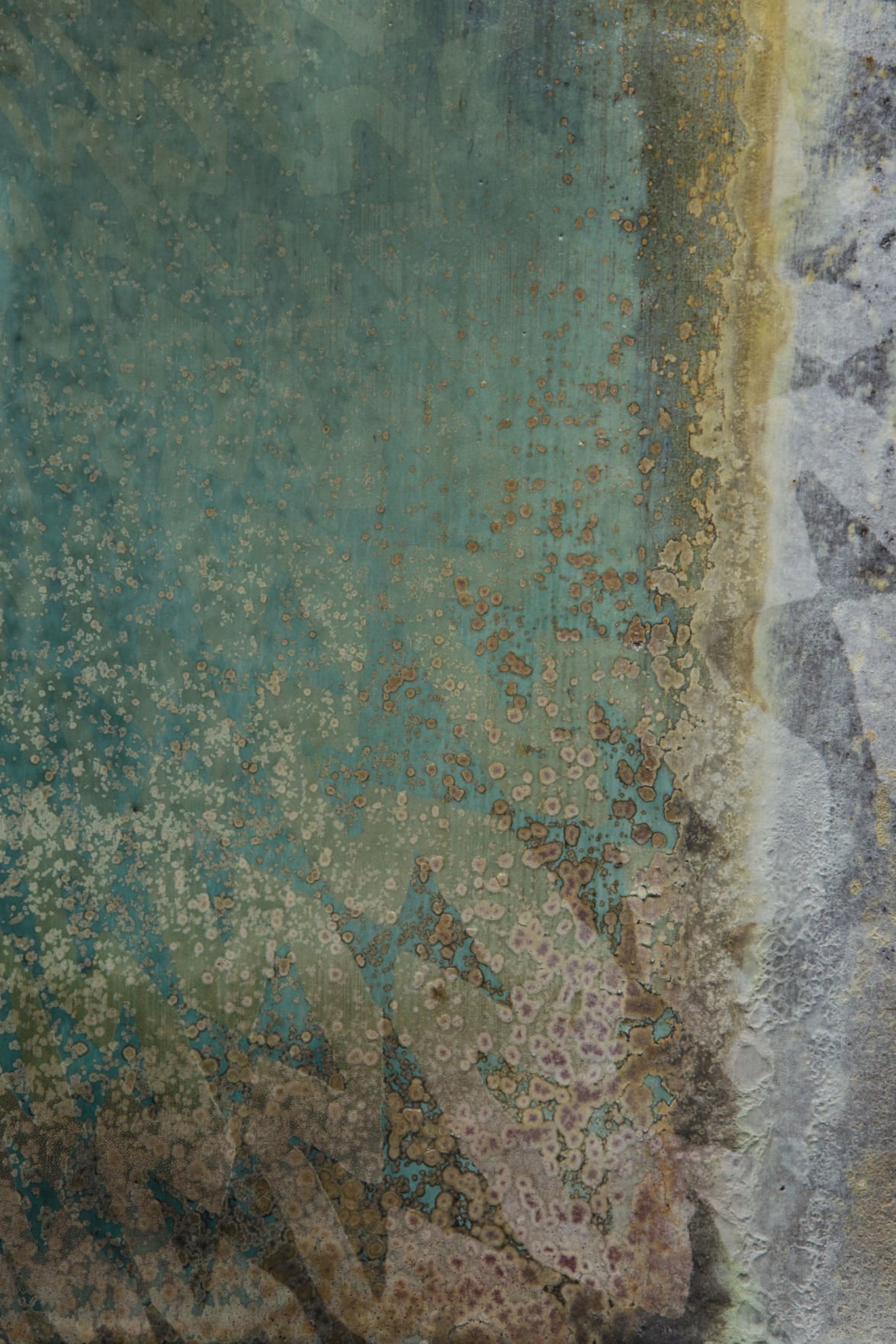 When French surrealist painter René Magritte presented an image on canvas of a tobacco pipe in 1929, he included a caveat, writing “Ceci n’est pas une pipe” underneath the oil paint depiction. This is not a pipe. In painting a picture of the object, the painting does not become the object; one cannot put tobacco in the painting. In much of the same vein, Marshall Maude is presenting his new exhibit of ceramic works, titled “Return,” which largely is about the theoretical ideas of objects and the connections they build rather than the objects themselves.

“I think of it more as sculptures of pots, or paintings of pots,” he said. “I’m not thinking about what they could hold. The viewer hopefully can put themselves into it in a way but I’m really more interested in the tradition and this continuum of makers.”

His inspiration for the pieces in “Return” comes from ancient potters throughout Greece, China and more. In recent years, Maude has traveled for work in Korea and China, serving as an artist-in-residence in the latter, and learning about the different cultures.

“I like the idea that I can have a connection with somebody in another country, we don’t share a language but we share a language through this process,” he said. “I had those experiences where I was able to work with ceramics artists (in Korea and China) and we understood each other, we could work really efficiently together even though we had no shared language.”

Maude earned his bachelor of fine arts degree from the University of Kansas and is currently an associate professor of ceramics at the university, but he also has a connection to Flagstaff—he attended Northern Arizona University from 1998 to 2000 as a post-baccalaureate student specifically to study ceramics under Professor Don Bendel and use the rare Tozan wood kiln—one of only three in the world—located at the studio.

In his various pieces that make up the exhibit that range from amorphous sculptures to Roman-inspired pots, Maude experimented with different firing and glazing techniques to create unique colors and textures.

“I believe the most fundamental questions, those of origin and finality that humanity asks itself are unanswerable, yet this inquiry is central to every aspect of our lives,” Maude said in his artist’s statement. “With every discovery, new questions arise and the mysterious expands.”

“This great paradox fascinates me and resides at the core of my work,” he continued. “I make ceramic sculpture that explores this paradox not to answer, but to illustrate in physical form the power and significance of inquiry itself.”

The exhibit’s opening reception will be held Thursday, Nov. 2, from 5-7 p.m. in the NAU Art Museum, 620 S. Knoles Dr. Admission is free and open to the public during the museum’s hours, Tuesday-Saturday from noon-5. The exhibit will stay up through Dec. 1.

'We don't have a plan' to shoot down Chinese rocket: Pentagon chief

'We don't have a plan' to shoot down Chinese rocket: Pentagon chief

Marshall Maude, left, adjusts one of his pots in a series titled "These Vessels Hold" ahead of the "Return" exhibit's opening reception on Thursday.

These Vessels Hold, by Marshall Maude.