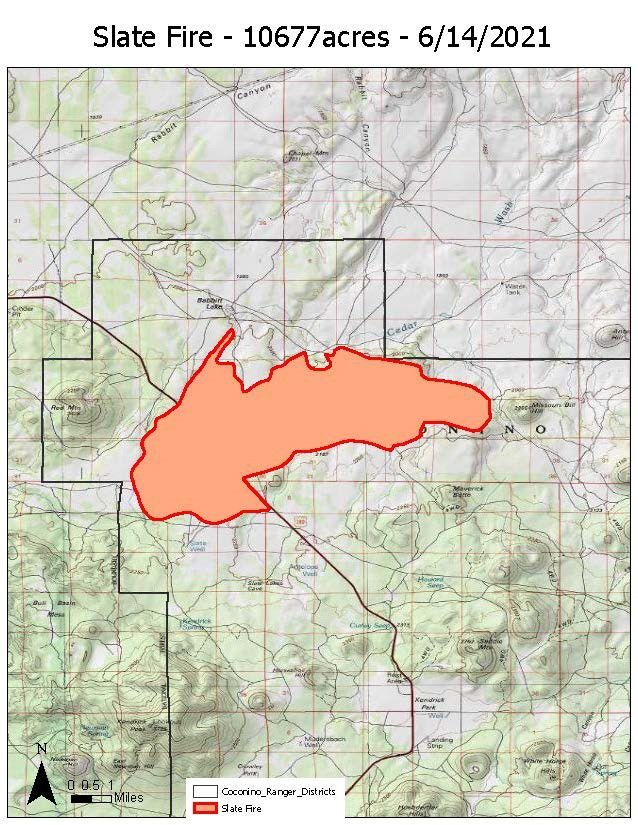 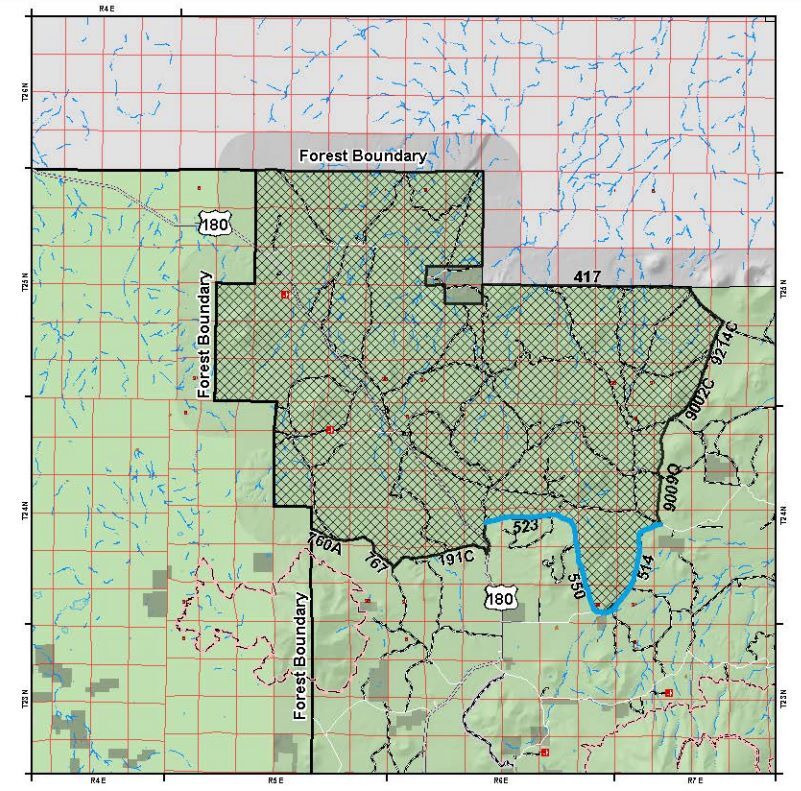 As work continued on the Slate Fire northwest of Flagstaff over the weekend, the Coconino National Forest and State Forestry Department found themselves responding to yet another wildfire south of Sedona on Sunday.

The Cornville Fire appears to have originated on the Coconino National Forest, but quickly moved onto state land and did pull some resources from the Slate Fire.

The Slate Fire also grew over the weekend, but so did the fire’s percentage of containment. The fire is now believed to be about 10,600 acres and 23% contained.

Largely pushed by the wind, the Slate Fire has moved east-northeast throughout the last few days.

Despite speculation late last week that Highway 180 could have its closure lifted, the road remained shut down over the weekend. According to forest officials, the Arizona Department of Transportation needed to rebuild some guardrails and remove trees that were killed by the fire along the route. ADOT announced that the highway was reopened on Monday night, with speed limits reduced to 35 mph until further notice.

Other areas of the Coconino National Forest near the fire were also closed to the public on Saturday.

The large section of forest includes an area south and east of the Coconino Forest boundary, and north of both forest roads 523 and 191C. Shaffer said those areas of the forest were closed to protect the public as firefighters operate in the area.

Crews plan to spend the early part of this week securing existing control lines as well as conducting surveys of heritage and cultural sites in the area. Crews also plan to keep a watch out for spot fires that may spark south of control lines, and will perform bucket work with helicopters on scene as needed, depending on how spot fires behave.

Flagstaff Ranger District Archaeologist Pete Wisniewski said the cultural surveys they are conducting are to ensure dozers and hand crews are not inadvertently destroying sites as the build fire lines.

“We’ve had some resource advisers out there since day one of the fire attempting to get ahead of the proposed dozer line activity,” Wisniewski said though a spokesperson. “A lot of sites aren’t fire sensitive, we’re not really concerned about them burning over, and they’ve burned over probably dozens of times since they were created.”

The Cornville Fire was called Sunday afternoon, spotted on a section of the Coconino National Forest east of Cornville, and soon had forced the Yavapai County Sheriff’s office to call for evacuations of some areas.

Arizona State Forestry spokesperson Tiffany Davila said homes east of Page Springs Road, including the Mingus Panorama Subdivision, were evacuated for several hours until wind caused the direction of the fire to shift.

That allowed the Yavapai Sheriff's Office to lift all evacuations by 8 p.m. Sunday night, allowing residents who had left to return to their homes.

Fire managers estimate the fire to be 1,200 acres in size, although they hoped to have a more solid acreage count after a flyover of the fire planned for some time on Monday.

The fire is currently burning away from populated areas northeast of Cornville, and into more rugged terrain that may make fighting the fire in that area more difficult.

As the fire moved onto state land, the state Department of Forestry had been taking the lead in combating the fire. But Davila said a type 3 incident management team from the Coconino National Forest is set to take over. That is the same kind of team managing the Slate Fire.

Over a week since the Slate Fire north of Flagstaff closed Highway 180, the road has finally reopened. It was initially closed June 7 as the S…