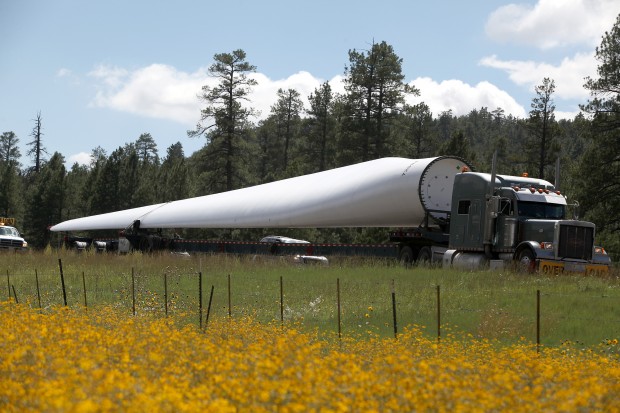 A giant wind turbine blade makes it's way north on Interstate 17 just south of Flagstaff Tuesday. A convoy of semis were heading north with blades and tower sections for the wind turbine. (Jake Bacon/Arizona Daily Sun) 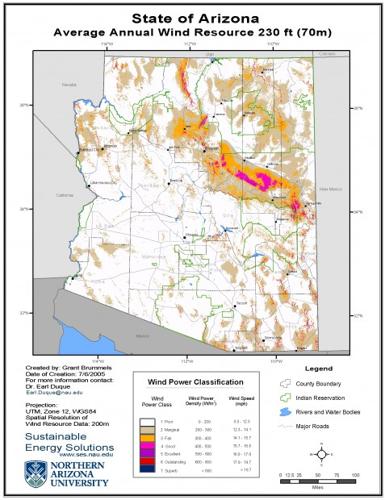 The developer of Arizona's largest planned wind farm is also testing the breeze across a much larger swath of northern Arizona.

Florida-based NextEra Energy Resources is asking Coconino County officials for permission to install wind-measuring towers on ranch lands north of the San Francisco Peaks, and west and southwest of Valle that span hundreds of thousands of acres.

A spokesman for the company said that, for the moment, it's only focused on installing 62 turbines across 20,000 acres northwest of Williams in 2011. The project is called Perrin Ranch.

He declined to discuss other plans.

The 99-megawatt development would be the biggest wind farm in Arizona and the first in Coconino County. Each turbine would stand 405 feet tall.

WHERE IS OFF LIMITS?

But some members of the county's planning and zoning board look to the future, asking: Where are good places for wind turbines, and where -- if anywhere -- should they be off limits?

She opposes putting wind-testing towers in areas she wouldn't want large wind turbines, such as in scenic areas.

The planning commission voted last month to delay the approval of wind-testing towers.

"For wind farms, we absolutely go out and look at the site and consider whether there'd be detrimental impacts to it," said Commissioner Grant Cooper.

What the public thinks, and whether Arizona Game and Fish thinks the towers would kill raptors, are other important considerations for him, he said, but he wants renewable energy.

Commissioner Sat Best ponders what the county should do if the developer proposes to put these towers a few miles from the highway leading from Williams to the Grand Canyon.

He raises the word "viewshed," which was often heard during a debate about whether wind towers east of Flagstaff along Interstate 40 would interfere with property owners' views of the Peaks.

"It's a tough one because we all love wind power and we all love the Grand Canyon viewshed, and we need to strike a balance," he said.

There's no one yardstick for what wind turbines the county would approve or deny.

"The more the public jumps in here and pipes up, that would be great," Best said.

The wind-testing towers NextEra is seeking would be located between Valle and Gray Mountain on Babbitt Ranches, 20 miles west of Valle, and about three and 7 miles west of State Route 64, north of the communities of Red Lake and Williams.

"Right now the only project we have is the Perrin Ranch project," said Steve Stengel, of NextEra.

To build the wind farm, NextEra also would need clearance from the Arizona Corporation Commission.

The panel would ask about the environmental impacts of the project, and whether NextEra had an agreement in place to sell power, said Arizona Corporation Commission spokeswoman Rebecca Wilder.

Wind farms have been proposed along Interstate 40 east of Flagstaff, near Cameron, and elsewhere, but none has been built to date.

They have sometimes lacked purchasers or financing, and tribal government permission in Cameron.

NextEra is a large wholesale power provider that already has a contract to sell the power produced on the Perrin Ranch northwest of Williams to Arizona Public Service.

The Perrin Ranch wind project would be enough to supply about 25,000 customers.

The company told investors that it planned to build enough wind energy this year nationwide to create 10 wind farms the size of the one proposed in northwest of Williams.

If this one is built, about 200 or 250 construction workers would be involved, followed by 8-10 long-term employees, Stengel said.

The contract to sell power would span 25 years.

Utilities across Arizona are supposed to be supplying 2.5 percent renewable energy as part of their mix this year, and that requirement increases to 15 percent in 2025.

The business is owned by the same parent company that owns Florida Power and Light, and it has built wind turbines in states for the last 20 years, Stengel said.

At the same time various states are pledging to use more renewables, NextEra is finding a niche by supplying that power in bulk.

"We believe that at some point in the future, there will be a price on carbon," Stengel said.

The Inner Basin pipeline, which carries Inner Basin spring and well water into the Cty of Flagstaff’s water treatment and distribution system,…

Flagstaff police are investigating the death of a motorcyclist following a crash on Interstate 40.

A 56-year-old Flagstaff man was killed Wednesday night while crossing the road near Motel 6 on East Butler Avenue. The crash happened after dark.

A 23-year-old Flagstaff man is behind bars-- the primary suspect in a midnight shooting at an apartment complex on Beaver Street. Police belie…

Wednesday will be the start of the school year for kids across Flagstaff, including at Flagstaff Unified School District (FUSD). For those att…

A giant wind turbine blade makes it's way north on Interstate 17 just south of Flagstaff Tuesday. A convoy of semis were heading north with blades and tower sections for the wind turbine. (Jake Bacon/Arizona Daily Sun)